Preview: The Milan-San Remo podium contenders split their preparation into two camps, those participating in Paris-Nice and those opting for Tirreno-Adriatico. PEZ examines these two races to determine which one is the best indicator for success in the sprinters’ classic.

With so many riders coming into form and showing early success this season, it is easy to see why Milan-San Remo promises to be one of the more exciting races of the spring classics this season. Mark Cavendish, Tom Boonen, Fabian Cancellara and Peter Sagan are just a few of the pre-race contenders who have claimed decisive victories in preparation for La Primavera. See Ed Hood’s excellent Contender’s Preview for a likely list of the winner.

The Course
Milano-Sanremo (MSR), often called the “sprinters’ classic” is a grueling test of endurance spanning 298 kilometers (185 miles). It’s the longest of the Classics, and there’s no way anyone wins without some serious racing miles already in the legs.

Due to the course’s mostly flat profile including the long enough run to San Remo that follows the Poggio descent, this race has typically been dominated by the sprinters. Past winners of this race include: Cavendish, Oscar Freire, Alessandro Petacchi and most recently Mathew Goss. But anyone with a fast finish and the legs to get there is a threat – like Cancellara in 2008, and Heinrich Haussler’s ‘almost’ win in 2009. 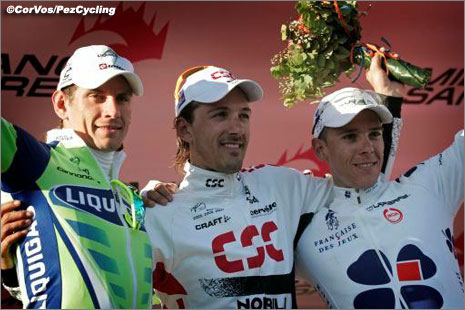 Looking for an example of a foiled sprinter party? 2008 was just that. Cancellara won it solo with Pozzato and Gilbert following just behind.

While the race traditionally favors the sprinter, the corsa also makes it possible for the fast flat-landers to be foiled by well-timed attacks and strategic positioning, especially on the last climbs of the Cipressa & Poggio. By here, the pretenders have usually been dispatched by one of the accelerations that always come when the race hits the short tough climb of La Manie at 100km out, and then on the treacherous “Capi” located in the final 50 kilometers of the race along the Ligurian coastline – the five arduous “bumps” individually named Capo Mele, Capo Cervo, Capo Berta, Cipressa and Poggio. 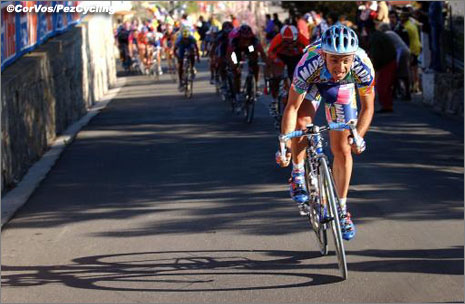 Paolo Bettini made it a spring-time ritual to attack on the Poggio, but he only succeeded once – in 2003. This is from 2002, one of the failed efforts.

Tactical placement at the front of the pack and a well timed attack on the Poggio has potential to stay away through the finish (Bettini in 2003) but these moves are less frequent in the modern era. Recent years have seen a select but sometimes large group charge into San Remo to duke out the sprint, but getting into this group is no easy feat.

Choose Your Weapon Wisely
It’s no secret the two popular pre-Primavera ‘training races’ – Paris-Nice and Tirreno-Adriatico – always deliver the winner. Both are about a week in length, and held at roughly the same time, these races are held in similar esteem and have offered some exceptional racing over the years, with the 2012 editions being no exception. On the eve of one of the most prestigious of the spring classics, the question remains as to whether the Race to the Sun, or the Race of Two Seas offers better preparation or an indicator of success.. 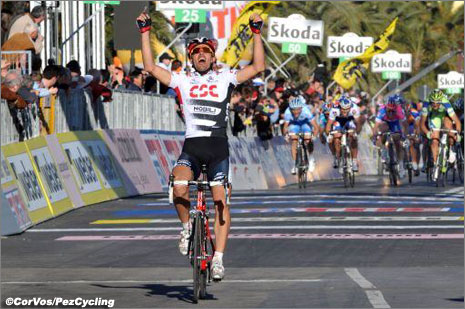 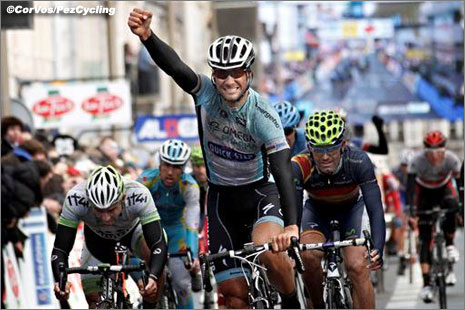 Boonen used Paris-Nice as his preparation race this year. One should also note that his biggest goals lie in Belgium, and there’s no lack of crosswind, gutter loving fun in Paris-Nice – this stage win was a prime example.

Overall contenders notwithstanding, the question is which of these races provides the better indicator of success for the pre-race favorites at Milan-San Remo. The first place to look is the starting line of these races. This year’s Paris-Nice included notables Boonen, Mark Renshaw, Thor Hushovd (now out of MSR due to sickness), Gregory Henderson, Simon Gerrans and Haussler. Haussler and Hushovd rounded out the Milan-San Remo podium in 2009 behind Cavendish while Boonen took second behind Freire in 2010. The 2011 Paris-Nice edition saw Milan-San Remo’s eventual champion Goss at the start line along with contenders Peter Sagan, Robbie Hunter and Haussler. 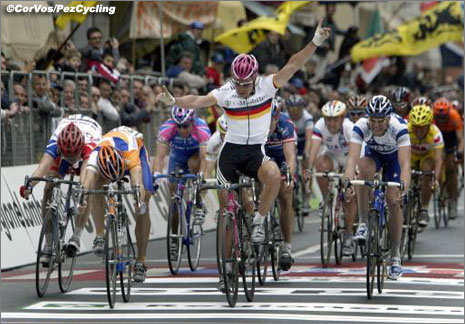 Oscar Freire is a perennial threat in Sanremo…even to a rider who had the race sewn up. Poor Zabel. This shot always makes me shudder.

Tirreno-Adriatico in 2012 on the other hand places perennial heavyweights on the start line such as Cavendish, Farrar, Freire and Andre Griepel to name a few. The race also included Cancellara and Philippe Gilbert, both of whom also started the race in 2011 and later came in second and third respectively at Milan-San Remo. 2010’s race saw similar correlations as the entire Milan-San Remo podium was comprised of Tirreno-Adriatico participants. Alessandro Petacchi, who finished third in 2010 arrived in good form having placing second on two stages at the race of two seas. If past results are any indication, both Cavendish and Sagan who secured stage victories this year are certain to be on peak form for the sprinter’s classic. 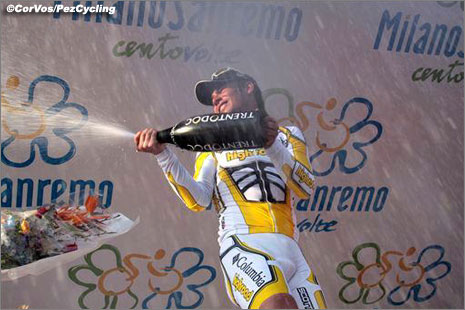 Mark Cavendish has one win to his credit. Can he make it two this weekend?

Since 2009, six of the top podium finishers of MSR rode Tirreno-Adriatico, while only three have come from Paris-Nice. The 2-1 disparity comes into sharper contrast when one considers that these six riders have had consistent success on the Lungomare Italo Calvino. Cancellara and Freire have enjoyed repeated podium success while the others have maintained respectable results and are repeatedly considered top contenders. By contrast, those in the Paris-Nice preparation camp have enjoyed success sporadically and sometimes unexpectedly. Haussler, who routinely participates in Paris-Nice has not seen the same level of success at Milan-San Remo that brought him second in 2009. 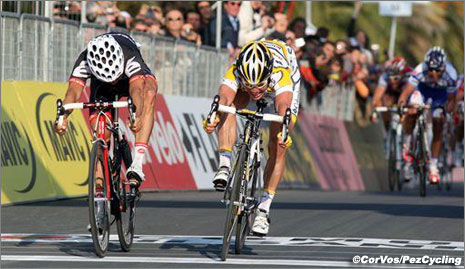 The 2009 edition was truly unforgettable with Cavendish just getting Haussler on the line.

While Goss’ stunning victory last year signaled the sprinter’s coming of age of sorts, many opined that his win was more of opportunity than by design with pre-race favorite and future green jersey winner Cavendish also lining up for HTC (of course, by design or not, it was against a TOP class set of riders in Sanremo). While Haussler’s subsequent misses can likely be attributed to an extended recovery from his 2010 crash with Cavendish at the Tour de Suisse, Goss has modified his race calendar in preparation for his Milan-San Remo defense by opting for the traditional route with Tirreno-Adriatico. 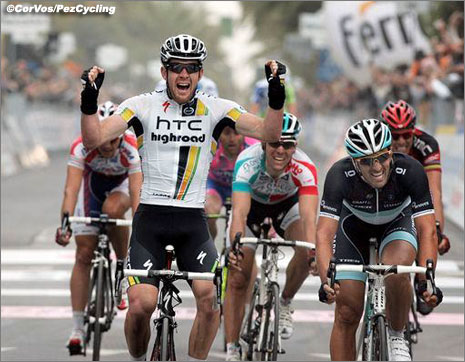 Matthew Goss was perfect in 2011. He survived the crashes, the climbs, and the attacks, and when it came time to win the race, he had more than enough to put the likes of Fabian Cancellara, Philippe Gilbert, and Filippo Pozzato behind him.

This is likely the reason why other riders who are now coming into their own like Sagan have switched to Tirreno-Adriatico. Of the consensus favorites for podium contention this year, only Boonen and Haussler took part in Paris-Nice. Goss’s victory last year following Paris-Nice might provide some encouragement for Haussler whose bunch sprint for third place on stage six of Paris-Nice was impressive considering his positioning at the time he launched. That being said, history shows to be on the side of those riders not competing at Paris-Nice. Having firepower the likes of Farrar, Cancellara, Sagan, Cavendish, Freire and Griepel all lining up for the race of the two seas, it’s easy to see why Tirreno-Adriatico has been considered the best Milan-San Remo preparation. It will be interesting to see whether 2012’s Milan-San Remo winner proves to be rule or the exception when it comes to race preparation.

Seeking SanRemo: The Duel To Via Roma!