Roadside Antwerp is the diamond capital of the world. It was a bit too chilly for the ladies of the town to be flashing their finest jewellery, but there was plenty of glitz and glamor as the fastest men on two wheels went head-to-head for the Grote Scheldeprijs. With the most sought after gemstone as a prize, Cav, Kittel and co. all showed up, and Pez was watching.

The drive from Brugge to Antwerp is not a long one when anticipating a showdown between some of the quickest finishers in the sport; and it’s even shorter when, for once, there’s going to be a VIP bracelet around my wrist.

Not only does it guarantee access to the very popular breakfast buffet at the race start; it also means a seat in the finish line gantry in late afternoon when the race comes thundering back into Schoten.

The Fabster has shown up, and looks absolutely freezing on the presentation podium, as he tries to explain just why he hasn’t taken his wife shopping in Antwerp. The banter is a bit stilted, but when Movistar arrive, the announcer gives up trying to pronounce their names altogether and lets them introduce themselves.

Around the buses, there’s the usual mechanics’ hustle, but the riders are slow to show. It’s a more relaxed affair than Flanders or Roubaix, but no-one wants to stand around and risk a cold. 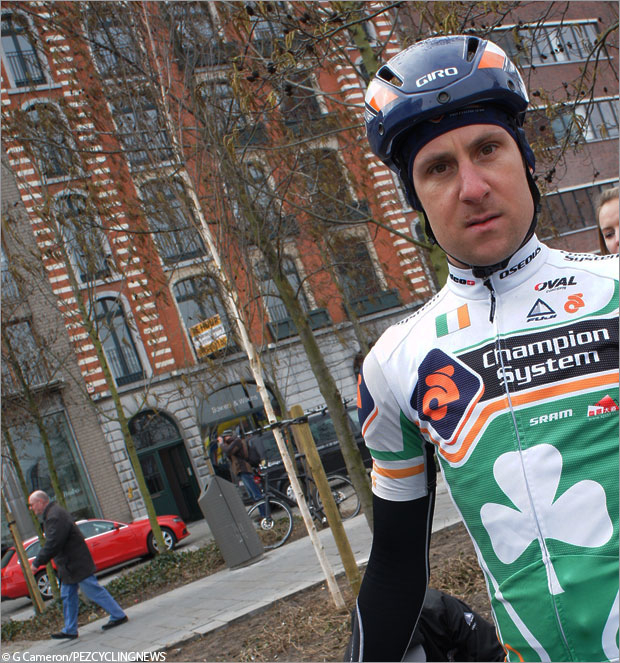 Matt Brammier, the Irish champion, was not for chatting but posed for a picture, before making excuses and disappearing back into the bus. He’d keep warm in a different way later on. 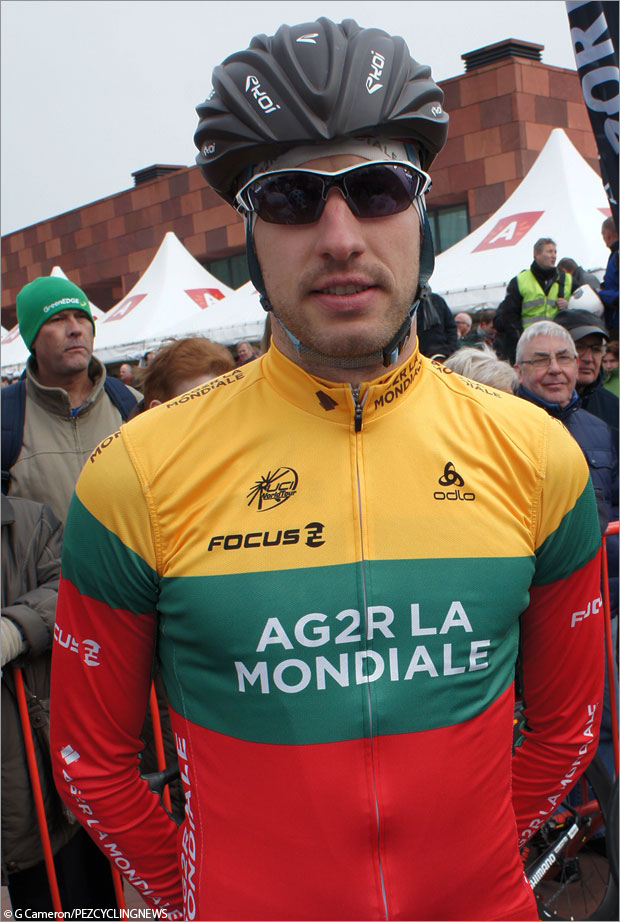 Lithuanian champion Gediminas Bagdonas sports one of the nicest, simplest kits in the peloton, and is a friendly guy to boot. Today’s job was to work for his Belorussian team leader Yauheni Hutarovich, who has nailed a few good wins with his turn of speed.

The FDJ guys look a little less thrilled to be standing waiting to sign on. They try the tactic of staying resolutely stock still, in hopes that the wind doesn’t notice them. 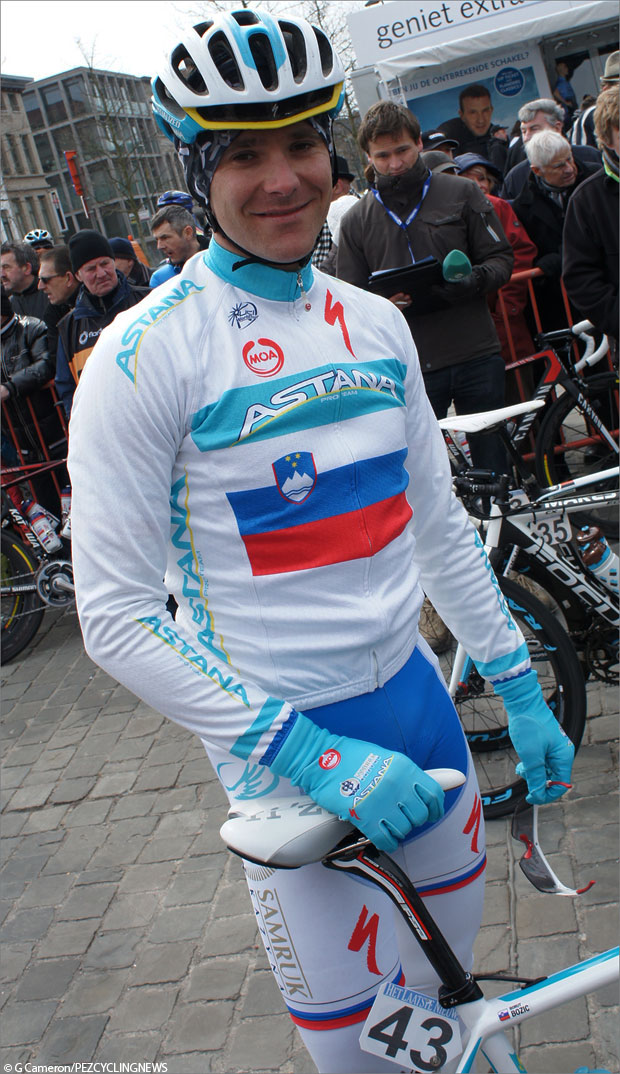 Pez pal Borut Bozic was in fine form, though, as I continued my quest to interview anyone who’s surname began with ‘B’. “Today is about staying out of trouble, staying loose. It’s all really about Sunday … and the cold is OK. You have to get through it. And we’re in Belgium, so what do we expect?! But, yeah, it’s all about Roubaix for me.”

Will you go for a sprint? 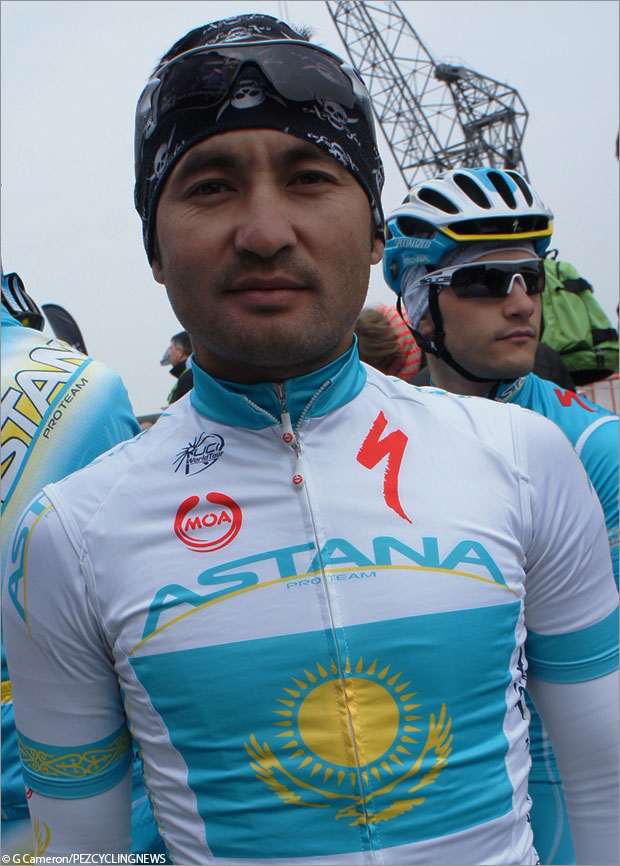 Lurking just down the road was his Kazakh team-mate Assan Bazayev. Will he work for Bozic in a sprint? “Maybe”, he laughs. “What’s so funny?”, Bozic asks as he wheels past. Bazayev grins. “If Borut is there, we’ll work, but maybe also for Guardini, our other sprinter.” 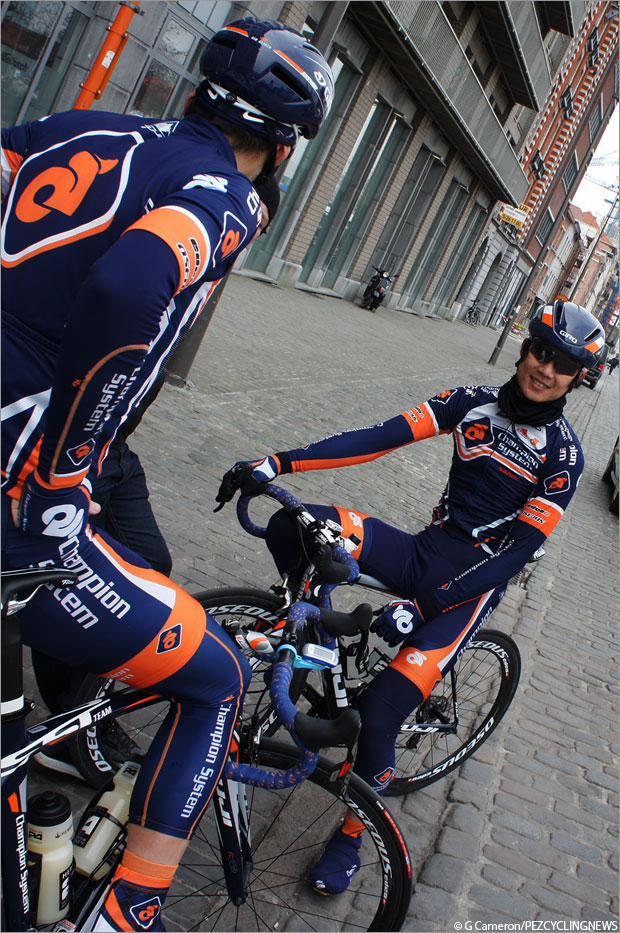 Champion Systems have Hong Kong’s Kin San Wu in the line-up today, and the conditions are very different from back home. He obliged me by removing his face mask before saying: “In Hong Kong, its already 25 Celsius, so this is hard to get used to. It’s so important to stay warm, to avoid breathing problems.”

How about the cobbles?

“Well, they’re not a lot of fun …” He was smiling as he said that, I think. He’d pulled the mask back on.

I’m still travelling with Velo Classic Tours, who have organised first-class access, and a race vehicle pass to allow us to jump into the race convoy and head for our first rendezvous with the riders out near Meer.

I’m gassing away with Peter Easton, and the break is upon us before I realise. They fly past into a howling headwind, with Matt Brammier on the front, his team-mate Mart Ojavee, and Kamyshev of Astana, too. 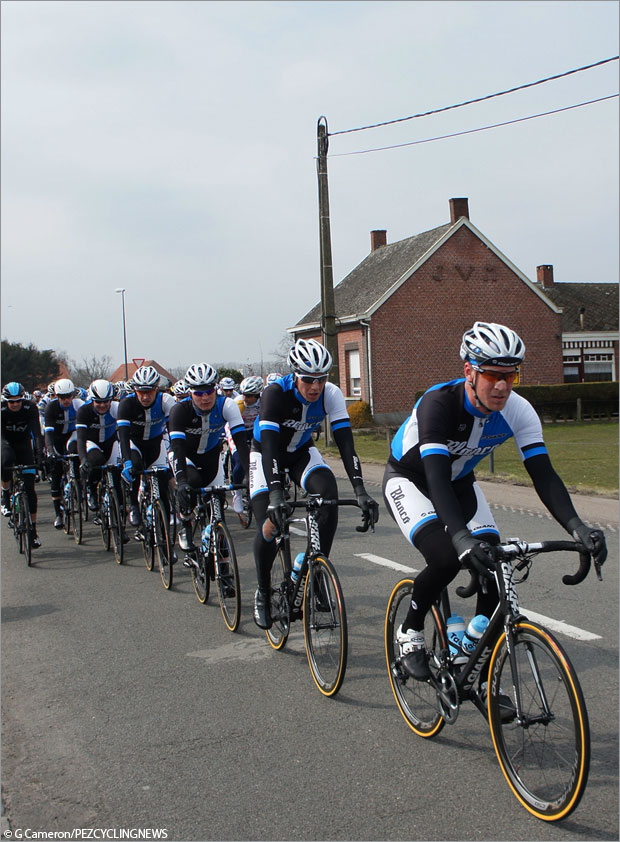 The gap to the field is not long, maybe a little over a minute. Like so many of the other spectators on the corner. We race back to the van and retreat along the road. We grab our sandwiches as we wait to see the riders again.

What’s interesting is watching the interaction in the peloton at this early stage of the race. There’s a lot of chatter between friends. The pressure hasn’t gone on yet. A break is going clear: with Roubaix on Sunday, Boonen injured and Cancellara looking dominant, the bigger teams are happy to see an escape.

At Hoogstraten, it’s still Matt Brammier on the front, charging off a roundabout with the rest scrambling for a wheel. Lose it in this wind, and you can forget it …

The gap to the field is out towards three minutes now as the field limps into view. It’s in pieces, two large groups, with three smaller ones in the middle, and stragglers off the back. It’s a hard, fast race. 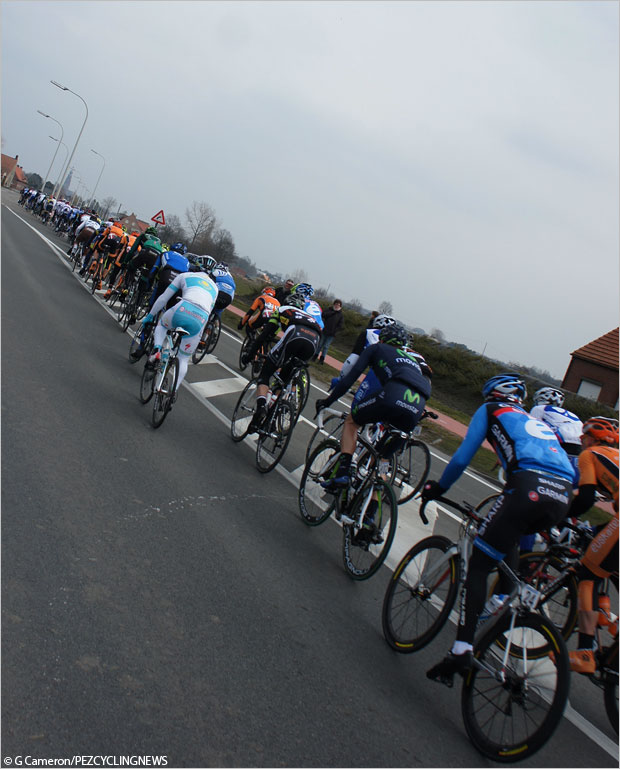 I see Bozic and Bazayev more or less together as the peloton streams through. Garmin-Sharp are working for Tyler Farrar; Blanco have eyes on Theo Bos. Cavendish is hidden, safely. 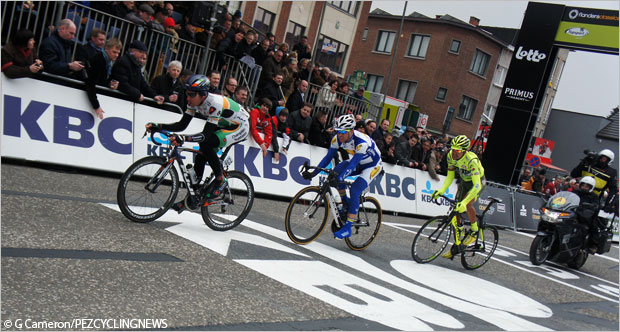 Now, it’s time to head into Schoten to catch the rest of the event from the VIP tribune, which is parked about ten meters past the finish line. I’ve often wondered, as I stand roasting outside at the Tour de France just what it would be like to get inside …

The young guys on the security gate wrap a red band round my wrist and I’m still expecting someone to say: “Nee!” Up the steps, out of the freezing wind and into the warmth. There’s beer on tap, but everyone in the VCT party is more stunned by how close we are to the action.

Under-23 riders stream past beside us as their event comes to a conclusion.

The action arrives on local TV, so we can check the race before stepping outside to see Brammier lead the break through with 48 kms to ride. 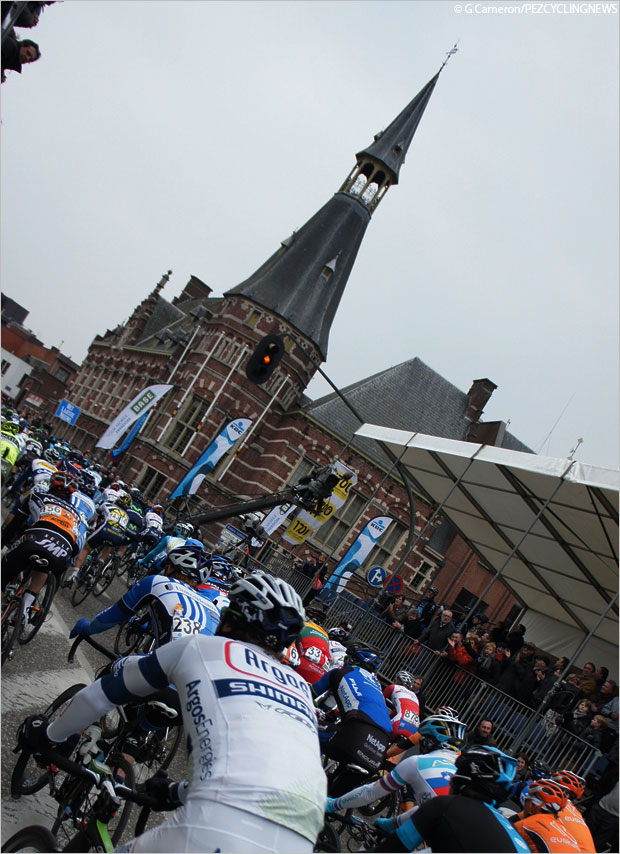 The field is close, just letting the remaining trio of escapees suffer. They swish through, take a left and turn out of the city again. 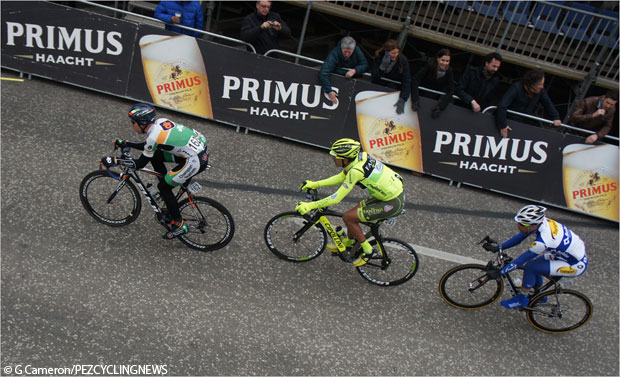 Incredibly, Brammier is still on the front when the break comes through to start the penultimate lap with 32kms to race, but it won’t be long before the big boys come out to play. 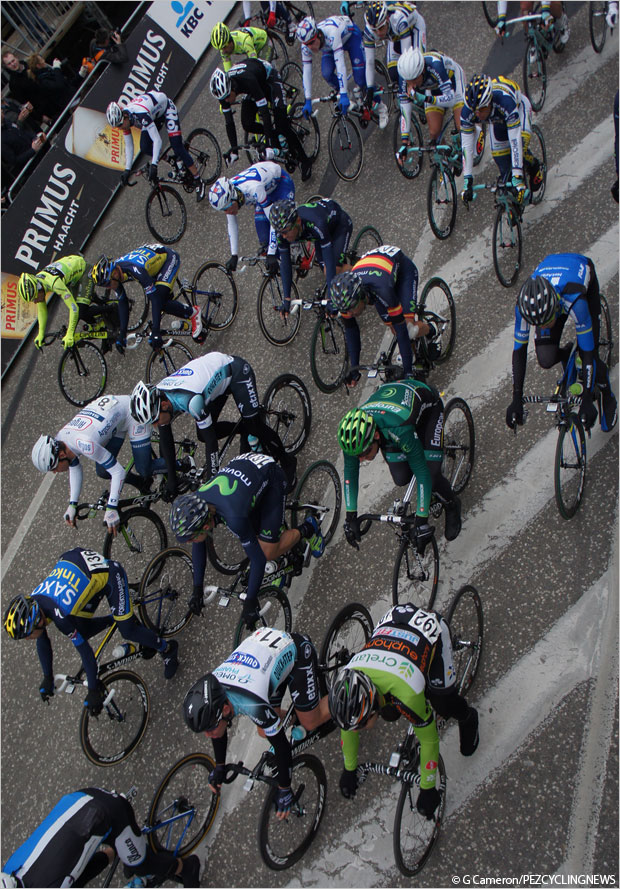 On the bell lap, it’s all together. Mark Cavendish is sitting in the middle of the peloton. Having won this race three times before, he’s looking to break Piet de Smet’s all-time record and he wants a diamond for his daughter’s birthday present. 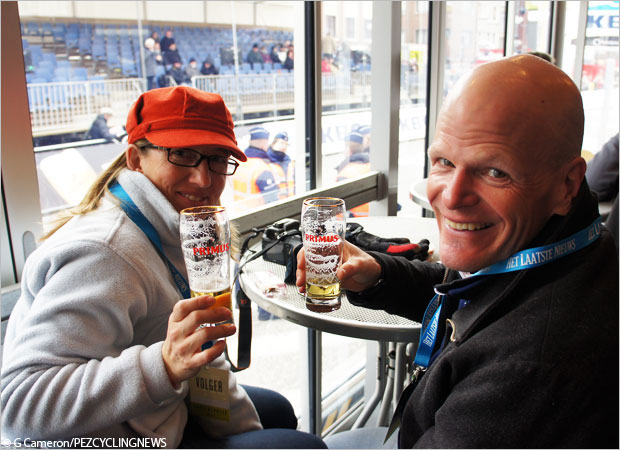 I have time to enjoy a beer with Peter and Lisa Easton of Velo Classic Tours, who’ve set up such incredible experience for their clients, before climbing up to the top of the tribune to await the sprint. I pass the time watching the street below, where the drunkest woman in Belgium fights the elements, gravity and her fellow humans in a doomed battle to stay upright. 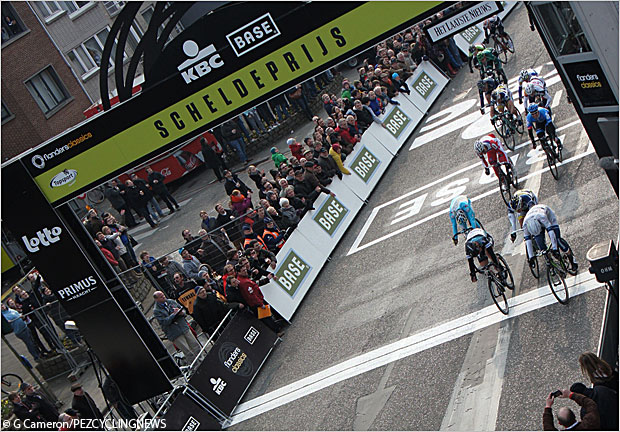 The crowd hammer the boards all the way up the finish straight; the helicopters clatter overhead; the race announcer works up to a seizure point of excitement. We can see them coming. Kittel in white; Cav’s OPQS blue/black.

There’s a huge roar as they hit the line … Kittel, just! Cav was too far back when he hit the gas and ran out of road, by about a meter. 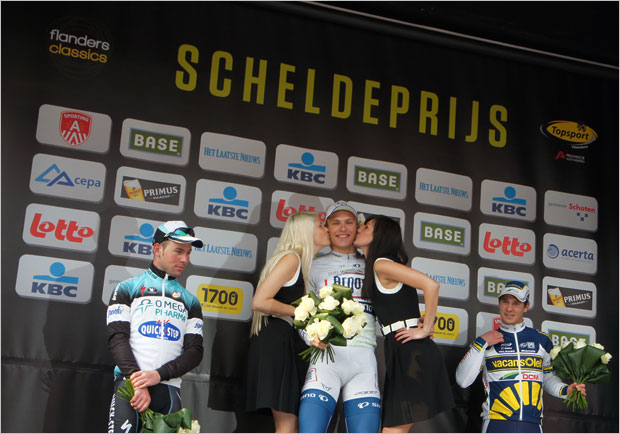 On the TV interview, Cav looks like he’s about to a) burst into tears; b) hit the interviewer; c) both. By the time he gets to the podium, though, he’s decorum personified, even cracking a few smiles as he chats to Kittel. The big German doesn’t seem to know whether he should spray the champagne or not; Barry Markus (Vacansoleil, third) doesn’t look like he knows what he’s doing there at all. 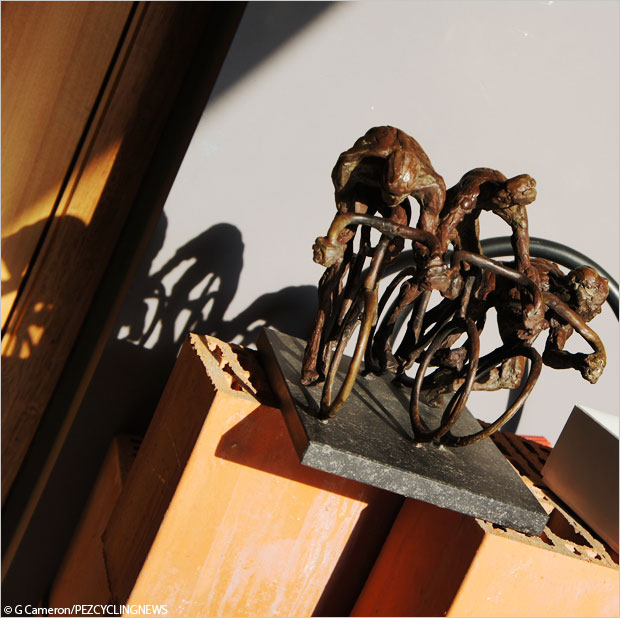 A quick trip to the press room to see what’s happening, but it’s all quiet. Kittel’s prize sits by the door, glinting like a jewel, on a gem of a day for the now two-time Scheldeprijs winner.

Thanks once again to Velo Classic Tours for organising the day so professionally.