Race Report: It wasn’t a big surprise to see a small, explosive Spanish climber on the Katusha team getting the victory but the name of the Spanish climber certainly was not who many expected.

Where The Race Was Won
After 200km of tough racing that was tightly controlled by the BMC team it all came down to the toughest bunch sprint in the business, a 1.3km grind up the brutal slopes of this mythic climb with a bunch of 40 riders to contest the finish.

Last year’s winner Joaquim Rodriguez was well positioned along with the day’s favorites Philippe Gilbert and Peter Sagan but they were all surprised by a daring attack from new Ag2r signing Carlos Betancur who went 600m from the line and instantly got a large gap. The favorites looked at each other before Gilbert took up the chase with Peter Sagan quickly cracking. Gilbert looked in trouble too as he weaved across the steep road and for a moment it looked like Betancur would be the surprise winner. Instead we got another surprise with Joaquim Rodriguez’s no.1 henchman, Daniel Moreno launching a solo bid for glory. 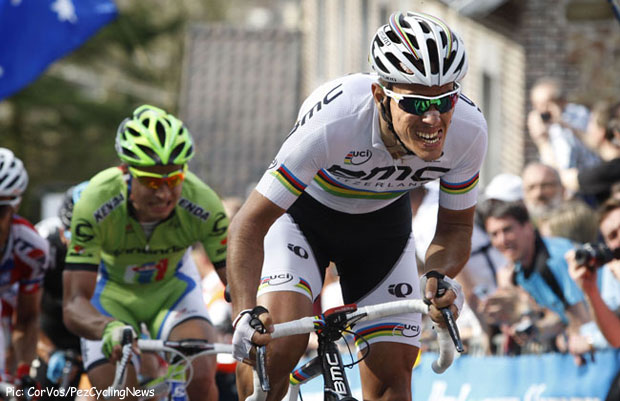 Moreno quickly distanced the struggling Gilbert and raced across to – and straight past – Betancur with 100m to spare. Betancur by this stage was dying a thousand deaths and was desperately pushing his way to the finish line and a possible podium place but his compatriot Henao (SKY) passed him to take 2nd and Dan Martin (Garmin-Sharp) almost did the same. It had to go to a photo for 3rd but Betancur held on for a well deserved podium spot with Martin just missing out after starting the climb too far down. Repeat victories for Katusha and Spain but a surprising podium all round. 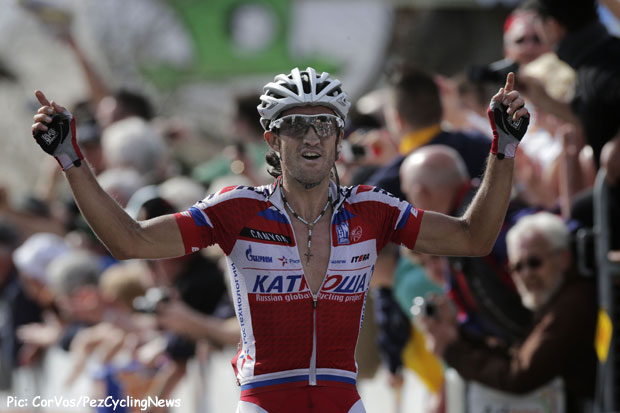 How It All Started
Gille Devilliers (Crelan-Euphony) & Pirmin Lang (IAM) were the first to successfully escape the peloton’s clutches after 20km with the experienced Jurgen Van Goolen (Accent Jobs-Wanty) bridging across to the pairing solo to form the day’s early break. The peloton was happy with this composition and essentially let them go with the trio building up their gap to a maximum of almost 10 minutes before SKY and BMC started to put some troops on the front in a more serious chase.

It was BMC in particular doing most of the work in the chase hoping to set up Philippe Gilbert for the win with Movistar also doing a bit of work in the interests of Alejandro Valverde. With the combined work of these two squads and the taxing nature of the race the gap steadily dropped to the break until it was completely wiped away 45km before the finish.

The next brave souls to have a go were Laurens Ten Dam (Blanco) and Romain Bardet (Ag2r) but it was BMC once again who didn’t give this new pairing much leeway. With the penultimate trip up the Mur de Huy just around the corner their gap never got higher than 30 seconds and when they hit the famous wall Bardet chose his reverse gear instead of the 39×25 and quickly went backwards. One man who did go forwards and very effectively so was Argos-Shimano’s Simon Geschke who rocketed out of the peloton, quickly crossing the gap to TenDam and taking the 250 Euro prize for cresting the Mur first. It’s not the little prize that he was after though and he continued to push on hard with TenDam to try and build the gap over the still BMC led peloton. 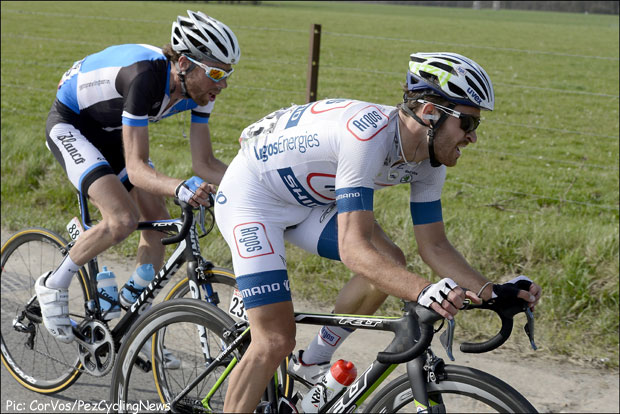 With 15kms to go Vacansoleil’s perennial attacker Lagutin had a go and tried to get across to the pair and for an ever so brief moment we even saw Andy Schleck at the front!  5kms later though Lagutin was caught having never made the junction and Andy Shcleck went from being at the front of the peloton to quickly dropped on the 2nd last climb of the day, the Côte de Villers-le-Bouillet.

The riders going out the back door was where the action was on this climb rather than at the front of the peloton as apart from the brave duo out the front finally being caught not much action occurred. The pace from OmegaPharma-Quickstep and BMC was simply too high for anyone to get away and so the race was all together approaching the finish with a peloton of around 40 riders ready to contest for the win on the Mur de Huy.

Arguably the best in the world at these steep finishes, Joaquim Rodriguez sent his troops to the front for the first time in the race with 6km to go to seemingly set up a repeat win for himself but instead we were all surprised by his lieutenant Moreno stepping up for a superb win. An exciting finish to a well controlled race but Philippe Gilbert and his entire BMC team must be going home disappointed tonight after the amount of work they did to come away with no result. Different tactics for Liege on Sunday for BMC? Only time will tell.