Race Report: The cobbled races started today with the 2014 Omloop Het Nieuwsblad and it was a classic battle in terrible weather that came down to the sprint between two hardmen of the peloton, Ian Stannard and Greg Van Avermaet.

In a race of attrition it came down to two riders…and one of them had no intention of settling for second place. The quiet man of Team Sky, Ian Stannard rode like a man possessed today and while the Belgian public looked initially towards home favorite Tom Boonen, it came down to another Belgian to provide the final competition in the sprint. With Phillip Gilbert choosing not to ride, BMC’s main man was Greg Van Avermaet and he came so close. The Sky rider though was not to be denied and took the uphill finish in style. 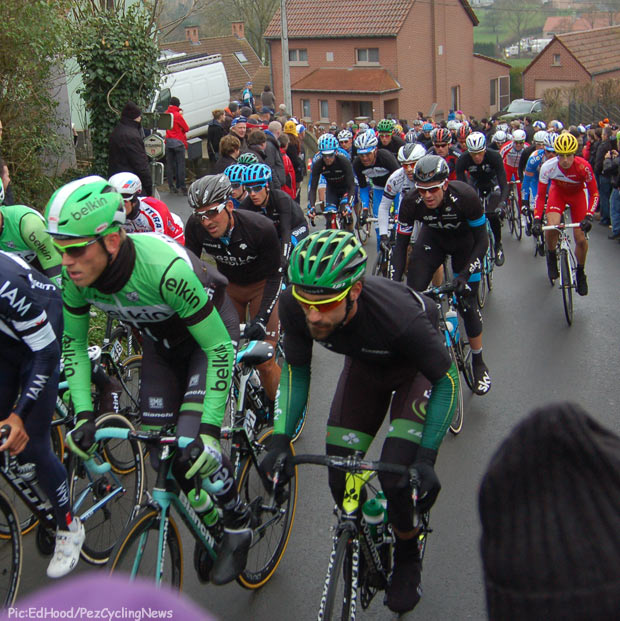 How The Day Unfolded.
The 69th edition of this semi-classic Omloop Het Nieuwsblad kicked off in much better weather than last year when lots of early-season races were affected by blizzard conditions. The riders started with relatively mild temperatures but the deciding factor as always in Northern Europe was the wind, which was quite chilly.

First Moves
There was a minute’s silence before the flag dropped in memory of the Belgian rider Kristof Goddaert (IAM Cycling) who was tragically killed while out training last month.

As the race headed out of Gent the usual skirmishes began with riders keen to show their jerseys and establish a lead group. There were a number of attacks as various riders tried to start something but the peloton was keeping a close eye so that the right composition could be let go. After 18 kms of racing a group of eight formed up and began to move away. This group contained Cyril Lemoine (Cofodis), Aliaksandr Kuchynski (Katusha), Andreas Schillinger (NetApp-Endura), Frederik Veuchelen (Wanty-Groupe Gobert), Maciej Paterski (CCC Polsat Polkowice), Stijn Steels (Topsport Vlaanderen-Baloise), Christophe Laborie (Bretagne-Séché Environnement) and Ramon Sinkeldam (Giant-Shimano). They worked well together and began to forge a lead. The peloton however was staying attentive and the Omega Pharma Quick Step team of Boonen was ensuring that everything went to plan. By the time the break had closed in on the first set of cobbles some 50 kms in to the race they had established a lead of 4 minutes.

Cobbles and Bergs
With every rider in the peloton keen to get a good position onto the cobbles and the first set of climbs the lead dropped quickly. By the time the main body of the race had passed over the steeper Leberg and then the gentler Hostellerie the lead was down to 2:25 but QuickStep were in control and not keen on catching the leaders so early in the race. They throttled back and the gap once again rose back to the 4-minute mark. Next up, the Muur of Geraardsbergen, controversially dropped from the Tour of Flanders but added in to this race to make up for that omission. However, at it turned out it didn’t have much of an effect on today’s race with the break taking it in their stride. They even pushed their lead out to 4:20 as they headed off towards the Valkenberg.

100 Kilometers to go and Upset for BMC
Over the Valkenberg with no incidents, the team domestíques headed back to the cars to stock up on extra fuel and have a final word with their DS’s. With half the race distance now covered, and approaching the second pass of the 2 kms section of the Haaghoek cobbles, things were beginning to look more serious. The big news though was that Thor Hushovd (BMC) had gone down heavily and although he was quickly back on his feet it was obvious that all was not well with the 2009 winner. Perhaps taking advantage of BMC’s woes, or just keen not to get caught behind another crash, FDJ, Sky and Giant-Shimano all began to make their way up to the front. The race was still being controlled by QPQS with the break’s lead down to 2:44. 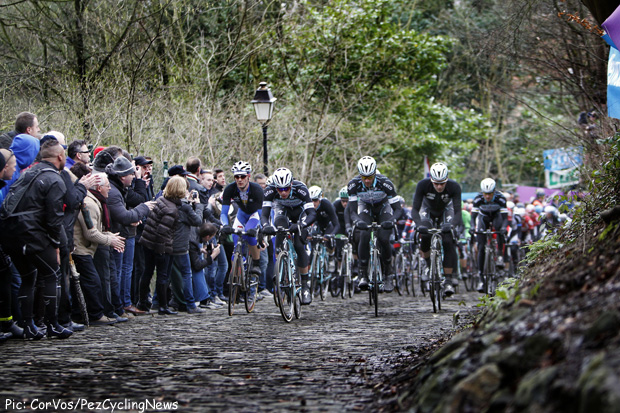 BMC announced at this point that the big Norwegian had retired so with Gilbert not riding their hopes now rested with Greg Van Avermaet and the young Davis Phinney. The break had pushed their lead out to 3 minutes but the rain was now coming down. Next up was the Kruisberg but at 9% the peloton was waiting for the Taaienberg with its 15.3% gradient. This is the traditional ‘attack’ point as it’s quickly followed by the 10% Eikenberg and then the Wolvenberg with 17.3%. Both of these bergs are short in length but steep enough that the race often fractures here.

For now though the leaders were still riding well and holding a gap as the bunch rode hard on the Kruisberg but eased off over the top.

The Big 3 – Taaienberg, Eikenberg and Wolvenberg
The wet roads were now causing problems as riders fought to keep their place and a number of small crashes saw the race spread out over a large distance. FDJ attacked and this signaled the beginning of the end for the breakaway. The FDJ attack was neutralized by Belkin and as the group approached the foot of the Taaienberg Boonen fans were rubbing their hands together. Boom! And the attack went but the only problem was that it wasn’t Tornado Tom. Vanmarcke (Belkin) put in a huge effort to steal the thunder from OPQS and moved away.

As riders scrambled to get across he was quickly joined by Ian Stannard (Sky) and Wynants (Belkin) to begin with but then more and more riders got across with Terpstra (OPQS) in the hunt. The original eight leaders were by now on the Eikenberg but their advantage over the chasers was down to 20 seconds. The rapidly dwindling main bunch was chasing hard in an attempt to remain in the hunt. The lead group had split and the latter part had been overtaken by the Terpstra group which had also gone clear of Vanmarcke.

However, it looked as if it was destined to come back together as Sky was leading the remains of the bunch. Terpstra had overtaken what was left of the original breakaway but as Sky made contact with the chasing Stannard group the quiet Englishman helped lead them towards Terpstra. More significantly, Boonen was there and he hadn’t had to use too much energy. Chavanel (IAM Cycling) made an attack but Sky kept him from getting too far ahead.

Onto the Leberg for the second time and the main group was now down to 30 riders. As they crested the top of the berg a flurry of attacks went again but Sky was still marking the moves. Up ahead, the Terpstra group had 25 seconds with 33 kms to go and when they hit the Molenberg Terpstra rode clear of the entire group. Lars Boom (Belkin) made contact and now we had two riders ahead on their own. Pretty soon though they were joined by Boassen Hagen (Sky) Demare and Van Bilsen (Topsport).

30 Kilometers To Go.
The last berg and the final set of cobbles were now behind the riders and the race appeared to be spread far and wide. Up at the front of affairs we had Terpstra, Boom, Boassen Hagen, Demare and Van Bilsen. Behind was a group of BMC riders, more OPQS and then everyone else at 46 seconds or so. Demare and Van Bilsen found the pace too high and the leaders were down to three with the BMC-led chase group holding at 45 seconds. It was now a run to the finish and with the chasers beginning to fragment, there was a real chance that the winner would come from the three at the front.

And Then There Were Two
Bad news for Boom as he punctured and although he was quickly on his way again all that he could do was join the chasers. Boassen Hagen was trying to take short turns but Terpstra wouldn’t let him away with that. They began to look over their shoulders as the gap came down but Boassen Hagen had a trump card to play. As the gap hit 20 seconds he attacked Terpstra but the strongest rider of the day so far wouldn’t let him away and soon clawed his way back. As he caught the Sky rider he passed him wide on the left and attempted to ride away but the Norwegian wasn’t finished and came back to him.

With Luke Rowe and Stannard in the chase group for Sky Boassen Hagen wasn’t going to work with the OPQS rider. Sky fancied their chances as it looked as though Boonen was no longer with the select chasers. They were no sooner caught than Ian Stannard rode off the front with Van Avermaet (BMC) hanging onto his wheel. The Sky rider was doing all the work and the lead began to climb. With 10 kms to go they had a gap of 10 seconds over a chase trio comprising Vanmarcke, Boassen Hagen and Terpstra.

Into the final 5 kilometers and the BMC rider was now contributing but they held a slender lead of 10 seconds over the three behind with the rest of the chasers another 30 seconds back.

The Finale
At 4 kms to go the winner was going to be either Stannard or Van Avermaet unless they chose to play cat and mouse in the sprint. They had no time to play with though as the three chasers had them in sight the whole time but they weren’t making any inroads on the gap. As it turned out it was the three behind who began to play around as they decided to sort out the fight for third place.

Into the sprint and Stannard held the ideal spot on the BMC rider’s wheel. He went for a long one attacking on the left and Van Avermaet fought desperately to get back to his wheel but the quiet Englishman didn’t fade and with teeth firmly gritted he crossed the line a bike length ahead of Van Avermaet. 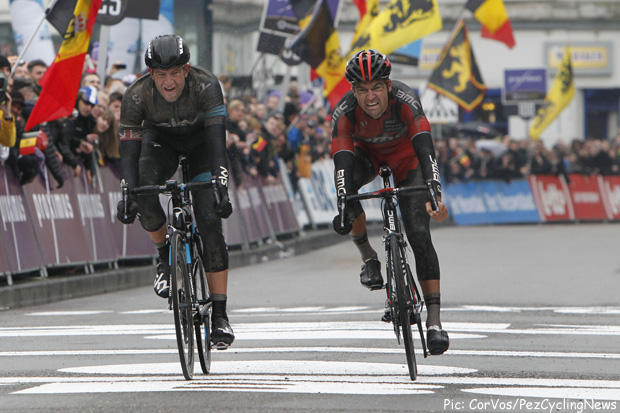 The sprint for third went to Boassen Hagen to make it an excellent day for Sky in the first event of their classics campaign. 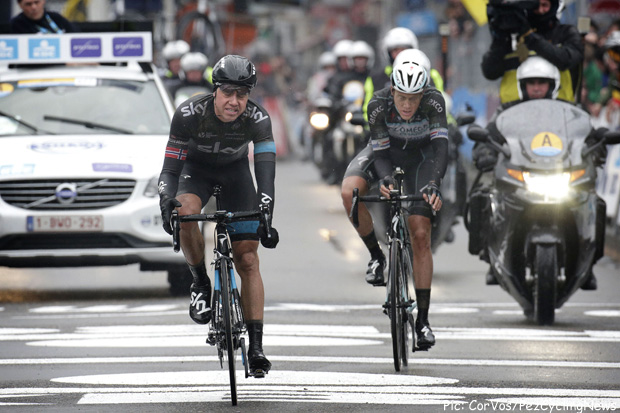 The big losers of the day were undoubtedly Omega Pharma Quick Step who in Terpstra appeared to have the strongest rider. Boonen failed to show when it mattered and although BMC can be satisfied with second they will undoubtedly be concerned at the loss of Hushovd who was showing some real promise for this year.

Keep it Pez for Ed’s Roadside Report and check back for tomorrow’s Kuurne – Brussels – Kuurne.