Pez Roadside: Taiwan really is a stunning place, and I’ve barely seen any of the island. Today’s press event was a photo and video call held by the seaside in Hualien. The sun’s heat and light was benevolent rather than oppressive as the riders’ minds turned to tomorrow’s torture.

First things first, I got to try two new things today thanks to our driver. One – a new method of shopping. Approach a roadside shack and slow your driving as you increase the volume and vehemence of your shouting. Stick a $TWD1000 note out the window. An elderly man will scuttle out and hand you your cigarettes and correct change. It takes seconds, and means minimal disruption to your day!

Then I tried Bin Lang – the betel nut, it’s the “Taiwanese Red Bull x 10,000”, a cross between candy and chewing gum. It’s a stimulant, so really good for long-distance drivers and 24-hour party people. It’s a huge part of the culture and is controversial in that ‘betel nut beauties’, scantily-clad young women, used to sell Bin Lang from roadside kiosks, but that was bad for Taiwan’s image …

… when someone spits out the red betel nut juice some people get the idea that you’ve been working so extra hard, you’re putting up blood. 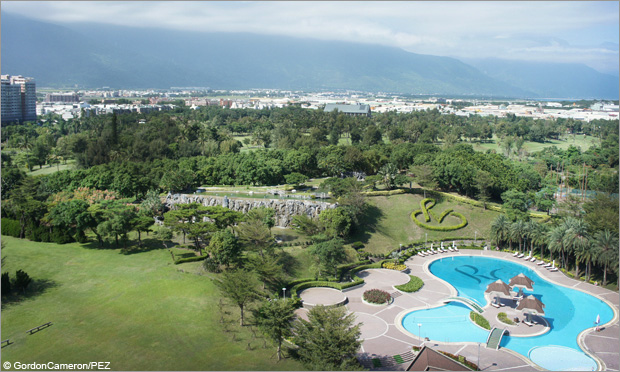 The gorgeous scenery from my hotel window managed to charm the sleep from my eyes, and the fuzzy-headedness of not knowing which time zone I’m in. It was actually even sharper in the very early morning, but then I settled for just admiring it rather than playing hunt the memory card.

The gorgeous scenery and engagement with cycling as a sport, pastime, hobby and (yes, a politically backed plan for health and commerce) managed to attract plenty of supporters and families out on a work day. The whole event was incongruously off-set by the roar of fighter jets scorching out of the air force base just behind us. F16 pilots have to train, too. 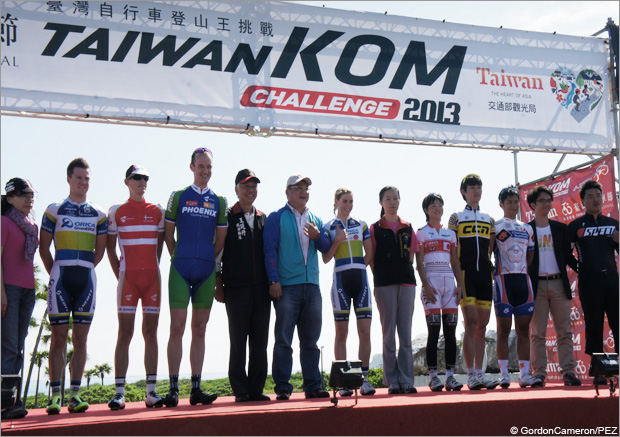 The dignitaries and MC had to shout just a bit louder into the mic than would otherwise be polite in this very well-mannered society. 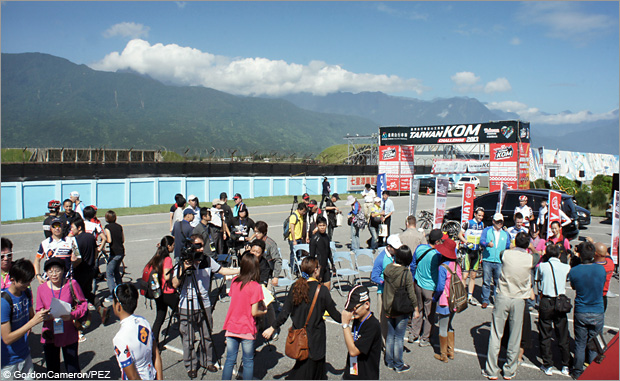 The riders are called up onto the stage before embarking on a leg-loosener up into the lower reaches of Taroko Gorge … basically the neutral zone of tomorrow’s ride. 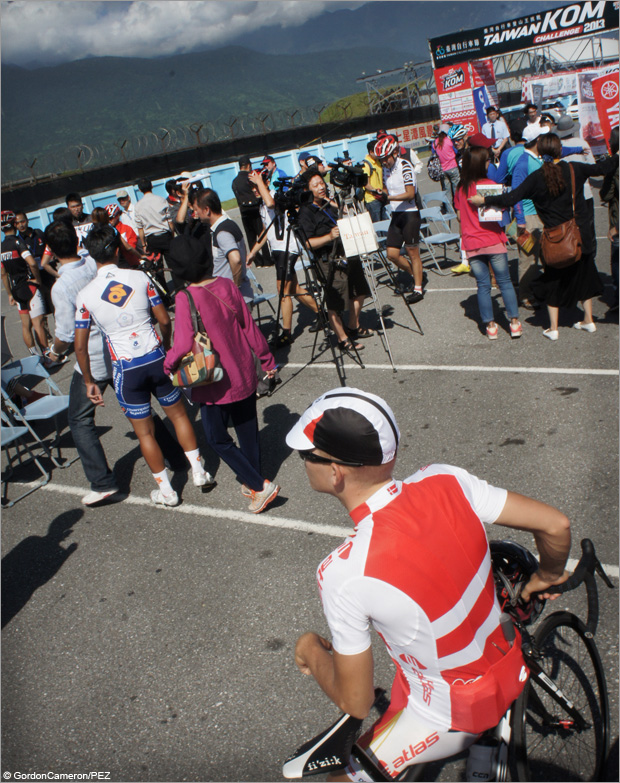 There was a lot of rider-fan and rider-starstruck rider interaction, in a less aggressive way than at some of the big European races. There everyone wants a piece of someone for nothing … sometimes. Once he’d finished media duties, defending champion John Ebsen surveyed proceedings from a leisurely viewpoint by the stage.

Behind the stage, all sorts of interesting characters. They looked like they’d been coming here since the Taroko Gorge was itself just a gleaming, growing cleft in its mother’s hillside. 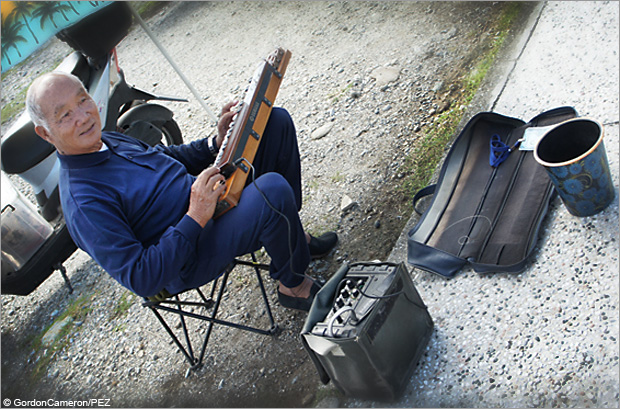 One gentleman was bashing out some pretty nifty sounds on his little Yamaha device, and when I popped some money in the hat … I realised I was in the wrong job. He was doing very nicely for 10am. If it’s an early morning hot-dog with ice cream chaser you’re after, then roll right up for here be just what you need. I’m not normally a hot-dog kind of guy, so I missed this pleasure out. 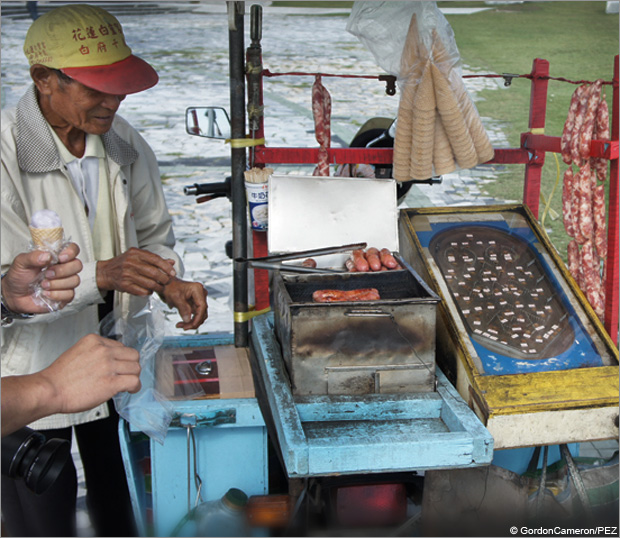 It was impossible not to just wander around as the TV crews got their interviews. Beautiful details are everywhere. 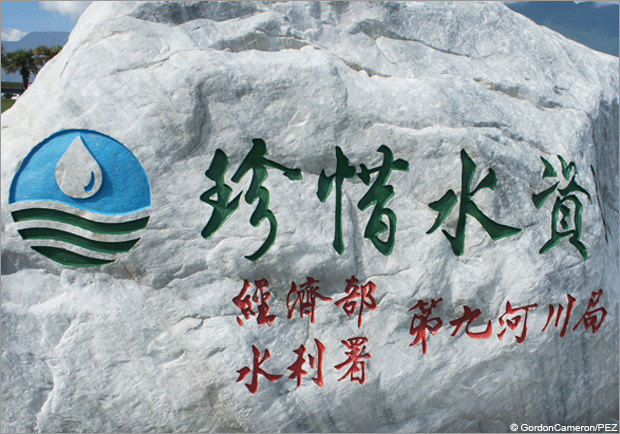 Even if my language skills out here are embarrassingly curtailed, I can bash out an approving nod at the appropriate time. 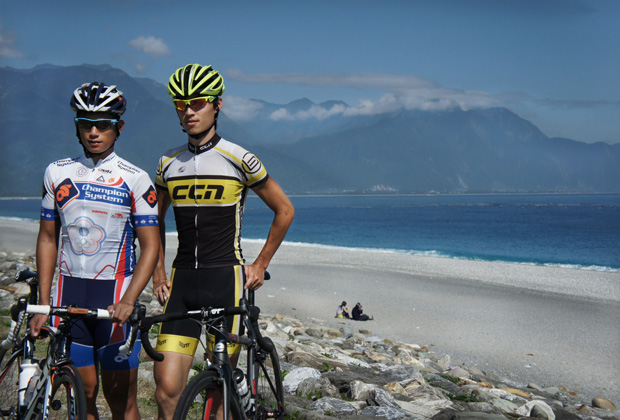 Wang Yin Chi was again in big demand, and the photographers had a wealth of backgrounds to choose from. No surprise that we picked the ocean, the mountains, the beach and the porcelain-wash seas. You might get one in a shot, or two at a push normally. In Taiwan, you seem to manage all of those at the same time. 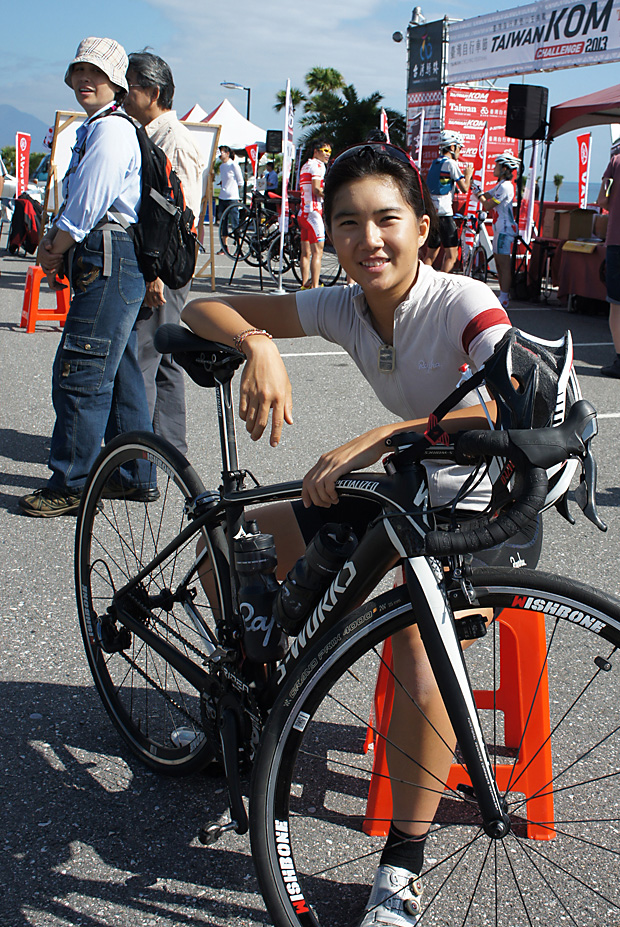 Another regional favorite rider is Serene Lee, who works for Rapha in Singapore. She’s a strong and talented rider, and combines her training with her job and her studies. She was also the cause of a minor reshuffle in seating arrangements on our bus yesterday. Our driver thought it was OK having a World Tour professional next to him in the morning, but he really wanted Serene there instead as she speaks Mandarin. 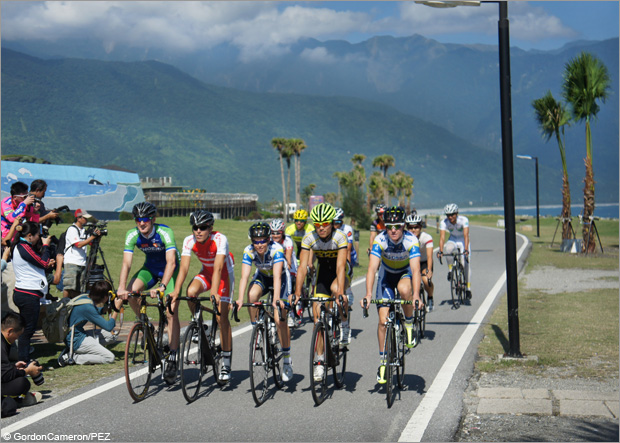 The stars are asked to ride along the sea-front beach path so that the cameras can get some more tape for the news programmes; then, turn around, do it one more time, please. 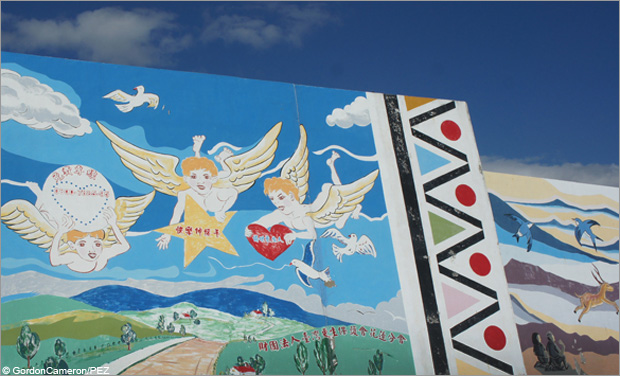 I meander away; the air base is masked by some very cool, and very diverse, artwork. It looks fantastic against the blue, blue sky. There are themes of nature and oneness with the environment; of industry, of community … 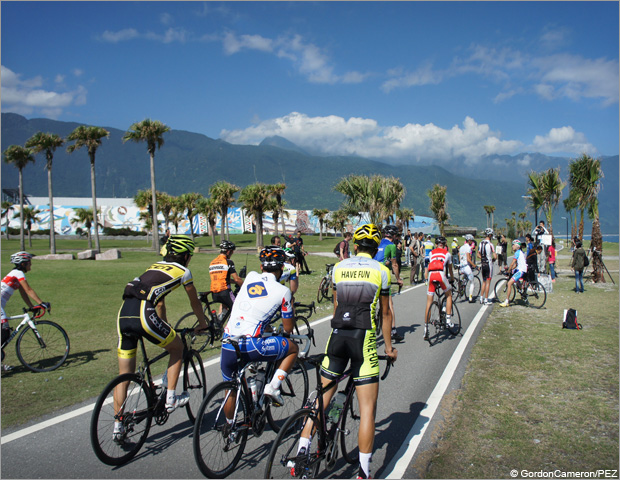 We take off in the bus to go for a photo op as the riders head for the Taroko National Park, but they’re moving pretty quick. Tiffany Cromwell swishes past, in conversation with Pez-man and Crank Punk Lee Rodgers. 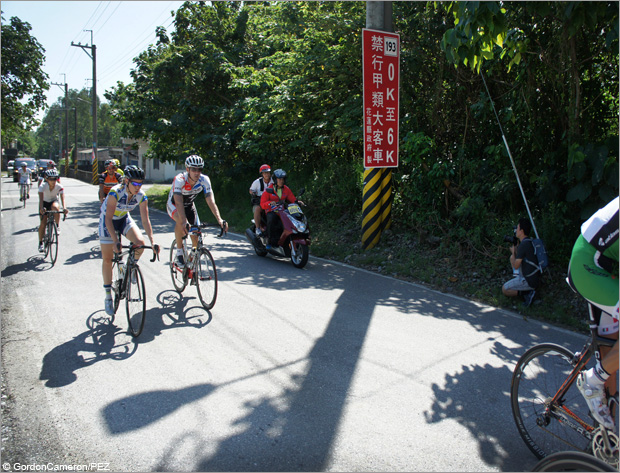 We hammer along the roads to get ahead again, and pass through a gorgeous cemetery, with a few Christian crosses dotted among the shrines. There are lions on nearly all of them, ready to protect the resting souls.

Tomorrow’s souls won’t be resting. Tomorrow it’s the full on might of the 3,275 meter Mt Wu Ling. Keep it Pez for the roadside.