Race Report: With enough time to sit up and look over his shoulder, then a cheeky wave of the arms to say “Come on guys!”, Mark Cavendish scored win number 4 at this year’s Tour. His gap of 3-4 bike lengths made the 70kph run to the line look almost too easy…

A perfect, warm day greeted the riders on this pan flat 198km from Salies-de-Bйarn to the city of Bordeaux. While the GC contenders would be cooling their jets for tomorrow’s TT, the Green Jersey competition was anything but settled, so the sprints were going to be hot. Cavendish proved too much for the others with an almost easy win in Bordeaux. 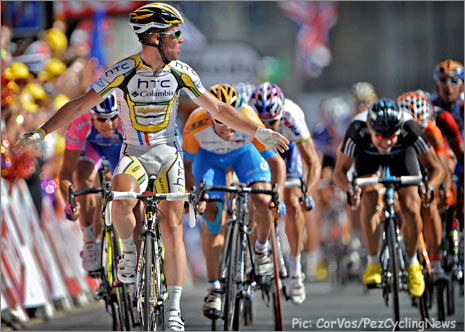 The race was hot from the gun, as a few combinations went off the front but were reeled back. Just a mere 4k into the race, a quartet of riders featuring Matti Breschel (Saxo Bank), Jerome Pineau (Quick Step), Benoit Vaugrenard (FDJ) and Daniel Oss (Liquigas) escaped with the peloton’s blessing and their lead went up to about 5 minutes, but by 65km to go, it was down to 1:50. A few riders had made attempts to bridge but nothing worked and the 4 ahead were left to sweep up all the points out on the road. Clearly the sprinters and the GC favorites were happy to leave all the fighting until Bordeaux. Highest placed was Pineau, but he was just under 2 hours behind Alberto Contador, so obviously these 4 lads were no threat.

The bunch passed Tom Cruise and Cameron Diaz, in France to promote their latest movie. They both seemed to be enjoying the Tour a great deal, riding around in the car ahead of the race after a brief roadside stop. (Apparently being a big movie star counts for some sweet vip access at le Tour.)

The group had the break pegged around the 2 minute mark, and while Lampre and HTC did the pacemaking, nothing was hot enough to keep anyone from having a chat or a laugh. Lance and Basso were talking. Mark Cavendish was faking like he was whipping his team like a carriage driver. Ah, good times at the Tour. Probably not for too much longer.

34km to go, and the break sat at 2:12. They were on the hook for sure, and whenever the peloton decided to reel the fish in, it would be all over for those four out front. By 26km to go, it had dropped to a 1:24 and the peloton began to sharpen up nicely.

Lampre and HTC were the two teams keeping the pace whipped up, and Thor Hushovd lurked in the green jersey, never far from the business end of the race. Milram was working for Ciolek as well, and sent a few riders to the front to set the pace. 20km, one minute to the break.

At 14km to go, the escape’s Jerome Pineau tried his little jump to get away, but that was quickly squashed, leaving Daniel Oss to take off and spend the last moments of the dying breakaway alone out front. Milram had Fabian Wegmann on the front, just turning the screws. Oss’ move was good for TV, but soon to die. The other 3 from the original 4 in the break had sat up and were absorbed at the 13km mark.

The GC riders were scrambling to hide out near the front, ever vigilant to stay out of a crash or get caught behind a split.

The boulevard into town had many center separators, and the peloton kept splitting into two lines to negotiate them. Oss was making the most of his time off the front, but at 8km it was 27 seconds and the sprinters’ teams were whipping up the pace.

The front was all pink and yellow at 7km. Hushovd looked a bit too far down and would have to make up some space to get near the pointy end of things again. Teams swapped the lead as the group had no dominant force taking the reins. Cervelo got a rider up front, along with HTC, Sky, and Milram had put men near the front. Linus Gerdemann (Milram) jumped off the front for a moment but that was short lived.

Oss’ lead dangled off the front like a carrot the donkey couldn’t quite reach, to the point that I’m sure some viewers began wondering “if he could, could he?” But holding off the bunch at a Bordeaux Tour finish is mere folly, and the peloton blew by Oss with nary a glance.

Sky now queued up to the front, clearly working for Edvald Boassen Hagen, and at 2km the riders in black and blue had control of the field. Michael Barry was driving it for the British team.

A gentle chicane and Sky still had control as Barry pulled off. Garmin-Transitions was lined up behind Team Sky, probably working for Julian Dean in the absence of Tyler Farrar.

Under the final kilometer banner and Sky was still on the front. Oscar Friere loomed in the back, the front end fattened up some and Thor got through with some of his teammates. Cav was right where he needed to be, so was Petacchi. Cervelo led out Hushovd perfectly and then the big names got launched and Thor faded quickly. Petacchi cut left and Cav chased his wheel, enjoying the Italian slipstream.

A second later Cav launched to the right and was gone, having time to almost taunt the rest of the field by looking over his shoulder not once, not twice, but three times before sitting up and sticking his fists in the air. Petacchi slipped in for 3rd, and that was enough to take the green jersey off of Hushovd’s shoulders. Thor’s job just got pretty tough with only the stage to Paris remaining to get points back. 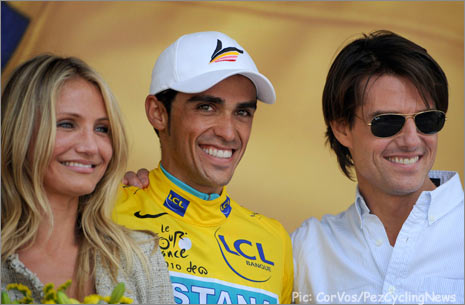 Here’s a good one to fill in your own caption…

All the GC favorites made it to the finish line safely, and the stage is set for a 50km ITT battle tomorrow to settle the matter once and for all for the big blue cup. Could Andy Schleck turn in a big enough ride to put time into Contador and take back yellow? All will be revealed tomorrow.