Roadside St.1: Mark Cavendish was screaming when he wheeled past me. An animal roar of pain, disappointment, frustration and anger. Once again, home soil has not been a happy place for Cav when the biggest prizes are on the line. All the Yorkshire excitement Roadside with PEZ man Gordan Cameron. 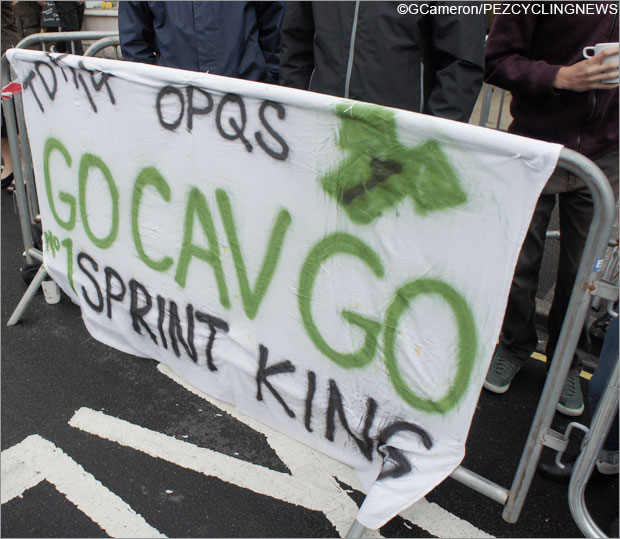 Not such a good day for Cav in the end

But first of all …

Otley: we have a pretty unmolested drive up from Bradford, through Guiseley and Shipley. When we arrive in Otley – home of the fantastic Lizzie Armitstead – the fans are finalising their preparations for the big day. We overhear a discussion about the Tour’s first visit to the UK, in 1974. “It was the most BORING stage ever … they had them just ride up and down a motorway!” There’s no way that today will be a repeat of that tedium. 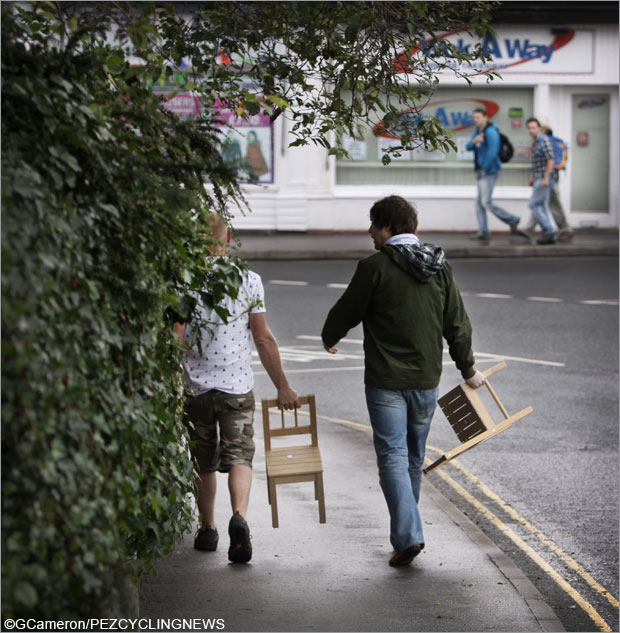 Pitching up in one of the towns with the greatest number of pubs per head of population in the UK, we find the Black Bull which was drunk dry (apparently) before the Battle of Marston Moor in 1644. 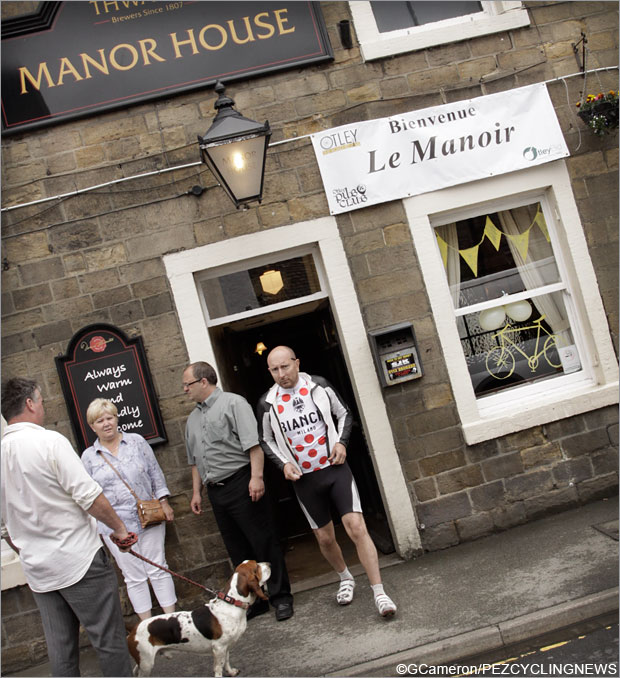 The town was en fête from very early, and had made a huge effort. Yellow everywhere, knitted bunting all over the place and the local pubs had renamed themselves in French for the Tour’s arrival. So, the Black Bull was Le Taureau Noir, with young guys downing pints before nine o’clock in the morning, and the Bay Horse became Le Cheval Bai. We had a quick sausage sandwich and a cuppa in Le Manoir as the morning ticked by. 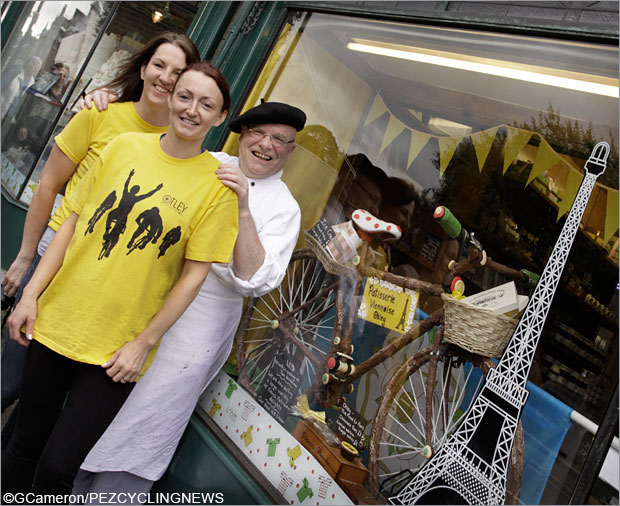 Waiting for the caravan, we met ‘Chocolate Trevor’ Bakehouse; his patisserie has a good sporting pedigree. His two colleagues made the wedding cake for British sporting icon Jessica Ennis-Hill, and they seemed to be doing a roaring trade. 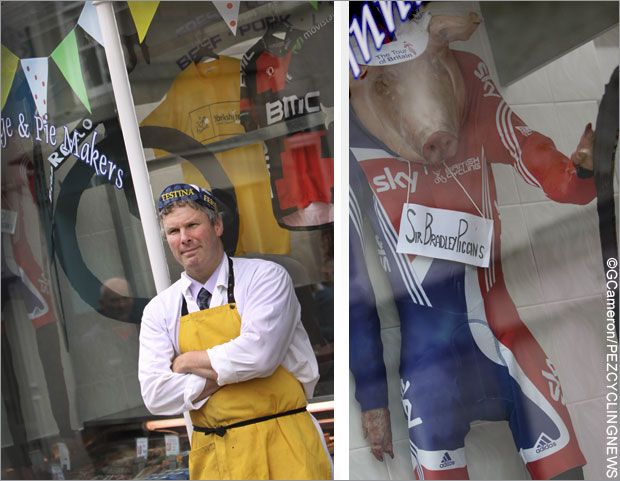 Sir Brad is at the Tour after all

The butcher had really gone to town – have a look at Twitter as his porcine creation Sir Bradley Piggins and his Pigarello were trending overnight. All his mates had casquettes on, too, and they’d set up a stall doing burgers and the like. Anyone with any sense had a food stall in Otley today. 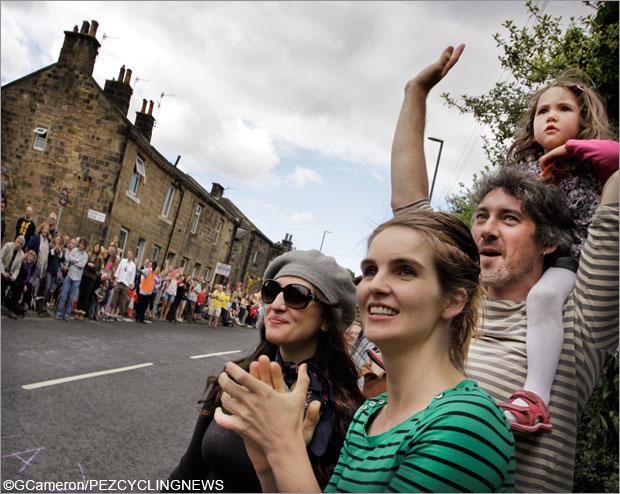 The numbers at the roadside today were vast – anywhere between 1 million and 14 million depending on which rumour you believe, and most were well-behaved. Unfortunately, I heard that one young woman was hospitalised after being poleaxed by a rider. She was standing right on the edge of the road taking a selfie with her back to the peloton.

It happens so often. The exuberance gets too much. A dreadlocked security guard strides down the road to deal with a repeat offender who’s been chalking messages on the road when the vehicles are coming – with a wagging finger: “That man’s mental! Mental!” 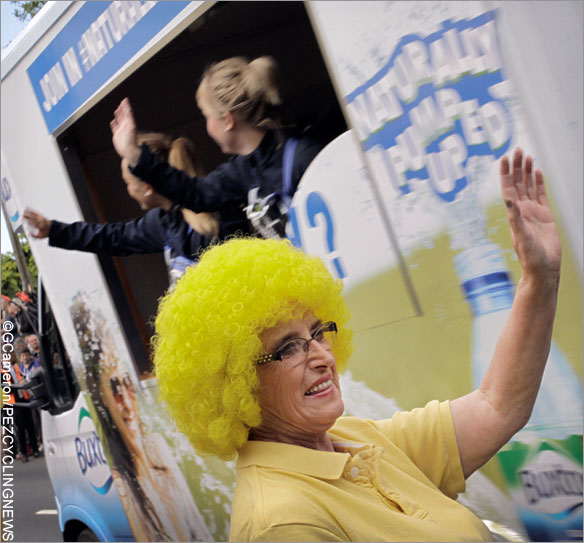 The enthusiasm for the race was building as the caravan thundered by, and I had a goosebumps moment the way I did the first time I saw the Tour in the flesh. Everyone in Otley knows that this visit is a once-in-a-lifetime event. 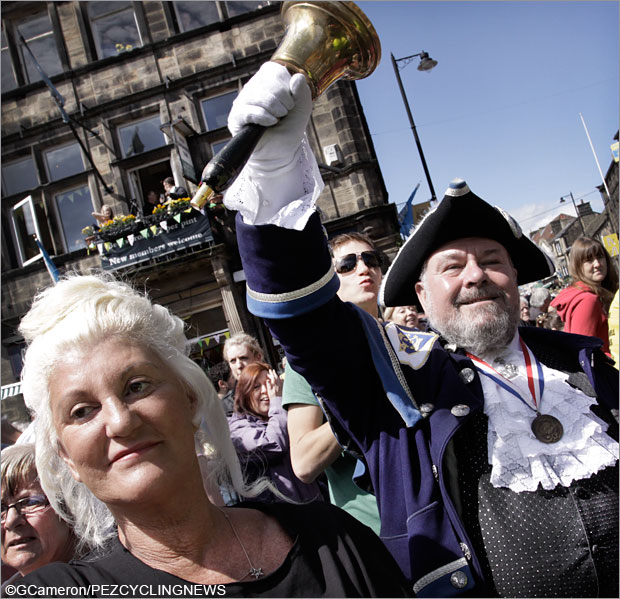 The best balcony view was staked out for the town’s mayor, looking due east as the race flew into town, and a few choice areas were mapped for press and the local camera club. The murk and threat of rain melted away as the temperature zoomed up again. 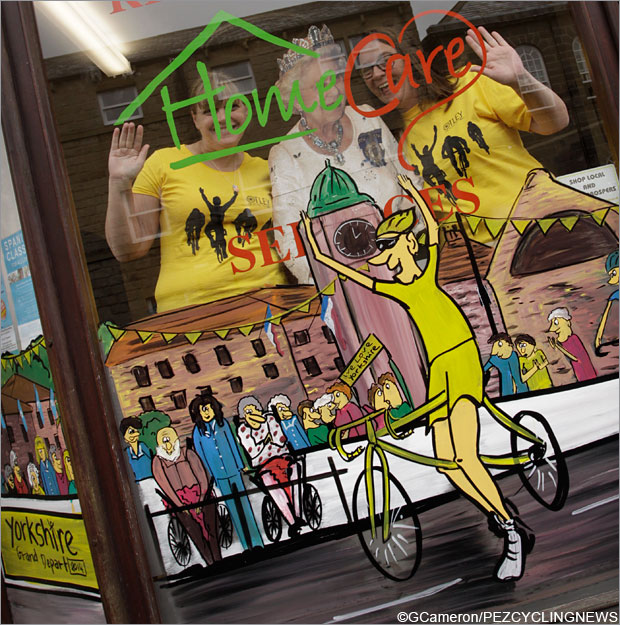 Kate Middleton, AKA the Duchess of Cambridge, AKA Mrs Prince William, will be on the throne one day. She was presenting the yellow jersey in Harrogate today – but Otley had to make do with a cardboard version of the current Queen. 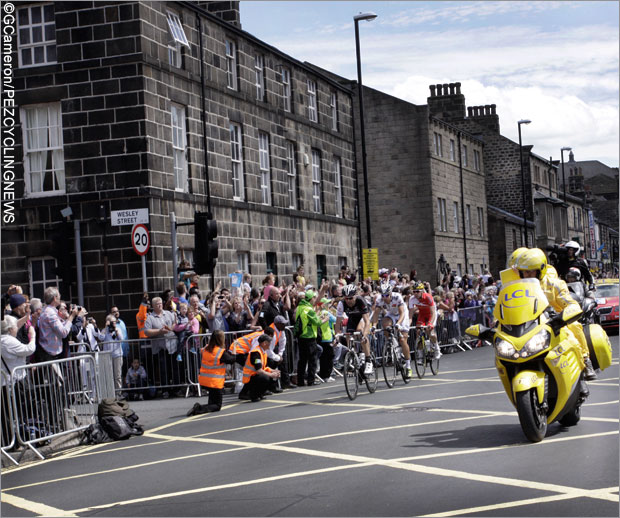 Voigt, Edet & Jarrier in the break

When the excitement hits it’s a first peak, the first figure is recognised from a distance of about 200 yards. Jens Voigt, smashing it on the front again, as he arrives in Otley with Nicolas Edet (Cofidis) and Benoit Jarrier (Bretagne-Seche). 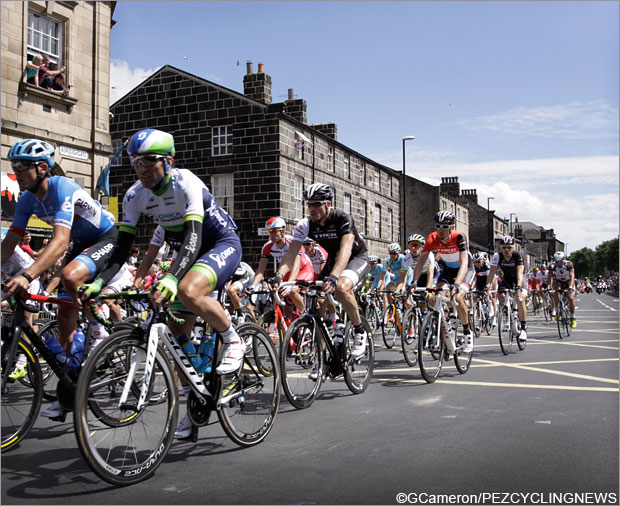 There were Mexican waves up and down the street; rival flag waving efforts raised cheers and laughter between the Aussies and the English. The outriders came through and whipped the crowd up even more – one little girl kept darting from one side of the road to the other, as if her parents had a death wish for her. 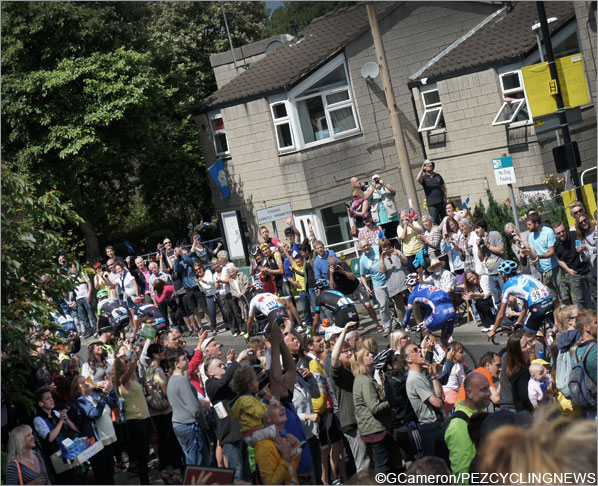 The main field sweeps through the wide streets, lined out but with no massive urgency. The excitement on roadside is now dialled dangerously close to the hysterical. 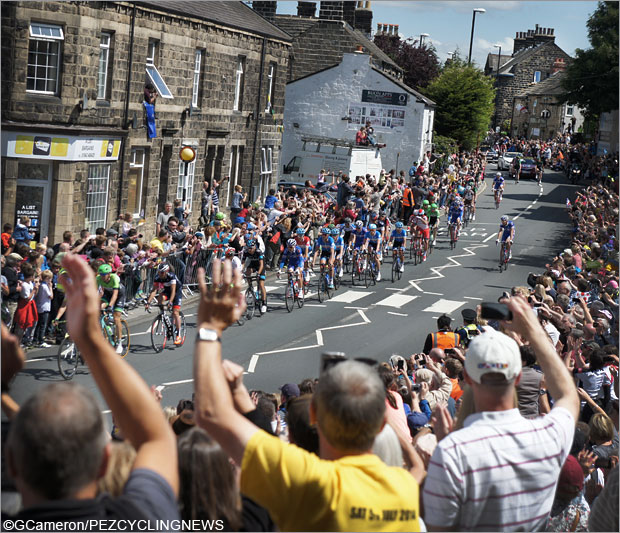 It’s hands in the air like you just don’t care. Super cool dads forget themselves; the kids look up at them as if they’ve never seen that side of their elders before. 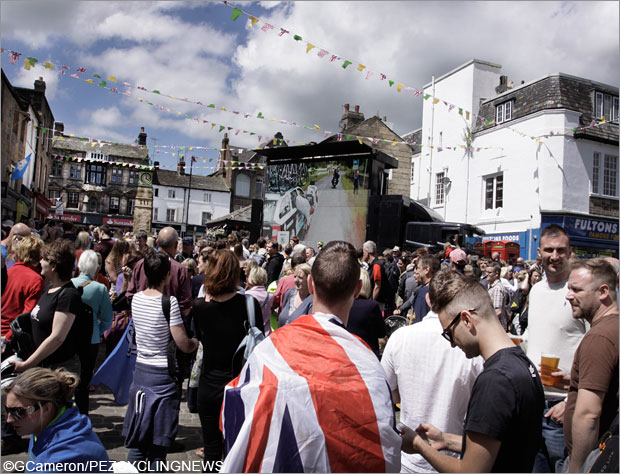 Beer, bikes and a big screen, what better

One of several big screens for the opening stage is situated just off the race route, and there’s a very healthy decamping once the excitement has hurtled out of town.

Harrogate: the roads seem to open ahead of schedule, so we make the short hop across country to the finish in Harrogate. It’s a backroads drive through beautiful countryside but there are so many fans cycling there that’s it’s total concentration on the job at hand. If the legacy of the Tour’s visit is more people on bikes, then today is already a massive success. 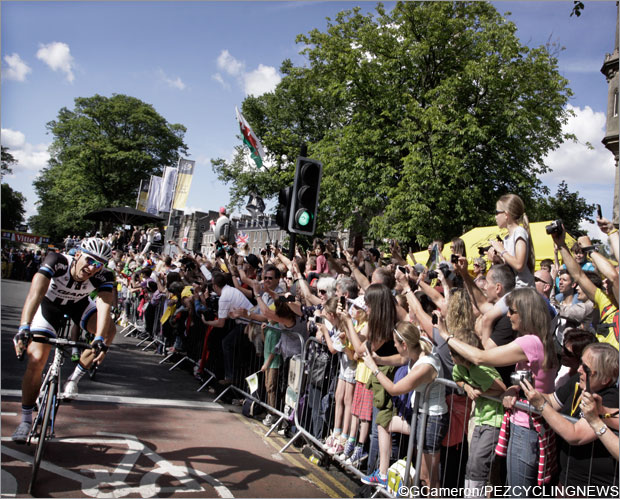 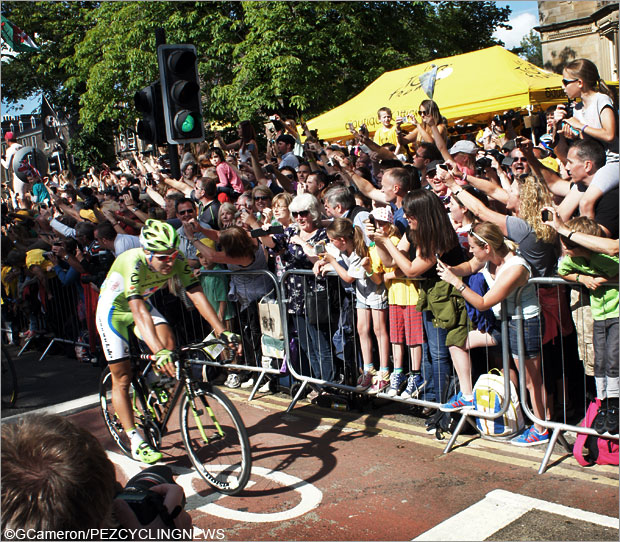 2nd for Sagan, good work for the green jersey

The press tent erupts as the crash happens, and people are scrambling out onto the finish straight as Kittel streaks across the line. So many narratives to spin today – Cav, the Brits, the challengers, more sporting disappointment after England’s miserable soccer World Cup … 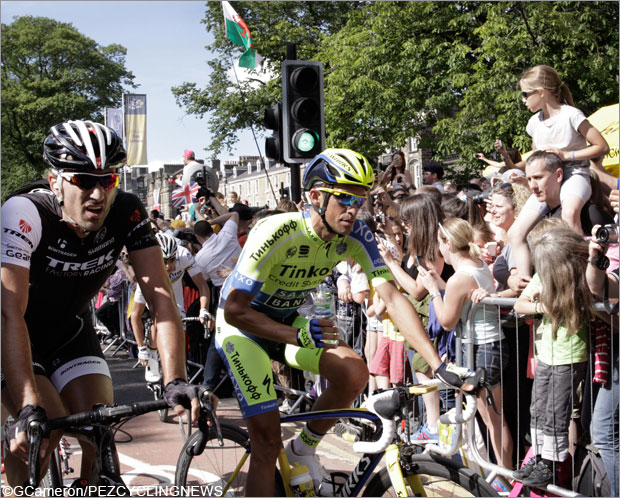 Froome was safe in sixth, Contador in 22nd. Van Garderen and the Schlecks survived OK. Even Chris Horner … and if there are riders you’d expect would be luckless enough to get caught up in anything crash-related, you would put money on those guys. 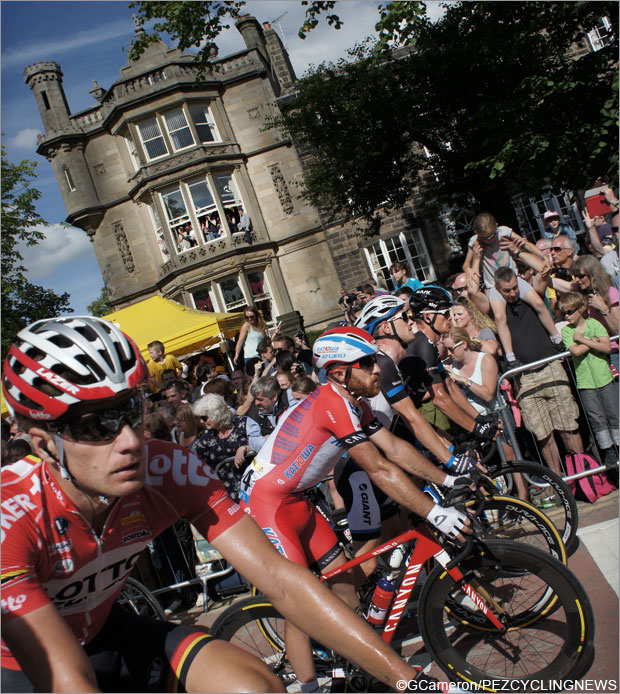 As per usual, there’s a bottleneck as the riders try to get out of the finishing straight. Luca Paolini’s beard goes by; the Giant-Shimano guys embrace and Koen de Kort explains to Dutch TV just how they did it again. Two crash-strewn opening stages in consecutive Tours and Kittel’s boys have piloted him through both times. 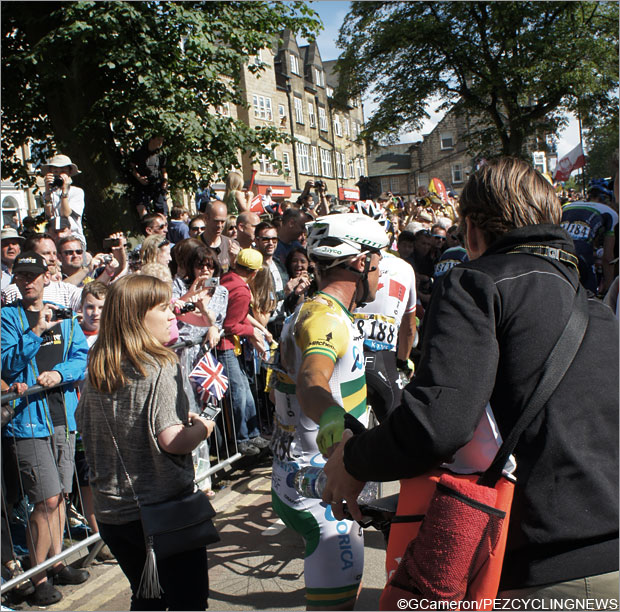 Gerrans; hurt but not out

The crash-tattered victims appear. Simon Gerrans isn’t even riding – he’s just clomping along angrily with his shirt in bits. 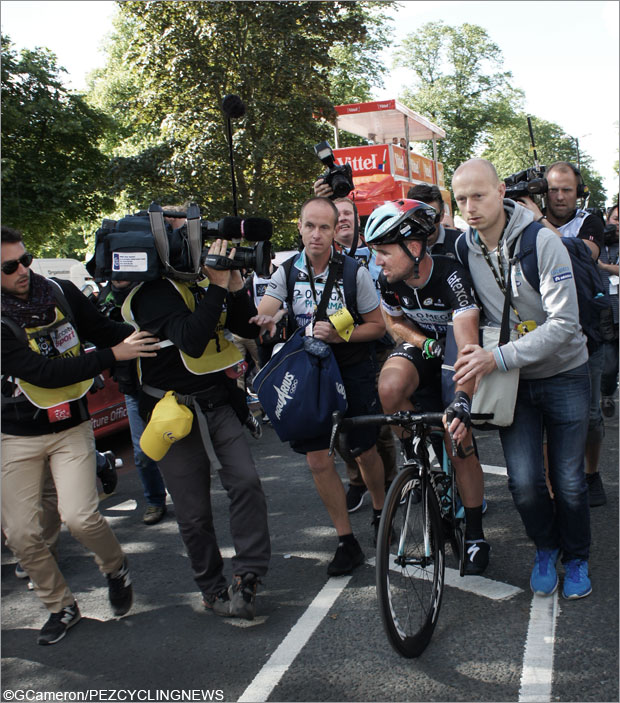 Cav; badly hurt and maybe out

I hear the screams and turn round: Cav has his right arm draped across his thigh as he’s pushed past journalists. It looks like a race-ender straightaway. The noise is a wounded animal’s ‘don’t you dare touch me’, and it’s completely understandable. The Omega Pharma – Quick-Step staff are grim-faced. 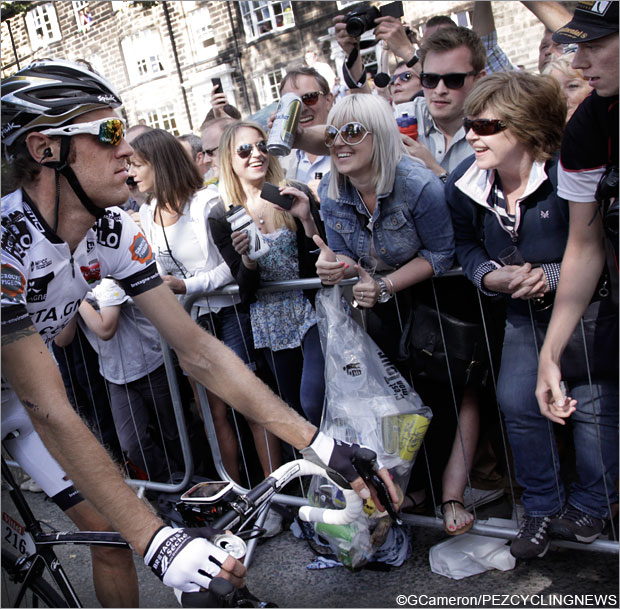 Arnaud Gerard has had a long hard day in the saddle, rolling in 139th after avoiding the finish line chaos. Curiously, he didn’t accept the offered beer. Maybe, he doesn’t fancy it served warm? Cancellara is on the rollers, talking about what might have been as he jumped clear. 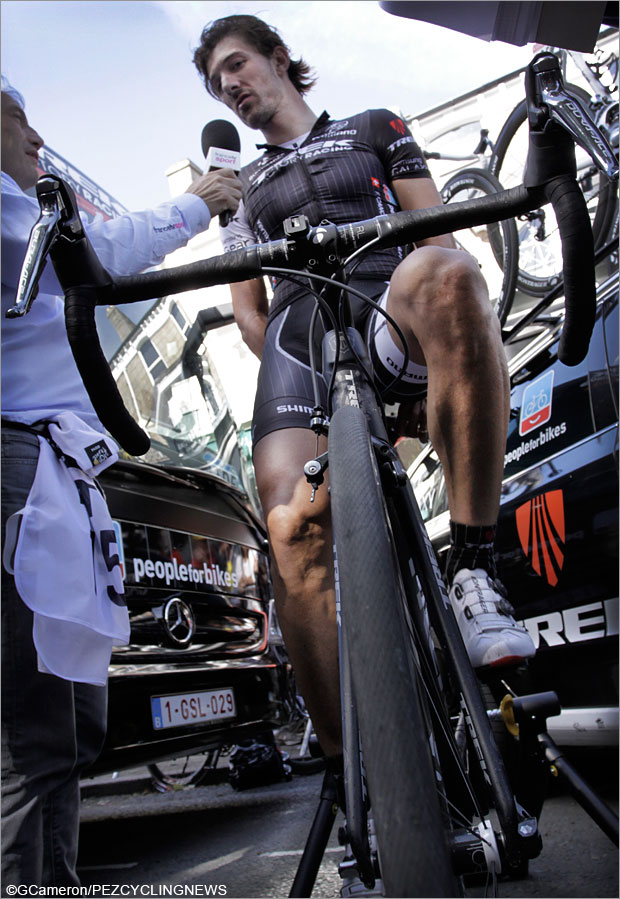 Spartacus nearly had the stage

That long drag up from about 450 meters to go was just too much for the Fabster today, but it was worth a shot.

A beautiful Polish girl with a Tour logo on her cheek is following her compatriot Bartosz Husarski. She tells me she’s travelling to the finish in Sheffield, then on to London, then crossing back to France and cycling from Dieppe down to Paris. This kind of dedication to the cycling cuase used to be just for the big nations – now, cycling is a bigger deal everywhere. 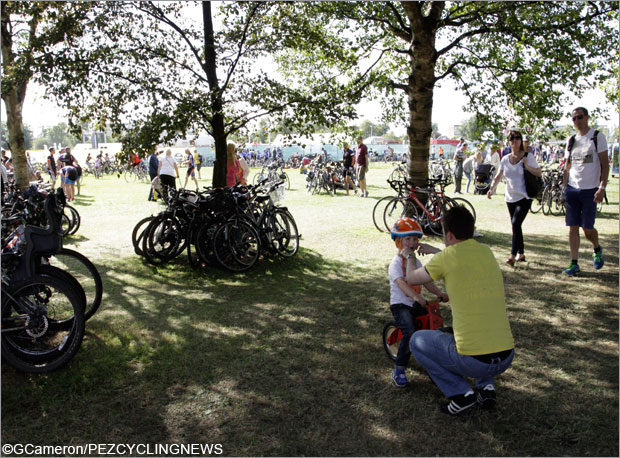 The crowds around the fanpark start to dissipate as the soapy water pours out of the team buses and into the drains; there is still a real crush at the top of the finishing straight as we decide that we’ll just walk back to the Press Centre rather than wait for the next shuttle bus. 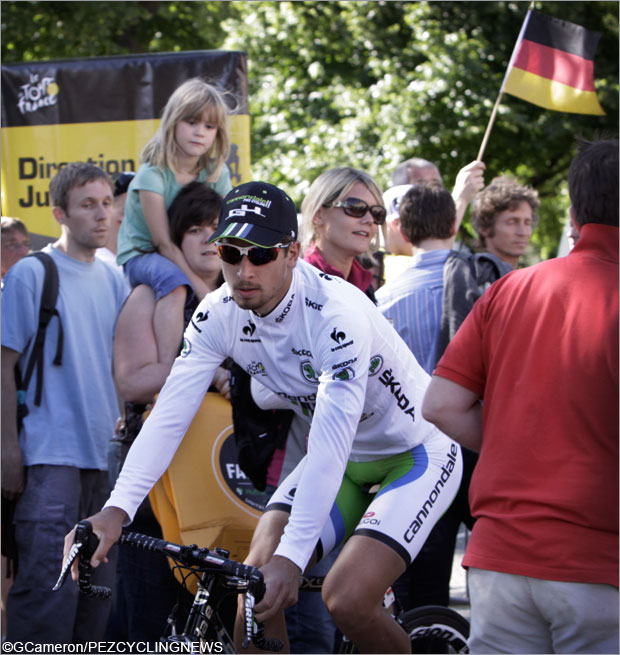 In his new white jersey, shades on, Peter Sagan rides through the crowds with no-one bothering him. The bigger story for the home fans was of a dislocated shoulder and a lot of road rash. 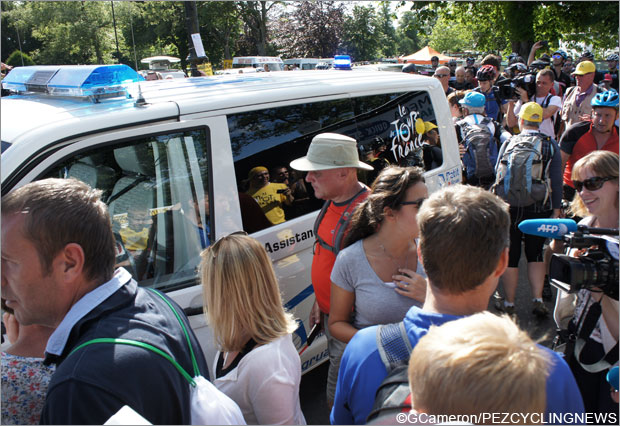 Is it goodbye to Mark Cavendish from this Tour?

Cav emerges from an encircled Omega Pharma – Quick-Step bus and into a waiting ambulance which more or less has to bully a path through the fans. It’s the perfect storm of fan expectation, subsequent disappointment, and the excitement of the day. For the fans, it’s been great, for Cavendish, it couldn’t have gone much worse.

Keep it dialled to PEZ for all the roadside action everyday throughout this year’s Tour de France.
Like PEZ? Why not subscribe to our weekly newsletter to receive updates and reminders on what's cool in road cycling?