This past weekend PezCycling News joined the Lance Armstrong Foundation’s Ride For the Roses in Austin. Tyler Hamilton and Lance’s coach, Chris Carmichael both took time to share their thoughts on the 2004 Tour de France route… 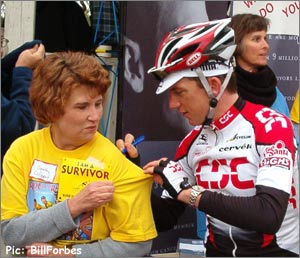 Tyler joined last weekend’s ride For The Roses and signed a few shirts along the way.

Tyler talked about the 2004 Tour route: “It looks extremely difficult. This will be my eighth consecutive Tour de France, and I can say it doesn’t look any easier than the past Tours. Certainly, it’s going to come down to that final week. There are going to be no guarantees until the last few days there. Days to focus on are the two stages in the Pyrenees, obviously. The Plateau de Beille, which is the second mountain stage in the Pyrenees, is very, very difficult. Lance has won there before. This climb is very unforgiving. I think the Alpe D’Huez time trial is going to be extremely important. It’s just like any other Tour, you have to do your homework. prepare well, and know all the courses by heart, so nothing comes as a surprise.” Tyler had positive thoughts about his new team Phonak: “It’s going to be great. I’m going to a training camp a couple of weeks from now over in Switzerland, and I’m looking forward to it.”

Lance’s coach Chris Carmichael also emphasized the upcoming Alpe D’Huez time trial: “I was there at the announcement, I just flew in from there yesterday. The key will be the final week, obviously, they’ve made it so there’s a lot of suspense into the final week. I think the route suits Lance well. The route’s always hard, but the athletes make the race. That’s really what makes the Tour de France, how intense and how fast they ride it. Lance this year wasn’t at the level that he had been in previous years. To really capitalize on how difficult the race is, especially with the Alpe D’Huez time trial, he’ll really need to be back to the level he was in 2002″. I usually spend a week with him doing reconnaissance. The time trail will be decisive, it’s all uphill. Alpe D’Huez is a much steeper uphill time trial than they had a couple of years ago at the Chamrousse time trial (near Grenoble). It will be more decisive. Plateau de Beille in the Pyrenees will be a tough stage. A lot depends on tactics of the race, but Alpe D’Huez will definitely be decisive.”

Read our full report on the 2004 Tour Route here.

PEZ-Report: Ride For The Roses