Stage Report: After another stunning demonstration of awesome from Peter Sagan at the end of a wild and crazy third stage, the Tour de France heads southwest along the coast, before heading inland for what should be the second bunch sprint of the 2012 Grand Boucle. Let’s see if things went according to plan…

The day’s break jettisoned the heavy field from their flanks after a speedy start to the day. Three riders earned the privilege of leading the way to Rouen on Wednesday, and for the first time at this year’s Tour de France, one of those riders was not Michael Morkov. The KOM leader earned a quiet day in the field, whilst Yukiya Arashiro (Europcar), Anthony Delaplace (Saur-Sojasun), and Vuelta King of the King of the Mountains, David Moncoutie (Cofidis) took over the reins and did their thing.

The trio leapt to a big gap early, but as with all early breaks at this point in a still young Tour de France, their chances were measured somewhere in the nil range. Behind, it was RadioShack-Nissan-Trek at the head of affairs, and it was the soon to be 41-year-old Jens Voigt doing copious amounts of hard time at the front. 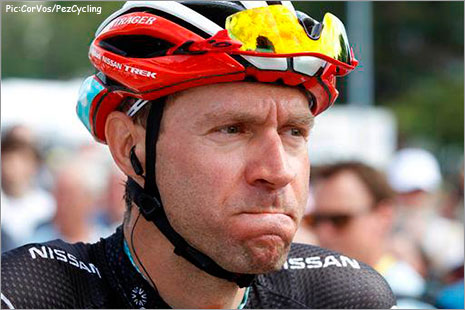 Forty plus? No problem for Jens Voigt.

Fast forwarding through about four hours of racing now – yep – the break was put to pasture with around 8k to go. Apart from the demise of the break, the intermediate sprint was about the only other significant event – the break gobbled up the first three spots, but back in the peloton, it was Mark Cavendish who led the way over the rest of the Green Jersey hopefuls, with Goss in 5th, Renshaw in 6th, and Sagan in 7th. Four points made up for Cavendish on Sagan, but unfortunately, he’d lose all that gain and then some with his crash a little further up the road… 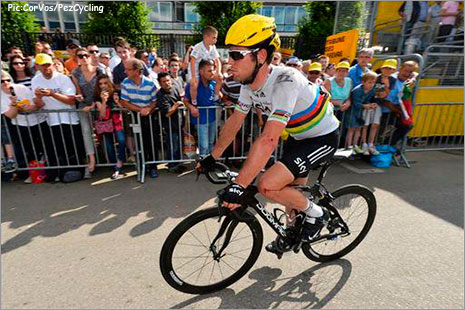 Mark Cavendish was not a happy many when he crossed the finish line in Rouen this afternoon.

With the break consumed by a hungry field, things got interesting. Just as the juncture to the early move was about to be made, the attackers got frisky. The likes of Bouet, Pinot, Grivko, and Chavanel couldn’t resist a chance to take their fates into their own hands, but there was nothing doing against the might of the sprinter teams behind. Still, with odds about as good as the early break on their side, seeing Chavanel up the road again late in the day was one of those moments where you sit up and take notice. He’ll get his stage win before this Tour is out.

The Finale
With 3k to go, all attacks have been put in their place, that is, they’ve been crushed by the force of Lotto-Belisol. The race is hurtling along the Seine, but the wind coming off the Seine is pushing a mutilated field further and further to the left, and then it happens. Huge crash inside three kilometers to go! The detonation takes out a massive swath of the field, including the World Champion, Mark Cavendish. Up ahead, there are some quick glances back, but Lotto is firmly in control and drives ever harder toward hopeful glory in a minute or so.

The field crosses the Guillaume le Conquйrant Bridge without any worries, and Greipel still has three men in front of him. Once again, Lotto-Belisol has put together a perfect leadout, the kind every sprinter the world over dreams of.

There’s an ominous storm brewing on Greipel’s wheel though – Alessandro Petacchi is tucked in perfectly on the German’s wheel, and right behind him is Matt Goss. The leadout is perfect for Greipel, but his sprint had better be just as perfect. 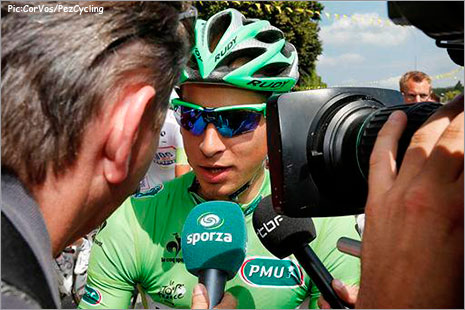 Despite being semi-caught up in the late crash that put Cavendish on the pavement, Sagan got himself back into a good position and managed a solid 5th place on the day. His grasp on green gets stronger and stronger…

Greg Henderson pulls through as the final, most important cog in the leadout, Greipel comes past and there’s that moment as a television viewer when you realize you’re holding your breath… While we wait those final agonizing seconds to see if Greipel can pull off the win, Henderson is already sitting up pumping both arms, with the full knowledge that his man will take the day.

The view from the front makes it look like Petacchi, Goss, and Sagan are all about to come around Greipel, but the camera from above shows otherwise – no one makes so much as a millimeter on Greipel. Petacchi? He starts on the wheel, tries to come around, but ducks right back into Greipel’s shadow, content with second place. 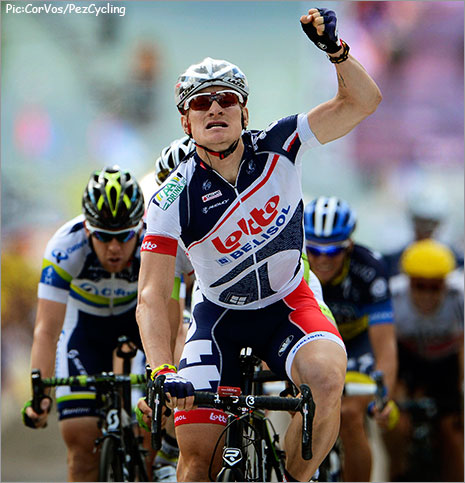 Greipel roars as he crosses the line, and behind, each of his leadout men cross the finish, sitting up straight, celebrating – even more than Greipel himself. It’s a beautiful scene, one that does a lot to show just how much the win means to everyone on Lotto. Special.

Behind the celebrating Lotto boys, the remnants of the field and the battered victims of the late crash trickle in. Cavendish comes in a few minutes later, looking absolutely pissed off. It’s easy to shrug off the lack of a train when you win, but when you get taken down in a crash that you never would have with your normal train…it’s a little harder to take. 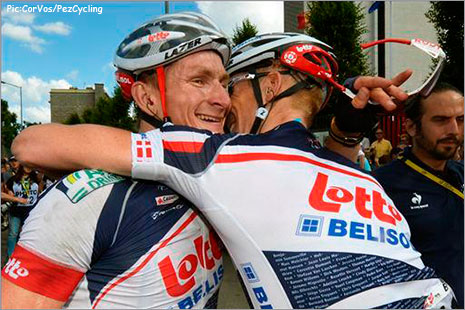 Tomorrow – more sprinting! Keep it PEZ for all things Tour.