Race Report: Stage 1 of the 100th Tour de France started with the usual, predictable long break and long chase with nothing much to talk about. Then in the last few kilometres of the stage all hell broke loose. First a bus got stuck under the finish gantry, the line was moved, there was a big crash, the finish was re-instated and no one knew what was going on. Kittel won though and you can’t take that away!

The 213 kilometre Stage 1 from Porto Vecchio to Bastia is undulating for the first 100 kilometres, with the only climb of the day, the Cat 4 Côte de Sotta (133 metres altitude) coming after 45.5 kilometres. From the feed zone at Solario the course rolls to the finish over the last 100 or so K’s. A bunch sprint and the first yellow jersey going to the new British road champion Mark Cavendish is what many expected.

Stage 1 “Fly Through” from globalcyclingnetwork:

The 100th Tour Kick’s Off
Nice weather for stage 1, blue skies and a little wind. First problem of the day came to Chris Froome (Sky) who went down in a minor crash and needed at first a new rear wheel and then a bike change, but it was all in the neutralised zone and without consequence, so no worries for the big overall favourite.

As soon as the flag dropped, the first group of five riders were away up the road with the KOM jersey in mind. The five in the break were: Jerome Cousin (Europcar), Juan José Lobato (Euskaltel-Euskadi), Lars Boom (Belkin), Juan Antonio Flecha (Vacansoleil-DCM) and Cyril Lemoine (Sojasun), they soon built up a good lead, after 15 kilometres they had 3 minutes in hand.

Fairly unsurprisingly; Lotto Belisol and Omega Pharma – Quick-Step had the peloton under control with Argos-Shimano just behind, the peloton was drawn into one long thin line, with nearly 30 kilometres still to go before the categorised climb of the Côte de Sotta.

The Climb of the Day
The Côte de Sotta is no mountain at only 147 meters high, but it does give someone the chance to wear a leader’s jersey for at least one day. The break was all together at the base and stayed that way until they started foxing for the sprint with 1 kilometre to the top. First to jump was Lemoine, Boom chased him down and then Cousin went within sight of the banner and Boom was on him. The full sprint had Cousin, Boom and Lobato fighting it out and the little Spaniard squeezed through on the inside to take the first polka dot jersey of this year’s Tour de France, the bunch were 3 minutes behind at the summit.

With around 140 kilometres still to go, Lobato had a talk with his DS and then Flecha to see what the situation was and the future of the break. His DS shrugged his shoulders and Flecha said he wanted to stay out front till the intermediate sprint, but it was a long way off and the others didn’t seem that interested and the gap dropped from 3 minutes to under 40 seconds.

The peloton also lost interest and the speed all round dropped and the break gained a minute, if they wanted it or not. It was a good time for Cadel Evans to stop for a mechanical and the call of nature. No worries for the Australian, both were undertaken and he was back in the bunch in no time.

The lead extended to 3:20 with 130 kilometres to go as the peloton lost nearly all interest in the chase. Argos-Shimano had Johannes Fröhlinger were on the front and Lotto Belisol was next in line with OPQS after that.

Through the feed in Solaro, after 100 kilometres, the lead was back to less than 2 minutes and the fire had gone out of the race. Flecha was still keen to ride on, the others were not and the peloton was also taking it easy. Flecha had a long conversation with his DS via radio and it looked like the break was over. Cousin thought he would go for it on his own as the peloton was breathing down their necks. Again the peloton were uninterested, Lobato, Flecha and Boom chased Cousin and Lemoine in between, although Boom didn’t contribute much to the annoyance of Flecha. Eventually all five got together again and the game of cat and mouse was on again.

OPQS took the head of affairs in the peloton and the lead grew to 4 minutes with 90 kilometres remaining.

From the 4 minute lead the gap shrank slowly and when the leaders got to the intermediate sprint in San Giuliano, with 63 kilometres to go, they only had one minute. Flecha attacked with about 500 metres to go and looked like he had it, but Boom launched himself after the Vacansoleil man and passed him for the maximum points. In the peloton Cannondale came to the front for Peter Sagan and his thin excuse of a moustache, the 6th place at this sprint could make all the difference for the point’s jersey at the end of the day. Lotto Belisol’s André Griepel was the fastest ahead of Cavendish and Sagan, the German got 10 points towards the green jersey

Today’s King of the Mountains leader; Juan José Lobato (Euskaltel-Euskadi) slipped back to the bunch leaving Boom, Cousin, Flecha and Lemoine to forge on, they were not going to be allowed more than 2 minutes.

The Final 50 Kilometres
All the teams started to move forward in the peloton, the sprinters for a good position and the GC men to stay out of trouble. The lead had been brought down to 1 minute as they came into the last 40K. The last kilometres have two sharp right hand bends and the finish straight is a narrow street without much room for passing, tricky would probably cover it, suited more for the agile sprinter and not the power rider.

The end of the day for the break of four came with 37 kilometres to go as they passed through the village of Torra. RadioShack Leopard moved to the front with the oldest man in the Tour; Jens Voigt leading the train. Saxo-Tinkoff was next to make the pace as the main sprinters teams were still holding back from full power.

Sky took to the front and put the bunch into a long thin line as they entered the last 25 kilometres, this animated OPQS and Lotto Belisol to take their proper place at the head of affairs. The wind was starting to cause problems as the course twisted towards Bastia, the head wind closed the bunch up and the urgency faded away from the pack. Just about every team had someone at or near the front.

The Chaotic Last 10 Kilometres
Crash champion Johnny Hoogerland (Vacansoleil-DCM) found himself on the wrong side of a banner with 15 kilometres to go and at the same time the Orica-GreenEdge team bus was stuck under the finishing gantry. 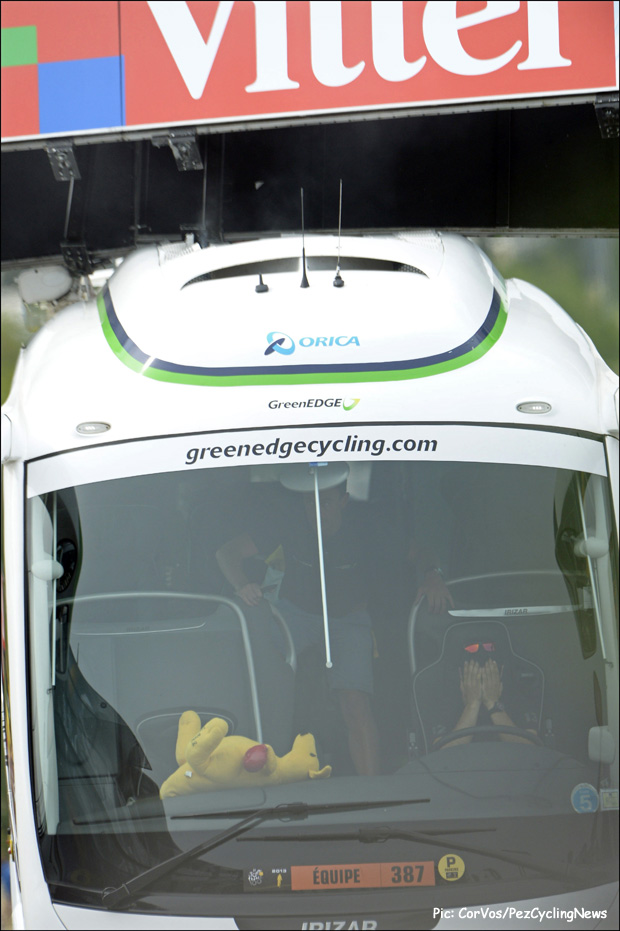 Apparently the GreenEdge bus was running late and was allowed onto the race circuit by the organizers so it could get to the finish ontime. It was then supposed to stop before the line so they could raise the gantry to the correct height for it to pass. The driver didn’t stop though and he almost caused the first stage of the 100th Tour de France to be one of the most memorable yet!

Next crash came at 13 K’s out with half a dozen riders being tangled up in a roadside banner, Canadian Ryder Hesjedal (Garmin-Sharp) was amongst them, but was up and chasing.

Due to the stuck bus the finish had to be changed to the 3 kilometres to go mark. Cannondale came to the front for Sagan as the speed lifted as there were now only a few kilometres to go. Orica-GreenEdge and OPQS pushed their way forward as the riders were finding out about the shortened stage.

Two to go (or 5) and there was another big crash with a large group including Cavendish, Greipel, Sagan and many others. The bus was shifted and the finish was moved back to the original finish line and no one knew who was where. Movistar, Lotto and Vacansoleil moved forward and also Argos who had Kittel and Degenkolb up there. 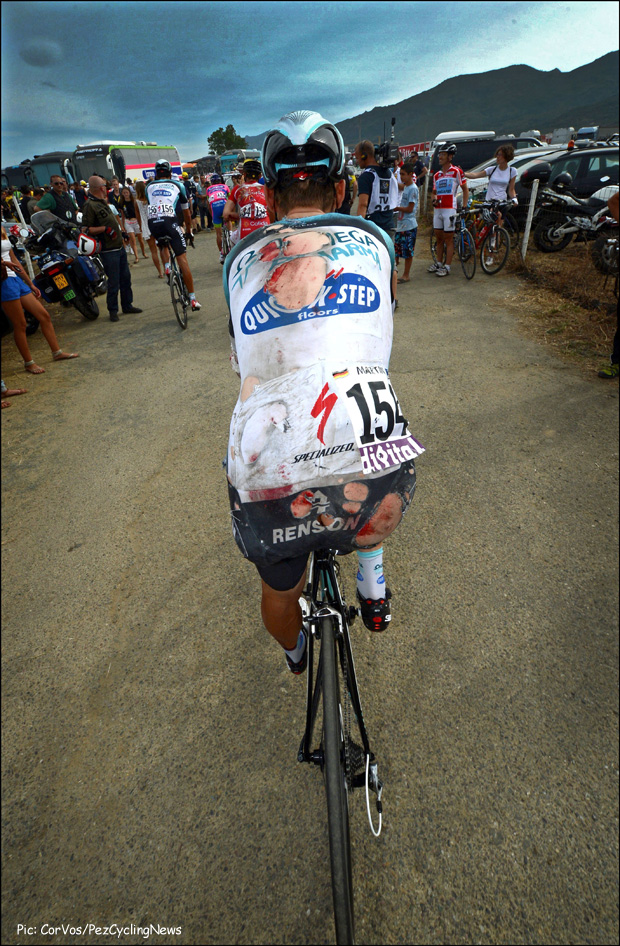 Tony Martin came down very heavily but managed to get back up and ride to the finish before then being taken straight to hospital by his team.

Through the tricky bends and Argos had the lead. Niki Terpstra (Omega Parma – Quick-Step) went for a long one, but it was too early and Argos pulled it together for Kittel to come round the outside to edge it from Alexander Kristoff (Katusha) and Danny Van Poppel (Vacansoleil-DMC) in one of the strangest stage finishes…ever. 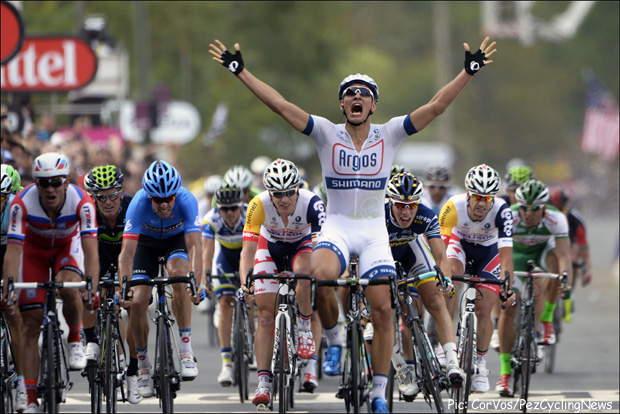 Many riders were held back by the crash, including Alberto Contador, but they say all riders would be given the same time, either because of the crash or the utter confusion as to what was going on. The stuck GreenEdge bus ruined the finishline camera and recording equipment so all classifications would have to be made via France Televisions coverage instead of the usual timing chip and finishline camera deciding things.

The stage win, the yellow, white and green jerseys are all for Marcel Kittel of Argos-Shimano though. Let’s hope tomorrow is a little bit calmer at the finish. Keep it PEZ for all the action.

Full results and photos to come as soon as they are available.

Lotto Belisol: Press conference on the eve of the Tour