Race Report: Today was always going to be one for the sprinters, and the fast-men didn’t disappoint with the top four; Kittel, Greipel, Cavendish and Sagan fighting it out on the streets of Saint Malo. It wasn’t pretty, but it’s the job of the sprinters to cross that line first, however they manage it!

Manx Missile Explodes Sprint
After 190-some kms it was all together for a nice clean sprint into St. Malo… at least it would have been if this wasn’t the Tour, the seething end of the rainbow colored serpent wasn’t a knock down drag em out brawl for control of the front, and there wasn’t that awkward little left hand jog right before the line. Who said this week would be dull?

What lined up as a drag race between Greipel, Cavendish, Sagan, Kittel and the rest of the fast men turned to chaos as the sprint unfolded, when Argos-Shimano’s Tom Veelers took a direct hit from a wayward Manx Missile at top speed, sending bike and rider ass-over-tea-kettle in a body slam even Hulk Hogan would have admired. Amazingly no one else went down. Now that’s how to get your bell wrung, but no way to end a stage of the Tour.

Just meters ahead the finish was so tight it called for a photo replay, with Marcel Kittel getting the nod over Greipel, and erasing any doubts after his stage 1 win where his three top adversaries had been delayed by crashes.

Stage 10 was 197 kilometres long from Saint Gildas des Bois to Saint Malo and it’s a sprinters day with one Cat 4 climb after 142 kilometres; the Côte de Dinan is 1 kilometre long and is 4.2%. The only problems were the narrow roads and the costal winds near the finish.

How the Day Unfolded
It was a sunny day in Brittany with temperatures of around 25ºC and there were 182 riders on the start line in Saint Gildas des Bois. The first attack came very quickly after the flag dropped and we had Jerome Cousin (Europcar), Juan Jose Oroz (Euskaltel-Euskadi), Luis Mate (Cofidis), Lieuwe Westra (Vacansoleil-DCM) and Julien Simon (Sojasun), none of the five were within an hour of Chris Froome on the overall. The Sky team had control of the peloton, but the lead grew and after 15 kilometres they had 5 minutes in hand. 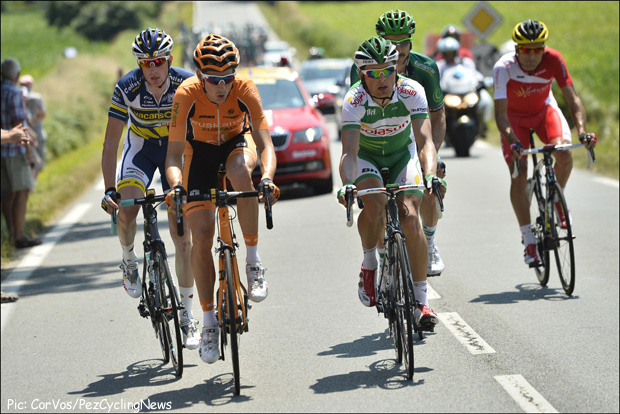 The day’s sacrificial lambs. Also known as the day’s break.

The first hour was fast at 44kph, but even with Omega Pharma – Quick-Step, Argos-Shimano and Lotto Belisol heading up the chase with Sky, the lead hovered around the 5 minute mark. 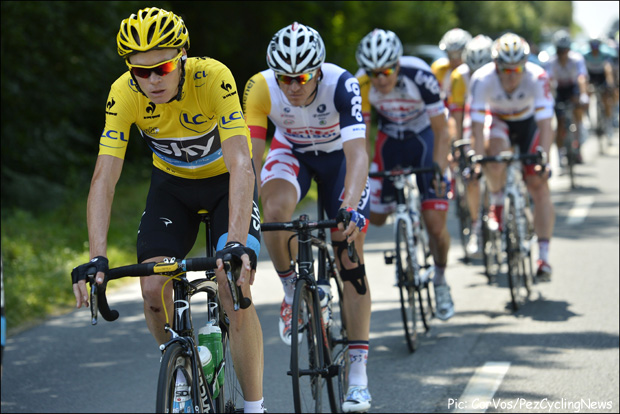 Chris Froome made sure he kept up front and out of trouble all day.

The speed dropped to just above 36kph, but the gap was stable between 4 and 5 minutes. The race passed through Saint Méen le Grand after 103 kilometres, town of triple Tour de France winner; Louis Bobet, for the feed zone. Louison won the Tour in 1953, 54 and 55 and a load of Classics; Sanremo, Flanders, Roubaix and Lombardia. Add to that wins in short stage races and the KOM in the Tour (1950) and the Giro d’Italia (1951); he was one of the top riders of the 50’s.

Before the climb with 55 kilometres to go, there was the intermediate sprint in Le Hingle, 14.5 kilometres earlier. This brought the Cannondale team forward with Peter Sagan on its tail. The leading five were undecided as to what they would do at the sprint, in the end Luis Mate (Cofidis) jumped and Lieuwe Westra (Vacansoleil-DCM) followed him over the line with Simon, Oroz and Cousin behind them.

Cannondale put their train on the front, but it was Greipel who shot past on the inside of the Green riders for 6th, Sagan 7th with Mark Cavendish (Omega Pharma –Quick-Step) 8th.

The course now turned onto narrower roads towards the climb of the day, the Côte de Dinan. First they passed through the town of Calorguen, this is where the five time Tour winner Bernard Hinault now lives and his wife is the Mayor. Up through the village of Dinan and past the castle, it was Lieuwe Westra who attacked for the 1 mountains point and put his head down and carried on with the effort forcing the other to chase. But they got together again, although words were had between some of the riders and Westra, his attack was not appreciated.

Into the Last 50K
The gap dropped under 3 minutes and the chase was getting a little more animated, it was still Lotto Belisol, Omega Pharma – Quick-Step and Argos-Shimano on the front, but they didn’t want to catch the escape just yet.

30 Kilometres to Go
The five up front now only had 1 minute and 10 seconds and the turn from a headwind to mostly tail/cross was not far off, that left turn came at Cancale with 23 kilometres to the finish and all the riders were at the front of the peloton as this was the worst time to lose the wheel.

Oroz thought he would try his luck from the break, but it was for nothing and the gap dropped under 1 minute as they entered the last 25 kilometres and the end of the break was close. Through the village and Saxo-Tinkoff moved to the front to hold Alberto Contador near the front, most of the GC men were on the front, the sprinters teams were yet to put their train engines to the fore.

20 kilometres out and Westra had sat up from the escape to wait for the pack, the other four persisted on as the speed lifted under the pressure of Saxo-Tinkoff’s Nico Roche as riders dropped off the back of the peloton. The peloton left the four to stew out front for what seemed like forever, but they were caught with 6 kilometres to go and it was time for the sprinters to do their stuff.

As soon as the day’s long break was caught, it was all together for the final few kms of a 197km stage. Omega Pharma – Quick-Step had the helm of the peloton with Stuart O’Grady of Orica-GreenEdge in amongst the action for Matt Goss. Saxo-Tinkoff was there too and had a train on the front, Lotto Belisol was there for Griepel, but it was OPQS who wanted the lead. Lotto pushed through and dominated coming under the 2 K banner, but Argos-Shimano were next to the front, as OPQS had pulled their soldiers back for the moment.

Up the wide straight and Mark Cavendish was on the wheel of Marcel Kittel who in turn was on the wheel of André Greipel as the road headed towards a slight bend. Greipel had the perfect lead-out to the front as Cavendish tried to cross towards the big German and bumped Tom Veelers (Argos-Shimano) as he was peeling off the front causing Veelers to hit the deck. 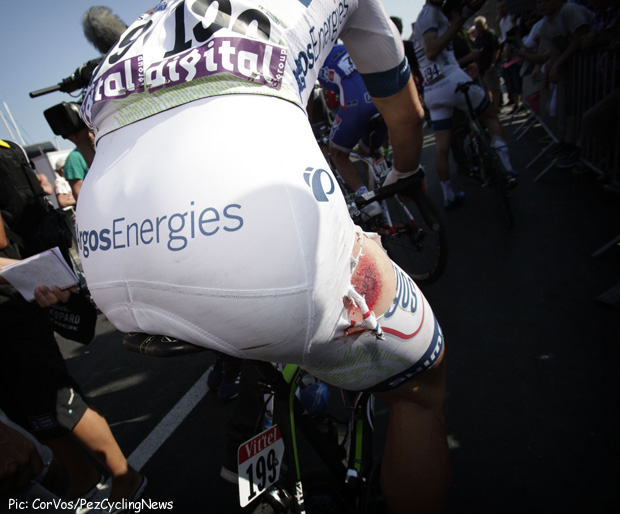 The result of Cav’s little bump.

Greipel burst on to the front with Marcel Kittel stuck to his wheel as Cav lost pace due to his bump. Greipel was at full gas, but the big blond German Adonis; Kittel had the time and the speed to pass his countryman inches before the line. Peter Sagan was 4th without the use of his team. A bit of a ragged sprint in the end, but it worked well for Kittel. 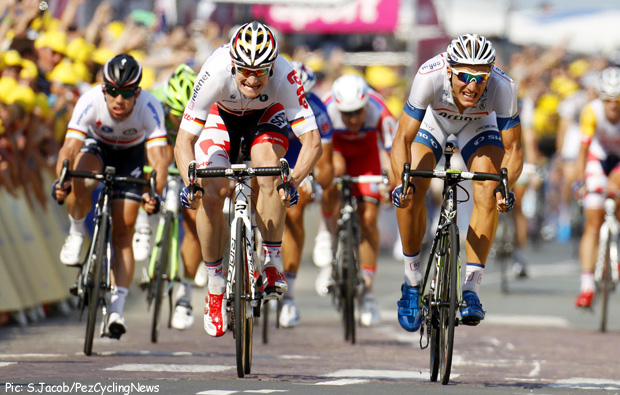 Another stage win for Marcel Kittel and the Argos-Shimano team, all the jerseys stayed the same, but you never know what could happen in tomorrow’s 33 kilometre time trial. Keep it PEZ for all of the action and the arrival of our man Ed Hood in France for PEZ Roadside. 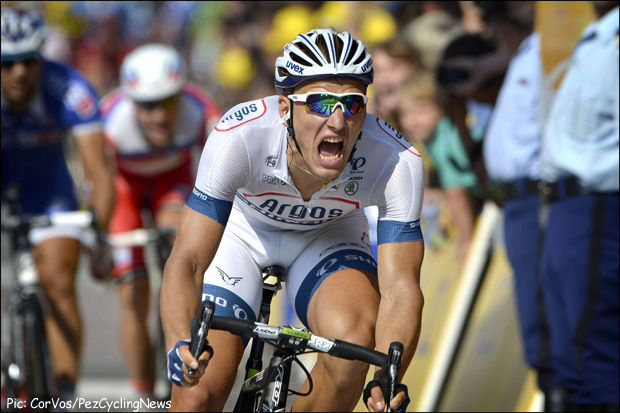