Race report: We’re still in north-west France, in the lovely Manche area, one of the 83 original departments created during the French Revolution while King Louis XVI was trying to save his neck. For today’s knights on shiny carbon, it’s about saving seconds … while some fans took the idea of deposing a newer king too far.

The riders will drop out of Avranches, lonely, one-by-one, and the first half of the course is a bit deceptive; there’s more climbing than the route seemed to suggest, with a couple of lumpy hills. The profile out towards St-Quentin-sur-le-Homme and Ducey looks like a key going into a Yale lock.

The route turns west, then south-west as the riders hit a long drag before dropping down to Précey and Courtils, and then it’s pretty much pancake flat all the way to Mont-Saint-Michel and one of the most recognisable tourist destinations in France.

It’s a stunning islet community – the Church, monastery and God at the top of the hill, the farmers, fishermen and peasants at the bottom. An elegant metaphor for the stars and watercarriers of cycling.

Orica-GreenEdge’s Canadian TT ace Svein Tuft set the fastest time earlier on with 38’04”; Thomas De Gendt bettered that with a 37’30”. And then … the smiling machine rolled through.

Tony Martin might have wiped out in Stage 1 but he was heading back to top speed in the Stage 4 TTT. Normal service was fully restored today with a blistering 54kph average – third fastest ever recorded at the Tour. Greg Lemond and David Millar have gone faster but in different circumstances and on different courses. Still, 36’29” was phenomenal. 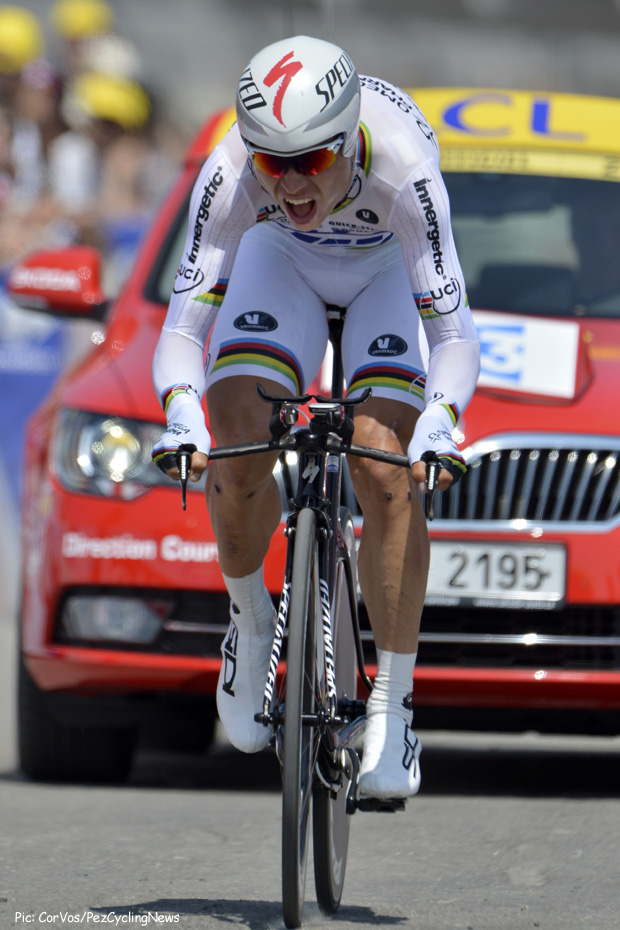 There was a temporary flicker of resistance from Tejay Van Garderen – just nine seconds behind at the first time check, but a whopping 1’40” back just 12kms later and over three minutes down at the line. Ouch.

He wasn’t the only rider to suffer a second-half burn-out; the moral of the story seemed to be if you’re not Tony Martin, don’t try and ride like you are. Save something.

Reports filter in that something distasteful is going down out on the course. Omega Pharma-QuickStep confirm that one or more fans have thrown a bottle of urine at Mark Cavendish. There’s speculation it’s a protest after yesterday’s shoulder clash with Tom Veelers. Cav is not angry but “down” according to his boss Patrick Lefevre.

The fans’ behaviour, if true, is disgusting. No doubt the other sprinters won’t be happy tomorrow because Cav will try and blast them off the planet when the race reaches Tours.

Richie Porte sets off and avoids running over an errant balloon – not everyday you can write that. The tactic for Sky seems to be that there will be no direct pace-setting to relay time splits to Froome. It’s a case of getting their guys round safely, inside the time-limit and having kept as much powder dry as possible.

The tailwind’s picking up as the day goes on which could help to push some of the overall contenders a bit quicker. Chris Froome is spinning the legs around, warm-up coming to a close. This is a big day where he can stretch his overall advantage … to the breaking point of his rivals?

Contador is away, face set in determined stone, a band of red on yellow across the front of his aero helmet. Simultaneously, Andy Schleck trundles through the second time check three-and-a-half minutes down. Roman Kreuziger flies out of the start house. Like his Team Saxo-Tinkoff capo Contador, he looks business-like.

Back in the fifteenth century, the English had two cracks at taking Mont-Saint-Michel by laying siege to it. Looks like the English are back in numbers today (maybe a few Scots, Welsh and Irish as well!) to see Froome’s assault on the citadel. His rival Contador, hurtles along narrow roads; the crowds encroach two or three deep as he passes.

Mick Rogers has done a solid ride, and states with typical Aussie bluntness that today was: “Windy! Very windy!”

Valverde is next to go, before Froome leaves the start house stamping decisively on the pedals. The Brit is on a ride, squeaking by one single second under Martin’s first time split at 9.5kms. Further along the road, Contador spears along, green fields on either side, and the beauitful silhouette of Mont-Saint-Michel on his right shoulder.

The Spaniard comes home in provisional twelth, over two minutes down on Tony Martin. As Contador rolls over the line, Froome is now two seconds up on Martin at the second time check. And internet fora across the cycling world spiral ever deeper into suspicions, recrimination, accusation and outright nonsense.

Roman Kreuziger is home next, just a fistful of seconds slower than Contador. Froome blasts towards six kilometers to go, hugging the right side of the road in the shelter of the spectators.

Ten Dam is home, drool rolling off his chin for a provisional top 20; his buddy Mollema hammers home in tenth. Very impressive from the Belkin duo who put up a good fight.

Valverde does a good ride and is into 11th, but Froome isn’t far behind! He wobbles a little as he powers through one of the final curves, wheels catching a sheen of sand. He’s faded a little and is … second! Martin hangs on to win by 11.65 seconds. 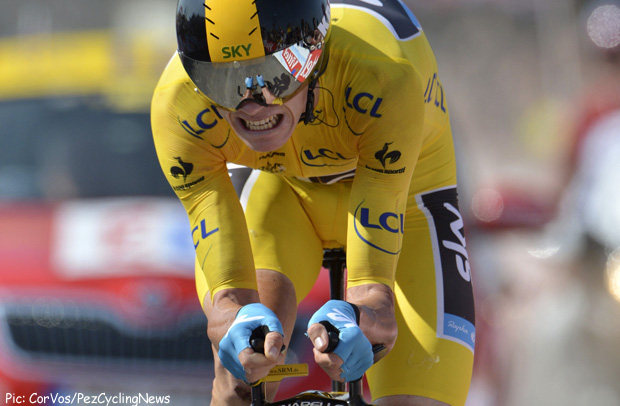 To Martin the stage, to Froome the overall?

Tour Lowdown: The Race Of Truth