Race Report: A hot Bastille day in France, 243km on the menu and a finish on the famous summit of Mont Ventoux – this stage was always going to be a classic. It’s a stage worthy of the biggest champions and today the biggest champion was Chris Froome who put in a possible Tour winning performance on the slopes of Le Géant de Provence.

After two weeks of racing, on a tour where everyday has thrown up a result that was different from the expected one, we’ve now reached the next big monument of the race. Rolling south through the Rhone valley for 243 kms the action is expected to all come in the last 22 kms as the race passes through Bédoin and starts up through the tree-lined section of that most mythical of mountains, Mont Ventoux.

The moonscape section of the last 6kms from Chalet Reynard up past the point where Tommy Simpson died in 1967 and on to the summit finish first won by Charly Gaul in 1958 has provided some of the best and most human stories in professional cycling. It’s fitting that the Tour organizers should choose this fantastic mountain for the 100th edition of the race. The questions before the stage never ceased – Will this ascent follow the form book; will Sky consolidate their lead in the overall; will the attackers try to gain back some time or will a complete outsider such as Tommy Voeckler strike for individual glory on this the most French of days, Bastille Day?

Some great insights from Global Cycling Network on this massive stage.

It’s pretty much a rolling course which includes three 4th category and one 3rd category climb before the big one right at the end. It would seem to favor a breakaway group, full of Frenchmen if possible, but with the race so delicately poised it was unlikely that the main contenders would be happy just to sit back and enjoy the day.

Movistar chased thinking of their man Quintana for the stage win as did Team Europcar in an attempt to get Pierre Rolland over the climbs in first place. The speed for the first two hours had been quite high running off at close to 50kph average helped in no small part by a following wind and the knowledge that if they were to survive off the front all the way up Ventoux then they needed to get to the bottom with about 8 to 10 minutes in hand over the peloton. The wind, traditionally, can be very unpredictable on the upper, more exposed section of the mountain.

The Chase is on
With the early climbs out of the way the breakaway headed towards the sprint point at Malaucéne but the lead was slowly coming down as the peloton was being led by the concerted efforts of Movistar. With Alejandro Valverde (Movistar) losing so much time on stage 13 due to a mechanical at the wrong moment, and possibly a mistake in opting to change the wheel rather than take a teammate’s bike, they’ve actually taken the pressure off team Sky by now riding for their Colombian climber rather than overall victory. Sky was very attentive but it would remain to be seen whether Froome would be content to cover the attacks or go for stage glory himself. He’s a clever calculating rider but the lure of a famous win on arguably one of the three most famous Tour mountains might prove too great to pass up.

50 Kms to go
The Ventoux could now be seen by the riders as it stands out clear in the Provence countryside and can be seen for miles around. It’s an awesome sight and coming at the end of the longest stage it would surely strike fear into the non-climbers. The breakaway riders however were now preparing for the sprint and Peter Sagan was making sure that having been out front all day there was no way he was going to miss taking maximum points. The gap was sitting at 3:35 back to the peloton but there was no way this would be enough when they hit the super-steep section at the bottom of the Ventoux.

As they approached the sprint line Sagan moved to the front closely followed by Chavanel who looked for a moment as if he may attack the Slovak rider in an attempt to save some green jersey points for his man Cavendish (OPQS). In the end Sagan rolled over the line first and picked up 20 points, his main target for the day completed.

The peloton approached the same point some 3:20 back and Greipel (Lotto-Belisol) and Cavendish moved to the front but were content to roll over the line in that order. The riders were conserving their energy for this last mountain of the day and with a brutal last week in the Alps still to go nobody was keen to expend excess energy.

After the sprint Sky came to the front and upped the pace in the main group as they approached the small climb just before Bédoin and this started to see riders like Cavendish and an injured Hesjedal (Garmin-Sharp) let go and slip out of the back. The gap to the break immediately started to come down and it wouldn’t be long before it was swept away. The immense crowd of spectators on the mountain, an estimated 300,000, could sense the approach of the race and was eagerly awaiting the promised fireworks and it looked as if the riders were not about to disappoint them.

The Final Climb
21 kms to the finish and Sylvain Chavanel, a Frenchman on the most French of days, jumped away from the break and quickly gained 30 seconds but as Sky continued to drive behind he only had 1:45 in hand over the main field. Sagan, job done, sat up and along with most of the others began to drift back. As the peloton overhauled Sagan, he popped a wheelie for the tv cameras; there’s no stopping this boy.

Irizar and Riblon set about chasing Chavanel and were sitting about 30 seconds off his wheel as they set into the climb. The peloton had slimmed down considerably but was riding at an even pace as the main contenders eyed each other and Chavanel had only lost about 30 seconds. Sky riders were beginning to drop off and it looked as if Froome may suffer again from a weakened team especially as there was a sea of Saxo-Tinkoff and Movistar riders close by.

Jan Bakelants (RadioShack-Leopard) attacked off the front of the group just as his teammate Andy Schleck went out the back and now riders were dropping out left right and center. The two chasers were caught and Irizar survived for a short while with Bakelants but soon went back as Euskaltel-Euskadi sent a man up the road. Mikel Nieve was their man and he soon made it up to Bakelants but then the real action started back in the peloton.

Quintana (Movistar) attacked out of the group and quickly covered the ground on his way up to Nieve who had now caught Chavanel and forged ahead on his own. Froome was down to two supporters but Sky refused to panic even though they knew the Colombian rider was looking for only five minutes. With 11 kms of the climb left Nieve was six seconds ahead of Quintana and 39 seconds over the main group. Contador (Saxo-Tinkoff) was watching Froome carefully just as Cadel Evans (BMC) was struggling at the back and beginning to slip out of the group.

With 10 kms to go the riders at the front came together and they had 45 seconds over Froome as the yellow jersey was now down to one helper, Richie Porte (Sky). More and more riders were slipping away and the work of Porte was having an effect as Valverde and Rodríguez lost the wheels. Porte continued to push an amazing tempo and the damage was done; he, Froome and Contador simply rode away from the front of the group and were quickly away from the rest.

Decisive Moment
With 7 kms to go Froome attacked and Porte quickly fell away but the big news was that Contador couldn’t follow Froome’s wheel and fell away himself. Up front Quintana had shed Nieve and the Sky leader soon joined the Movistar rider but only for a few seconds. Froome wasted no time in attacking Quintana and initially got away but the Colombian fought back. Twenty seconds back Contador and Nieve were working together with what was left of the group another 50 seconds behind.

With 5 kms to go Froome was getting regular radio updates from his team-car and constantly talking to his DS on the radio as the riders were now on the more exposed slopes where the wind would be a factor and Quintana was happy to sit on Froome’s wheel. With less than 4 kilometers to go Froome dug again but the Movistar rider easily held his wheel. Behind them Nieve was riding for Contador but they were slowly losing time to the two leaders as Froome extended his overall lead. 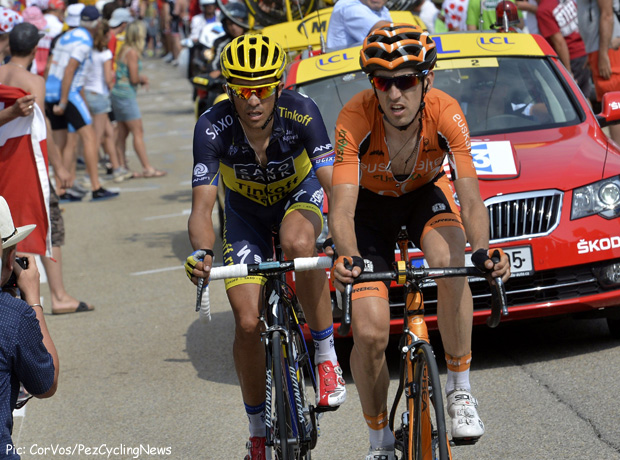 Quintana, in contrast to Froome, rides with a poker face and now came to the front to share the work. It looked as if the winner was going to come from one of these two and Chris Froome desperately wanted to win atop the Ventoux while wearing yellow.

One Kilometer to the Finish
At just over 1km to the summit Froome dug deep into his reserves and managed to shed the Colombian rider with another attack and as he came under the red kite he already had 12 seconds and was moving away. 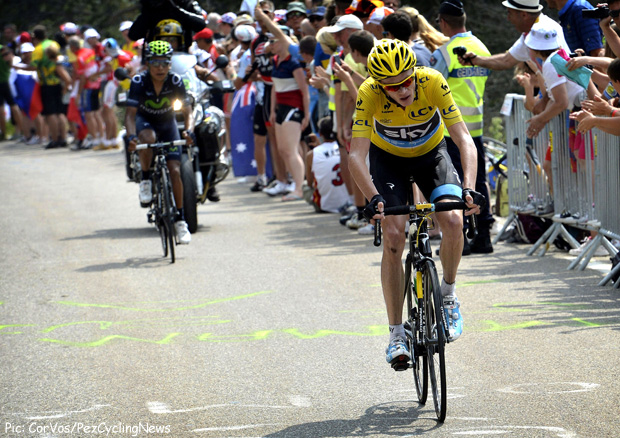 Meanwhile Alberto Contador was 1:12 back and was losing the time he made up on the famous crosswind attack on stage 13.

With his face showing every bit of strain the yellow jersey was now inside the final meters and the Sky leader held his arm aloft as he struggled over the line for a memorable victory to be followed home by Quintana some 25 seconds later. 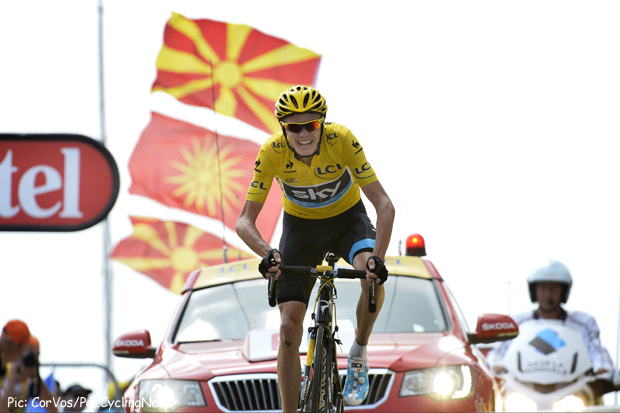 Rodríguez had attacked from the remaining group at the one kilometer to go banner and was up to Nieve who crossed the line just ahead of him. Contador had dropped off and was led across the line by his teammate Kreuziger (Saxo-Tinkoff) one minute and 40 seconds behind the man who is now looking as if he has what it takes to win this anniversary Tour.

What a day of racing on Ventoux! We were treated to the glorious sight of the yellow jersey winning atop one of the most famous climbs in Tour history in the 100th edition and on no less than Bastille Day. It really couldn’t have been better for the organizers unless of course a Frenchman had won….

With the rest day tomorrow the riders now have the Alps ahead of them and although this Tour is far from over Chris Froome must be breathing a little easier as he countered all attempts to displace him at the top of the standings.

It’s been a fantastic race so far…and we’re not done yet! Keep it tuned to PEZ for all the latest roadside reports and analysis.