Race Report: The stage after a rest day can be tricky for some riders, but Movistar’s Rui Costa had no problem’s escaping from the lead group to plummet down into Gap for victory. Behind him the star GC riders fought out for any spare seconds, but the main men are still together for the battle.

Today’s stage 16 was one of those stages that was all action at the start and again at the finish. Alberto Contador showed he was not finished with this Tour de France as he took the fight to Chris Froome on the final climb of the day. His efforts didn’t shake Froome, but Laurens Ten Dam lost his overall place to Nairo Quintana and Jakob Fuglsang lost his place to Joaquim Rodriguez. The excitement just keeps coming.

The Course
168 tough kilometres from Vaison la Romaine to Gap, the Cat 3 climb of the Côte de la Montagne de Bluye starts 12 kilometres from the start and from then on there isn’t a flat bit of road. After the second climb of the Cat 2 Col de Macuègne, which summits after 48 kilometres, there is a log drop to Châteauneuf sur Chambre and from there a long drag takes the race to the finish town of Gap before the last climb of the Cat 2 Col de Manse. From the top there is a drop of 523 metres altitude in 11 kilometres to the finish line. The perfect scenario for an ambush?

Up, Up and Away!
Today was a later start than normal, so at 13:25 CET a nervous bunch headed out of Vaison la Romaine. A big group of around twenty riders tried their best to go from the gun, it included the Green jersey of Peter Sagan (Cannondale) and they had about 30 seconds after 10 kilometres, but a larger group was chasing them, they got together and Ryder Hesjedal (Garmin-Sharp) crossed the line of the first climb first. The group was far too big and in the end it fell apart leaving Adam Hansen (Lotto Belisol) and Andreas Klöden (RadioShack Leopard) out front. A counter attack soon joined Hansen and Klöden to build up a good gap of 5 minutes with 125 kilometres still to ride.

Over the second climb, the Col de Macuègne, Johnny Hoogerland was first at the top and the lead was 6:35.

100 K’s to Go
Into the last 100 kilometres and the leaders had 7 minutes in hand over the peloton which was led by Sky. The time gap had stabilized at 7:30 as they passed through the feed in Châteauneuf sur Chambre at exactly half way (84 kilometres) through the stage.

The lead went up to over 8 minutes because the Peloton had to stop at a rail way crossing in Eyguians, most of the riders took advantage of the break for a pee.

50 Kilometres to Gap
After the train crossing the peloton seemed to lose interest in the escape group and the lead ventured over 9 minutes as the race headed towards the Alps and the decisive 32 kilometre mountain time trial on Wednesday.

At the intermediate sprint in Veynes, with 45 kilometres to go, Thomas De Gendt took the cash, his team mate Johnny Hoogerland was 2nd and Jeannesson 3rd.

34.3 kilometres out and Blel Kadri attacked and Jean Marc Morino got on his wheel, they knew the final climb was not too far away and the peloton was over 10 minutes down. Kadri rode the harder of the two, but the problem was that they could be seen on the long straight road to Gap.

Through the outskirts of Gap, before the climb of the Col de Manse, Kadri and Marino only had 20 seconds on the chasers as the main field were now at 12 minutes.

The Final Climb
The Col de Manse kicks up from the 20 kilometre to go banner, Adam Hansen crossed to the two leaders which split the chase group. Hanson pressed on dropping Kadri and Morino, but behind Nico Roche was at the front taking Velits and Coppel away from the others. Rui Costa was next to put the pressure on leaving the others behind. Dani Navarro tried to stay with the Portuguese rider as Roche was trying to distance the others, but no one was keen to let anyone away. 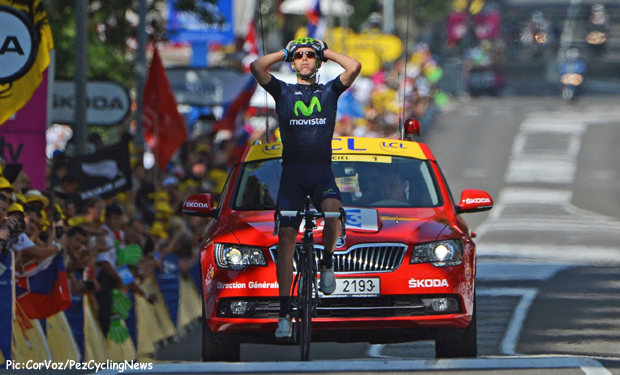 A happy Rui Costa takes the win in Gap.

Costa pushed on as the others couldn’t get it together to make a proper chase as they kept attacking each other. In the end it was Coppel, Klöden, Jeannesson and Riblon were making the effort to catch Costa.

Katusha attacked the Yellow jersey group, but Sky pulled them back. The strength of the Katusha riders split the head of the peloton, taking Froome, Porte, Contador, Kreuziger, Valverde, Quintana, Mollema and Rodriguez clear of the others. Ten Dam and Fuglsang missed the move.

At the top; Costa had 50 seconds on Coppel, Klöden, Jeannesson and Riblon, the others from the chase were well out of sight.

Alberto Contador was keen to show his strength and attacked the group twice, both times Porte had the measure of him and pulled the Spaniard back for Froome. Contador gave a third attempt and Porte was finished and Froome had to do the work for himself. Next Kreuziger tried to pressurize the Sky rider, but the group crossed the summit together. 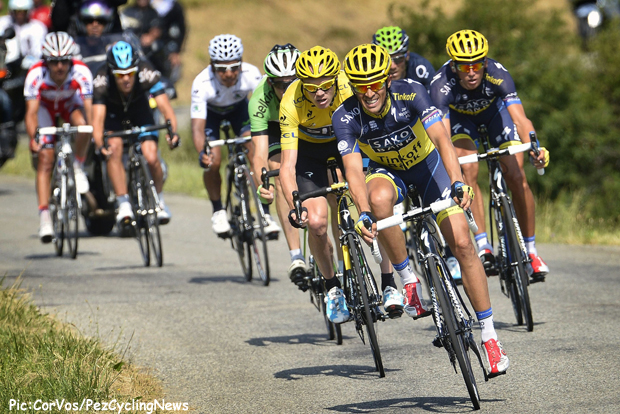 Contador leads Froome down into Gap, before the crash.

Rui Costa pulled out everything he had into the final kilometre to hold the four behind him at bay. He raised a fist at the camera in the last metres as he knew he had the stage under his belt, Riblon won the sprint for second ahead of Jeannesson and Coppel with Klöden freewheeling over the line.

On the descent where Lance Armstrong rode across a field and Joseba Beloki crashed, the Yellow jersey group was led by Contador, but Froome was welded to his wheel. Just before that famous corner; Contador slid to the ground and Froome took the grass verge, both were up quickly and Porte waited for Froome and the three chased back to the others. 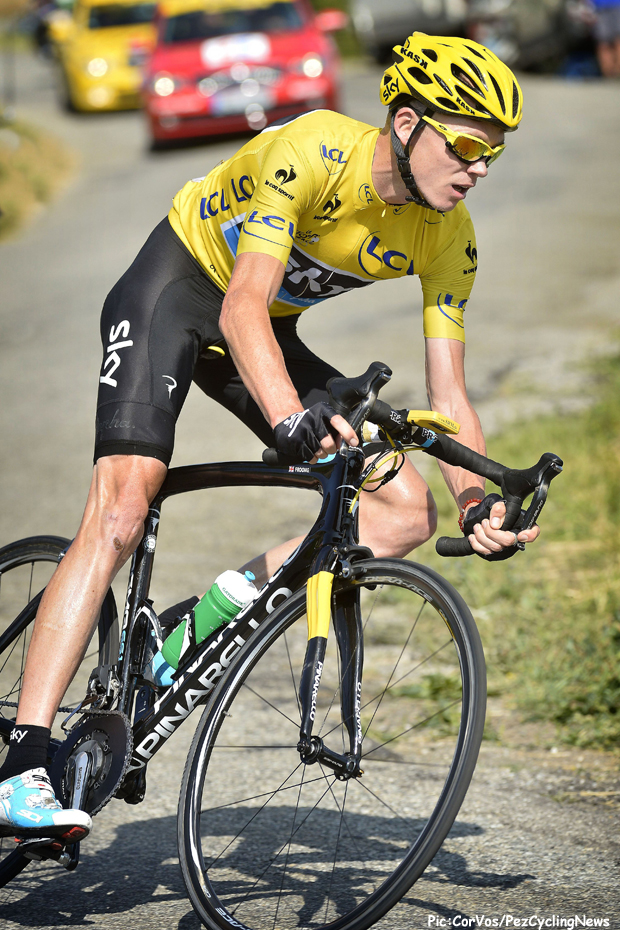 Down onto the main road to Gap and Froome gestured to Contador to come through but Porte had done enough to pull the important riders together.

Valverde became the pace setter to pull Quintana (and the others) away from Ten Dam aand Jakob Fuglsang, both of whom are the big losers of the day. Rodriguez won the sprint from Quintana and all the others were together.

The next group had Laurens Ten Dam (Belkin), Cadel Evans (BMC), Jakob Fuglsang (Astana) and Dan Martin (Garmin-Sharp) and the rest of the riders were still on the mountain. Quintana jumped over Ten Dam and Rodriguez did the same to Fuglsang on the overall as the others stayed the same.

Another day of excitement on a great Tour de France, keep it PEZ for Ed’s day down on the road side.