Race Report: The French have not had a good Tour so far, but if you are going to win a stage it might as well be the one that crosses the Alpe d’Huez twice and become the hero of France. Meanwhile behind Christophe Riblon who was fighting for the stage win a hard battle amongst the GC riders saw yet another change in the overall with riders falling by the wayside.

A hard day like today can end in deadlock between the main overall protagonists, but that wasn’t the case as we had attacks, re-groupments, hunger knock, crazy descents and heroism on the bike. Christophe Riblon came out on top for the stage, Nairo Quintana moved strongly up the overall and Chris Froome suffered hunger knock but protected his yellow jersey from the Spanish/Colombian onslaught. 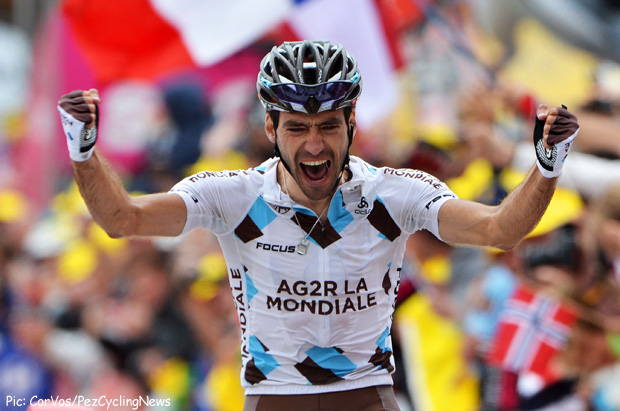 Twice over the Alpe d’Huez, sounds tough and the build up to the mega climbing isn’t easy either. Out of Gap they climb the Cat 2 Col de Manse which tops out 13 kilometres from the start, then the Cat 3 Rampe du Motty after 45 kilometres, then Cat 2 Col d’Ornon after 95 kilometres. From then on the race will be a world of pain for everyone. Up the HC Cat Alpe d’Huez for the first time, followed directly by the Cat 2 Col de Sarrenne which is 3 kilometres long. The fast and dangerous descent into La Ferriére could be decisive, but the second climb of the Alpe with its twenty one hairpins will show who has it.

A very Fast Start
The attacks came from the gun and from just about every team, Saxo-Tinkoff were very keen to get riders up the road and Sky were just as keen not to let them. Jésus Hernandez (Saxo-Tinkoff) put in a big effort to soften thing up, but Sky’s Peter Kennaugh closed him down. Riders were taking turns to attack and even at one point it looked like Roman Kreuiziger and Alberto Contador were making a move & this forced Chris Froome to jump after them.

Garmin-Sharp’s Giro winner Ryder Hesjedal gave a good dig at the front but he also was not allowed any space and the incessant attacks continued. All this action jettisoned a lot of riders from the peloton and there was still 160 hard kilometres of the 172.5 kilometre stage to go.

Eventually a group did get away on the drop from the Col de Manse and things calmed down a little, allowing some of the dropped riders behind to get back to the Yellow jersey group with Sky in charge. Dan Martin (Garmin-Sharp) was one of the riders in the wrong place when the action started, but the young Irishman was in the regroupment of the peloton.

On the climb of the Rampe du Motty; Nico Roche and Sergio Paulinho tried to cross to the leaders to give Saxo-Tinkoff a presence up front, but it was a tall order as Sky had five riders on the front of the bunch stretching it out in one long line in pursuit and the escape group were over 6 minutes up the road with 112 kilometres still to race.

100 K’s to Go
The break of 9 had 4:50 on Roche/Paulinho and 7:04 on the bunch, the Saxo-Tinkoff tandem were not making any headway and had obviously been sent up the road to help Contador and Kreuziger later in the race, but you have to wonder how much use they would be after riding out front for so long.

At the top of the Col d’Ornon (Cat 2) with 77.5 kilometres to go; Arnold Jeannesson was first ahead of Chavanel and Voigt. Roche and Paulinho were nearly 3 minutes back and the yellow jersey peloton was at 7:40. Many of the sprinters were still in the group coming to the intermediate sprint in Bourg d’Oisans at the base of the Alpe d’Huez, Cavendish, Greipel and Sagan were still there and it was the German who took the points for 12th place.

The escape split on the descent with Moser, Chavanel, Van Garderen, Boom and Riblon, but the others got back as all 9 hit the start of the Alpe d’Huez together. Meanwhile back with the chasing Saxo duo, Paulinho headed off up the mountain on his own as the Irishman dropped back to the peloton.

The First Time Up the Alpe
Tejay van Garderen and Riblon attacked form the escape as Roche was pulled back by the peloton. Van Garderen wanted to ride the Alpe solo and dropped Riblon, the peloton were riding steady as Sky still had four riders on the front for Chris Froome, they soon pulled back Paulinho. The pressure also caused the dropping of Cadel Evans (BMC).

Thomas Voeckler (Europcar) attacked to take team mate Pierre Roland clear of the bunch to be joined by Wouter Poels (Vacansoleil-DCM) and Mikel Nieve (Euskaltel-Euskadi) in the KOM jersey. Andy Schleck (RadioShack Leopard) jumped from the bunch to the Voeckler group and went straight to the front and Voeckler couldn’t hold the pace.

Moser couldn’t hold onto Riblon and Van Garderen and was dropped on the short climb of the Col de Sarrenne but then on the descent Van Garderen had chain problems and had to stop, Moser re-caught Riblon and we had two riders out front again. Schleck led his group over the top for the crazy drop to start the Alpe again. Riblon showed how tricky the descent was by taking to a ditch on one of the tight corners but luckily he was unhurt but clearly shaken.

Contador could see that there was a possibility of splitting the group on the descent and shot up the inside of the Froome train & he joined Kreuziger who was just ahead and the two pushed on.

Into the valley; Moser and Riblon were leading, Van Garderen was 30 seconds behind them, then next was the Schleck (no Roland) group at 6:19, Contador/Kreuziger at 7:29, then Froome and Quintana at 7:45.

Contador and Kreuziger had a discussion and decided not to push on this early and waited for the Froome group. Van Garderen had sorted his chain problem and got back to the two up front and Rolland got over his fear of the descent and rejoined the Schleck group.

The Second Ascent
Moser was the first to be dropped as Riblon put the pressure on at the front as Movistar took control of the bunch for Quintana, this finished any hope for the riders with Andy Schleck as they were pulled back. Jens Voigt had been in no man’s land and caught Moser and was now in 3rd place on the Alp chasing down van Garderen and Riblon. 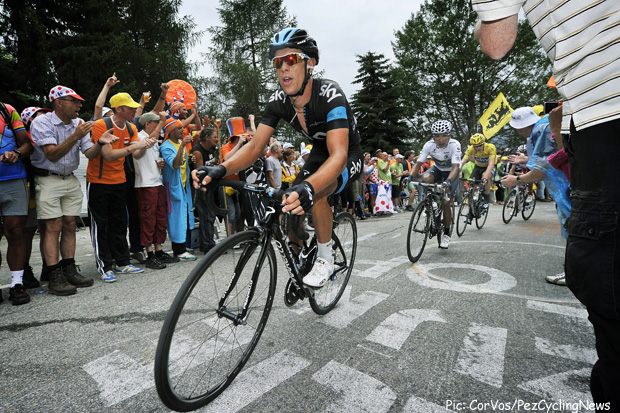 At the base of the Alp with the peloton Richie Porte took to the front with Froome on his wheel, this put Bauke Mollema (Belkin) in trouble, but all the other GC men were safe. Froome attacked to bridge over to Valverde who had gone earlier. The first attack showed his intentions, but they all got together again behind the Sky arrow.

Again Froome attacked and Porte let the gap go, Quintana closed to him, but Rodriguez, Moreno, Contador and Valverde couldn’t, Kreuziger was dropped. Moreno dragged Rodriguez away and Purito got on the wheel of Froome, Contador was in trouble and was getting no help from the others. Valverde jumped away from Contador taking Porte with him. 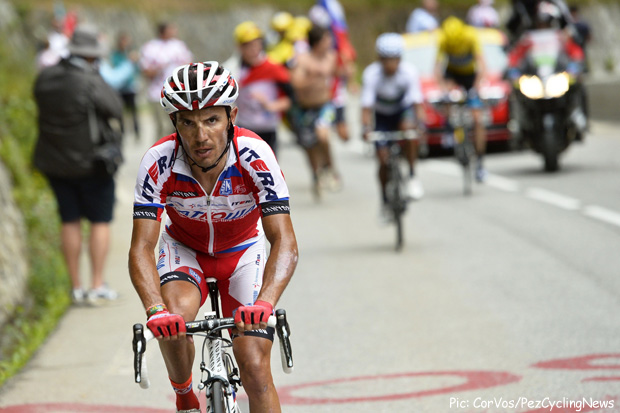 Rodriguez attacked Froome and Quintana, the boy from Kenya was visibly suffering, but held a good pace to stay with the little Colombian. On a short, steep section Quintana left Froome, but they were still within metres of each other.

Kreuziger managed to get up to Contador to help his leader, but it was too late, Richie Porte also got to his leader to ride on the front yet again as Froome was suffering.

The Alpe Finalé
Up front; Tejay van Garderen was pushing his way to what he thought would be his big win with 4 kilometres to go, at the same point Froome had his hand in the air and Quintana attacked with Rodriguez on his wheel. Froome needed food from the car, so Porte went back for it as any feed at this point would receive a penalty.

Riblon was trying to come back to Van Garderen with 2 kilometres to go, Quintana had Rodriguez on his wheel as Porte towed a suffering Froome onwards and upwards. Van Garderen cracked and Riblon jumped passed him and put all he had left into giving France its first stage win for this Tour de France.

Christophe Riblon was ecstatic with his win as were the French on top of the mountain. Van Garderen rolled in a disappointed minute later with Moser at 1:27. Quintana out sprinted Rodriguez for 4th, next over the line was Porte and Froome at 3:19 with Valverde next to them. Contador was with Nieve and Fuglsang at 4:16 and Kreuziger just behind him.

A great day for France and Riblon, Quintana showed he has the fire for more attacking, Rodriguez is getting stronger, Froome is human after all and Contador faltered at the most important point. 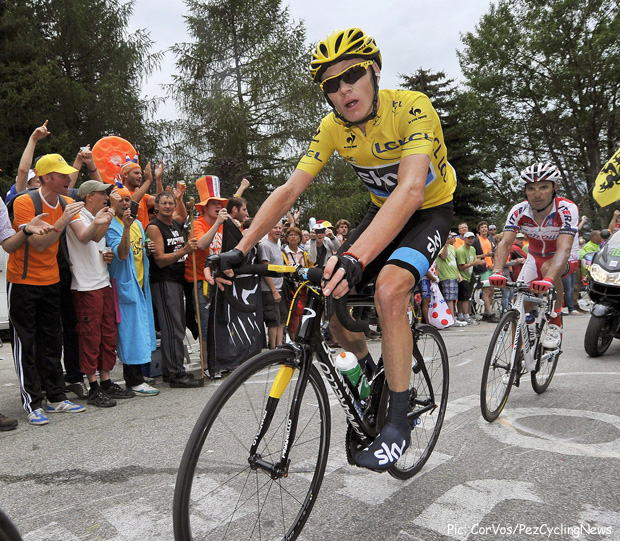 It was a tough day for Froome today but he still put time into the majority of his rivals.

The Tour is not over, but it’s another step closer to Paris, keep it PEZ for all the Tour news and more from Ed on the French roadside.