Race report: It’s an absolute beast of a day at the Tour de France. Right from the flag it’s up, up, up with the Col du Glandon an immediate leg-snapper. Next is the Col de la Madeleine making it consecutive Hors Categorie climbs – and that takes us just to halfway! But is it all too hard?

It’s pretty much south-north today starting in Bourg d’Oisan and making for Le-Grand-Bornand, but it’s not quite the tourist picnic you’d think. Five classified climbs lie in wait for an exhausted peloton.

The attacks start right away with Lotto-Belisol’s Lars Bak and Jon Izagirre (Euskaltel) but it’s last year’s Giro d’Italia champion Ryder Hesjedal who makes things stick. Eventually it’s Hesjedal and the Basque who are clear with a huge chasing group fracturing and reforming behind them.

The Col du Glandon is not so steep in terms of gradient at 5.1% but it’s a full 21 kilometers of uphill slog and the Canadian is first over with Izagirre right behind as he hauls a jacket on. There’s still a chase involving the likes of Riblon, Cunego, Moser, Gesink and Hoogerland, but the situation’s a bit confused.

Onto the Col de la Madeleine – a morale-bending 19 kilometers at all but 8% – and Izagirre is suffering. Rolland jumps the chase group and catches Hesjedal, slipping past for the points at the top. Still no action of note in the main field. Is today just a mountain slog too far? Tomorrow’s going to be a knock-down, drag-out, bare-knuckle brawl, a thought lingering in the backs of minds. The yellow jersey mob are a good ten minutes behind the leaders now.

Onto the second-category Col de Tamie – 8.6 clicks at a nudge over 6% – and Hesjedal has gone backwards, out through the chase group, as Rolland grinds to more King of the Mountains points. Heading through yet another pretty Alpine village, Pierre Rolland is totally committed to the solo endeavour. With 50 kms to go he gives his left leg a quick on-the-go massage before narrowly avoiding an errant photographer on the road. The Frenchman pushes on, his face scarred with a pained grimace.

The main body of the peloton is together with Saxo-Tinkoff and Sky at the front. Ahead, rolling into Faverges, Rolland glances up to see a stunning wire-mounted ‘ghost rider’ swinging through the air beside him. Weird … but very cool. The Europcar man grinds on, and the chase is not really making much impression. The peloton is having a bit of a ceasefire, although Saxo-Tinkoff come forward and lift the tempo. 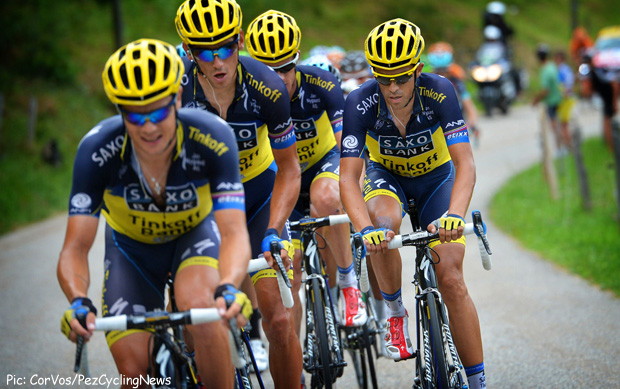 41km to go and Rolland is clawing his way up the Col de l’Èpine which gets steeper and harder all the way up. Behind, Thomas, Stannard, Siutsou and Kennaugh are ejected from the Sky train by Saxo-Tinkoff’s forcing. Rolland takes another fistful of points at the top and pulls himself closer to that aberration of the all-polka-dots ensemble once again. As one, mankind shudders at the thought.

Rolland picks his way round a baffling looking sequence of traffic furniture at a roundabout and sets out on the last climb. 11 kilometers up the Col de la Croix Fry, but it’s 7% and it’s going to hurt.

The chase group is eating itself, a minute behind Rolland. Dani Navarro (Cofidis) is first to go, chased by Rui Costa (Movistar), Lotto-Belisol’s Bart de Clerq and Mikel Nieve of Euskaltel. Costa goes away as Rolland really starts to pedal squares; the Portugese just whips right by the struggling Europcar rider and sets off in the gloom. 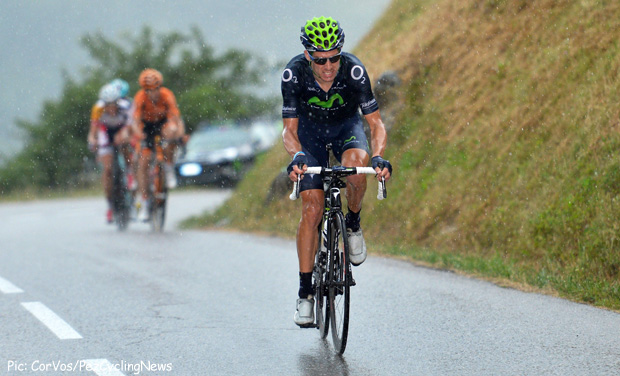 De Clerq, Bakelants and Kloden (RadioShack Leopard Trek) and Navarro (Cofidis) are in pursuit of Costa, chasing at 33 seconds as the rain gets heavier.

Costa now has a look of agony/ruthlessness on his face as he ploughs on. He’s got 51 seconds on the chasers who look as though they’re riding along the bottom of the seabed. It’s now very wet and very dark.

With one Movistar rider (Costa) off the front, now Valverde attacks the yellow jersey group. But Froome and his rivals are over nine minutes behind, so it’s for show and the chance of the top ten in that order from Valverde. John Gadret (Ag2r-La Mondiale) comes up to Valverde now, sloshing through the incessant downpour.

Costa tops the last hill and plunges towards Le-Grand-Bornand. He’s alone so he can choose his own line and he’s got a healthy minute to play with. Looking good for a second stage win in a week as the road starts to dry up under ten kilometers to go.

Behind, the overall contenders are still climbing and Rodriguez (Katusha) jumps. Contador goes with him … then Quintana (Movistar) … then Froome (Sky). Up front, Costa flies under five kilometers to go, with Andreas Kloden chasing at one minute. Costa jabs his finger in his ear, calling for a time check on Kloden as he zooms under two kilometers to go.

With the contenders for the overall now descending, Froome is on the front dictating the speed. 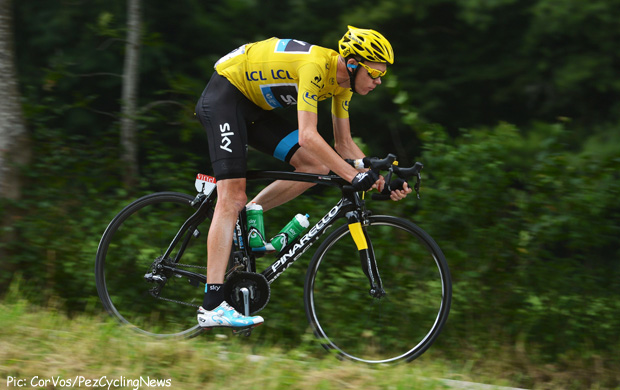 At the head of the race, Costa has nothing to worry about and exchanges a jubilant celebration with the Movistar team car before cruising to the latest in a series of very impressive wins this season. 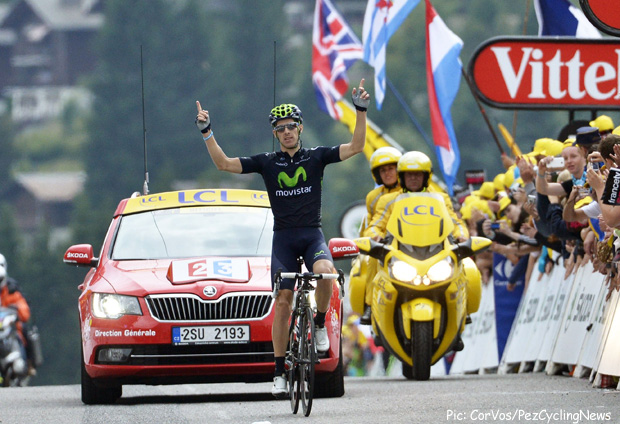 Kloden is home in second and Jan Bakelandts jumps clear for third. Dani Navarro’s good day out catapults him into the top ten tonight.

The ‘top guns’ finish more or less together in a bit of a stalemate. Froome is closer to the overall win, but tomorrow is a firestorm of a stage to Annecy-Semnoz; will Contador and Saxo-Tinkoff pull a miracle out of the hat? Will Quintana go on the rampage? Stay tuned to Pez to find out!