The forecast was for a win for a rouleur/sprinter such as Sagan who would take the stage win from a small breakaway group but despite a mighty effort from Cannondale they could do nothing about the little man from Radioshack who saw his chance and grabbed it with both hands.

How It All Began.
After the chaos of yesterday’s finish with a stuck bus, an ever-changing finishing line and a multiple pile-up it was a relief to see all riders sign on this morning albeit with some – like the heavily bandaged Tony Martin – still feeling the full effects of their wounds. As the flag went down a break quickly formed which contained Biel Kadri (AG2r-La Mondiale), David Veilleux (Team Europcar), Ruben Perez (Euskaltel-Euskadi) and for the second day in a row Lars Boom (Belkin Procycling Team). 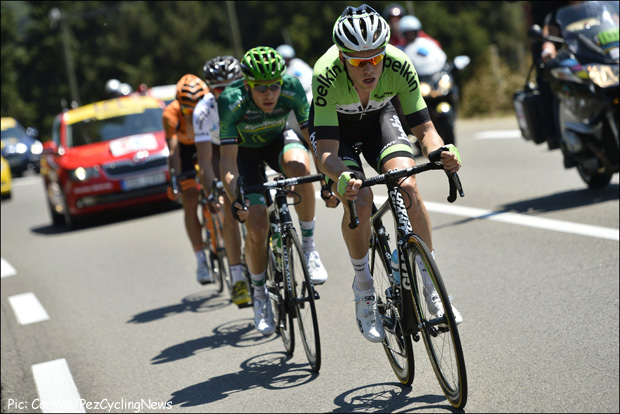 The break quickly gained a lead and by the sprint point at Castello-Di-Rostino they were close to three minutes ahead. The sprint was uncontested by the group and went to Boom but when the peloton came through the sprinters came to the front to fight for the remaining points with Greipel taking it from Sagan and Cavendish.

The time gap continued to grow slowly but the sprinter’s teams were all over the front of the peloton and were controlling the speed in order to keep their men in the hunt for the finish. If the break could be controlled and the other teams discouraged from doing anything courageous then the sprinters could make up for missing the finish yesterday.

This all went to plan and by the time the break were approaching the summit of the first climb, the Col de Ballagranajo, despite working consistently, they were only 1:44 ahead. As the peloton hit the lower slopes the major GC contenders moved to the front but they were just thinking about not losing any time should there be a crash rather than launching any attacks. Up ahead the breakaway group were jockeying for position as the summit approached. First to go was Veilleux but this was quickly covered by Kadri and Perez. Veilleux tried again, then Kadri again but it was the big cyclocross rider who showed them a clean set of cleats as he fired over the line to take maximum points…well one point as that’s all that was on offer. The peloton rolled over at 1:06 with the GC teams being attentive on the descent.

The Action Starts
Onto the next climb of Col de la Serra with 76 kms to go and the steeper gradient saw a split in the breakaway as Boom and Perez were left behind but it was when the peloton hit the slopes that the major action of the day really started. Up until now the sprinters had been looking quite content as the pace wasn’t too high and everything was going to plan but the FDJ.fr team of Marc Madiot obviously had their own script. They upped the pace considerably and we began to see Cavendish, Martin and Kittel sliding out of the back. They didn’t look too concerned as they knew there was a 25kms descent so if they could stay in contention they would be able to get back on.

They hadn’t counted on the ever-youthful Frenchman Tommy Voeckler who attacked though and was soon blasting past Boom and Perez. In what began to look like a planned move Veilleux slowed and waited for Voeckler leaving Kadri to forge ahead. But it wasn’t to be for Europcar as FDJ.fr just kept on riding and he and his teammate were soon caught.

Onto the false flat on the run-in to the third climb, the Col de Vizzavona and Kadri held a slim lead over the remains of the peloton with the yellow jersey group at two minutes and heading in the wrong direction. Kadri was unlucky to suffer an unshipped chain and got going again with the peloton in sight but the adrenaline kept him ahead by 10 seconds. The first GC rider to show was Rolland (Europcar) as he jumped off the front and was quickly up to Kadri and away. Sky didn’t panic and continued to ride their pace as Rolland went for the summit. Rolland took the climb ahead of Kadri some 34 seconds ahead of the peloton while behind the group of Kittel were losing even more time and were now at five minutes.

On the descent it soon became clear that the lead was going to change hands today and Rolland decided to conserve his energy as he sat up and waited for the peloton which was now being driven by Cannondale, BMC and Sky for Sagan, Gilbert and Froome. On the long descent and run in to Ajaccio the Kittel group continued to lose more time and talk turned to who the new leader might be when the race finished alongside the beach.

Sky hit the climb first but it was that most aggressive of riders Flecha who was the first to attack. He was quickly joined by Gautier (Europcar) just as Rolland had a problem at the back. They quickly gained 10 seconds over the bunch which was being led by Richie Porte (Sky) but everyone gasped as Chris Froome himself attacked off Porte’s wheel. He started to cover the distance but was soon brought back by the work of Evans (BMC) and Rodriguez (Katusha) amongst others.

As they came off the descent Gautier still had a slender lead and was fighting a 20 kph cross-wind as gaps began to appear in the chasing bunch. The Europcar rider was soon picked up as birthday boy Chavanel (OPQS) had a go. He was quickly joined by Flecha and four others including, everyone thought initially, Irizar of Radioshack.

With 5kms to go the break began to pull clear as nobody behind wanted to help Cannondale bring Sagan to the front. It could have all ended so differently as a small white dog darted out into the road just after the break had past. It stopped in the middle and it looked as if the peloton would run straight over it but at the last second it scurried off to the side and the bunch flashed by now being led by Garmin-Sharp who were thinking of their man Millar for the overall.

With only 1.5kms to go the break slowed and the Radioshack rider took his chance by giving it all he had. He kept a slender lead as the rest of his group was overhauled by the now charging peloton and it looked as if he couldn’t survive but none too soon he came across the finish line to take a superb win from the charging Sagan and it was only at this time that we all realized he was in fact Jan Bakelants. 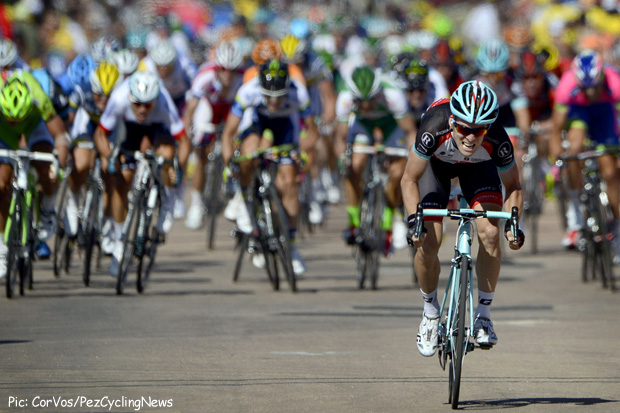 He had the smallest of gaps so was given the win by 1 second which meant possibly his greatest ever day because now he was in yellow. David Millar is second overall by one second and if there are no fireworks tomorrow then he could be in the lead after the team time trial in Nice on Monday.

The way this Tour is shaping up though, don’t count on tomorrow being a boring stage. Stay tuned to Pez for all the latest action. 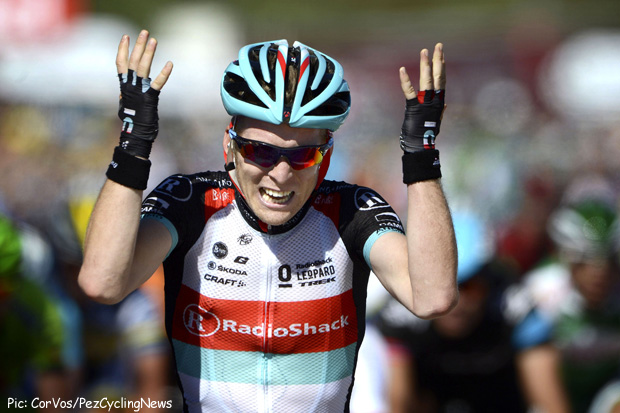 Lotto Belisol: Our chef Peter Cambré talks about his job in the Tour