Race Report: Today was “Last Chance Saloon” for the top riders to change thing in the GC and that’s exactly how it panned out. Alberto Contador had a bad day and dropped off the Tour podium. Young Nairo Quintana won the stage and will have tears in the eyes of his family back in Cóbita for his second place overall.

On the last mountain of this Tour de France; Movistar’s young Colombian Nairo Quintana rode away from Chris Froome, Joaquim Rodriguez and Alberto Contador to win stage 20 and move into second place overall in the 100th Tour de France. Rodriguez threw his hat in the ring and took second place on the stage and more importantly pushed his countryman Alberto Contador off the third podium step. A day of GC change and bad news and disappointment for Alberto Contador. Chris Froome came home safe in the Yellow jersey with a punch in the air as he crossed the line. 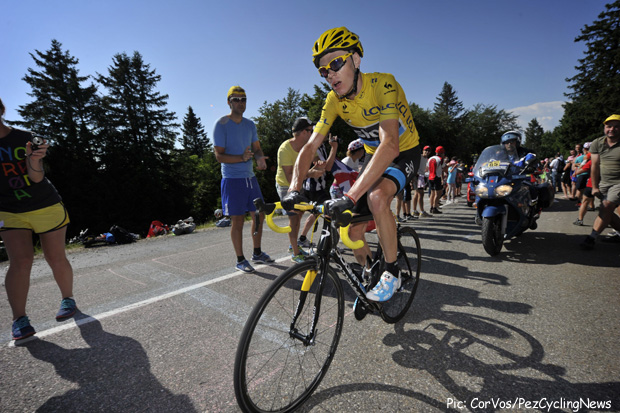 Chris Froome did enough today to guard his lead and wear yellow into Paris tomorrow.

The Day’s Course
The six categorised climbs in the penultimate stage were planned for a stunning but torturous finalé for this year’s Tour. Three Cat 3, one each of Cat 2 and Cat 1 and just to end any hope for the frail, there is the summit finish on the HC category Col de Semnoz. The road from Annecy to Le Semnoz is 125 kilometres long and that last climb of 10.7 kilometres has an average slope of 8.5% with the worst section at 10.5%, topping out at 1,655 metres altitude.

So what did the last mountain stage look like? Here is the Tour De France 2013 Stage 20 Fly Through by globalcyclingnetwork:

The First Attack of the Day
We didn’t have to wait long for the first attack and it came from Pierre Rolland (Europcar) who wants the KOM jersey for himself, he is wearing it, but is 1 point short of Chris Froome who had 104 points at the start (Quintana on 97pts). Rolland was soon joined by Marcus Burghardt (BMC), Juan Antonio Flecha (Vacansoleil-DCM) and Jens Voigt (RadioShack Leopard). Another group of five was chasing and a late effort from Igor Anton (Euskaltel-Euskadi) got him across, the peloton which wasn’t very interested in a chase this early in the day. Sky was controlling things at first, but Movistar took over as the first climb, the Cat 2 Côte du Puget, started to hurt the legs.

The Côte du Puget (Cat 2)
Rolland was first over the top ahead of Flecha, the next group wasn’t far behind, it included; Igor Anton & Mikel Astarloza (Euskaltel-Euskadi), Pavel Brutt (Katusha), Simon Clarke (Orica-Green Edge), Christophe Riblon (Ag2r-La Mondiale) and Cyril Gautier (Europcar). The ten riders got together with 109 kilometres to go as the Movistar led peloton was at 1:36.

The Col de Leschaux (Cat 3)
The second climb of the day came just 5 kilometres after the first. Cyril Gautier tried to lead his team mate Pierre Rolland out for the mountain points, but Anton jumped them for first, Rolland second. This split the escape, but they regrouped on the descent and Movistar held them at just over 1 minute.

The intermediate sprint in Le Chàtelard came after 33.5 kilometres and it was Flecha a good two bike lengths ahead the others. Back in the peloton Sagan, Greipel and Cavendish made little effort for the points and it looks like it will be a Green Peter Sagan in Paris tomorrow.

Côte d’Aillon-le-Vieux (Cat 3)
Pierre Rolland had no problems taking the points as no one was interested and the Europcar plan to put him in the white and spotty jersey in Paris was working well. I’m glad to report he was wearing his black team issue shorts and not those terrible KOM shorts.

Col des Prés (Cat 3)
There was a false flat from the Côte d’Aillon-le-Vieux to the start of the Col des Prés, the climb its self is only short at about 4 kilometres and again Gauthier did the lead-out for Rolland. Igor Anton had other ideas and tried to come round Rolland’s right shoulder. The Frenchman moved from the middle of the road to the right and Anton was nearly in the fleeing spectators. I’m sure the French commissars would have missed it, but the little Basque, Anton, had words, but there were no hard feelings.

Mont Revard (Cat 1)
After the descent to Saint Jean d’Arvey (64 K’s to go) the 1st Cat climb of Mont Revard rears up ahead of the race. 16.5 kilometres long and climbs just under 900 metres. Lens Voigt pushed on at the base of the climb which blew out Rolland, Gautier and Anton. Voigt had the bit between his teeth and dropped everyone, behind the World champion; Philippe Gilbert pulled his BMC team mate Tejay van Garderen away from the bunch.

The BMC tandem caught the leftovers from the break, although Gilbert and Gauthier couldn’t hang on as van Garderen and Burghardt put the hurt on. Burghardt eventually cracked leaving van Garderen, Rolland, Riblon and Clark chasing the soon to be 42 year old Voigt with Anton between. Rolland group eased and Gilbert &Co got back to them and they were joined by Alexis Vuillormoz (Sojasun).

At the top of the Revard; Voigt was first with Anton 38 seconds later, Rolland was third with his group at about 2 minutes and the peloton was at 3:02. A bit of bad luck on the descent for Roman Kreuziger (Saxo-Tinkoff) in the bunch with a rear puncture and Philippe Gilbert in the break with a tangled chain.

Under the impetus of the three BMC riders; Igor Anton was pulled back in the valley between Montcel and the start of the final climb of the day in the town of Quintal, Voigt had 1:20 on the chasers and 3 minutes to the peloton with 20 kilometres to go. Movistar had been doing most of the work, but at this point Katusha started moving riders to the front for Joaquim Rodriguez.

The Col de Semnoz (Cat HC)
Jens Voigt was first on to the last climb of this Tour de France. The bunch started to liven up and Sky put their riders to work on the front. Movistar, Belkin, Omega Pharma – Quick-Step were not far behind the Froome team.

In the chase group van Garderen attacked with Rolland and Vuillormoz on his wheel.

The Sky team had put the foot heavily on the accelerator and blown many riders out the back; Evans, Schleck, Mollema and Kwaitkowski amongst others and with 10 kilometres to go they had Rolland, van Garderen and Vuillormoz back.

Voigt was caught with 8.5 kilometres before the summit. Rodriguez made a soft attack, taking Quintana, at that Chris Froome shot up too and past the Catalan and the Colombian. The two pulled him back, but the damage had been done to Contador who was left with just Richie Porte for company.

Rodriguez looked back and couldn’t see Contador, so Purito and Quintana started ride hard to take time from the man from Pinto. 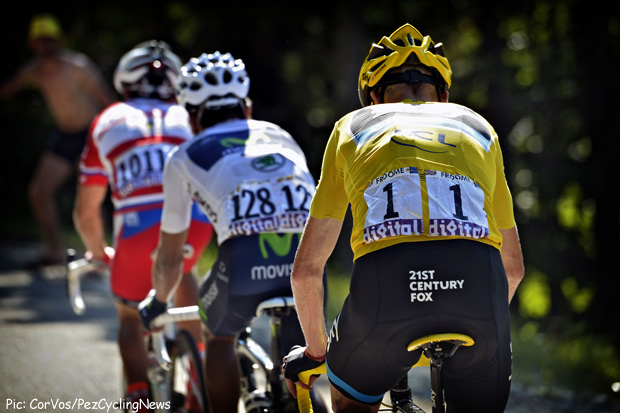 Kreuziger found strength from somewhere and got back to his leader to try and help save Alberto’s podium place. With 6 kilometres to go, Quintana had moved into second overall and Rodriguez was very close to jumping over Contador for the lower place on the podium. Quintana needed 22 seconds and Rodriguez 48 for them to usurp Contador, Rodriguez was only 14 seconds from Kreuziger. Alejandro

Four kilometres left and Contador had lost 1:17 and was in virtual 4th place overall, anything happening behind was unimportant by this point. Andrew Talansky (Garmin-Sharp) managed to get up to the Saxo-Tinkoff train and was on a great ride climbing his way up the General Classification and doing enough to make the top 10.

Rodriguez had been doing all the riding at the front, but had the most to gain, 1K to go and Froome put in a big move, but Quintano had him and jumped for the stage win. The White jersey soared up the Semnoz, Rodriguez dropped Froome for second, but none of it mattered as the overall win will be Chris Froome’s.

Alejandro Valverde had been in no man’s land and managed fourth and we had to wait to see what the stop watch would tell us as first Porte, then Talansky came home before Contador. 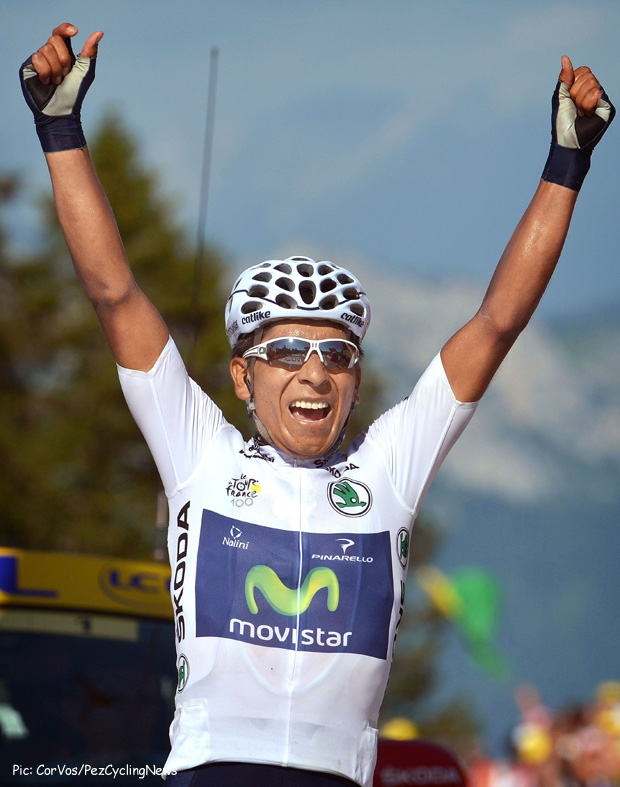 After the finish Nairo Quintana agreed “it was a great day for Colombia, his parents, his girlfriend and all his friends back home watching on TV.” Twenty three years old, second in the Tour de France, Best Young rider and King of the Mountains, he has a big future ahead of him.

Chris Froome will go into Paris tomorrow in Yellow for the big 100th Tour de France celebrations; keep it PEZ!