Race Report: The fight for the jerseys are over at the Tour de France but there was one last battle today that remained – victory on the famous Champs Elysees.

And so we’ve come almost full-circle on what has been, arguably, the most exciting Tour de France in recent history. The organizers put together a parcours for this year which they hoped would produce spectacular racing and every stage has done just that, although not always in the way that was planned.

Last year’s Tour was won by employing ‘marginal gains’ but the actual racing turned out to be quite boring from the spectator’s point of view and it was feared that this year could suffer the same fate. However, from the start in Corsica (which produced superb racing), through the Pyrenees, onto Brittany, over the top of the Ventoux and on through the Alps to today’s start in Versailles we have had a full-on race every day and the riders will now be looking forward to the Champs-Élysées and a well deserved rest. 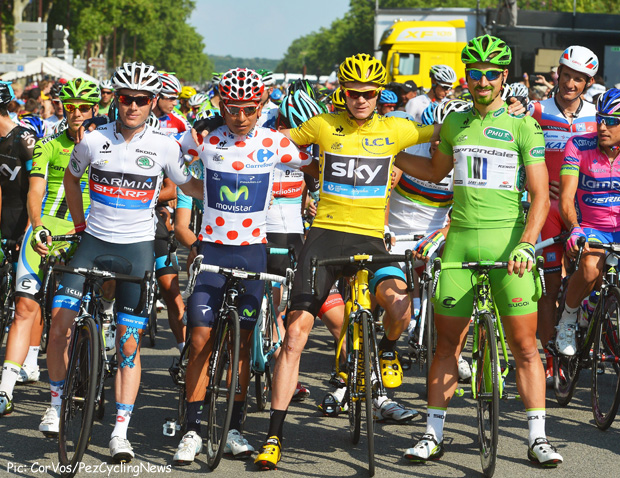 All the jersey holders at the start in Versailles. Andrew Talansky wore white today but he actually finished 2nd best young rider and was just minding the jersey for the winner Nairo Quintana who was in polka dots.

All of the competitions within the race have now been sewn up and only one prize remains: the bunch sprint of the year, should it come to that, will be hotly contested and the man who is looking to further carve his name into history is Mark Cavendish (Sky) who has won here the last four years in a row. This year though has seen the British Champion’s crown slip slightly and he’s not been sprinting up to his usual caliber. Competition will come from the German duo of Marcel Kittel (Argos-Shimano) and the ever-improving Andre Greipel (Lotto-Belisol) and this year’s Green jersey winner Peter Sagan (Cannondale) will cross the finishing line with either his arms or his front wheel in the air.

The race sets off on this 133km last stage of the 100th edition from the famous Palace of Versailles and initially goes away from Paris towards the south-west before turning and heading back via two 4th Category climbs; the first the Côte de Saint-Rémy-lés-Chevreuse at 29.5 kms and the second the Côte de Châteaufort at 33.5kms which passes the Jacques Anquetil monument. As the race runs in to the city center it passes through the courtyard of the Louvre before starting its ten twilight passes of the famous Champs-Élysées circuit but this year with the addition of completely circling the Arc de Triomphe rather than the hairpin turn in front. There’s also a sprint point on the fourth passage of the circuit after some 87 kms of racing.

Well, we say racing but in truth nothing of any great importance will happen until we get close to the finishing circuit as this last stage traditionally sees an end to hostilities, especially as all jersey competitions are now finished. It’s usual to allow the team of the GC winner, as a mark of respect, to lead onto the finishing circuit for the first time before any real action gets under way. Often a breakaway will form and stay away for a while before the teams of the sprinters bring everything back together for the final lunge to the line and everything would indicate that this year will follow that script.

The Roll Out
The last day started out with riders employing the usual high jinks; champagne glasses clinking as the riders rode around the magnificent gardens of Versailles; Joaquim Rodríguez (Katusha) living up to his nickname and smoking a huge ‘purito’, our favorite joker Peter Sagan (Cannondale) having dyed his goatee beard green and Chris Froome (Sky) on a completely yellow Pinarello.

The Race Director dropped the flag to start the day’s racing and for the first time in three weeks nobody attacked! Sky took control of the peloton and due to the estimated late finish the riders were not hanging around and were moving along at a decent pace. The big loser from yesterday, Alberto Contador (Saxo-Tinkoff), was seen talking to Richie Porte (Sky) his former teammate. Contador has promised to go and concentrate on an all-out assault on next year’s Tour so it will be interesting to see how he prepares for that. He’s already stated that he has no intention of defending his Vuelta win so that race could well be the first grand tour victory for Rodríguez as the course suits his punchy style of racing.

Both riders have been instrumental in animating this year’s tour and Contador’s presence at the Spanish race will be missed. Both Contador and Roman Kreuziger (Saxo-Tinkoff) stopped to change bikes but this appeared to be planned as Contador’s race number was already on the new bike. The only difference appeared to be a yellow stripe in honor of Saxo-Tinkoff winning the team award.

The Day’s Climbs
Neither climbs were attacked: the first, the Côte de Saint-Rémy-lés-Chevreause went to Gert Steegmans (OPQS) and the second, the Côte de Châteauort went to JJ Rojas (Movistar). Both riders took one point and the 200€ prize while at the back of the peloton Chris Froome was toasting Technical Race Director Jean-Francois Pescheux who retires this year.

Champs-Élysées
The shadows were lengthening as the peloton moved through the outskirts of Paris and the only moment of note was a protester who tried to get a bit of publicity with a homemade sign but he was quickly hustled away by the Gendarmerie. Passing the Eiffel Tower the Sky team moved to the front in preparation for entry to the finishing circuit. For the second year in a row the Sky team riders brought their yellow-clad team leader onto the finishing circuit followed by all the other surviving riders.

Chris Froome thanked all of his riders and ensured that his most loyal of lieutenants, Richie Porte, was on the front of the train as they came onto the Champs-Élysées just as the Patrouille de France (the French Airforce Aerobatic Squad) flew overhead in tribute. For the first time ever the race passed around the Tomb of the Unknown Soldier at the Arc de Triomphe before heading back down the hill. If you’ve never been to Paris, television pictures don’t really show how steep this gradient is and after three long weeks, ten passes soon take their toll on the riders’ legs.

Racing Commences
After a full lap of honor afforded to Sky the hammer went down and riders tried to create a gap. As the riders came around Norwegian Corner Lars Boom (Belkin) and David Millar (Garmin-Sharp) were trying desperately to get away but the peloton seemed in a hurry to get this tour finished and maybe get to the after-tour parties. Cavendish punctured as they came around the Arc again but his whole team fell back and he was soon safe in the bunch again although he would have used some extra energy to do so.

Eventually a small break formed with David Millar getting away with Juan Antonio Flecha (Vacansoleil-DCM), Cameron Meyer (Orica-GreenEdge) and Julien El Farés (Sojasun). Flecha pushed so hard that only Millar was able to stay with him but BMC was driving in an attempt to bring other riders across. With the sun dipping through the trees the duo had a 25 second lead over the bunch but the teams of the sprinters were keeping them under control. The intermediate sprint went to Flecha as the two breakaway riders hammered on but they were not making any headway while at the back of the race Lieuwe Westra (Vacansoleil-DCM) was forced to abandon due to illness; shame he was only 38 kms from completing the tour.

Five Laps to Go
David Millar was getting frustrated with Flecha missing turns and decided it was all or nothing and took off up the road quickly gaining some time as the main group slowed slightly. Gasparotto (Astana) had been stuck between the break and the bunch but as Flecha came back they were both swallowed up. This left Millar on his own by 22 seconds doing his best to time trial his way to victory.

Three Laps to Go
Millar was still out in front but Jérémy Roy (FDJ.fr) came out of the bunch and was quickly across the gap and straight over the top of Millar. Millar tried to come back but was spent and was soon passed by Valverde (Movistar), Quinziato (BMC) and Bram Tankink (Belkin). This looked like a serious move but Argos-Shimano and OPQS were driving the bunch and so the break only had 19 seconds. The French Champion Arthur Vichot (FDR.fr) punctured at the back and chased hard to get back on only to suffer another flat but he only had 12 kms to go so wasn’t too worried.

The three leaders were trying everything but 16 seconds was the best they could do as the peloton thundered down the hill for the second last time.

Final Lap
As they hit the Champs-Élysées before the bell the break came back together and Geraint Thomas (Sky) led his leader up the hill as the sprinters sorted themselves out behind. Round the Arc for the last time and teams were fighting for position. Contador was driving for Bennati (Saxo-Tinkoff) but OPQS wanted to get this one right and hit the front just before the Place de la Concorde. Cannondale was there, Argos-Shimano was there but Cavendish’s team was letting no one push them off the front.

As they came onto the finishing straight it was all up to the sprinters now and Marcel Kittel (Argos-Shimano) went for it from a long way out as Cavendish tried to come up from Greipel’s wheel. They gave their all but the win went to Kittel with a photo for second and third between Cavendish and Greipel and Sagan taking fourth. 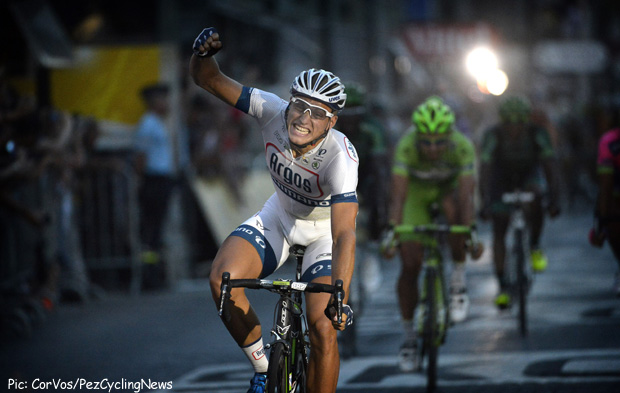 What a magical finish to this year’s 100th Tour as the sun set over Paris. 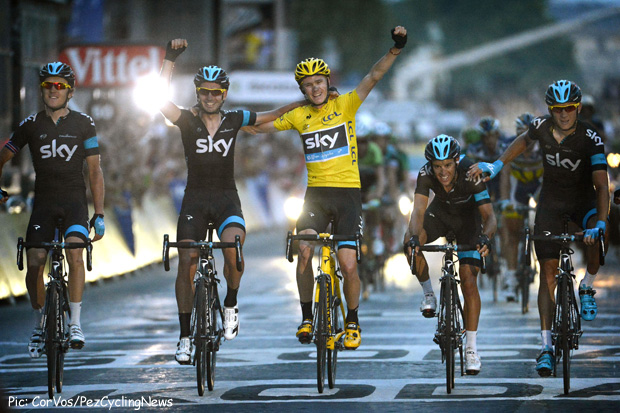 Stay tuned to Pez for Ed’s roadside report, Lee’s Tour Analysis, EuroTrash and more on Monday and look for more on the PEZ Facebook and the PEZ Twitter pages.