Race Report: A race long break kept the excitement high throughout another beautiful Corsican stage. The top fast-men couldn’t make it over the hard climbs of the day and so a battle of the climber/sprinters was on the cards and the little Australian; Simon Gerrans made history giving Orica-GreenEdge its first Tour de France stage win by just half a wheel ahead of Peter Sagan.

The last day in Corsica was quite short, only 145.5 kilometres from Ajaccio to Calvi, but there were four categorised climbs, plus quite a few undulations that would make it a tough day in the saddle. The first climb came straight from the gun; the Col de San Bastiano (Cat 4), the summit is only after 12 kilometres. Next the Col de San Martino (Cat 3) after 58 kilometres, followed by the short and very steep Côte de Porto (Cat 3) at 75 kilometres. Most importantly for the stage win hopefuls is the Col de Marsolino (Cat 2) which crests just 12.5 kilometres from the finish line in Calvi. Between those hills there isn’t much flat road, so not a day for the out and out sprinters.

Here is the Stage 3 Fly Through from globalcyclingnetwork:

The Start from Ajaccio
It was an easy start in bright sun shine with some clouds in the mountains. RadioShack had gone for a subtle yellow band around the shorts with the Yellow jersey for Jan Bakelants, can’t say the same for the Polka Dot KOM shorts, helmet and bike (and probably socks and mitts) to go with the jersey of Pierre Rolland, he should look out for the style police. 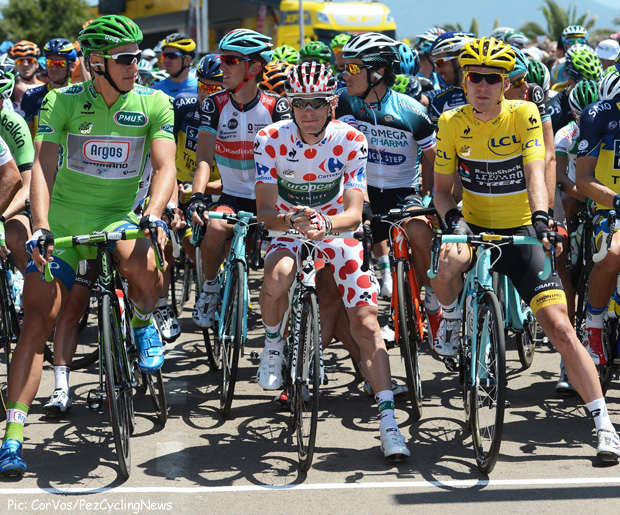 Subtle yellow bands for Bakelants and in your face polka dots for Rolland.

By the top of the Col de San Bastiano (12 kilometres) the escape had 4:23 and Simon Clarke was just in front of Alexis Vuillermoz at the summit as news came through that Astana’s Andrey Kaschechkin was this year’s first abandonment.

At the intermediate sprint (28.5 kilometres) Sebastien Minard was first, although the break didn’t contest the sprint, not the same story in the peloton as Cannondale and Argos-Shimano fought out for the best placing to bring the Green jersey wearing Marcel Kittel (Argos-Shimano) over the line ahead of André Greipel (Lotto Belisol), Peter Sagan (Cannondale) and Mark Cavendish (Omega Pharma – Quick-Step), the lead was now 3:36. 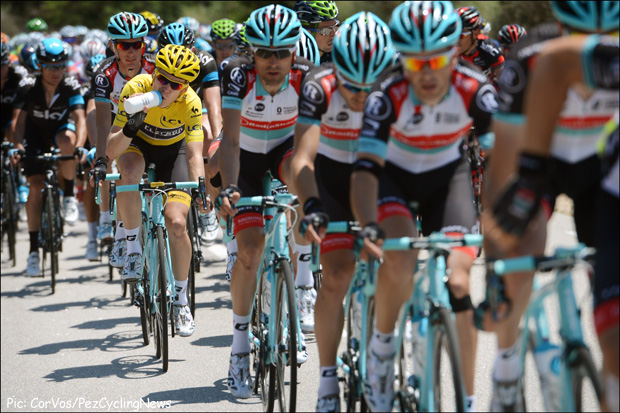 RadioShack Leopard was quite happy to let the escape stay out front, but they were not allowed more than 4 minutes. Up the Col de San Martino (Cat 3) next and at the summit, with 87.5 kilometres to go, Clarke was first again in front of Vuillermoz. Saxo-Tinkoff came to the front of the peloton and the lead was pulled back to under 2 minutes.

Racing down from the Col de San Martino; towards the sharp climb of the Côte de Porto (Cat 3), Sky came forward and along with Saxo-Tinkoff and Belkin the lead tumbled to 38 seconds by the time they hit the base of the Porto climb with 73 kilometres to go.

Simon Clarke again took the KOM points to put him equal with Pierre Rolland, but there was still the final climb before the finish in Calvi. Through the feed in Serriera and the lead had stretched again to over 1 minute. In the bunch there was a little crash with the musettes, the worst affected was OPQS’s Niki Terpstra, but all was OK. 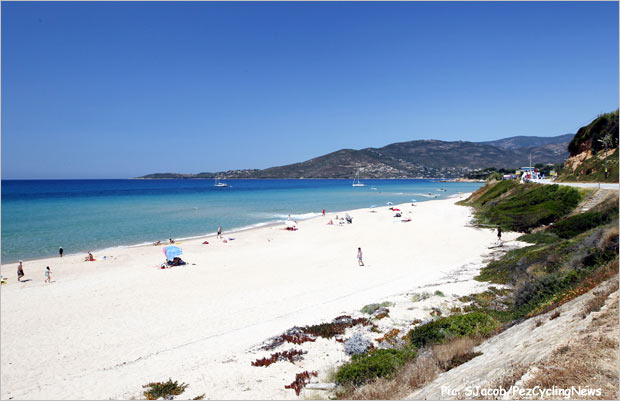 The Sky team then took over marshalling the peloton as they came towards the last 50 kilometres and the tough up and down sections towards the last climb. RadioShack were also keen to keep things together and they put Jens Voigt to the fore, although the speed was not high and the average for the day was under the 40 kph mark.

With the lull in the action the lead went back up to 2 minutes again, but with Cyril Gautier (Europcar) in the lead group at only 1 second behind the Yellow jersey of Jan Bakelants, RadioShack Leopard were not going to give them much fresh air.

The Last Climb of the Day
Nothing much happened on the run-in towards the climb of the Col de Marsolino, except that the lead was pulled back by RadioShack Leopard, and they only had 36 seconds going through the village of La Fango with the Marsolino and 28 kilometres to go.

On the flat section before the climb started properly, the leaders could be seen up the road, Minard put a bit of pressure on the other four, and this didn’t achieve anything. Next to go was Simon Clarke and Minard went with him; Clarke wanted the KOM points to take the jersey at the end of the day. With 20 to go they had 15 seconds on the other three in the breakaway and 50 seconds on the bunch. RadioShack were still on the front, but Saxo-Tinkoff and Sky had moved forward bringing Contador and Froome up handy for any action. Gautier could see that he had to cross to Clarke and Minard on his own. Clarke didn’t want to hang about and dropped Minard with 3 kilometres from the top, trying to get to the KOM line before the bunch gobbled him up, he failed.

The peloton had upped the speed and caught Gautier as Igor Anton (Euskaltel-Euskadi) attacked, but this just animated the peloton even more and they had Clarke in their sights. David Malacarne jumped clear taking KOM leader and Europcar team mate; Pierre Rolland with him and straight up and past the suffering Clarke. Mikel Nieve (Euskaltel-Euskadi) tried to stay with Rolland, but the spotty jersey/shorts were too far ahead and Lars Nordhaug (Belkin) was 3rd.

On the descent Rolland gave it his all, but Sylvain Chavanel (Omega Pharma – Quick-Step) flew out of the peloton to chase down Rolland. As the road flattened, Chavanel caught Rolland with Nieve and Nordhaug closing on them with 10 kilometres to go.

The Final 10K
The leaders had 10 seconds on the Orica-GreenEdge and RadioShack led bunch as they came into the last 5 kilometres, the problem was that the hounds could see the rabbits and would pounce on them any time they wanted and at 3 kilometres to go, they were caught. 2 K’s out and Tom Dumoulin for Argos-Shimano went for a long one, but it was too far out and he was pulled back with 800 meters left.

Cannondale came through to fight it out with Orica-GreenEdge on the front of the lead-outs trains. Both teams battled to bring Peter Sagan and Simon Gerrans perfectly to the front with a good length on the next riders but it was GreenEdge who had the edge launching Gerrans first. Sagan came back up to him and both lunged, throwing their bikes towards the line in a desperate bid for the stage win with only the camera to split them. The lightning fast Australian had the decision by half a wheel from the disappointed Sagan. 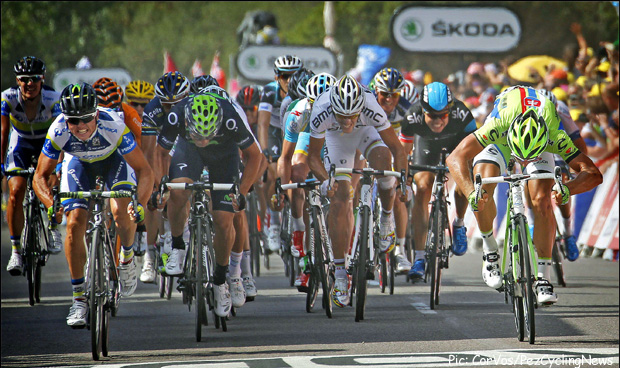 RadioShack Leopard did their job today and kept Jan Bakelants in Yellow for the second day and Sagan took over the Green jersey.

Keep it PEZ for all the Tour action.

Young People Selected to Shape the Future of Cycling