Race Report: With strong crosswinds and loads of street furniture it was another day of crashes. In the end André Greipel made up for the abandonment of his team leader; Jurgen Van den Broeck by taking the stage victory. History was also made as the Yellow jersey was handed to Daryl Impey, South Africa’s first Tour de France leader. It was all go on the roads to Montpellier.

Stage 6 from Aix en Provence to Montpellier was mostly downhill or flat with just one KOM; the Col de la Vayède (Cat 4) after 68 kilometres, 5 kilometres after the intermediate sprint at Maussane les Alpilles. The finish has a slight rise with about 10 kilometres from the line at the end of the 176.5 kilometres.

First news of the day came from Lotto Belisol; Jurgen Van den Broeck will not start stage 6 due to his injuries from the crash in the last 200 metres of stage 5. The team’s manager Marc Sergeant said: “This is of course a drama for our team. Jurgen works towards this main goal and for the second time in three years he has to abandon because of a crash. We often hear before the start if it is possible to come to the Tour with two leaders. Our goal to win stages with André Greipel stays of course intact. Apart from that other guys will get the chance to show themselves. After further tests and depending on the seriousness of the injury we’ll decide about the further sportive programme of Jurgen.”

Maxime Bouet of Ag2r-La Mondiale was also a non-starter due to a broken wrist in the same crash.

The Start
The big problem of the day would be the wind, it was quite strong and there would be crosswinds which will not be good news for the smaller climbers or those not near the front when the echelons start to form. The wind was predicted to blow stronger in the middle of the stage, possibly as strong as 50 kph. The wind would be coming from the North, which was on the riders’ right shoulders as they rode towards the west.

First break of the day came from Luis Angél Maté Mardones (Cofidis); he went up the road as soon as the flag dropped. After 20 kilometres he had a 4 minute lead, the peloton were not very interested in chasing a rider who was 31:26 down and after 35 kilometres he was heading towards a 5 minute lead as Orica-GreenEdge rode on the front with the Yellow jersey of Simon Gerrans tucked in safely.

Omega Pharma – Quick-Step, BMC and Katusha all put men on the front next to Orica-GreenEdge. In the build up to the sprint in Maussane les Alpilles with 113.5 kilometres to go, all the teams had someone up at the front, the keenest being Cannondale, BMC and Omega Pharma – Quick-Step, each had a train going, but it was Lotto Belisol’s André Greipel who was first over the line ahead of Mark Cavendish, Peter Sagan didn’t look to be giving it everything and Alexander Kristoff (Katusha) was third to Sagan’s fourth. Meanwhile at/off the back of the bunch Nacer Bouhanni (FDJ) was in trouble and was amongst the cars on the Cat 4 climb of the Col de la Vayède. Over the top of the climb; Kanstantsin Siutsou of Sky took the 1 point available.

The speed lifted a little on the descent and this possibly put the nail in the coffin for Bouhanni who lost contact completely with the cars and only had the company of a team car, a commissare’s moto and the broom wagon. A can of coke didn’t seem to make any difference and his chance of finishing the stage was quite slim. He has been suffering from a stomach problem and was caught in a crash yesterday. He eventually climbed off when he still had around 100 kilometres to go.

100 K’s To Go
With around 95 kilometres to go and a change in direction, Sky and RadioShack Leopard came to the front and the speed visibly lifted as they entered Beaucaire, just before the feed zone.

The speed didn’t drop as Omega Pharma – Quick-Step rode hard not giving much chance for riders to take musettes, although today riders can take drinks from the cars at any time due to the high temperature. John Gadret (Ag2r-La Mondiale) needed a bike change and the pace dropped as Orica-GreenEdge took control of the situation after RadioShack’s Jan Bakelants pointed out the stupidity of going through the feed at 60 kph.

The Last 50 Kilometres
Nothing had changed on the long road to Montpellier, quite a few riders were dropping back for bottles and to the race doctor for different reasons. Argos-Shimano and Belkin joined Orica-GreenEdge on the front as Europcar brought the KOM leader; Pierre Rolland into the front row just to be safe, there were no mountains!

At 33 kilometres out there was a crash involving Mark Cavendish with obvious marks of road contact on his GB national jersey and no frame number, so there must have been a bike change. BMC and Sky were on the front and the speed was not too high, the OPQS team slowed the bunch further as a couple of team mates dropped back to help him back, at first it was reported that he was over 30 seconds behind. 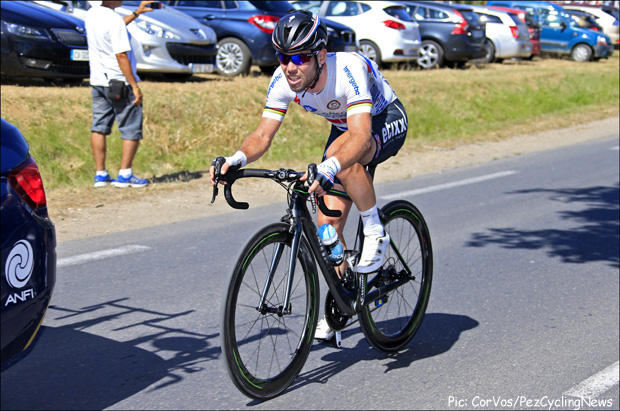 Into the last 20 kilometres and Belkin and Sky were riding on the front through one of many roundabouts on the run in to the finish. The speed was high into a 30 kph head wind.

The OPQS lead-out train had the bunch in a long straight formation as at the back Astana’s Jenez Brajkovic hit the deck and showed no interest in remounting. Eventually he remounted, but with blood on his arm, legs and face.

10K’s to the Line
The peloton had split due to the earlier crash and riders were slipping out of the back of the front pack. Saxo-Tinkoff and BMC were keeping things steady for a short time, but as they passed under the 5 to go banner; OPQS, Lotto Belisol and Argos-Shimano became the leading teams.

Argos-Shimano had the race under control with five riders on the front for Marcel Kittel, 1.3 K’s out and Lotto Belisol hit the front for Greipel with Sagan on his wheel, Cavendish had managed to move forward without team help, but the man from the Isle of Man didn’t have his usual speed. Greg Henderson moved to one side to let the gorilla Greipel hit the front at full speed not allowing anyone pass him for the stage win, Sagan was stuck to the German’s wheel for second and Marcel Kittel got the better of Cavendish for third. 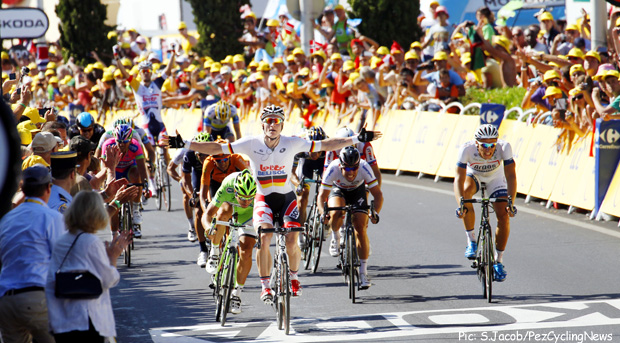 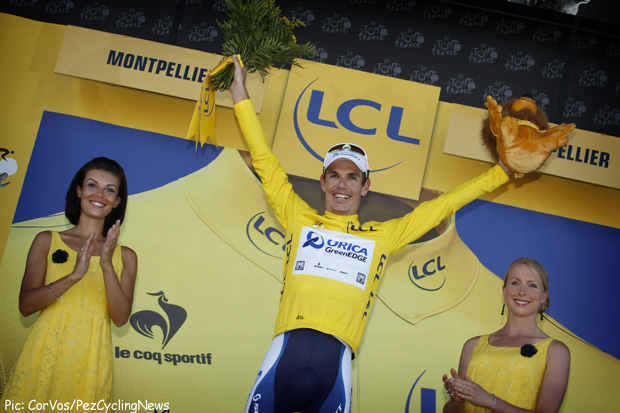 Peter Sagan held on to his point’s jersey, but André Greipel moved above Mark Cavendish and into second place. Michal Kwiatkowski kept the White jersey and Pierre Rolland the KOM.

Keep it tuned to PEZ for all the action and David Lipnowski’s report from down on the French roadside.