Race report: On stage one, many of the big-name sprinters got held up by a massive finish line crash. Today, most of them contested the dash for glory as the whole road behind them became log-jammed with fallen riders. Beautiful scenery, cracking weather, a brave, never-say-die break, sensational sprint … just another fabulous day at the Tour de France!

It’s one of those stages that’s a bit tricky to judge: it rolls, it’s got a couple of climbs which aren’t massive, it’s a sort-of flat sprinters’ day but the wind could get up. A break will go early, but the fastmens’ teams will try and keep any escape within arm’s reach, as the field fries in the Mediterranean heat. We’re going south-west to the cultural melting pot port of Marseilles.

Six are away on an adventure, practically as soon as the flag drops. They are Kevin Reza and Yukiya Arashiro (Europcar); Alexey Lutsenko (Astana), Thomas De Gendt (Vacansoleil DCM), Romain Sicard (Euskaltel) and Anthony Delaplace (Sojasun).

The field is more than happy to let them get on with it, and the lead zooms up, beyond twelve minutes as they crest the first climb of the day, the category-2 Côte de Châteauneuf-Grasse.

De Gendt is a fine attacker, with a Grand Tour stage win and podium at the Giro to his name. Arashiro’s experienced and punchy. Lutsenko’s an ex-under 23 world champion. This is an interesting mix, could go the distance.

With such a lead, the Japanese rider is the maillot jaune virtuel, but the chances of him actually pulling on yellow at the finish are as slim as his shoulder width. Orica-GreenEdge sit on the front of the peloton, tapping out a rhythm. 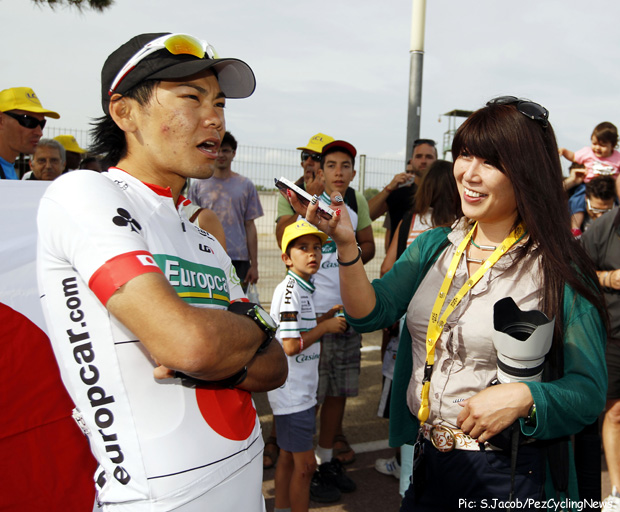 Yukiya Arashiro getting interviewed by his own wife after the stage!

De Gendt took the first mountain point of the day on the Châteauneuf-Grasse, and repeats the trick on the fourth-category Col de l’Ange. The intermediate sprint comes and goes, but in the peloton they fight for the remaining points which Andre Greipel takes ahead of Sagan, Kristoff and Cavendish. Will that be the order on the line today?

Arashiro takes the next mountain point at Côte de la Roquebrussanne but the break is falling apart. De Gendt’s accelerations see off Sicard and Delaplace, so we’re down to four in the lead. The peloton is stirring, and the lead is falling.

The day’s last categorised climb is the Côte des Bastides, and the breakaway’s lead crumbles inside three minutes, but there’s still fight in the legs!

Twenty clicks to race, and the front four have that so-called magic buffer. “They” say that a minute per ten kilometers is the sort of gap that is sustainable for an escape, especially on a stage like this.

Arashiro, in that super-cool Japanese champion’s kit, is over three minutes down so the overall isn’t going to change today. The sprinters’ teams don’t want to shut things down too early.

De Gendt takes the left on a roundabout as that 20km banner looms, injecting a bit of oooooomph into the escape. Still the Dutchman, Lutsenko and the two Europcars driving on.

17.7kms left, and with one-and-three-quarter-minutes in hand, Arashiro jumps. Lutsenko goes with him and Reza calmly slots onto De Gendt’s wheel.

There’s (yet another) big crash in the field, and Pierre Rolland is on the floor, Christian Vande Velde too. Voeckler gets Rolland back to the bunch, but the sprinters’ teams are now thoroughly drilling it. Inside a minute to the breakaway now, and their chances look bleak.

Cannondale now emerge for Sagan; Orica-GreenEdge, Sky, Lotto-Belisol and Omega Pharma-QuickStep are lining it out in the bunch. Tony Martin thundering the gears around, gasping in air.

Col de la Gineste tops out with just over a dozen kilometers to race: Lutsenko attacks and Reza follows. De Gendt and Arashiro are blown.

7.5kms to go and Reza flicks an arm for Lutsenko to come through. It’s brave, and they have 17 seconds, but it’s doomed. Omega Pharma have seven riders in the arrow point of the peloton, with Cavendish right behind them.

Reza is cooked, but Lutsenko is raging against the dying light of the break. He’s not giving up, but he’s only got the width of a road crossing now. He looks over his shoulder and is swallowed as they hit the flat under the four kilometers to go banner. Euskaltel now come through as the speed slackens off.

There’s a big left-hander at two kilometers and Lotto-Belisol fight it out with Omega Pharma for the best line. Lotto ramp it up under the flamme rouge. Here we go. 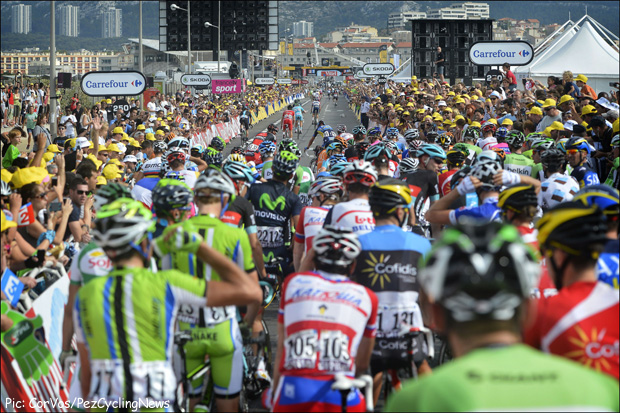 Massive pile up in the finishing straight.The whole field is halted. Ag2r, Lotto-Belisol, Sojasun are on the floor.

Cav is in position, Steegmans leads him out, and the Manx Missile turns on the blasters, roaring clear to take stage win 24. It looked so easy. 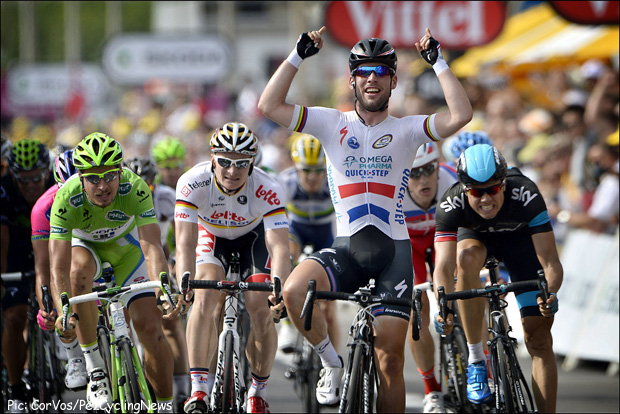 Cav was in top form post-stage as well having a bit of a pop at Orica-GreenEdge – who, “hardly ever do any work”! – and Fabio Sabatini from Cannondale who is mentioned as not being the safest. He also mentioned the last climb of the race, unclassified, but one he remembered from his first year as a pro in the GP Marseilles – a quick mind as well as rapid-fire legs.