After yesterday’s dominance by SKY through the first day in the high mountains the other teams had a simple choice: give in and ride for second place or go on the offensive. With only a third of this Tour completed, it was always going to be the second option. Two teams came out with a plan and while Movistar’s was more obvious it was the tactics of Garmin-Sharp which won the day.

Today’s course was a mighty trek through the Pyrenees with no less than 5 mountain top passes but ending in a long and technical 30km descent to Bagnéres de Bigorre which should have favored the bravest of downhill specialists. The Tour loves history and today’s stage has more than it’s fair share; the first mountain pass of Col de Portet d’Aspet goes past the spot where Fabio Casertelli sadly crashed and died in 1995; the second of the day, the Col de Menté, was the scene of the crash in 1971 which saw the maillot jaune of Luis Ocaña lying on the ground screaming in pain and which led to Merckx refusing to wear the yellow jersey the next day in tribute to Ocaña; and the race passes close to the point where Eugene Christophe famously had to weld his broken forks back together in 1913 but was disqualified because he allowed someone to pump the forge bellows for him.

How it Started
After yesterday’s display of absolute dominance by SKY the other teams would have to try something different if they were to break Chris Froome’s team and it soon became clear that Team Movistar would be the first to take them on. With an uphill start attacks went straight from the gun with riders trying to get up the road. First Johnny Hoogerland (Vancansoleil-DCM) then Tom Danielson (Garmin Sharp) tried to get away but the order of the day was to isolate Froome and Movistar started pushing the pace hard up the Col de Mente.

There were attacks going left right and center, there were small groups everywhere, Peter Kennaugh (SKY) took a tumble off the road, and Froome was having to cover all the bigger rivals. The Peloton split into two groups with Chris Froome soon finding himself alone in the front surrounded by Valverde (Movistar), Contador (Saxo-Tinkoff) and Evans (BMC). The other SKY riders of Richie Porte and Peter Kennaugh were now in the second main group and chasing to try and get back to support their team leader.

Col de Peyresourde
As the race began the climb of the 1st category Peyresourde things began to settle down and we got a clearer picture of how things were playing out in this second and final day in the Pyrenees. We had a five-man group ahead of the yellow jersey group by 45 seconds and it contained Pierre Rolland (Europcar), Ryder Hesjedal (Garmin-Sharp), Romain Bardet (AG2r-La Mondiale), Jan Bakelants (Radioshack-Leopard Trek) and Bart De Clerq (Lotto-Bellisol) with Thomas de Gendt (Vacansoleil-DCM) yo-yoing off the back. The second main group on the road contained Richie Porte and although they had initially clawed some of the deficit back the gap to Froome was now out to 1:15 and going in the wrong direction if you were a SKY fan.

Movistar was keeping the pace high on the climb to ensure that the yellow jersey remained without teammates in the main group while up ahead the leaders had again trailed De Gendt off. As they approached the summit Rolland was sure of the KOM points only to find the suffering De Gendt flash past him and take maximum points. Meanwhile the Porte group eventually crossed the summit somewhere around 2:10 behind his team leader.

Col de Val Louron-Azet
The main group looked like a training ride by the Movistar team as there were so many riders there and Chris Froome was definitely looking very isolated. Simon Clarke (Orica-Greenedge) took off from the Froome group and was quickly up to and past the five leaders and was now out on his own. De Gendt had fallen back to the main group and Hesjedal was being dropped but the main news was that Richie Porte had recovered from his earlier efforts to keep his leader in the lead group and had now taken off from the second group to try and get up to his boss. He was picking up and passing riders and slowly closing the gap. The winner of this year’s Paris-Nice is a man with class and he was showing it now as he pushed on and could begin to see the following cars of the group ahead.

Up ahead Clarke was maintaining his lead with De Clerq, Rolland and Bardet 25 seconds behind the Australian and the group of Froome at 1:20 but Movistar was now ramping things up and riders such as Sylvain Chavanel (OPQS) were popping out the back. This was encouraging for Porte as he was coming up to and passing these riders in his attempt to get back to the head of the action. The Froome group was being dragged up by the massed efforts of Movistar who were now aware that Porte was closing in and this obviously wasn’t part of their plan. Present in the group, and a nice surprise, was Andy Schleck (Radioshack-Leopard Trek) who was showing a return to form. This might be crucial as the rumors say that he’ll be riding for another team next year due to his brother Frank failing to get re-signed.

Ckarke went over the summit in first place with only one more Pyrenean ascent to go on this year’s Tour with the three chasers at 20 seconds but all eyes were on the time gap between Froome’s group and Porte who now had a number of passengers sitting on his wheel. He eventually went over at 2:05 to Froome’s group and while this meant that his chase had slowed somewhat it was still possible he could make up the time on the descents and the last climb. 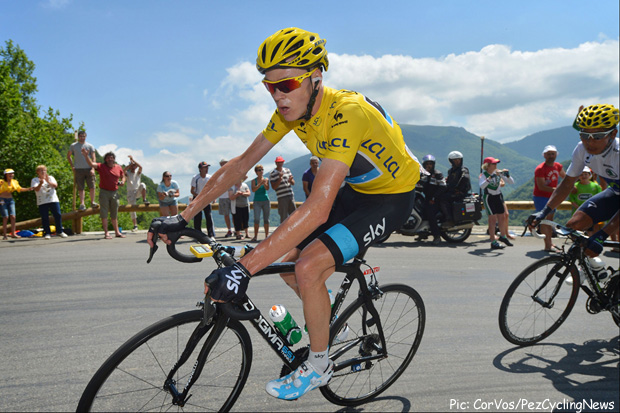 A completely isolated Chris Froome was surrounded by nothing but Movistar and SaxoBank riders all day.

The Final 50 K’s
As the leaders descended Clarke was brought back to the three chasers but behind them the Movistar group was flying in an attempt to keep Porte from getting on. Froome was visibly annoyed at how close the motorbikes were riding in front of the Movistar riders but it was irrelevant as it now looked as if Porte’s great effort had come to nothing. The gap was growing again and it looked as if Froome would have to counter the inevitable attacks that were sure to come on the last climb of the day, the 1st category La Hourquette d’Ancizan. The four leaders started the 9.9kms ascent with only 14 seconds over the yellow jersey group.

And now the action started: Bardet jumped away from the leaders just as they were about to get caught while Bakelants slipped away from the group. But the fast-moving pace of the Movistar team meant that the young Frenchman was soon caught. The GC guys were all paying attention now as Movistar continued the drive and this was shelling more riders out the back; Mick Rogers (Saxo-Tinkoff) who had paced Contador earlier on was now paying for his efforts and slipped to the back of the group. Would Movistar launch an attack or were they content to let Valverde sprint out the stage and move into second place overall?

The first to go was Quintana (Movistar) but as soon as he saw Froome and Contador covering him he backed off. Next, and maybe not part of the script, was Dan Martin (Garmin-Sharp) who drew Jakob Fuglsang (Astana) with him. Bang! Quintana went again. And again Froome came back to him. A minute later and Quintana tries again and again Froome covers him but these attacks must have hurt him. And maybe not just him as Saxo-Tinkoff now moved to the front to control the pace with Andy Schleck still well placed.

But it was the little Colombian Quintana who went again; the Yellow Jersey was very attentive and covered again. The attacks had whittled the group down to 15 riders with the two leaders now ahead by 45 seconds. As they approached the summit it was the Garmin-Sharp rider who first parted the sea of Spanish and Basque flags and went over first. The group was at 45 seconds with Wout Poels (Vacansoleil-DCM) coming over in third.

10 K’s To The Finish
The two escapees scorched down the valley towards Bagnéres De Bigorre hoping to survive to the finish but Robert Gesink (Belkin) was driving the break in an attempt to get over the line first. Eventually, with no-one helping, the gap started to go out again and it looked, with 4 kms to go, that it would be between the Irishman and the Dane for the win. 2 kms to go and Fuglsang unloaded his pockets of any unnecessary weight as they prepared for the sprint. The Irishman was in the perfect position on the Astana rider’s wheel and waited until 350 meters to go before he attacked. As they came around the final left-hander Martin looked back and it was clear that Fuglsang didn’t have it but Stephen Roche’s nephew kept driving all the way to the line and took the well-deserved win. The yellow jersey group finished 20 seconds later led home by Kwiatkowski (OPQS) but the big loser of the day was Richie Porte who was now some 15 minutes behind. Movistar’s plan for the stage may not have worked out but they now hold 2nd, 7th and 10th place overall. The day belonged to the Irish though as Dan Martin not only won the stage but he also moved up to 8th place on GC. 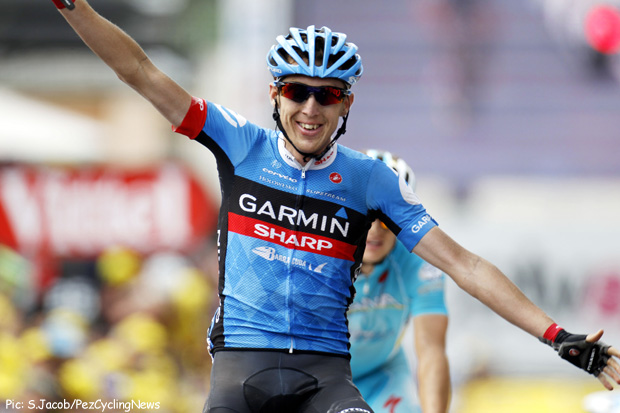 Now the race relocates to the north-west with the first rest day tomorrow followed by a couple of days designed for the sprinters and the sight of the individual time trial to Mont Saint Michel. This Tour is far, far from over.

Keep it Pez for all the action!

Lotto Belisol: Lars Bak extends contract until the end of 2014