– By Akira Wong For TDL –
A freak accident to Saturn’s Nathan O’Neill within the last 2km of stage 7 from Kuantan to Bentong today saw a change in the overall lead of the Telekom Malaysia Le Tour de Langkawi for the first time this year. Although the Australian lost the lead after seven stages in the fight for the overall win, team Saturn however is still in a commanding position with Tom Danielson stepping in to take top spot in the General Classification (GC). 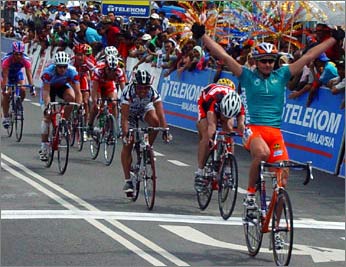 The American outfit also has Eric Wohlberg on second in the GC and seems poised to win their first ever overall and individual titles. While O’Neill did not mince his words when he complained about the standard of some riders in the peloton (whom he blamed for the crash), Danielson however was more diplomatic. “I’m just sad that Nathan had to go down like that and really this is not the way to take the yellow jersey,” said the 24-year-old Danielson.

“I’m actually looking forward to the climb at stage 9 (the climb up Genting Highlands) and doing well there as I’ve been preparing for that since last year.” The long and undulating 196km ride today saw none of the bravado of the early stages where the break happened only at the second sprint in Temerloh through Lars Ytting Bak of team Fakta, Johan Dekkers of Marlux, Erwin Thijs of Palmans Collstrop and Scott Guyton of Flanders-Iteamnova.

But with only a lead of 3 minutes with still 15km to go to the end, that soon came to an end when the peloton came bearing their way down into Bentong town. And following the pandemonium that resulted from the crash, it allowed the boys from Ceramiche Panaria to better execute their plan for Graeme Brown for the sprint finish to prevent a late surge from anyone else. “Both Sergiy Matveyev and Brett (Lancaster) did a great job to lead me out,” said Brown, who finished ahead of yesterday’s winner Stuart O’Grady of Credit Agricole.

“I waited for the right time to go and with no one making their move, I just pressed on ahead.”
Although O’Neill might have lost his shirt and practically a few other things after the crash today, there was however no changes to Brown’s position in the sprinter’s green jersey or that of Roland Green in the red polka dot king of the mountain classification.

In the fight for the best Asian rider in the meantime, Hossain Askari of the Iranian national team can heave a sort of relief where the 1-second advantage that he holds over Tonton Susanto of team Telekom Malaysia since the start of the Tour has now stretched to 11 seconds. The Indonesian got caught at the back of the peloton and came in 56th on the stage – 10 seconds behind the main group.

“It is the climb up Genting which I’m more concerned about,” added Askari afterwards.

Following today’s excitement at the finish, the stage is set for tomorrow’s short but testing 112.5km ride from Kuala Lumpur to Seremban. Apart from the usual 3 sprint stages along the way, there will also be the class 3 climb at Hulu Langat and two class 2 climbs at Bukit Hulu Beruang and Jeram Toi.