The Tour Down Under stayed hot as today’s stage finished in a bunch sprint won by Lotto-Domo’s Robbie McEwen, but was by no means uneventful. A breakaway of 13 formed containing the likes of Jaan Kirsipuu, Ciaran Power and Nick Gates. They were briefly joined by a horse…

Today I was lucky enough to see the days racing unfold from the front seat of the Navigators team car, a full report on that experience will follow shortly. 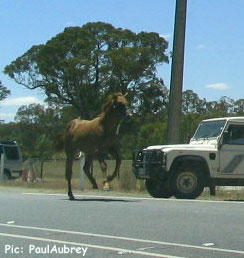 With 40km remaining the attacks started to fly in the breakaway, the group was split in three. Kirsipuu was in the leading group and their lead exceeded 3 minutes over the peleton. It was at this point that the breakaway started to threaten riders high in the GC. Lotto-Domo, Navigators and Bankgiroloterij were ordered to the front to limit the deficit. As the leading groups advantage started to drop, Kirsipuu launched a solo bid for the stage win with 11km remaining. 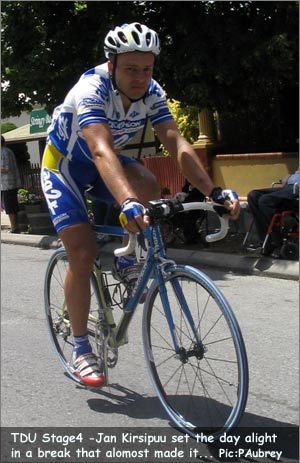 The finish was always going to be close, Kirsipuu was caught with under a kilometre remaining. McEwen took the stage ahead of Aurelien Clerc and Baden Cooke. Kirsipuu’s efforts were not in vain, he earned the Century 21 Most Aggressive rider jersey for tomorrows stage.

In an interview with Robbie after the stage he said “he hoped for an easy day in the bunch today to conserve energy for tomorrow, getting the stage win was just a bonus”. Robbie conceded he is not within striking distance of Patrick.

Rider Comments: Baden Cooke
Pez: You seem to have a following of teenaged girls, how do you find this?
BC: (Laughs) I didn’t notice.

Pez: Did you enjoy your time at the fiesta last night? (I didn’t tell him a saw him with a beer in his hand.)
BC: I actually came down here by accident, I was looking for a corner store and the taxi brought me down here.

Pez: How will Fdjeux.com be approaching the GC with 2 guys in the top 10?
BC: We have 2 options Phillippe Gilbert and myself, we will attack, be aggressive and see if we can pull it off.

After I finished speaking with Baden, some of his fan club showed up. Baden replied with a laugh “Now I know what you mean!” 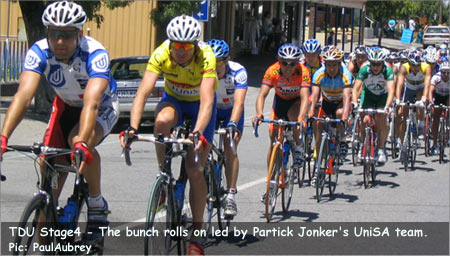 Rider Comments: Julian Dean
Pez: Are enjoying your time over here in Australia?
JD: Yeah I always enjoy coming here (like all Kiwi’s), it’s a good fun event that is really well organized.

Pez: How are you finding it on your new team Credit Agricole?
JD: It’s a good atmosphere with a great group of guys and the organization is perfect. So everything is there for me to do really well this year.

Pez: Have you featured in any of the finishes yet?
JD: No there haven’t been any sprint finishes yet! I will see how it goes, I am not really feeling super but if I am feeling ok one day I will have a crack at it. I’m just waiting for the moment.

Get more info on the Jacobs Creek Tour Down Under: www.TourDownUnder.com.au

Meet US Postal At Bicycle Ranch