Roadside Report: Sunshine, spectacular scenery, thousands of enthusiastic spectators and the crowd favorite taking the win. Yep, It was a good day to be an Aussie roadside at the 2014 Tour Down Under. Our Aussie on the scene, Steve takes us through his day and the excitement of the first stage of the first WorldTour race of 2014.

If the People’s Choice Classic was the entree, today’s first Stage of the Santos Tour Down Under was the start of the main course – and what a meal it was! After a terrible week of blistering temperatures and bushfires, confirmation that today’s stage in the Barossa Valley was going ahead could only be announced yesterday afternoon and spectators and riders alike were thankful as the Barossa Valley is a very special place. 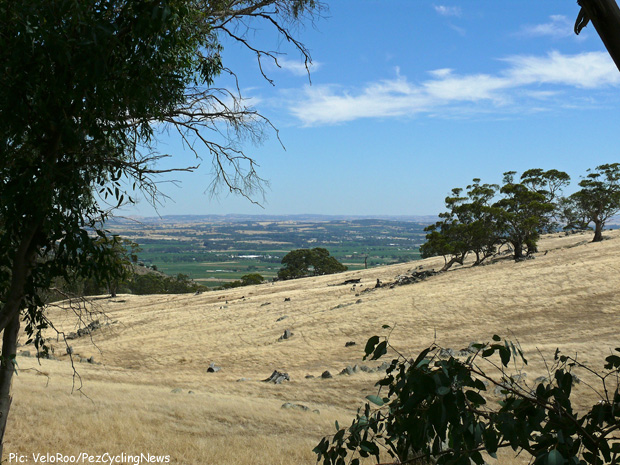 The Barossa valley is located 70 kilometers north of Adelaide and is famous for its wine and cheese, superb scenery and is generally just a perfect location to kick off the season. Although a few hardy souls ride the 70kms from Adelaide to Barossa up and back to watch the stage, most, like us drive, packing the road north out of Adelaide and the freeway with cars loaded with bikes and riders. 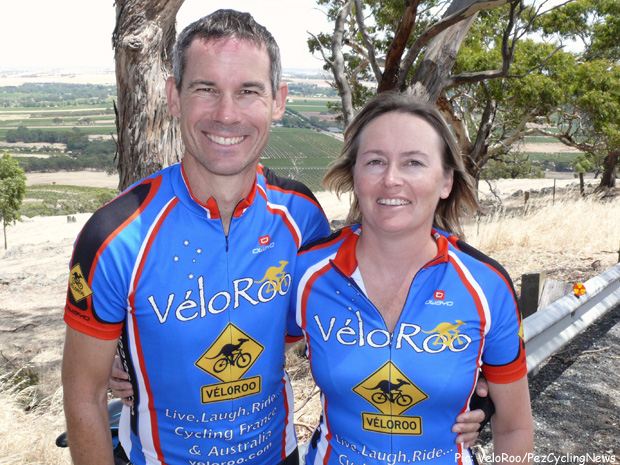 The influx of cyclists eager to be a part of the atmosphere at the TDU exploded during the rest day and by 7:30am the PEZ local coffee shop was buzzing with a hundred new faces and bikes seeking their caffeine hit after their first 2014 TDU morning rides.

There are 8 townships on the route today and by 9am their cafes and bakeries are already packed with cyclists, most knowing to get up to the best vantage spots early. The route is repeated 3 times which offers many viewing locations as it is possible to watch the peloton pass then move on along the stage and repeat. The sting is the last loop, where the riders have to take a right hand turn up Mengler’s Hill, a 3 kilometer 7% average climb, that will be ridden in the full mid afternoon sun. After the KOM summit they plummet into Angaston for the finish and after 130 k’s in the scorching Aussie sun that descent can’t come soon enough. 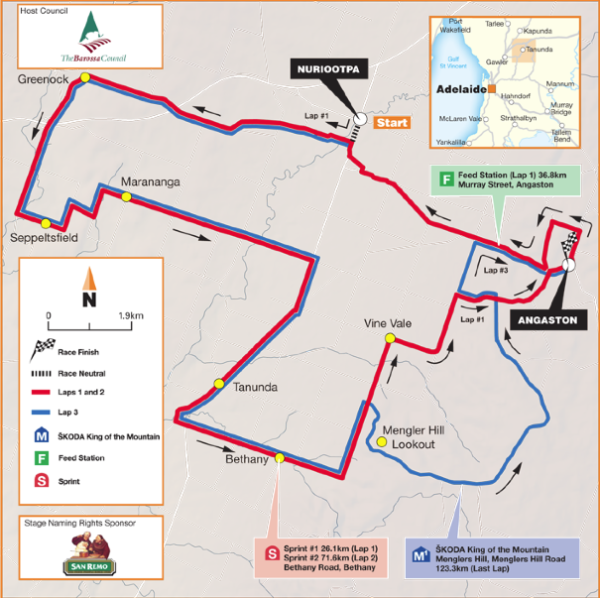 We left the car in the Barossa town of Tanunda and took to the bikes with the sun already warm, and unfortunately a solid headwind for company too. We stocked up at one of the bakeries and rode on the route to the first sprint point. All along the course families set up for the day’s racing and we spotted a group who had set up a sculpture of a cyclist, complete with Ochre jersey – and for some strange reason they were dressed in a cow outfit. These guys are planning a huge day of TDU fun, despite not being lycra cyclists, they all look forward to this time of year just the same. 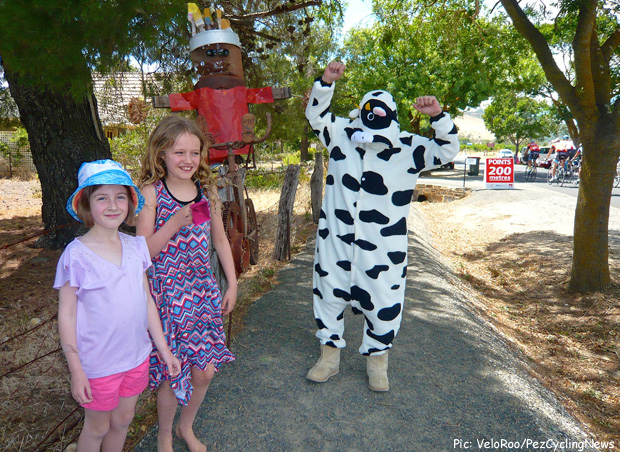 A few minutes later, the day’s breakaway of just two riders fight for the sprint points and in a virtual photo finish it was Drapac’s Will Clarke who took it from Uni SA’s Neil van der Ploeg. 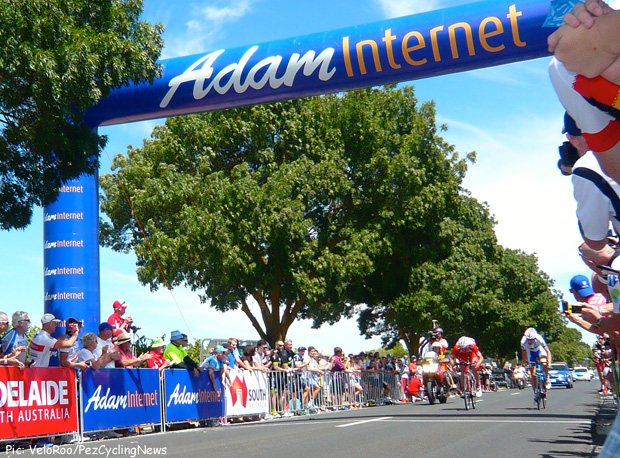 We then move onto the famous Mengler’s Hill and to entertain ourselves we do a couple of climbs to the top, the second one seeking out the best vantage point to see the peloton pass through the valley below on their second circuit. Like all hill climbs this is the place to watch the guys at work and it soon becomes pretty packed. 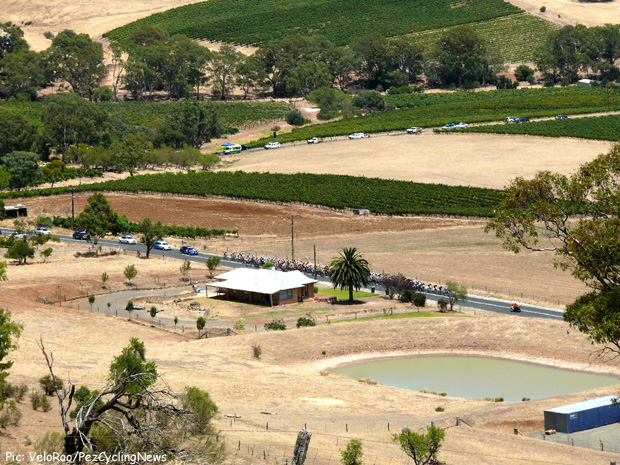 After the 2nd pass under the sprint point there is a 50-60 minute window for the punters to get as far up the Mengler’s climb before the road is closed. The double bonus of getting onto the climb early is the entertainment of watching and cheering those now racing to climb up as far as possible before the police stop them. People on all sorts of bikes are encouraged by the growing crowd, but extra kudo’s is given to the father who is doing Menglers with his baby strapped to the kiddie seat on his bike. Popping mono’s gets him even bigger cheers. 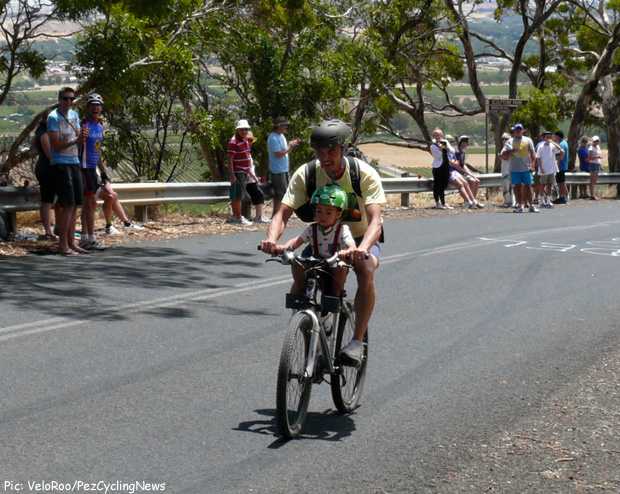 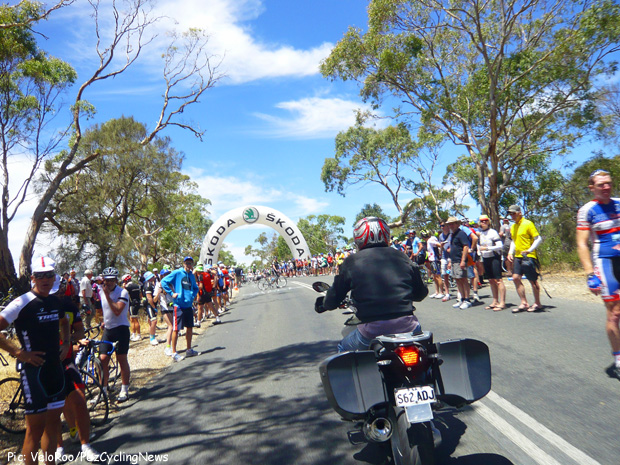 The loudest and most enthusiastic spectators are a group of 3 who do not tire with their support for everyone on the climb. We discover that they are a couple from Queensland who have befriended a Canadian girl they met at the Team Presentation. The Canadian girl has spent two years following the World Tour with the most surprising place she watched a race being in Jordan where apparently they really know how to celebrate. After two years following the races her cheering was very impressive and energy contagious. 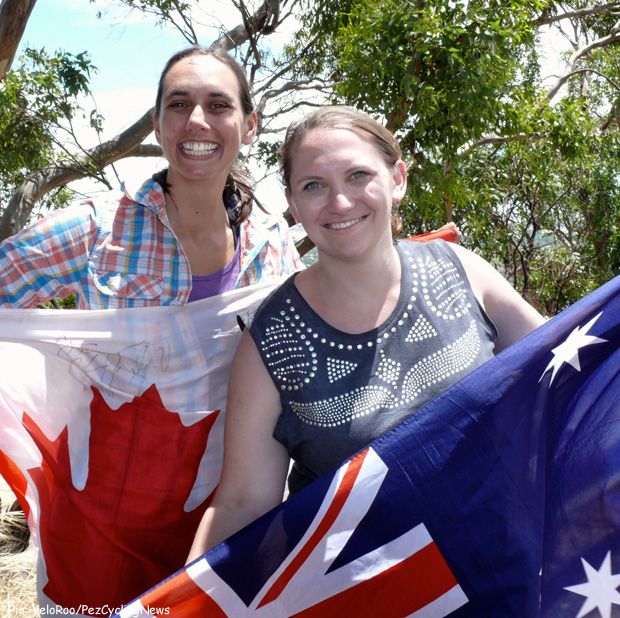 With it being stinking hot now, we see the breakaway being caught by a solid peloton about a kilometer before the right hand turn signalling the base of the climb and in the 2 kilometers that we are up the climb the peloton had really stretched apart. 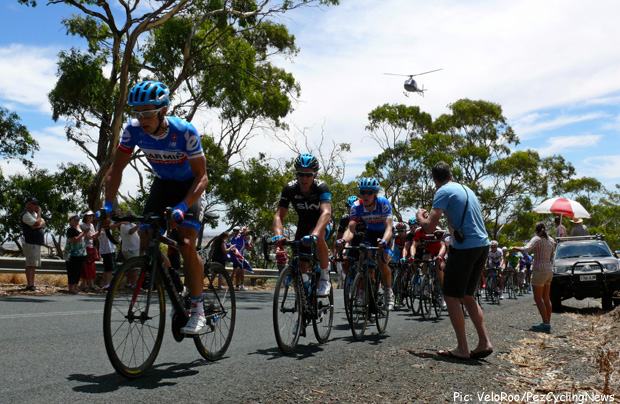 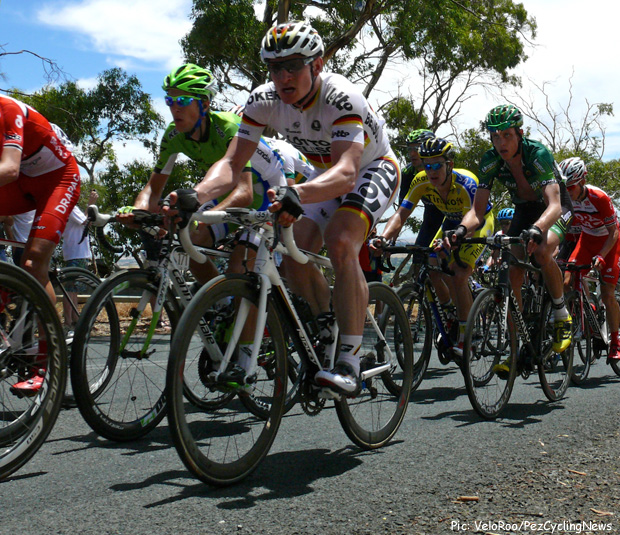 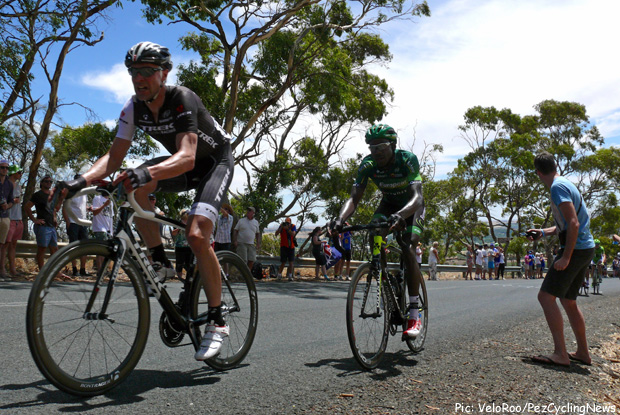 as did his countryman Jens Voigt – but only just, being one of the last riders to make it.

As the guys come into view we all go crazy cheering them on. This is what it is all about – massive fun and hysteria! Once the green car has passed we board our bikes to follow the peloton up the climb, while we didn’t get the same reception as the pro’s it was awesome fun and the roll into Angaston, was damn quick. 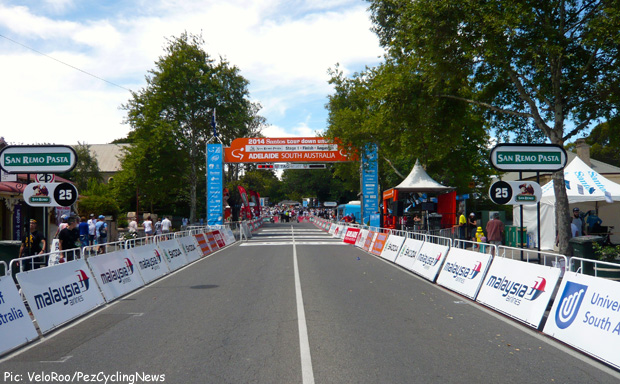 The finishline view that Steve and Julia got when they rode back down the hill. This is almost the exact point where Simon Gerrans made his move to take a surprising sprint win over André Greipel.

On arriving in town we learn that Simon Gerrans is continuing has new year form winning the stage from André Griepel whose legs must have been fatigued somewhat by the slopes of Mengler’s Hill. The Australian Champion winning the first stage in Australia’s only WorldTour race and taking the leader’s jersey with it – celebrations will be huge tonight I’d say and the street party in the Adelaide suburb of Prospect signalling the start point for tomorrow’s stage has to be attended!