Roadside Report St.2: Today was the first overcast day of the 2014 Tour Down Under but the sun was shining bright for Lampre-Merida’s star Diego Ulissi. PEZ was amongst it all again roadside at the startline and again at the finish in the Euro-Style township of Stirling to catch all the action.

Stage 2 of the Santos Tour Down Under saw the field make its first city centre depart today from the northern suburb of Prospect. After departing, things get vertical pretty quickly as the route winds through the Adelaide Hills before culminating with 3 repeats of a 20 kilometer loop around the very pretty village of Stirling. With its alfresco dining, gardens and cafe-culture feel Stirling has a very European style to it and in the end it would be a European pro who would take the win there.

Before all that though there was the start to attend to and Adelaide’s streets were filled solid with cyclists migrating to Prospect 5 kilometers north of the city, for the grand depart. The city depart gave us the opportunity to easily attend, and we were amazed by the number of spectators lining the sides of the road – given it is a normal work day and all. 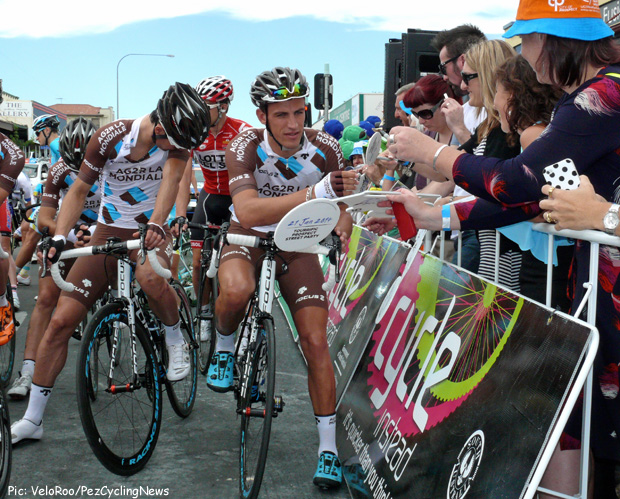 The fans have great access to the pro’s who were happy to give their autographs and photos, however, it seemed that the pace of the racing to date is surprising the most experienced riders with most involved in serious discussions amongst the team buses. The TDU has significantly changed since its beginnings when it was oftened viewed as a ‘training race’ and is now, today a no holds barred pedal to the metal slugfest as riders come here in form and looking to grab valuable WorldTour points. 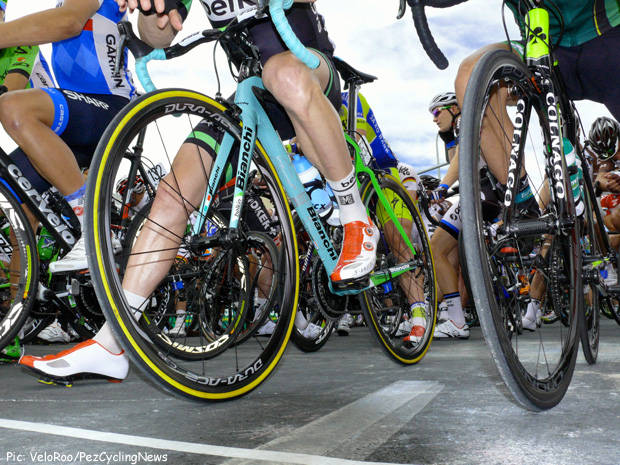 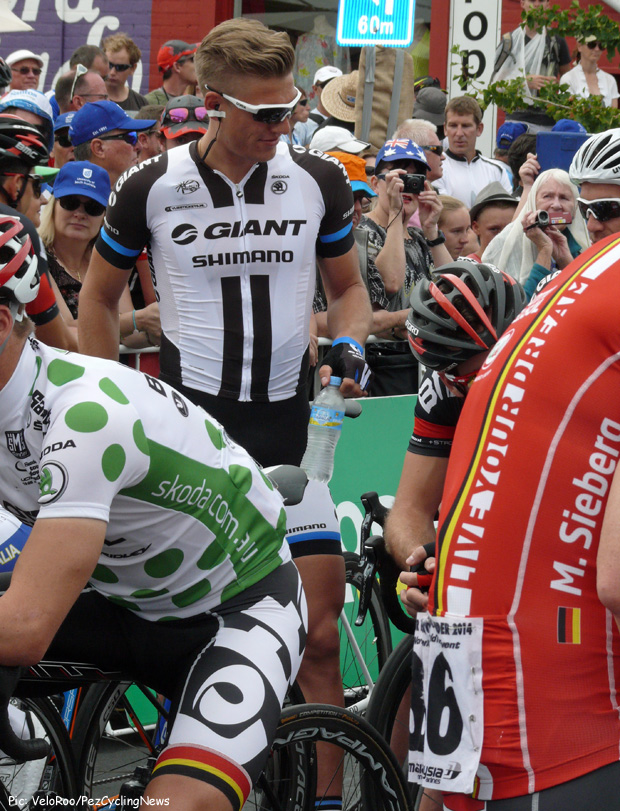 Marcel Kittel was looking cool and calm before the stage started but that would all change 150km later in Stirling. 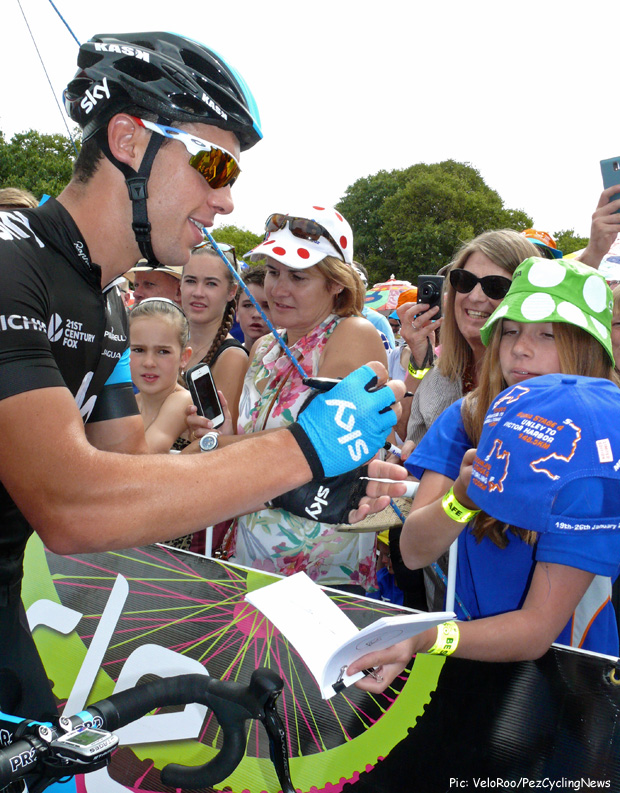 Richie Porte was very popular with the locals. 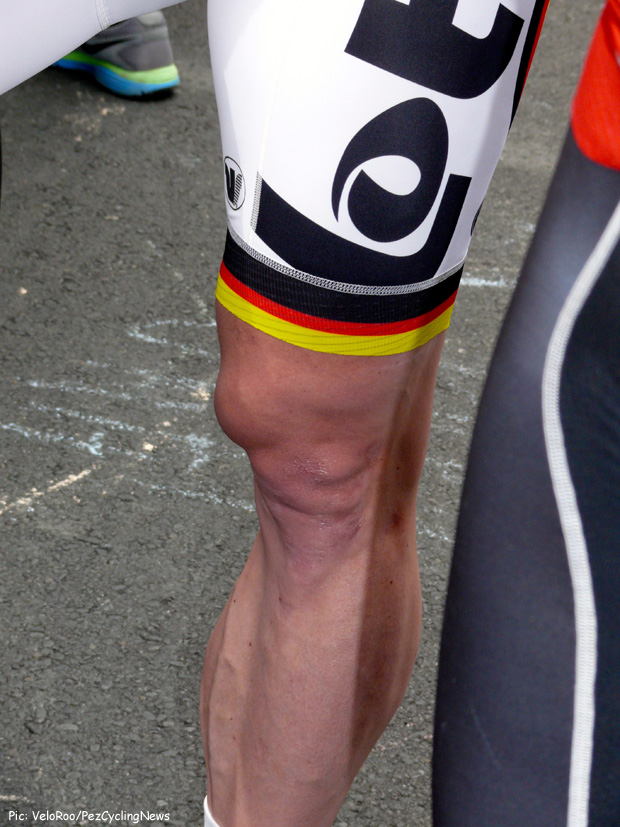 Despite getting a nice closeup of André Greipel’s amazing calf on Sunday I was still magically drawn to his ridiculously muscly legs again today…. 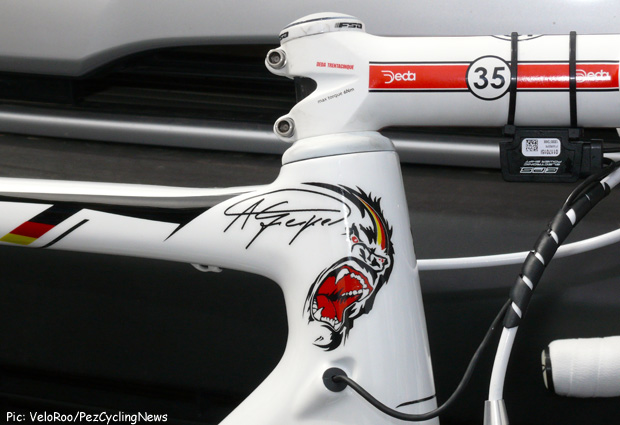 although I did manage to draw myself away long enough to snap a shot of his cool custom painted Ridley. 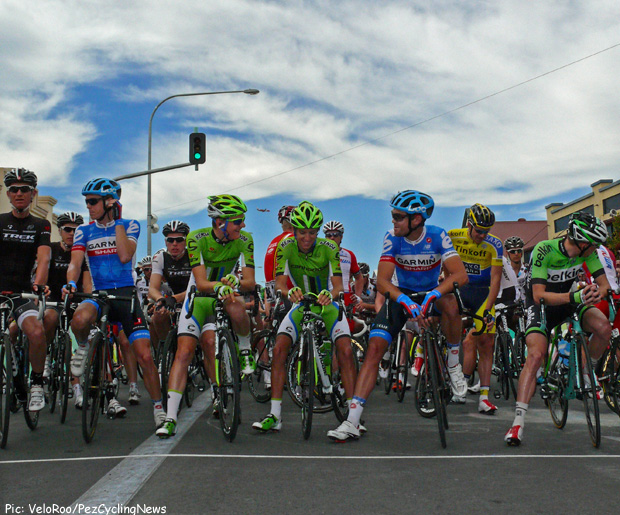 Time for me to move – the guns about to go!

The starters gun signals the start of two races, the pros heading off into the hills and the spectators racing back, through the city and tackling the 9 km long climb to Stirling. It is difficult to judge which one is the most competitive! Before we leave Prospect, we were given a typically Aussie version of a road safety message, leaving no doubt about the message. 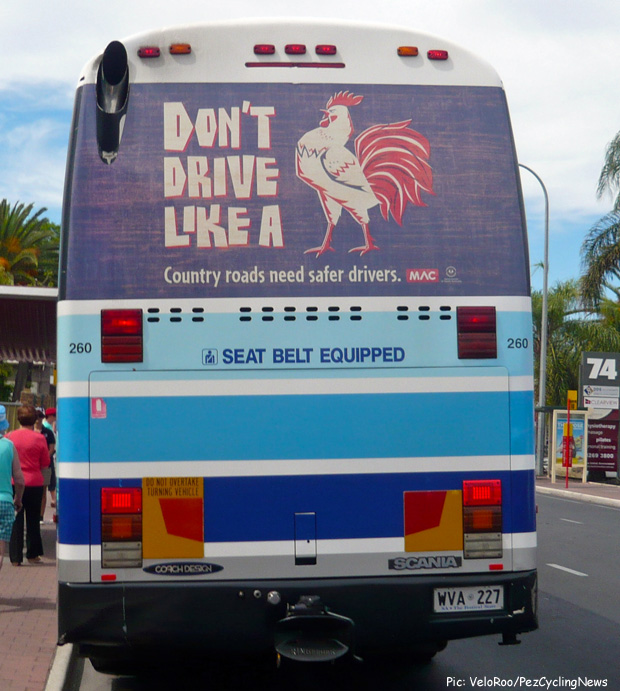 Clearing the city there were about 15 of us riding the steady climb along Glen Osmond Road but by the time we got to the base of Mt Osmond the number had blown out to 50. We continued to pick off riders as we worked our way up the climb, averaging 4.6% for the 9 kilometers, and peaking at 8.8%. Towards the top the path takes up one lane of the old freeway, and over your shoulder there are views across Adelaide out to the ocean. 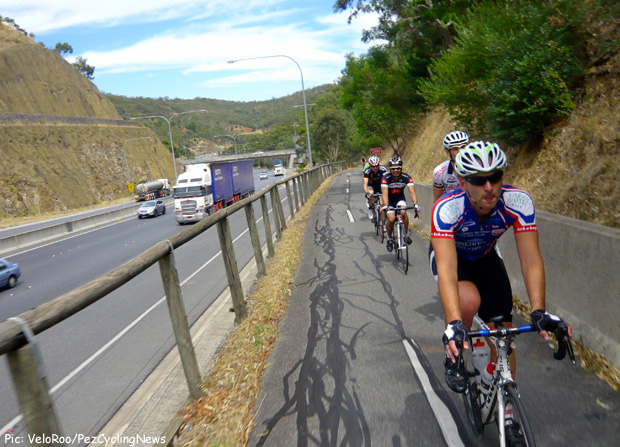 The clouds had cleared and the gum trees were thankfully providing some shade from the bright sun. The local riders tell us that the Mt Osmond climb is extremely popular and is full of riders on the weekend, which having ridden is not hard to see why. 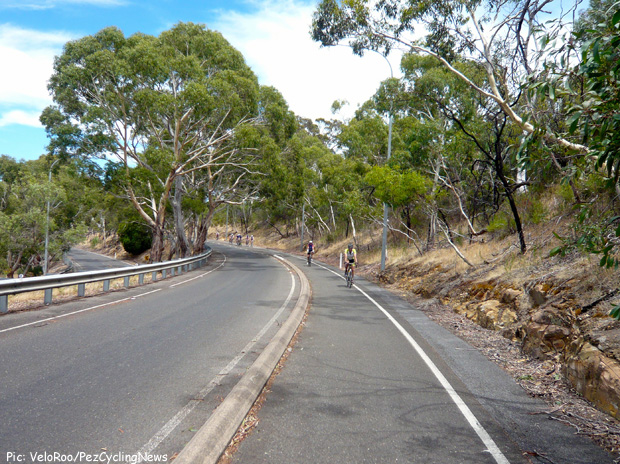 At the top though is something that is not here every weekend – the Rapha Citroen H Van Coffee Wagon, giving out free freshly ground coffees, winning! It would be rude not to reward all the hard work.. 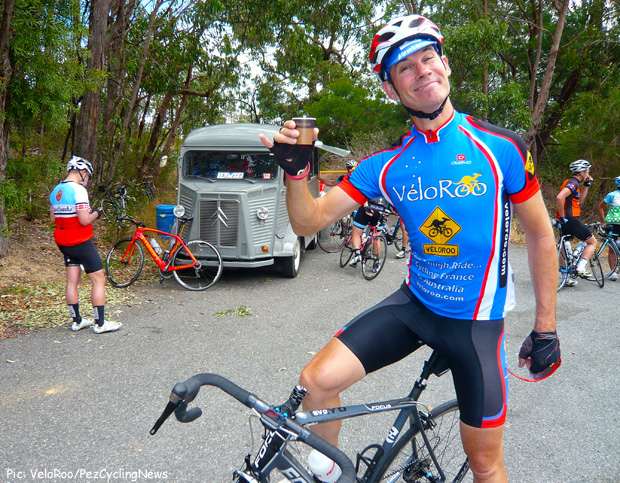 We roll into Stirling, which is packed with cyclists. The township really gets behind the Santos Tour Down Under, and it is clearly a favorite amongst the local and visitor cyclists alike. 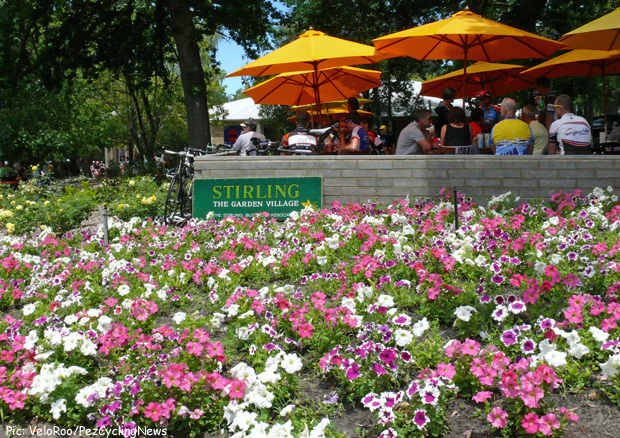 Stirling sees 3 passes through its pretty streets filled with summer flowers, including the uphill finish. The festival atmosphere, narrow roads and punchy undulations create a cauldron of excitment with outside areas and cafe’s packed with cyclists. Every spare fence or wall has a number of bikes leaning against them, while the footy ground in the centre of town is converted into a mini village housing sponsor displays as well as the team vehicles. 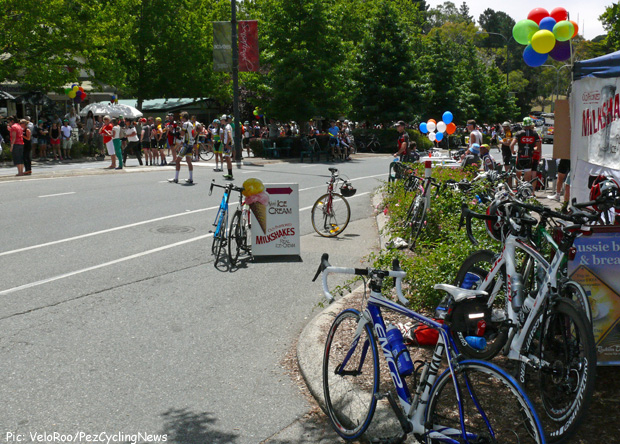 Last year Tom-Jelte Slager took his inaugural Pro Tour win on this stage before going on to win the overall GC and this year it was another first timer with Lampre-Merida’s Diego Ulissi upsetting two Aussie favorites Simon Gerrans and Cadel Evans to take the win. Ulissi has now moved up to second overall just seven seconds down on ‘Gerro’ and he could be a real contender for the title with his climbing and sprinting abilities.

After the race had wound down we got to check out the recovery area where it was clear some of the riders were struggling with the heat and the pace. 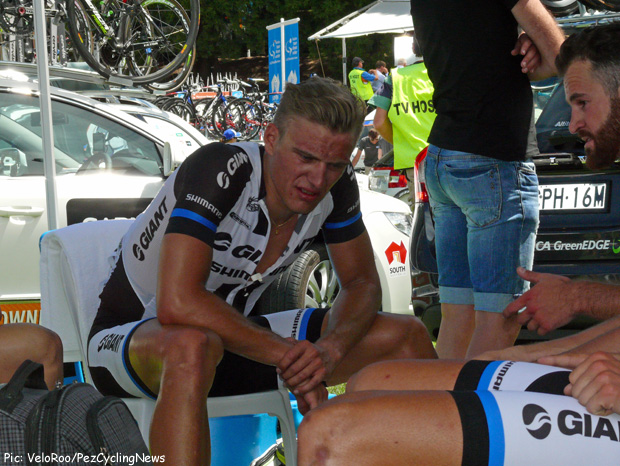 One of the unique things about this stage – and many in fact at the TDU is that once the riders have finished the race, they simply fill up their bidons again, grab some food and ride back to the hotel in the centre of Adelaide – which is their same hotel for the entire race. This means that the the majority of spectators also do the same giving the everyday Joe a unique opportunity to ride alongside their heros after just watching them racing. 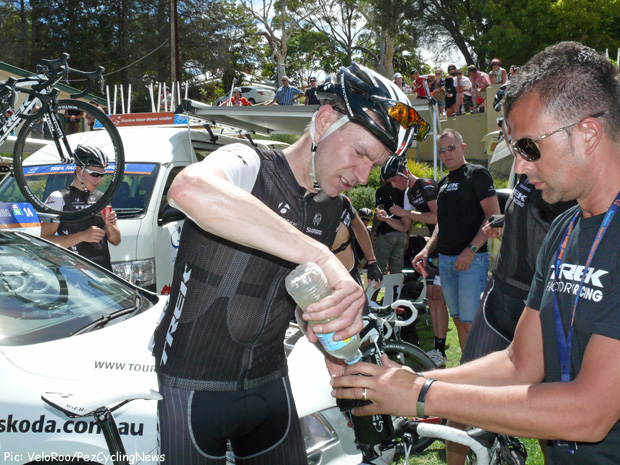 A quick refill for Jens Voigt and he’s away again.

From Stirling to Adelaide is just 25 kilometers and while we normally mingle in with the pros too, today we decided to take a different route. 6 of us rode against the traffic flow, rolling along top of the hills to Blackwood to discover some simply outstanding roads, full of flowing cambered corners, short straights and smooth tarmac. What a brilliant way to finish a perfect day of Tour Down Under cycling. Bring on tomorrow!