Roadside Report: The 2014 Santos Tour Down Under cranked up the excitement again today as Cadel Evans exploded the race with an impressive attack on the infamous Corkscrew Road climb to take the stage win and the GC lead. PEZ-Man Steve was there roadside to take it all in.

Today’s temperature was once again expected to be well in excess of 30 degrees and despite the stage kicking off in the gorgeous boutique and café thick suburb of Norwood we instead decided to skip the startline antics to save our energy for the climbing later in the day. 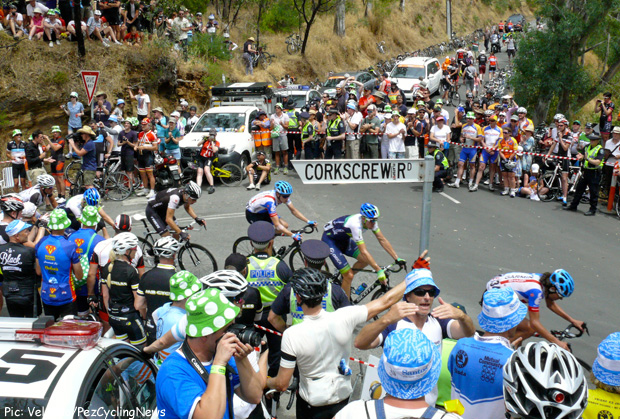 With our decision to skip the stage start confirmed we instead headed off to the top of the first climb, where a circuit through 3 townships is repeated. A second viewing was then possible before heading to the infamous Corkscrew Road, via the spectacular Gorge Road. The Stage 3 layout means it’s possible to see 3 different passes of the peloton in one day. Kudos TDU organisers, Kudos. 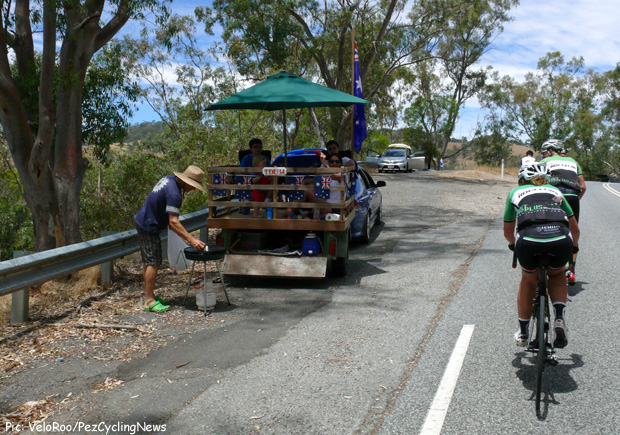 These guys sure had their TDU viewing ideas worked out well.

To get to the hill some major arterial roads had to be travelled on the bikes but it was fantastic to be among the thousands of other riders with the same destination who took over these major roads for the morning. Already people were lining the street with their banners, flags and loud TDU sponsor merchandise.

We got to the top of Houghton Hill and like everyone else who made the climb we were pretty overheated already – I can only imagine what the WorldTour guys must be feeling as they tackle these same roads at their ridiculous speeds.

Before we knew it the first group came into view and it was a small breakaway with Travis Meyer (Drapac), Jens Voigt (Trek), Jérôme Cousin (Europcar) and Andriy Grivko (Astana) first, then the main bunch shortly after. The crowd cheered them all on, knowing that they still had 135 kilometers to go under the hot Aussie sun. 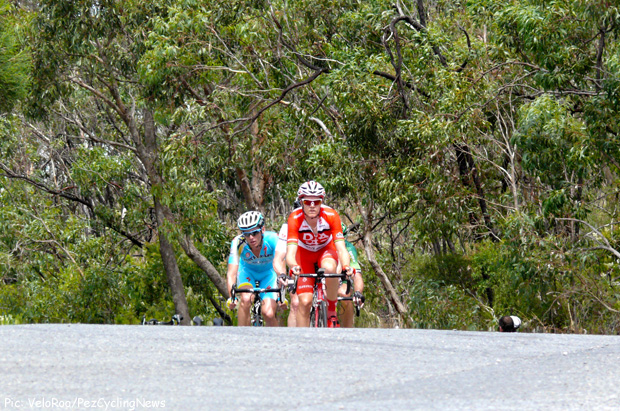 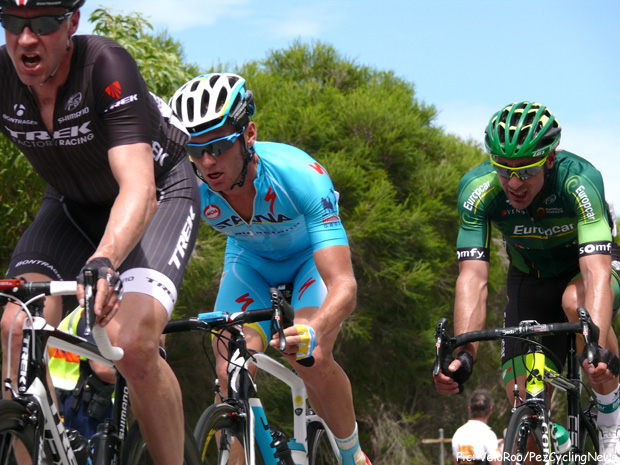 In the break and working hard as per usual was Jens Voigt who would earn the most aggressive rider award for his ride. 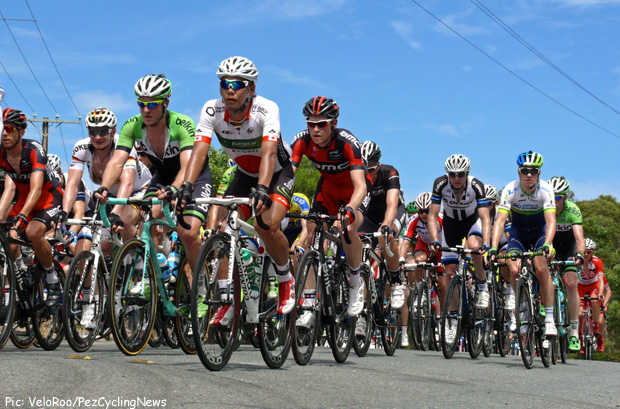 After the peloton had gone through we headed to Inglewood to watch the second pass as the pros headed up the Chain of Ponds road, zig zagging its way alongside the gorge. 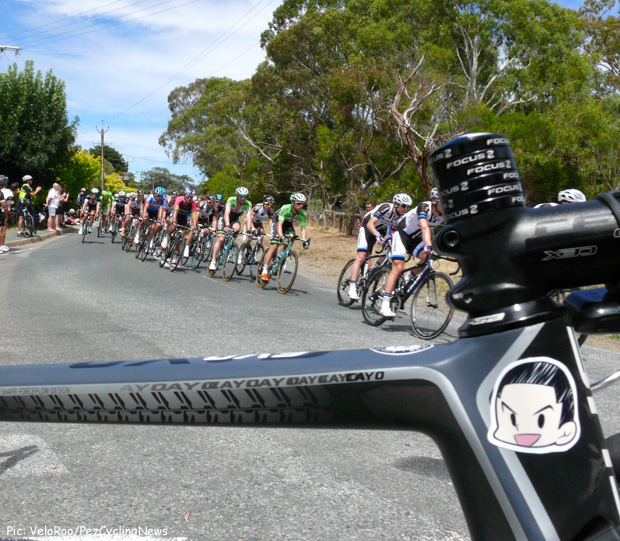 The second pass of the peloton allowed me to take this shot over my bike showing my new sticker from a Japanese Manga Artist who did Manga characters for each of the team SKY riders. In case you don’t recognise him – my one is Richie Porte.

Once the peloton were clear, the thousands who had gathered on the Houghton Hill climb and further afield beelined to stake their position on Corkscrew Hill. Hours of map scanning in preparation for our TDU we discovered a short cut which would allow us to grab some refreshments at the Cudlee Creek Tavern en route and also save some riding in the hot sun. 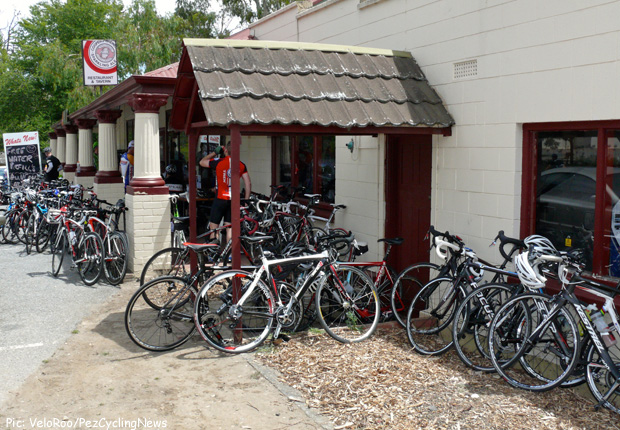 We thought we were pretty clever with our shortcut – but hundreds or even thousands more were too!

Refreshed, we and a few hundred others zipped down along the Gorge Road which also offers some cheeky little climbs and spectacular views over the Kangaroo Creek dam, before taking the sharp and narrow left onto Corkscrew Road. 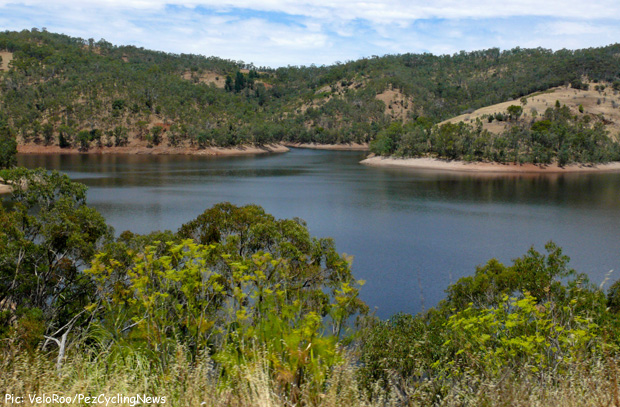 Climbing the Corkscrew one handed and taking what would hopefully be great atmospheric shots with my big camera was a challenge, but a lot of people noticed, and reacted accordingly. I felt like one of the Pros with all the cheering I was getting. 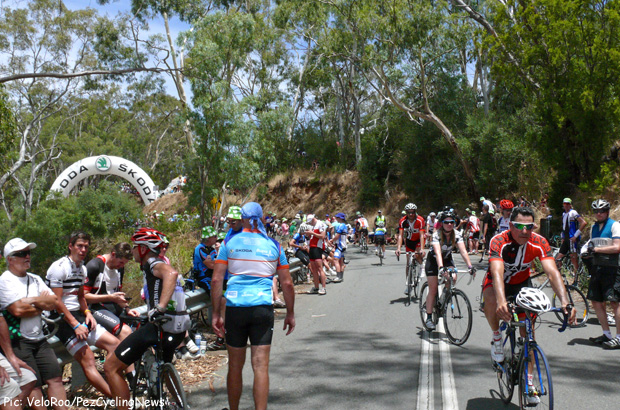 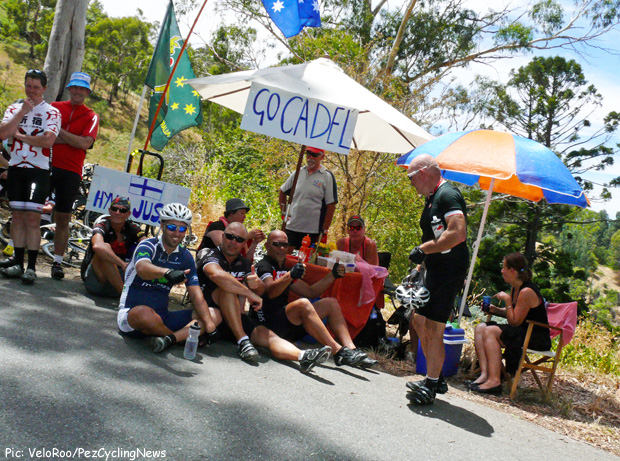 These Cadel Evans fans were staked out on the second switchback of the climb – coincidentally the exact place where Cadel put in his winning attack!

The hill was ALIVE, the place was as crazy as any Col de TdF with what it lacked perhaps in numbers to Le Tour it more than made up for in noise. The commentator over the PA system was counting down the rider’s arrival from 20 kilometers out, which may seem a lot, but as it was predominantly down hill the kilometer countdown was happening quickly. 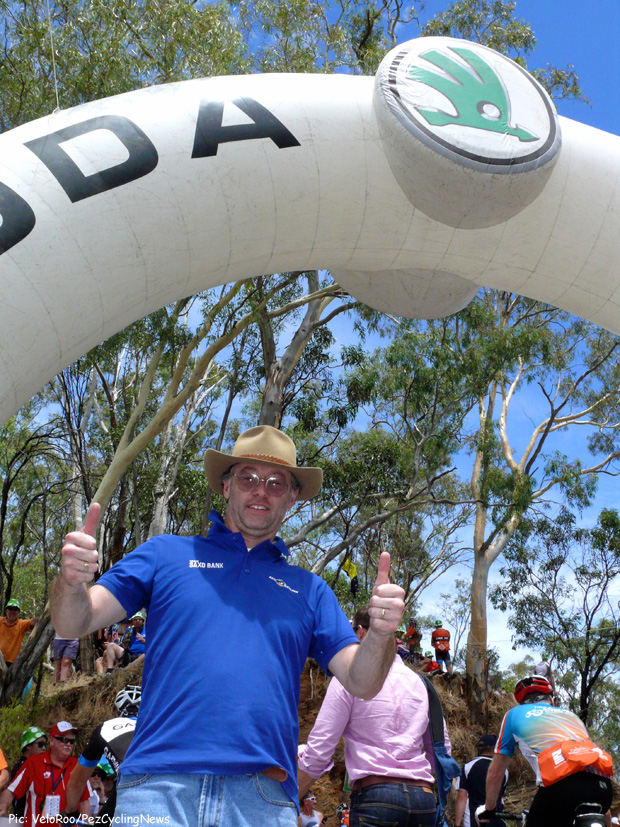 You don’t need to be in lycra to love the TDU. Graeme who had been in his spot under the arch since 9 am kindly let me park my bike in from of him – after lifting it over the fence – while I scoped out some photo locations. This is the 10th TDU for this Adelaide fan.

It had been announced a breakaway group hit the climb with a small gap and everyone went crazy when the 3 big Aussie favourites of Cadel Evans, Richie Porte and Simon Gerrans are heard to be in the breakaway. Just a few minutes later the riders are on the lower part of the climb and Cadel Evans attacked and the mountain erupted! 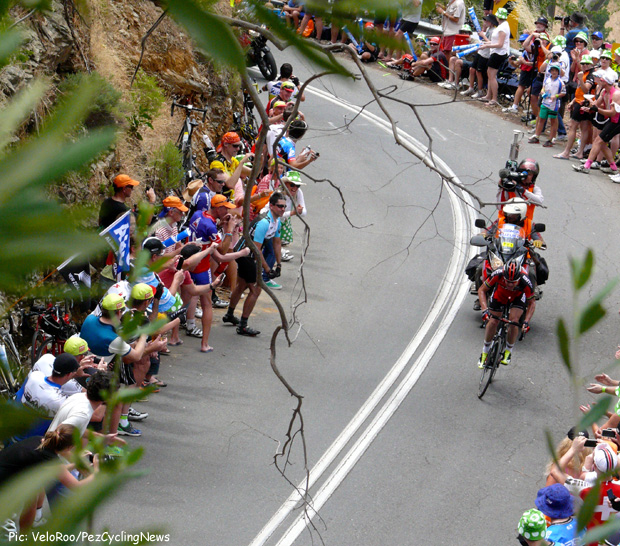 Thanks to Graeme I hiked up amongst the trees for a different view of the riders just in time to see Cadel coming up alone, daylight second. 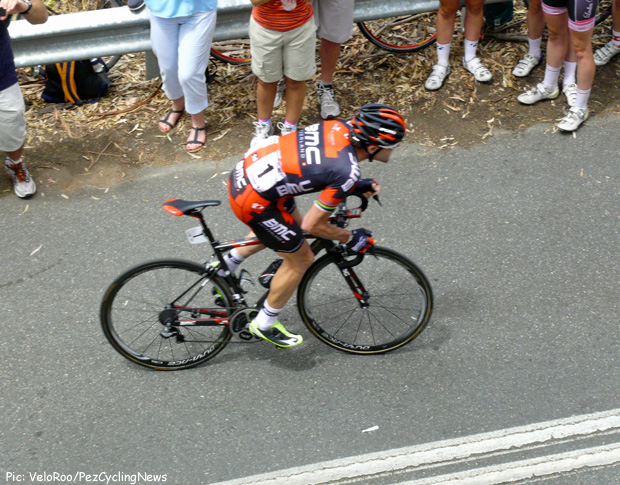 Cadel ploughs onwards toward his stage win and GC lead. 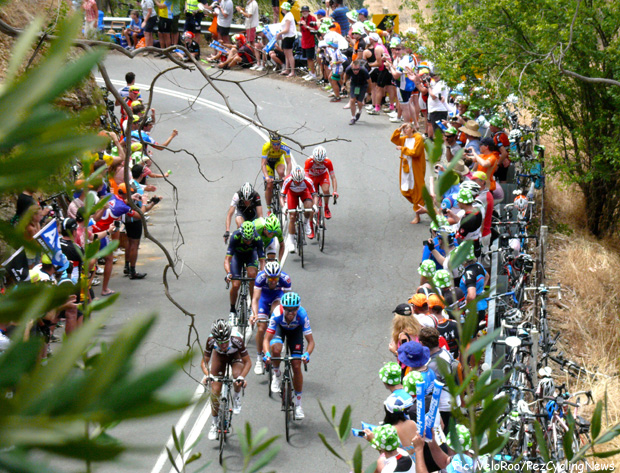 Rounding the top of the hill the noise was deafening as the crowd was whipped into a frenzy by the announcer and the action in front of them. 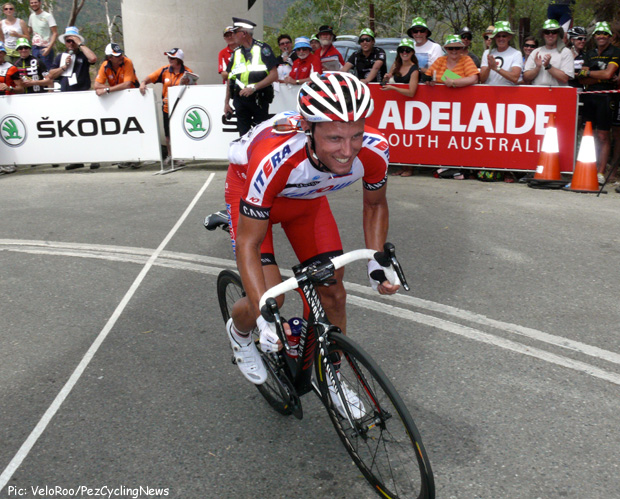 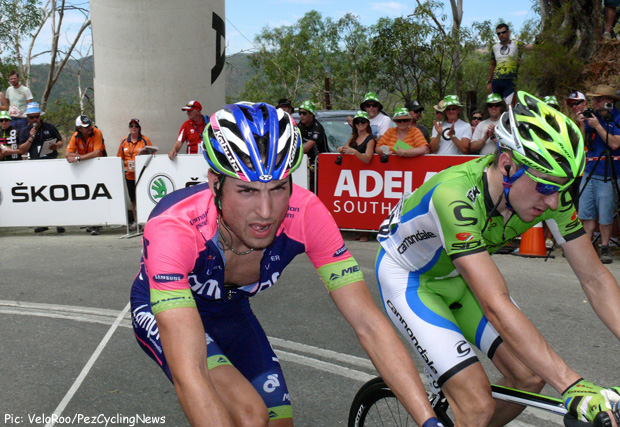 After the peloton went through the road was still closed so we couldn’t ride back down yet but the word came through – Cadel had won the stage AND he is in now in the Ochre Leader’s jersey. With bonus time and the stage win, Cadel is now 18 seconds clear of Simon Gerrans. Cadel is one of the most intense riders but if he could have heard the crowd on the hill cheer when his exploits were announced even he would have cracked a smile!

All that was left was to survive the 8 kilometer descent, get back to the city have a quick shower and relax before hitting the Unley Street party tonight. I’ll have to be on my best behaviour though as tomorrow we’ll be taking on the full strength 148.5 kilometer stage to Victor Harbour, the very same route the World Tour riders will tackle. All week the locals have bowed their heads and spoken about a certain “wall” so I look forward to reporting on my hopefully successful ascent of that…