Stage 4 of the Santos Tour Down Under was expected to be a day for the sprinters and André Greipel proved it true taking his first 2014 TDU stage win and his 15th TDU win of his career. Stage 4 was also the only occasion on the UCI World Tour calendar where amateur riders could ride the exact stage on the same day as the Pros. PEZ’s man Down Under Steve VeloRoo was there on the bike for the entire 148.5 kilometers and survived.

Named The BUPA Challenge, it is a charity event for cancer research and entry to this Aussie style ‘cyclosportif’ includes fully stocked refreshment stops, a jersey, medical and mechanical support and of course some fantastic memories…. 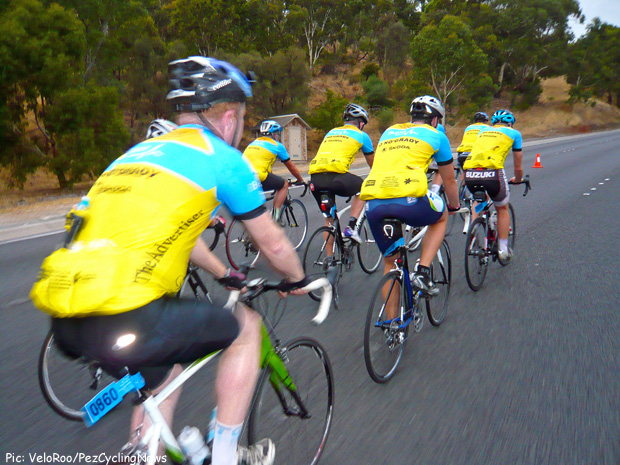 These guys were wearing the provided jersey but had modified theirs a bit with, ‘O’No Grady’ in reference to Adelaide’s fallen hero, Stuart O’Grady’s doping confession from last year.

With a choice of 4 start points along the route from the full distance right down to a family friendly 33km everyone can get involved. All along the route crowds are out encouraging the amateurs with the same enthusiasm as the Pros. For most amateur riders it is living the dream to experience what it is like for a Pro Rider. 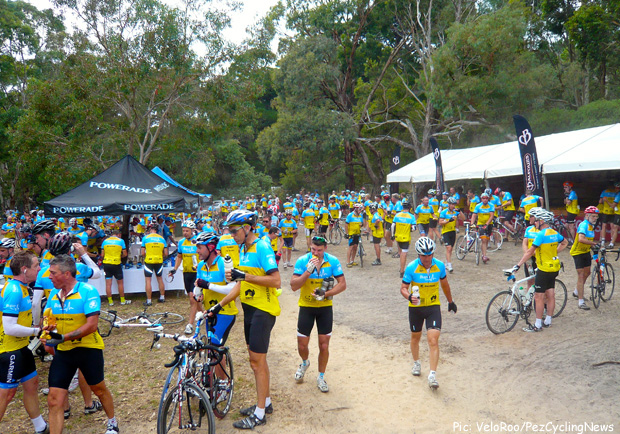 Just like the pros, the amateurs had their food and drinks all catered for along the route today – they just had to stop to get them.

With a 6:30AM start the sun hadn’t even quite come up and already over 6,600 riders were challenging themselves over the entire Stage distance through to the pretty beachside resort town of Victor Harbor. For a supposed sprinter’s day the course actually had a couple of great climbs to test the legs with the first climb out of Adelaide to Stirling 7.6 kilometers long at an average of 6% and then the KOM climb Reservoir Road above Myponga Dam 1 kilometer at 10%. This was something to look forward – or dread – after 95 kilometers and of course as an added bonus today we also managed to have a head wind the whole way.

The main highway out of Adelaide was closed for the BUPA Challenge amateurs just as it is for the Pros, highlighting the value Adelaide places on the Santos Tour Down Under. 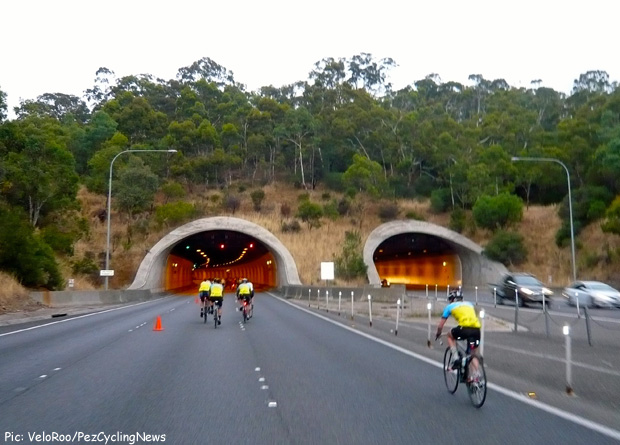 This is a bike highway now!

The riding was much like what we’d had the rest of the week in the Adelaide hills – absolutely amazing. Today we took on a few roads that were also used in Stage 2 from Stirling to Mylor but this time in the opposite direction. The most fun though was on the hill climbs where despite tired legs I couldn’t resist unleashing my competitive spirit and trying to pick off other riders ahead of me. 6,600 riders out on the road all enjoying this magnificent parcours truly was great fun. 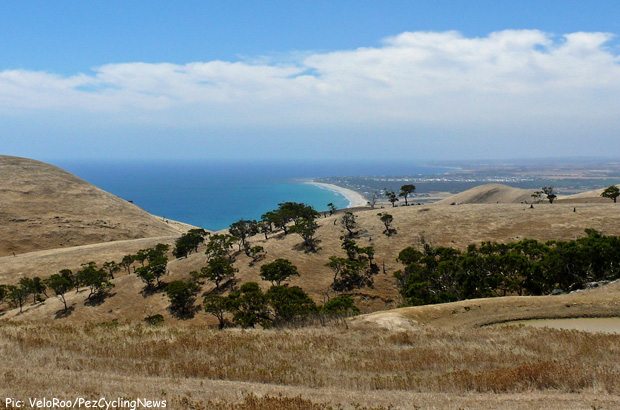 Before I knew it the KOM climb was upon me and it was made even more challenging as the approach is from a left hand intersection which took away any built up momentum. You face a wall of tarmac that disappears after a few hundred meters only to reappear once rounding the bend. Once over the KOM you ride along a ridge which has great views that take your mind off the sore legs but also reminds you how high up you are. 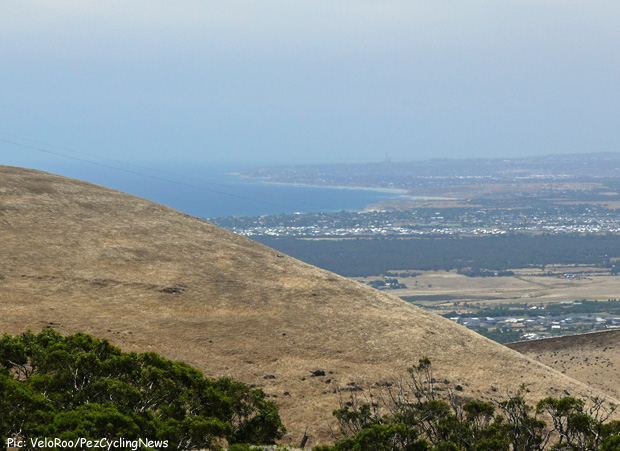 As I was pumping out the kilometers and enjoying the scenery I was thinking about where would be the best place to watch the pros come through later in the day and as soon as I rode across the dam wall I knew I had the location I wanted. 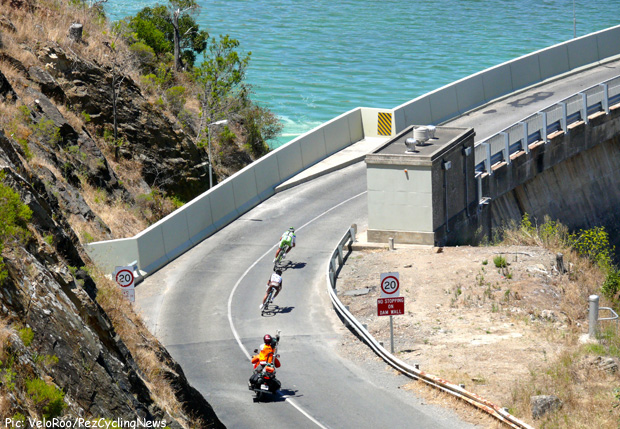 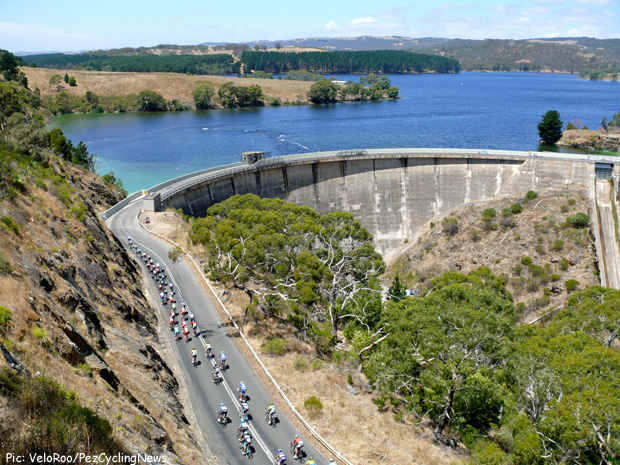 who were quickly followed by the peloton who weren’t giving the break much leeway. 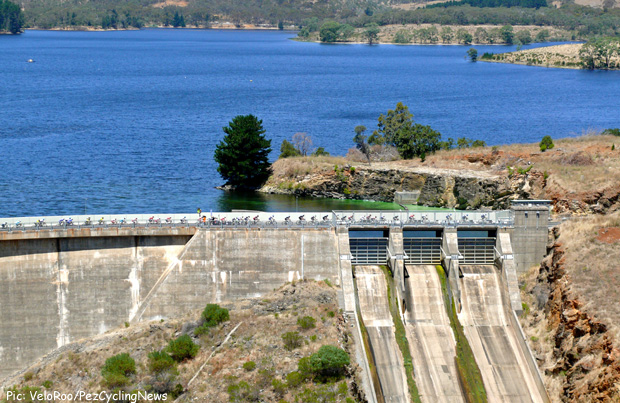 For those PEZ readers who may not have participated in a mass event like the BUPA Challenge before one of the great memories is hooking up with a bunch that rides at your pace, or perhaps a little stronger and to test yourself to see how long you can stay on. Aware that I still had 50 kilometers of riding to finish the route then pack the car and get back to the dam before the police closed the roads I was keen to find a hammer group.

From the 30 kilometer to home mark I found them, a group of 4 soon turned to 6, then 8 of us. The remaining roads were twisty and still involved some climbing and were exposed to increasing headwinds but we pinned our ears back and went for it. Rotating in turns provided some relief but the pace was the fastest I’d ridden for a long time. The prize would be to make it back to our spot. 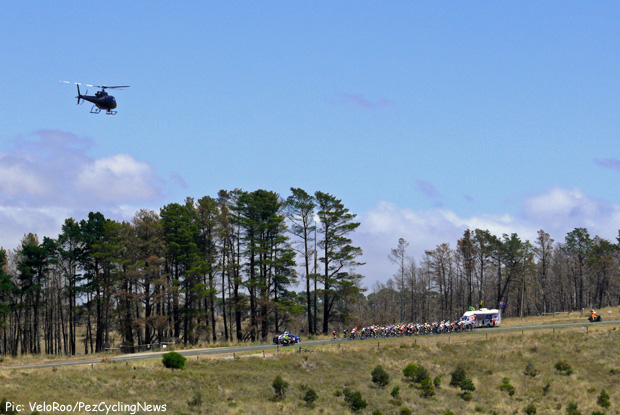 The helicopter and camera bike were following Steve and his group’s progress….

The final descent into Victor Harbor is technical and fast and a hell of a lot of fun. 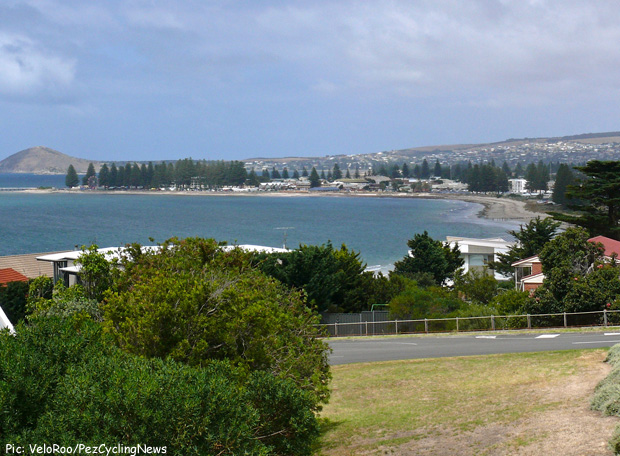 With 3 kilometers to go the barriers were in place and fully lined with cheering spectators. Through the last turn as quickly as possible there is enough left for a showy 300 meter “sprint” if I could call it that, over the line. I am elated and drained. Under the finish banner, a few hundred have already gathered sharing their own tales of their rides. We didn’t have any time to waste though as we heard that the Pros were out there setting a blistering pace. Time for a second effort of the day now to make it back to that dam!

We make our viewing position with about 10 minutes to spare and our elevated position above the Myponga Dam allowed us a great view of the peloton fly down the hill, disappear around a tight and steep 180° bend appearing below us and attacking the narrow approach to the dam wall. Having ridden this section just a couple of hours previously, I had a hyper sensitive understanding of just how tight the bend was. 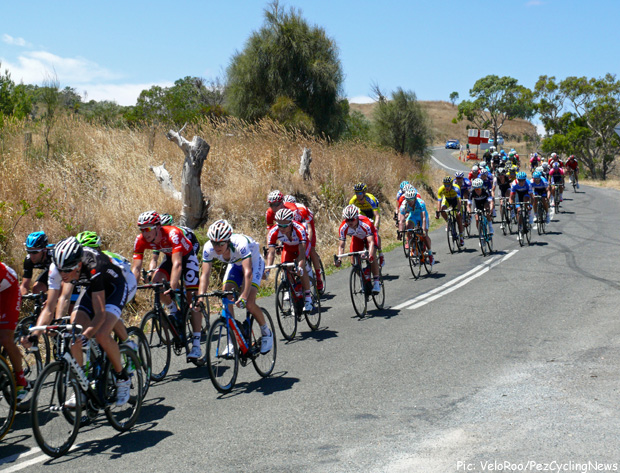 After the peloton had flown by we packed up and headed for Adelaide and learn en route that Adam Hansen’s and the Lotto boys great work dragging the pack around at a 42kph average (just a few kph quicker than my time earlier in the day) was well rewarded with a maiden 2014 stage win for the Gorilla, André Greipel. 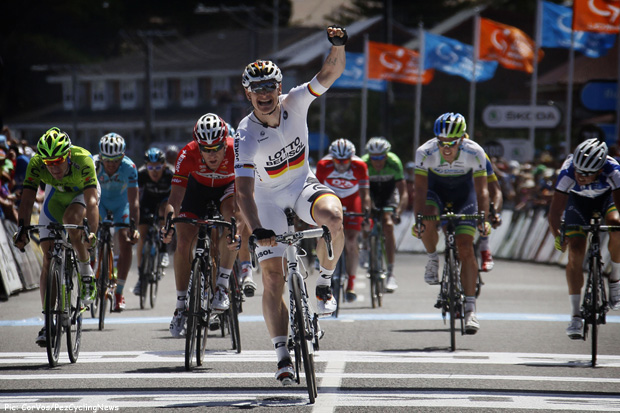 Tomorrow we head to McLaren Vale to the party hill that is Old Willunga and like the day before the Champs Elyssee the winner of the Ochre jersey is usually decided on this day so the atmosphere should be amazing again. The GC battle is far from decided with both Simon Gerrans and Nathan Haas clawing back some seconds on Cadel’s lead thanks to some bonus seconds at the sprint points today. It should be a battle royale for the GC title tomorrow amongst the Aussies with the odd Dutchman or Italian thrown in for good measure.

Aleksandra Burchenkova on the podium of Russian track championships

Drapac up to fifth in Tour Down Under Team Classification