When the folks at Team Skin asked if we could help ‘em get the word out, it was a no brainer… They’re raising funds to help a team mate battle cancer by auctioning a way-cool, and until now, way-exclusive Team Skin jersey.

We featured Team Skin racer Darcy as a Daily Distraction a few months back, and her jersey attracted almost as much attention as she did. We all know that team kit is precious stuff, made even more so by the fact that only your team mates get to wear it… But nothing is more important than helping a team mate.

Team Skin’s Jeff Corcoran sent us this email:
“A good friend of TEAM SKIN has been battling cancer for some time…we decided to try our luck at a fund raiser… We received A TON of folks asking about our jerseys after it appeared on your site…we politely replied letting them know they were not for sale… Tonight we put a jersey up on ebay, hoping to help our friend Ami battle the cost of everything surrounding her battle with cancer…” 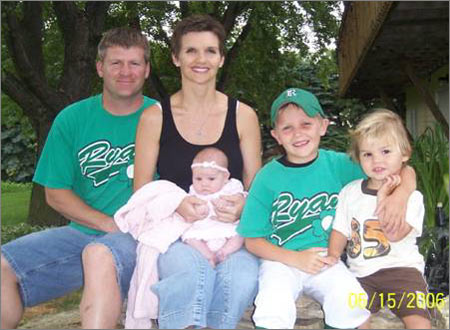 Ami, her husband, Shane, and their three children, Owen, 8, Will, 2, and 2 month old, Evangeline.

All proceeds go to Ami, who is 33 years old and was diagnosed with breast cancer when she was 3 months pregnant with her third child. During her pregnancy, she went through multiple surgeries and months of chemo. On April 12th, she had her baby girl and thought she would soon be back to work. Two weeks after the birth, she found out she has a very rare type of cancer in her liver. Ami is now seeking treatment at the Mayo Clinic in Rochester and the University of Pittsburgh.

You can support Ami by: BIDDING ON THE TEAM SKIN JERSEY HERE