PEZ’s Nat King recently traveled to San Diego to ride the self-proclaimed “Most unique cycling event in the US”, the Belgian Waffle Ride. He went there aiming for victory but came home from this crazy 217km race over dirt singletrack, steep bergs and more with another experience entirely in what was simply an epic day. 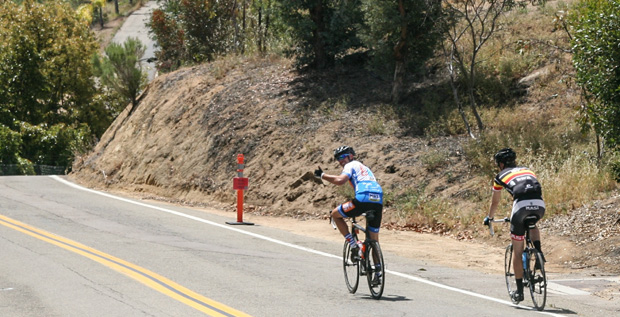 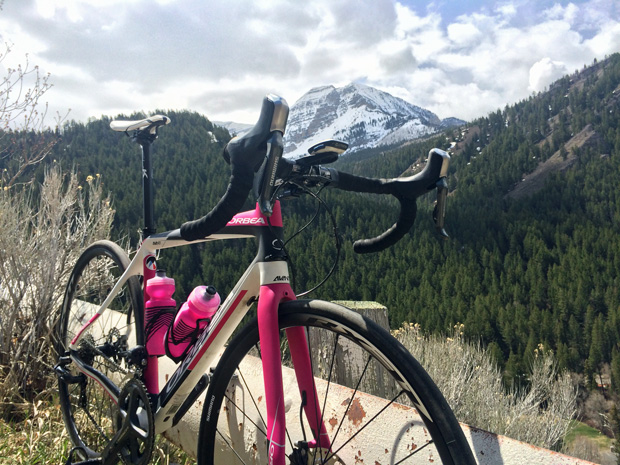 * Win. Or at least podium.
* Destroy vast quantities of food/beer upon finish. 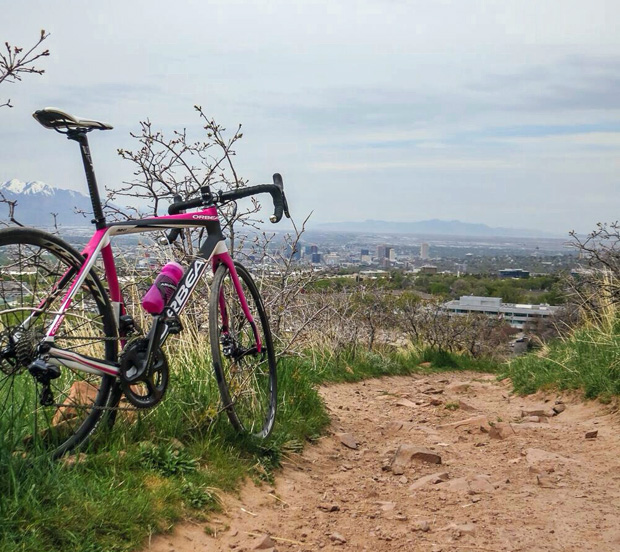 RESULT:
The Belgian Waffle Ride, known as the BWR, is incredible. No, it wasn’t incredible because of the course, or the organization, or the passion of those participating and putting it on. It wasn’t because when I stopped twice after a crash and a flat, nine out of ten competitors asked me if I needed any help. It wasn’t even because at heart, I think the BWR is what cycling and “racing” should be. It was because I was concurrently treated with the polar opposites of visceral anger and extreme joy, deep, uncharted mental waters. The rage kept me pedaling. The #HAPPY kept me smiling. 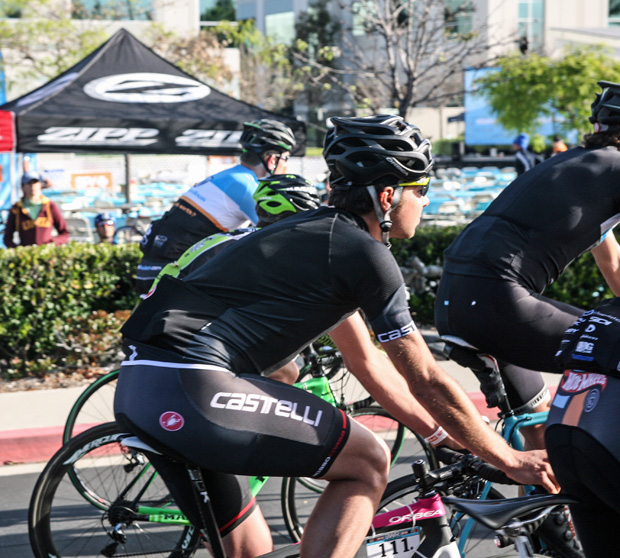 Heading off for the 217km adventure

Immediately prior to the course’s first deviation onto dirt I found myself in the front group (BWR BATTLEPLAN OBJECTIVE ONE: Success). From the corner of my left eye, a Large Something was rushing up (cycling verbiage: “full gas”) the hill in an attempt to chop the rest of us onto the upcoming singletrack (more verbiage: “holeshot”). Large Something slammed into my handlebars like a bull in a china shop, sending me hurtling into the poor bastard behind me. We lay on the ground in a mangled pile. I swore. Large Something looked back with a glance, and continued on his way.

Stumbling to my feet, I grabbed the Orbea to a shriek of pain from my downed colleague (name: Trent, mountain bike racer from La Jolla, CA). I looked at my steed. His foot had jammed between the wheel and seatstay of my frame, up to his ankle, in one of the most bizarre cycling accidents I’ve ever been witness to (it seemed less-than apropos to snap a photo). The foot wasn’t coming out. A friendly veterinary surgeon stopped to assist. We dislodged his ankle, breaking spokes on the way to free the limb. Sag support was summoned, and I bid adieu to Trent as he climbed into the car (as it turns out, I’m a JACKA$$). I had other plans that didn’t include my now-unrideable bike. 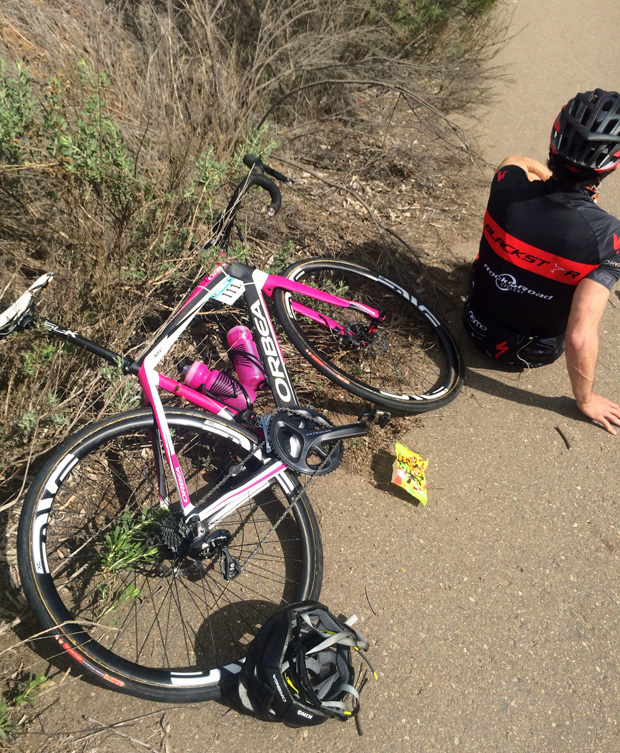 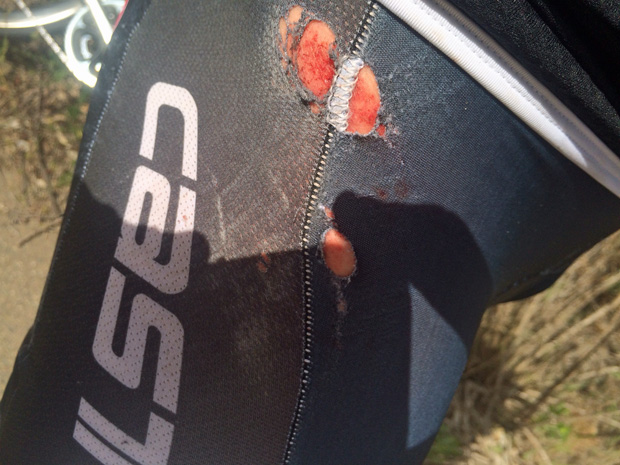 While Trent sat immobile on the ground and I attempted to regale his spirits with tales of the CRUSHER IN THE TUSHAR, riding, and double rainbows, I was covertly texting my reinforcements/superhero wife (see: KEMI). Conveniently, Kemi owns a women’s racing team. Thus (and doubly conveniently), Kemi is cozy with the SRAM Neutral Race Support crew. While not exactly providing follow support for the BWR (something about driving a Volvo on singletrack being difficult/illegal), SRAM NRS was at the event.

Logic follows. Kemi wrangled a bike from SRAM, and after a few navigational errors, made her way to my location approximately 1.46 hours post-wreck, providing the best mid-race bike change I’ve ever received, complete with seat height measurement – as the stragglers of the final wave were passing by. I pedaled the freshly-built Specialized Tarmac directly onto the singletrack with its 23mm race tires. It was perfectly out of its element, and I was getting cozy in mine. Shortly thereafter, I discovered the perils of a new bike, and the front derailleur became inoperable. I didn’t really care, put my head down, and flipped the six-hour tempo switch. 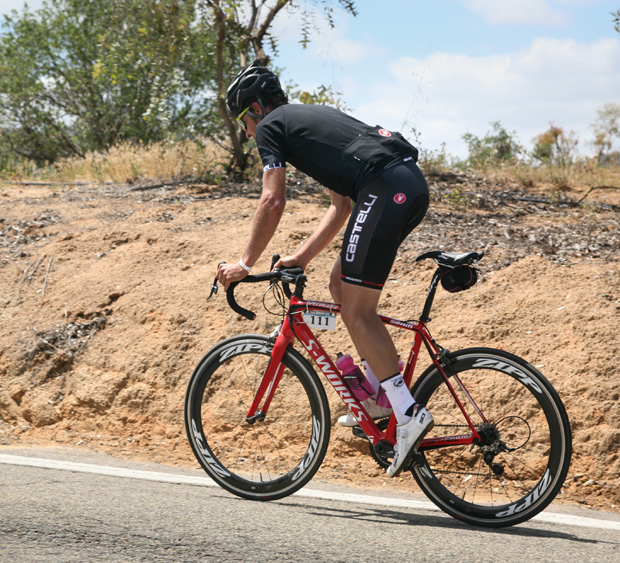 On the new steed and ready to go again

Cool things happened. The hundreds of people I passed cheered me on. Aid station workers were psyched. I was psyched. I was singing. Saying hi to everyone I saw. I was in Hell. And I was loving every infernal minute of it. I was twisting my cranks with sheer rage, mad at the Large Something for knocking me down, mad at myself for not staying up, mad for taking someone out with me. Mad that my bike was broken. Mad that I was feeling more or less useless, in the grand scheme of things. Mad that Chase was dead. Mad that I was (bikeracer) fat. Mad that cycling wasn’t like this at every race. Mad that I rode alone, like most days. I didn’t have to. I knew I wasn’t going to finish in any sort of respectable PRO-like time, but something about settling into a group and riding a nice pace to the finish felt like cheating. I wanted to obliterate myself. 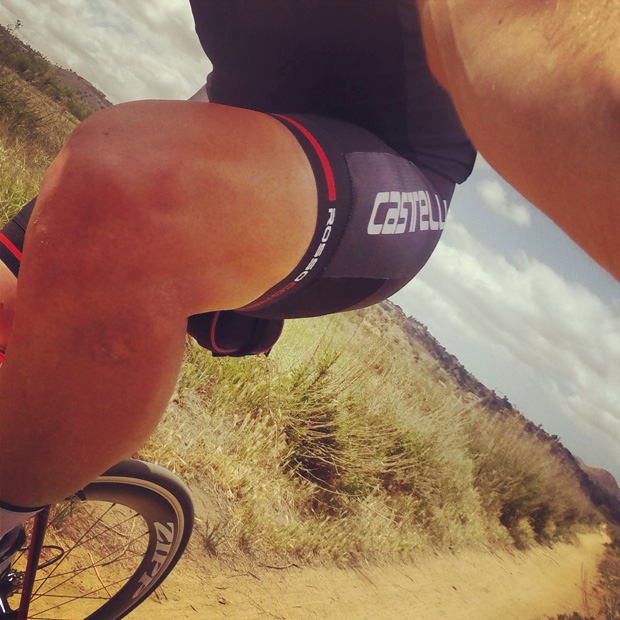 Dirt tracks, a borrowed bike with Zipps and 23mm tires and a selfie on said dirt track!

The grinding continued. Others can appropriately describe the horrors of the route. Hardest ever? No. But it was hard. I flatted somewhere in the vicinity of Mile 100 at the second watercrossing, the loaner’s insufficient tires falling victim to the rockgardens around Lake Hodges. A moment of panic – I couldn’t loosen the valve extender from the deflated tube. My pearly whites came to the rescue, and I was able to roll on.

Mile 115 approached. Except, I didn’t know it was Mile 115. Paying attention to ride time and mileage is something I only do when I have to: Intervals, winning races, and helping other people win races. None of these conditions applied. The approach to Mile 115 is a steep, dirt hill. It’s loose, it’s dusty, it’s filled with babyheads, and it’s not very pleasant after six hours on a bicycle saddle, but I rode it anyway. As I ascended, rhythmic thumping sounded over the arid atmosphere. I could’ve sworn I was hearing Deadmau5. It got louder. My back arched my body out of the saddle, and at the crest of the hill I saw what was surely an apparition. 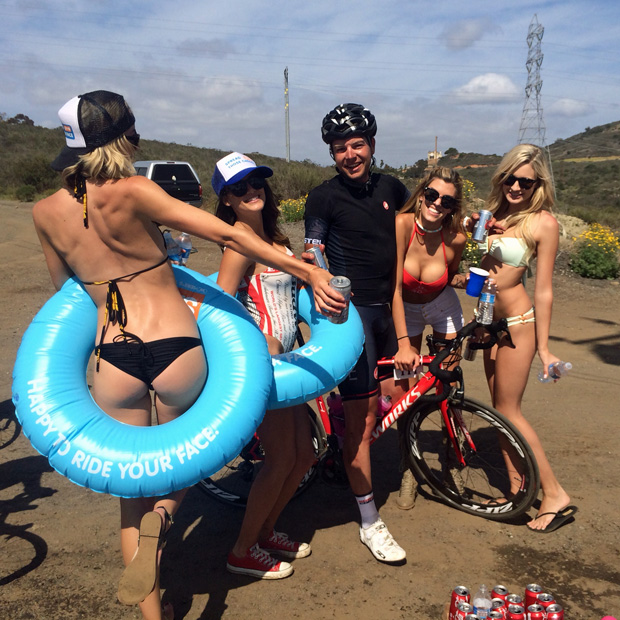 I was tired – but I wasn’t delusional. There was an oasis ahead. Women in bikinis. A kiddie pool. Innertubes. Beer and Redbull. For the first time in the BWR, save my bike change, flatting, and hurriedly refilling water, I stopped with purpose – to marvel at something I’d never experienced in even the coolest of road races. I joyously slammed both proffered beverages, and realized that I was having a lot more fun than the guys in the front group. I awarded myself with a shit-eating grin for the remaining 22 miles.

The ascent of the DoublePeak loomed, a hill pitching to 23% in parts. For the first time in approximately three years, I felt my quadriceps begin to cramp. I was blissfully unaware that I was approaching seven hours on the bike. I tapped my pink MANUALFORSPEED bottles out, and laughed my way to the top of the peak, pouring a tiny can of Coke down my throat.

The descent to the finish, some ten miles distant, seemed far longer than it was as time slowed down into a drunken, glycogen-depleted stupor. I’d never throttled my body at a constant 80%, solo breakaway effort for six hours. My organs were beginning to hurt. Kidneys were becoming mutinous, trying to punch their way through my back. And I was still smiling. 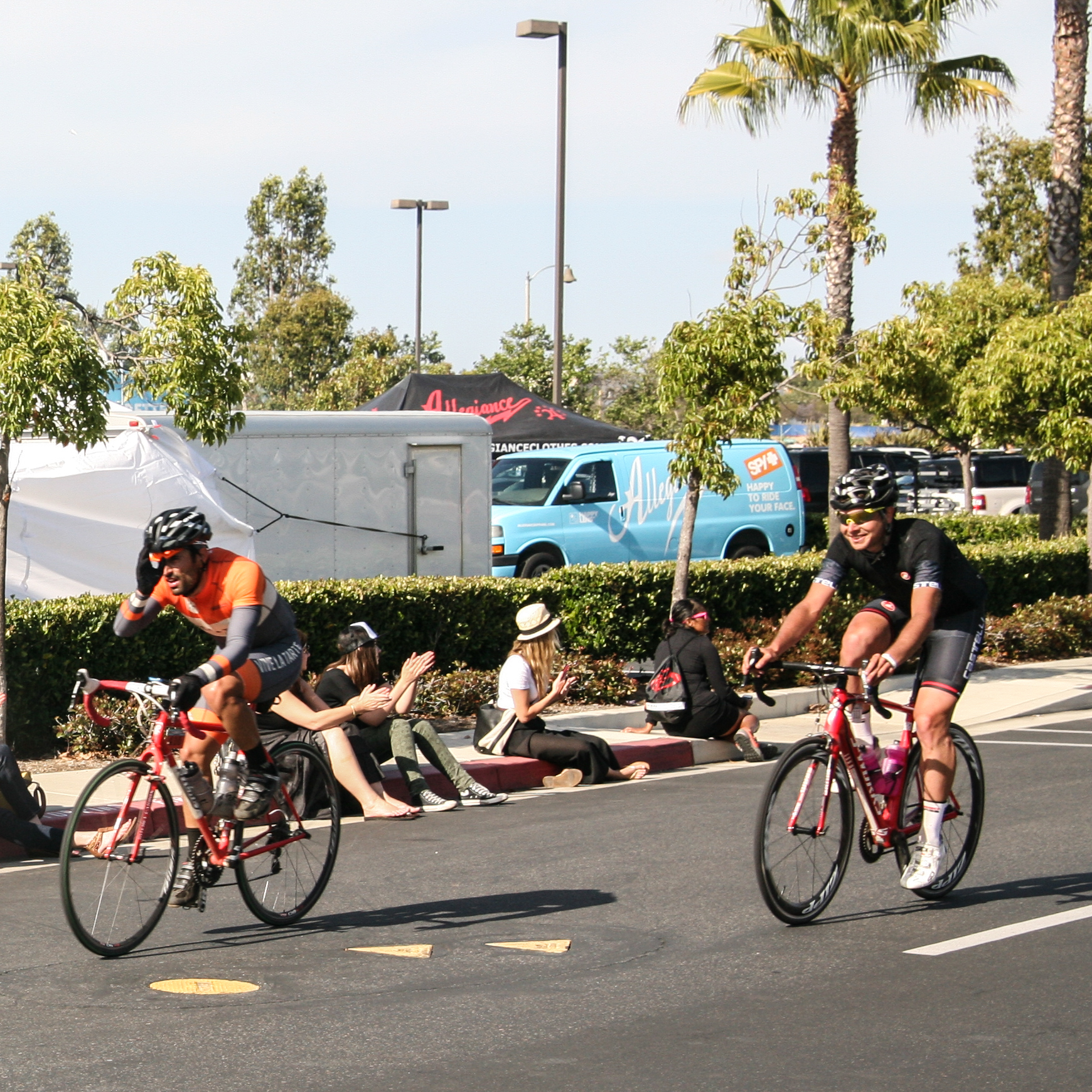 Done. Strava-verified. Twenty minutes later, I smashed the BWR waffle eating contest against two twelve year-olds and a guy who hadn’t ridden (BWR BATTLEPLAN OBJECTIVE FOUR: Complete). Winning something was requisite for my mental health, because deep down, I’m still a bike racer.

I’m not sure where I finished the BWR. It’s nice to think that I could have done well had I stayed in that front group, but maybe (probably) not. Life does, in fact, go on after a bike practicing contest, and all I could do was smile at the end. I got the distinct vibe that everyone around me really didn’t give a shit about who’d won. The badass who completed the course on an Elliptigo (in 13 some-odd hours) received more attention than the category winners. The simple joy of riding with a bunch of other passionate lunatics was sufficient.

Yes, Mr. Marckx (Spy Optic’s affable CEO, and the BWR’s creator) and company, I will be back. I need all the happy rage I can get. 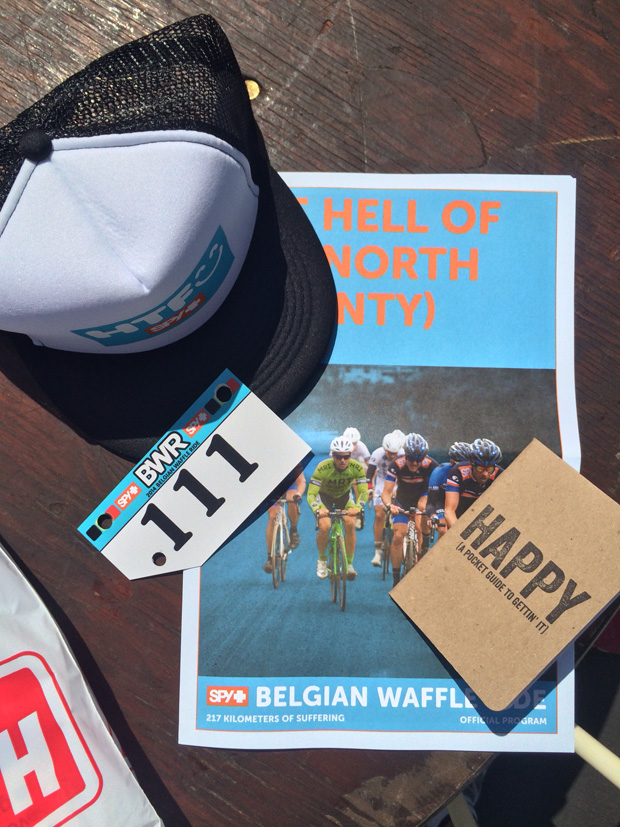 For more on this crazy and yet amazing ride check out the BWR facebook page.