With the 2013 season drawing to a close it’s time for the Orange team of Euskaltel-Euskadi to close its doors. After almost 20 years in the Pro Peloton the Basque team failed to get the sponsorship dollars to continue for 2014 leaving a big orange hole in the Worldtour. Here’s a look back at their time in the peloton with some of the best images from the last two decades. 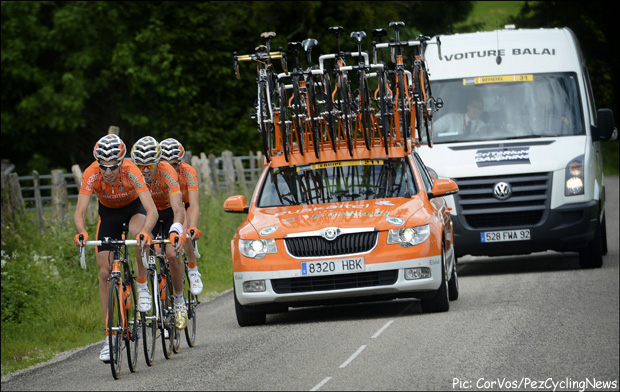 The pre runner of the current Euskaltel-Euskadi team started back in 1994 under the name of Euskadi-Petronor but they’ve been known as Euskaltel-Euskadi since the Basque telecommunications company took over the role as major sponsor in 1998. So as the broomwagon catches up to the team let’s have a look at some great images of this iconic team from its time in the pro peloton. 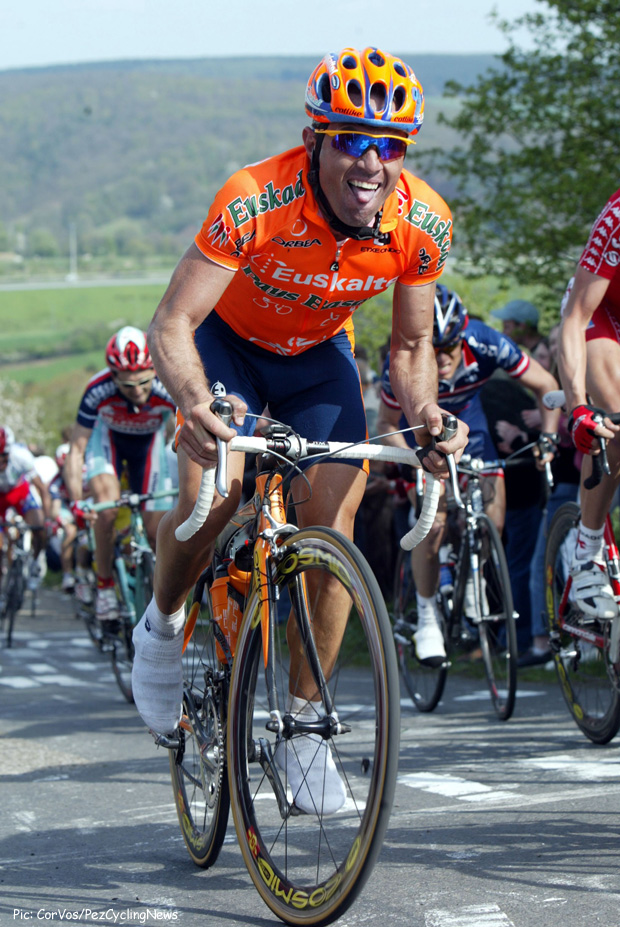 One of the most popular Euskaltel riders in the early ’00s was David Etxebarria who was known for his attacking riding and he rode for the team from 2001- 2004. Despite his high visibility in the attacks and front groups he didn’t actually cross the finishline first that often with one of his best results being 3rd in Liege-Bastogne-Liege in 2001. 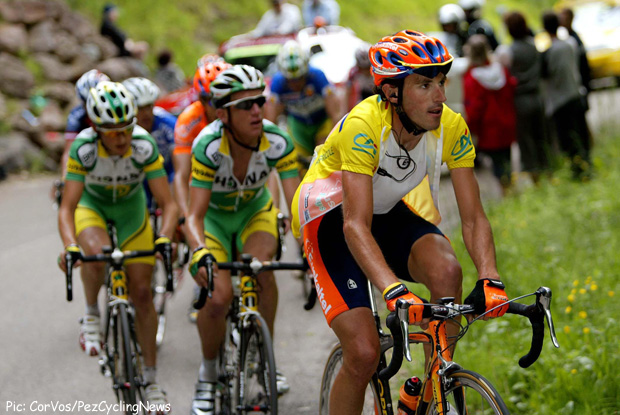 Extebarria was popular with the Basque fans but the most popular and most successful rider by far for the team was Iban Mayo (2000- 2006). Wins included stages in the Dauphiné, Tour de France and GC wins at the Dauphiné and the Tour of the Basque Country. Once touted as a true rival to Lance Armstrong in the US Postal years Mayo’s career went downhill after a series of doping controversies and an eventual suspension in 2008 and he never raced again. 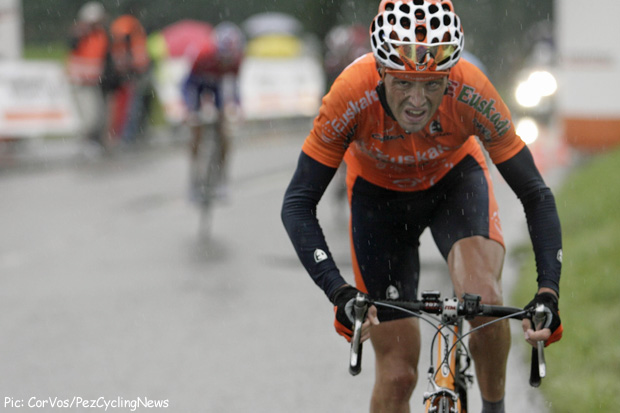 Samuel Sanchez turned into the replacement star for Mayo at the team and he recorded some huge victories with the squad with which he has been since his pro debut in 2000 including a win in this wet, windy and cold GP de Zurich in ’06. 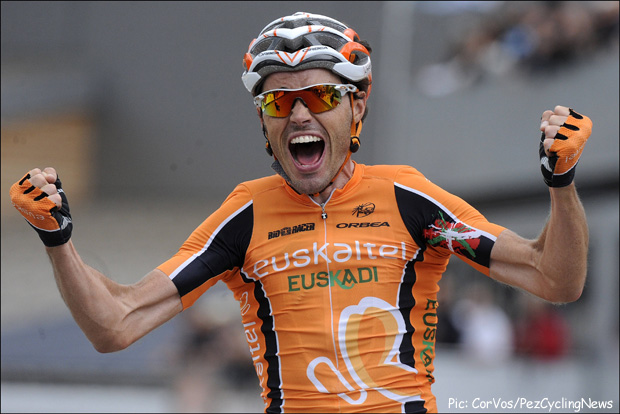 Other victories for Sanchez include this win in a mountain stage in the Dauphiné in 2012, stages in the Tour of the Basque Country, Tour de France and more but the victories have dried up somewhat these last two years although he did take one strong and smart stage at the Dauphiné this year. 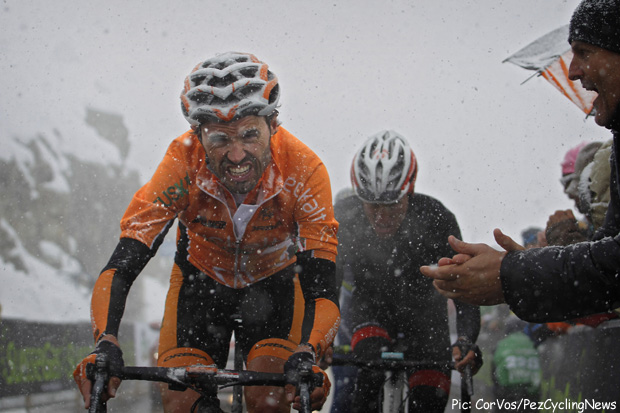 The Giro however was not a happy place for Sammy this year. 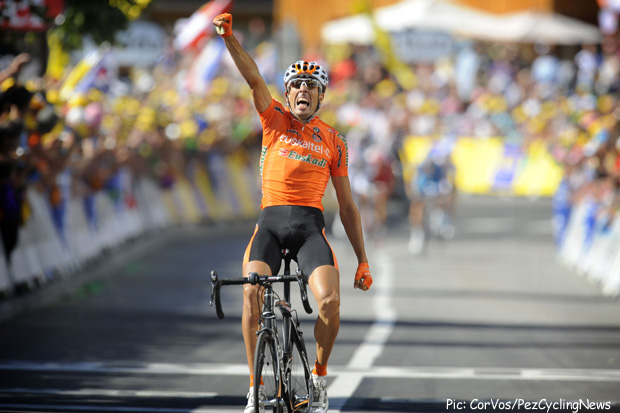 One of the most popular riders at Euskaltel was also responsible for one of their darkest moments. Mikel Astarloza took this stage of the Tour de France in 2009 only to be later declassified for a postive EPO test. Astarloza always denied the doping and the team stuck by him and even re-hired him after his suspension. 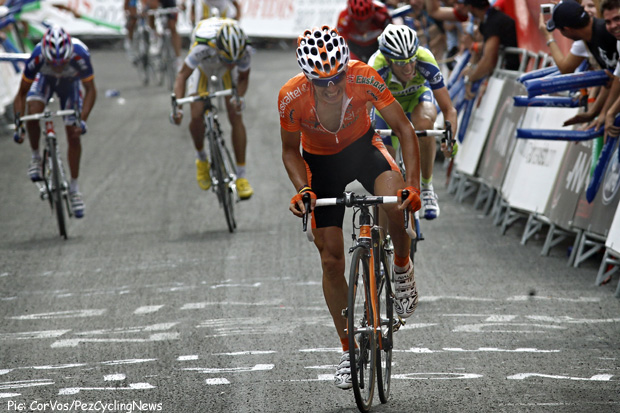 One of Euskaltel’s biggest modern stars is certainly Igor Anton. 2010 was a breakout year for Anton that saw him take two stages in the Tour of Spain, top 10 places in Liege and Fleche and various stage wins and high GC places throughout the season that included a stage and 9th overall in the Tour of Romandy. 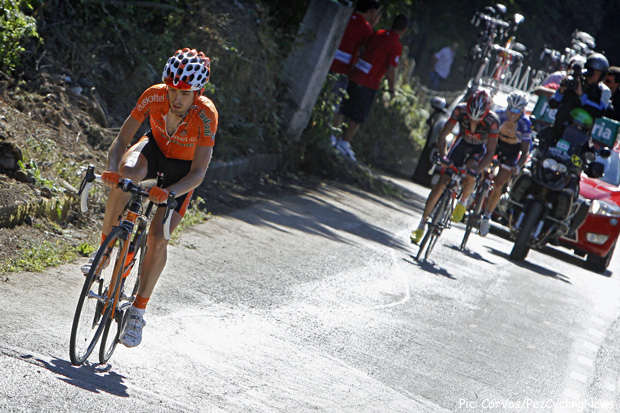 Mikel Nieve is another of the modern stars and also had a great 2010 winning a stage at the Vuelta that year in what was probably Euskaltel’s best ever GrandTour in terms of results. 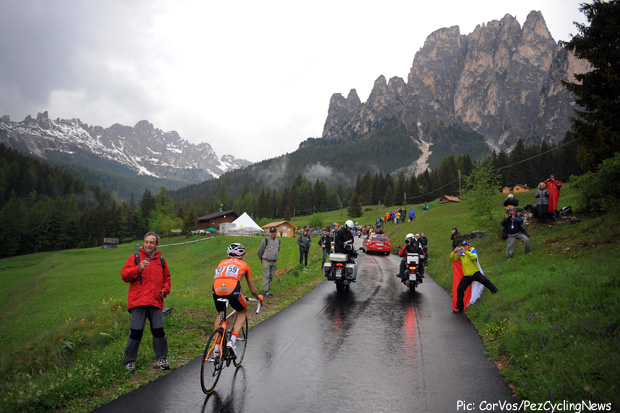 Nieve is one of the few that have got the ‘no contract’ devil off their back with Team Sky recognizing his talent and taking him on for 2014 where he will have the job of being a mountain lieutenant for the likes of Chris Froome and Richie Porte. 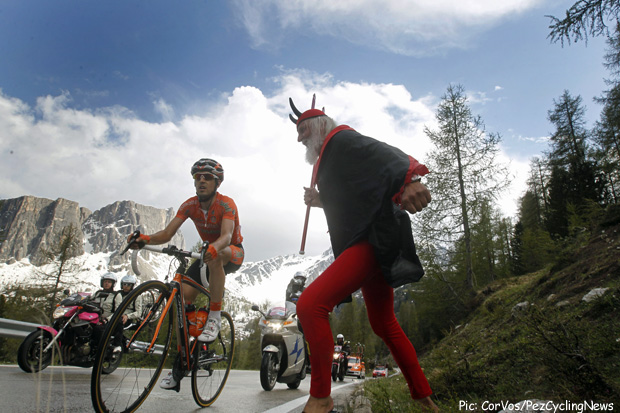 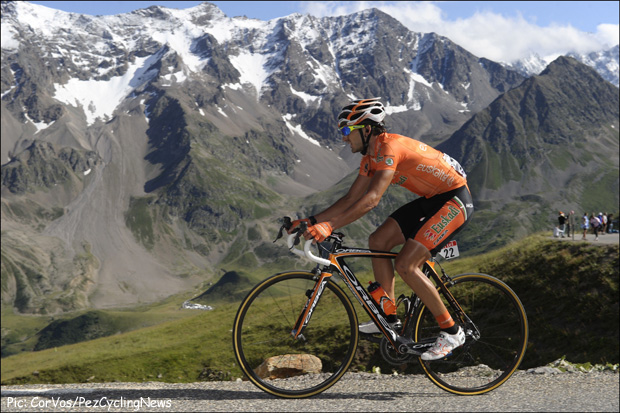 Another rider to find a team for next year is Gorka Izagirre and his brother Ion who are both going to Movistar. 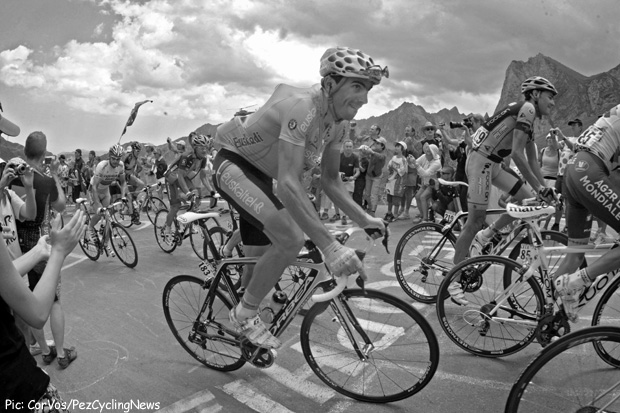 Egoi Martinez started with the team as a domestique in 2002 and came back to the team in 2008 after a two year sejour at Discovery Channel in ’06-’07. 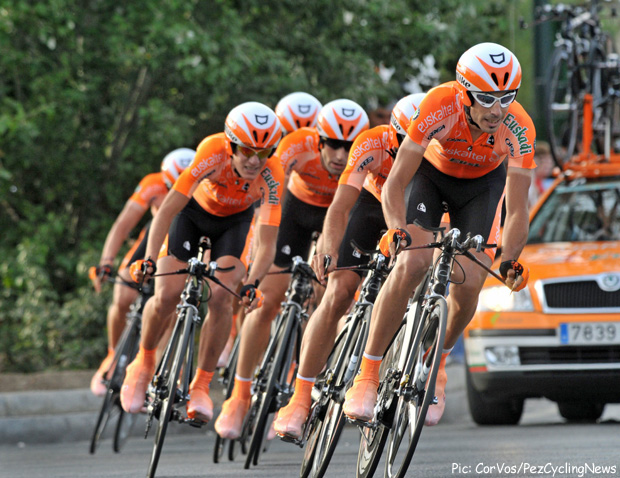 The Orange squad were never great in Team Time Trials – or Individual time Trials for that matter and would often lose large amounts of time to the other GC hopefuls. 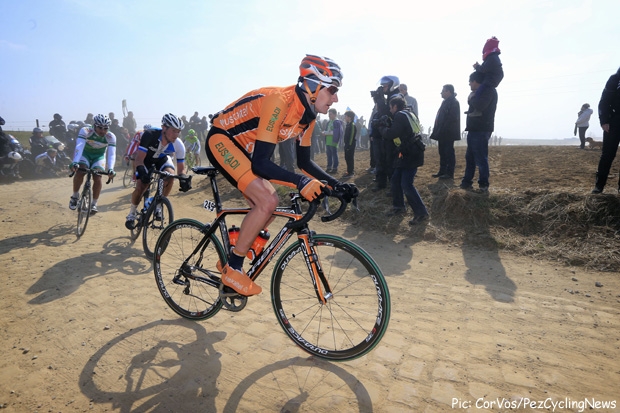 Another area where Euskaltel didn’t excel were the cobbled classics where it was a common occurence to have zero finishers for the team. 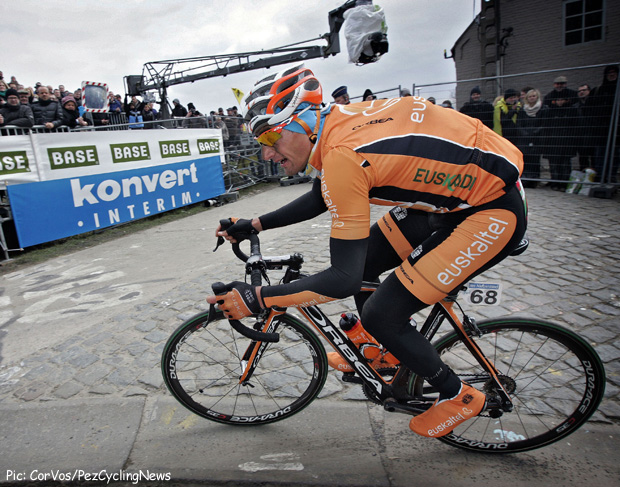 A new theme for the team this year was the employment of non-Basque riders with recent Pez interviewee, Greek Champion Ioannis Tamouridis having a fine attacking season for the squad. The foreign rider’s much needed UCI points were enough to keep the squad in the WorldTour but unfortunately not enough to attract the sponsors for next year. 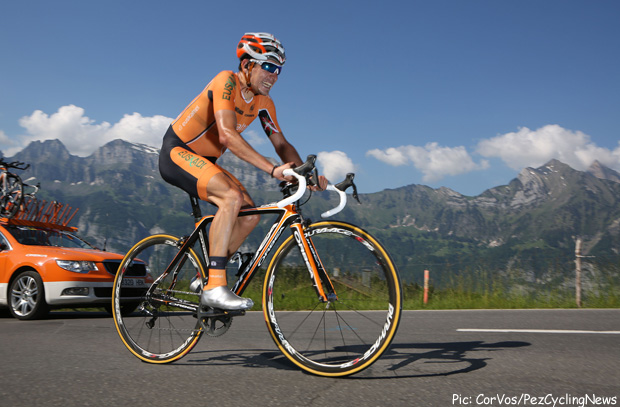 Slovenian Robert Vrečer was another of the foreigners taken on and is just another rider now searching for a gig for 2014. 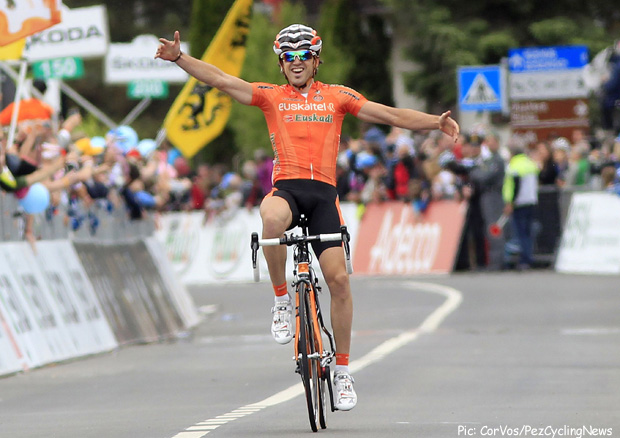 This photo above could be the real reason for the collapse of the team though – it’s a photo of the last GrandTour stage win for Euskaltel back in May 2012 at the Giro when Ion Izagirre triumphed in the 16th stage. Unfortunately the big wins – and even the little wins have been lacking in recent years with the team often seen in breakaways but not often in the lead group at the end of the race. 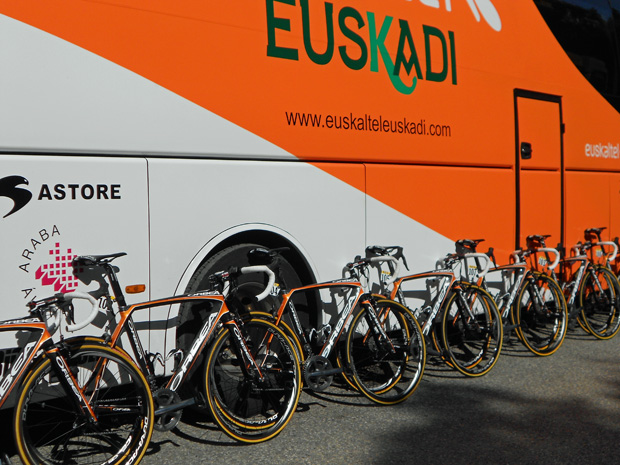 Bikes, buses, team staff and riders. They’re all looking for homes for next year.