PEZ On Scene: The Omega Pharma – Quick-Step pro cycling team is one of the most successful and it’s always a pleasure to see how a big team functions behind the scenes. PEZ got a close up look at their recent Spain training camp, meeting the riders, taking a spin in a team car and eating a nice lunch. Could it get any better?

It’s that time again, yes a day out with the Omega Pharma – Quick-Step team and this year there was the added attraction of the team presentation. As always the offer of coffee and a drive in a team car from Alessandro Tegner, OPQS press officer, was easily accepted and also the prospect of lunch in the rather well appointed Sol y Mar hotel in Calpe on the Mediterranean coast was the icing on the cake. 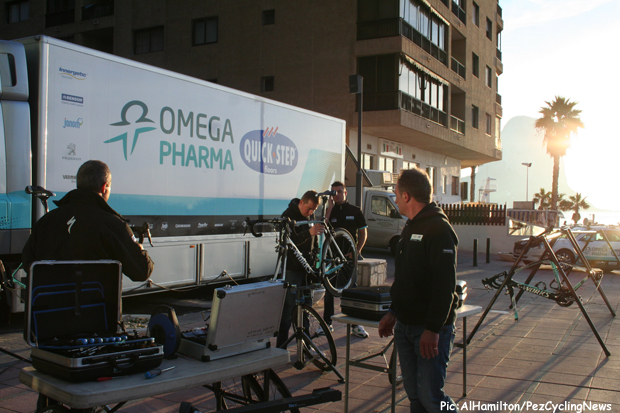 The Omega Pharma – Quick-Step team had set up their trucks on the side of the hotel facing the sea and also where the sun comes up in the morning, the forecast was for a sunny and warm day, but the heat was taking its time to filter through the coastal mist. It could have been worse and they could have been round the other side of the hotel in a back street, like the Belgian Topsport Vlaanderen-Baloise Pro Continental team were.

After sorting out my seat for the day with Alessandro there was a good hour just to soak up the atmosphere of the riders getting themselves ready for the ride. The riders know what they are doing, let’s face it they do it every day, the problem was the TV camera men, there were too many of them for the amount of motorbikes and DS’s who wanted to drive them. Davide Bramati and Wilfred Peeters drew the short straw and were stuck with the motos. 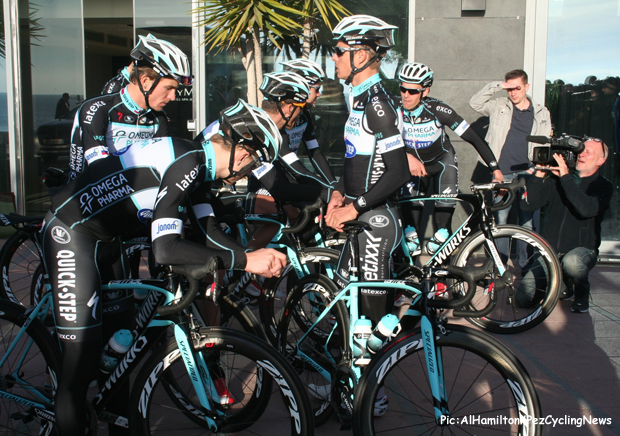 Tony and the guys

Most of the lads were ready and waiting, including World time trial champion Tony Martin, his Specialized S-Works Shiv TT bike was probably as big a draw as any of the riders. As befitting the champion that he is; the rainbow bands boldly feature on the frame, you can see the speed oozing out of the bike, and the uncluttered look helps nearly as much as the fastest man against the clock onboard it. 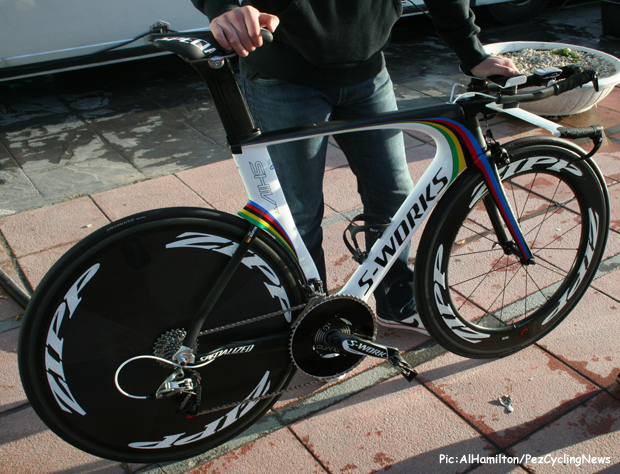 As always with professional riders; last minute adjustments needed to be made, Tom Boonen was messing with his shoe plates, better to be doing that now in January than later during the season. It was good to see that Alessandro Petacchi, a rider with 183 victories, including 22 stages in the Giro d’Italia, 20 stages in the Vuelta a España and 6 in the Tour de France is not above adjusting his own brakes. 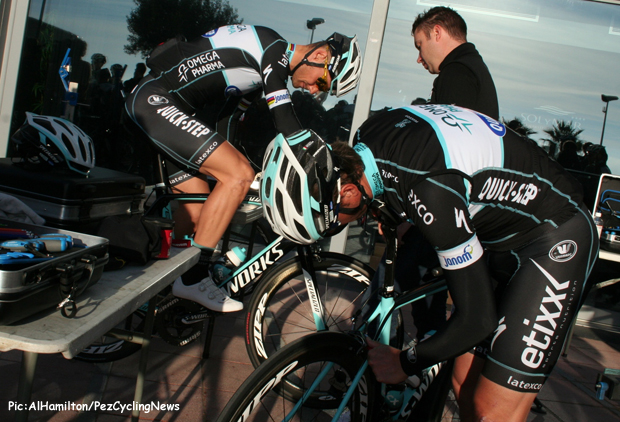 Mark Cavendish appeared in his British champion’s jersey and opposite to recent rumours he didn’t look over weight, the white jersey with the red and blue bands was flat across the stomach. Later in the day, during the interviews, he admitted to using weight training this winter, but there is no way you could say he was ‘chunky’ or bulked up, fit and lean I would say. 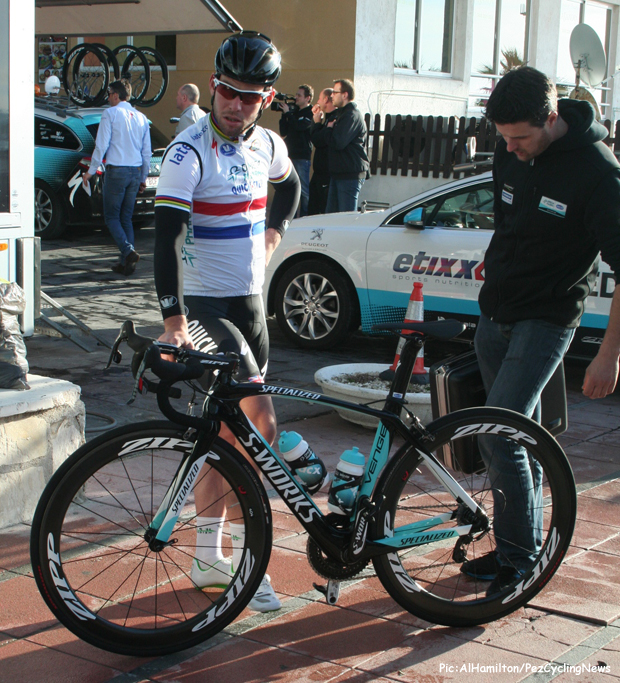 Whilst waiting for the off; Brian Holm arrived kitted up for a ride with a member of the management team of one of the sponsors. He said he wasn’t that fit, but he managed to ride all round the day’s route a matter of ten or twenty metres behind the team, just out of camera shot. Apart from when he was amongst the inevitable traffic jams, he would have been riding in the wind the whole time. As to training at home; there is only about 6 hours of semi daylight in Denmark in December. 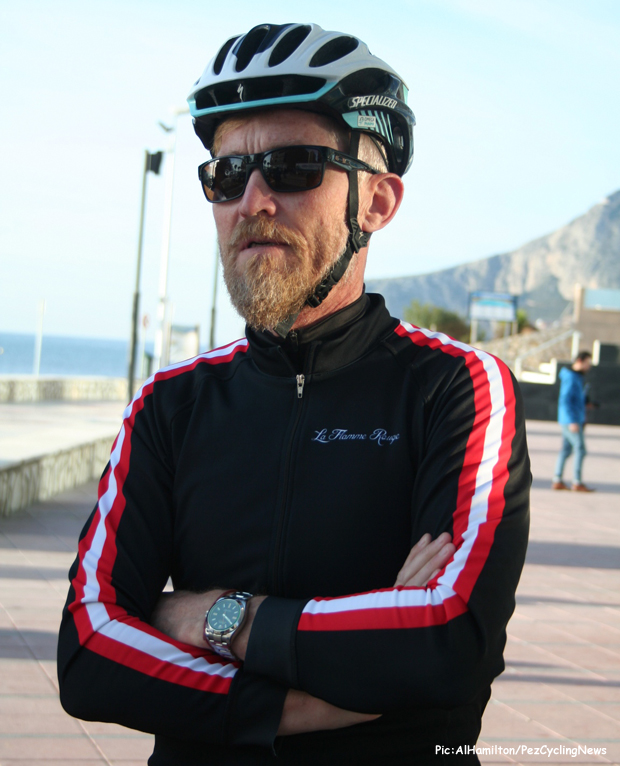 Not sure about the beard though!

As 10 O’clock came (and went) ‘AleJet’ was starting to get bored and soon began to use his mobile phone and then suddenly…we were off. There was a mad rush for the best seats in the two team cars, the two team people carriers and the two scooters with TV camera men. I jumped in with Rolf Aldag at the wheel as Alessandro was full with a crew from RAI, the Italian national TV station; my wish that Alessandra De Stefano was also with them came true later that day. 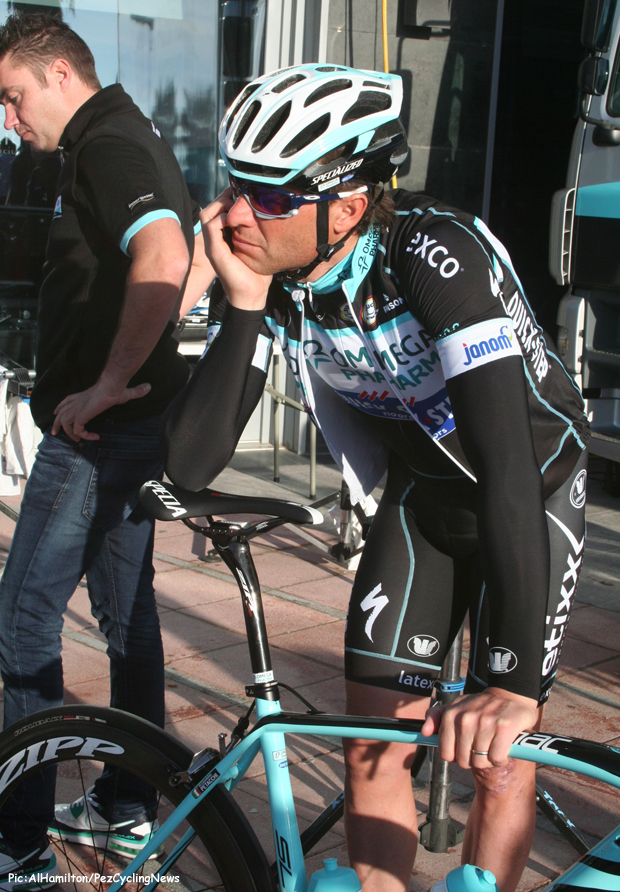 Are we going yet?

Out on the road the riders were taking it easy up the coast road before the climb inland – the cyclist’s were taking it easy, but not the drivers. The two team cars were driving ahead and behind the small peloton, as the two press vehicles and the TV scooters jumped ahead for photos and film, luckily many of the drivers in the area are either Belgian, Dutch or local Spaniards who are very used to the influx of professional teams in the winter months. Our driver; Rolf Aldag was unconcerned as he claimed he didn’t have a driving licence anyway, a joke…I hope. 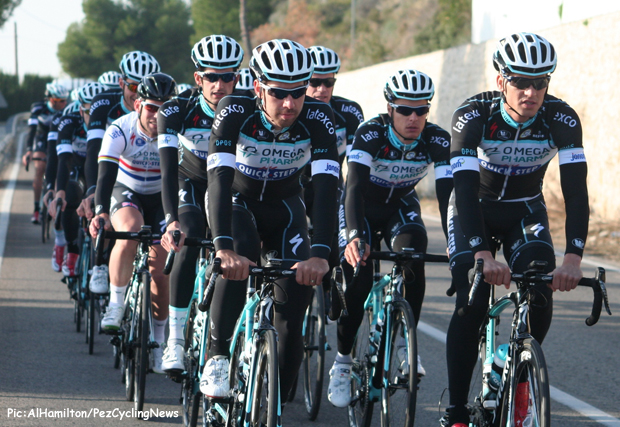 Up through the stiff climb from the beach resorts into the countryside the riders were taking it steady, it’s not a particularly hard or long ascent, but you do have to work at it. The continual bends gave ample photo opportunities and the chance to see if the rumours of Mark Cavendish carrying the odd extra pound were true. I can honestly say he looked pretty fit to me; he and Tom Boonen were chatting and laughing all the way up. 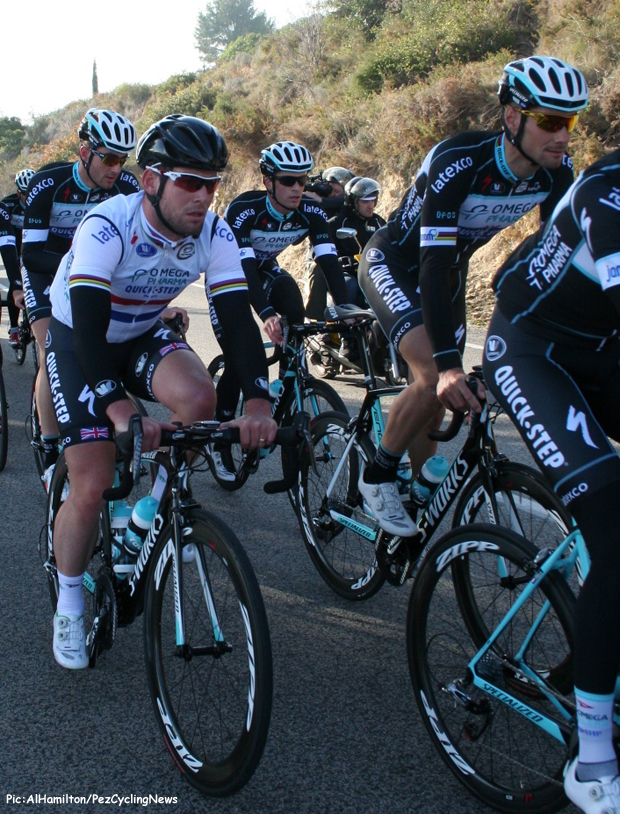 At the top it was time to swap TV crew’s and although it felt warm (in the car), riding a scooter with only a cameraman for warmth wasn’t ideal for a DS who is usually behind the steering wheel of a team car. Davide Bramati was taking it all in good humour, Wilfred Peeters on the other hand was not so happy and it looked as though his head had swollen inside his helmet, don’t know how they will get it off! 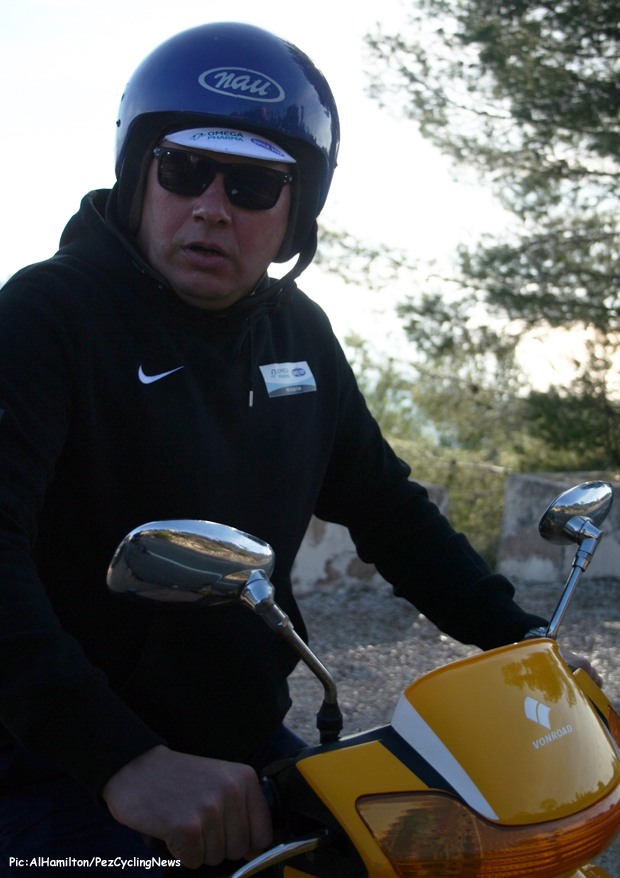 Down into the valley and the warm sunny weather began to change with a thick, cold fog rolling in from the mountain side. Cav might have been regretting leaving his leg warmers off, but he didn’t show it as he and World TT champion; Tony Martin tapped out a good pace round the vineyards of the Jalon Valley. 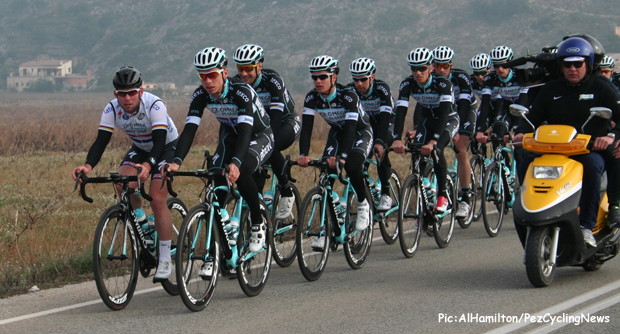 Riding out of the fog

As we turned back towards Calpe, the group shrunk as Boonen wanted to take in the local climb of the Coll de Rates for an extra loop of training; the others who will be riding the Tour de San Luis were obliged to go with him. Tommeke is keen for the 2014 season to kick off, for sure. 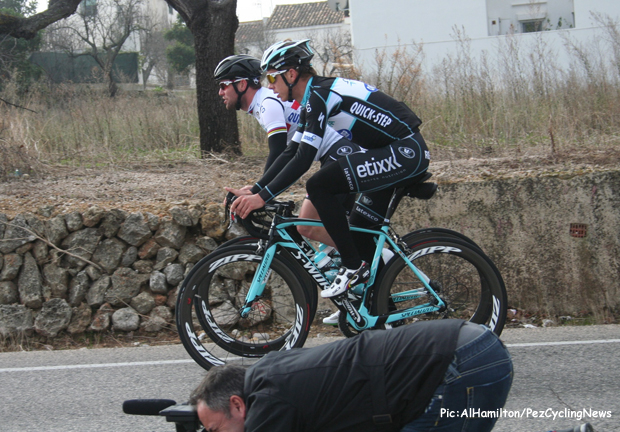 Smile for the camera

After we had made a stop for one of the TV guys to get some artistic shots, the photographer from the Spanish magazine Ciclismo a Fondo had a request, he needed photos of Tony Martin because they had an up and coming feature on the German speed machine. Of course the problem was that there was no way of telling him to move off the front of the group, except driving up to the front and shouting at him out the widow. Who said radios were not a good idea? So with some more smart driving, this time with a photographer hanging out the window, the job was done. 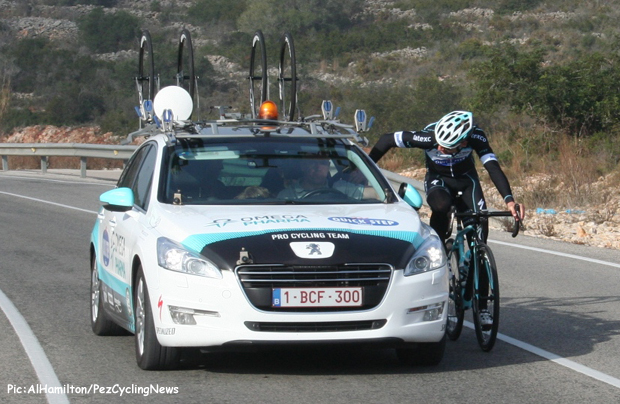 Tony Martin did his stint, but took it a little too far and ended up well off the front catching the lead car. As far as we were concerned the mornings work was over and it was time for coffee down in the seaside village of Moraira. A dozen photographers sat in the sun with their coffees made for a relaxing build up to lunch back at the hotel. As Alessandro pointed out “it doesn’t get much better than this.” 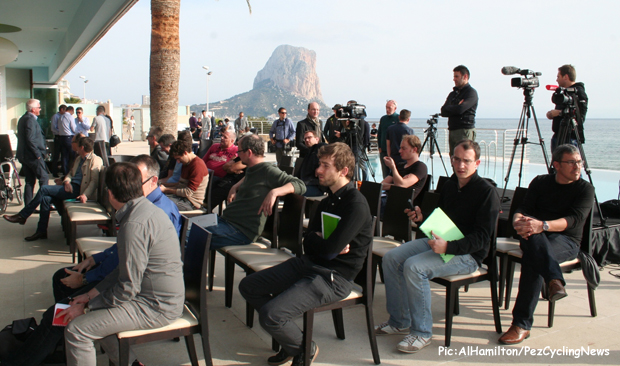 The combined international press was well fed and ready to hear from the main men of the Omega Pharma – Quick-Step team. Paul de Cock of Quick-Step, Patrick Lefevere team manager, Marc Coucke of Omega Pharma and Rolf Aldag sport and development manager were ready to tell us more about the sponsorship and the sporting elements of the team. First up; Patrick described the new riders on the team and the year gone and the year to come. 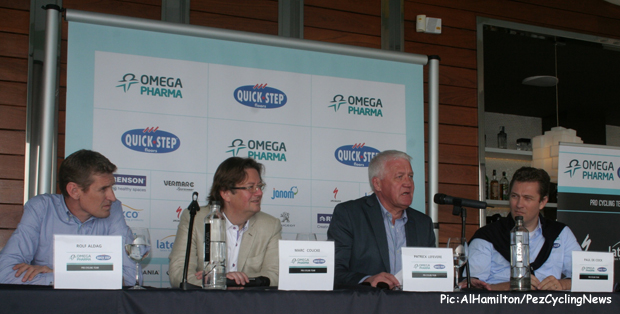 Marc Coucke of Omega Pharma ran through his company’s commitment to sport, not just professional cycling. They have a half marathon, own the football team KV Oostende and sponsor the Belgian bobsled team; the ‘Belgian Bullets’, add to that the Davitmon Classic bike ride which had over 8,000 riders competing over different distanced between 25 and 145 kilometres. Paul de Cock gave us the low-down on Quick-Step’s involvement in cycling and his company in general. Quick-Step is the biggest wood flooring company in the World with over 32,500 employees and a $7.2 billion turn over. Since 1999 with Mapei, Quick-Step has sponsored teams run by Patrick Lefevere and is also involved in the Bakala Academy to help established athletes and nurture young sportsmen and women. 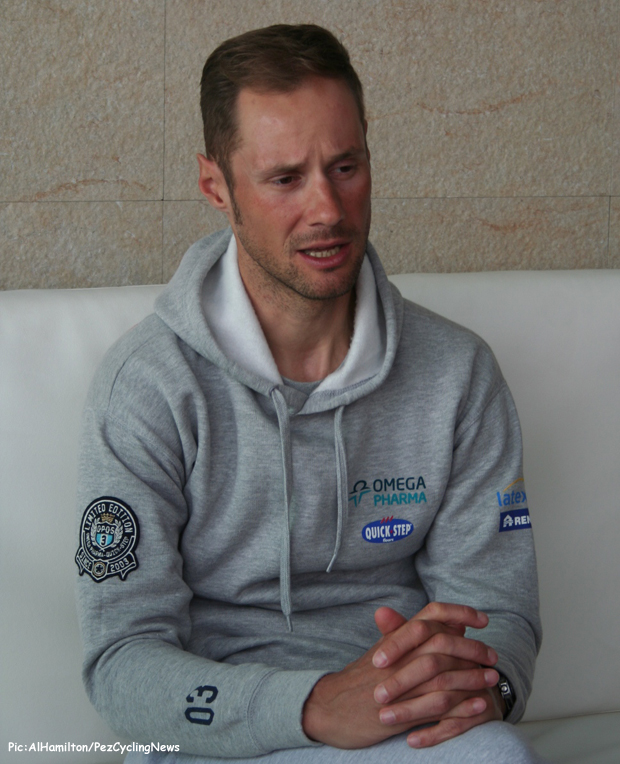 Time for the interviews, first was Tom Boonen, he always has a good answer and seems to enjoy talking to the press, first in Flemish and then in English. He described his less than successful 2013, due to injury and illness, but his enthusiasm for 2014 could not be hidden, look out Spartacus! 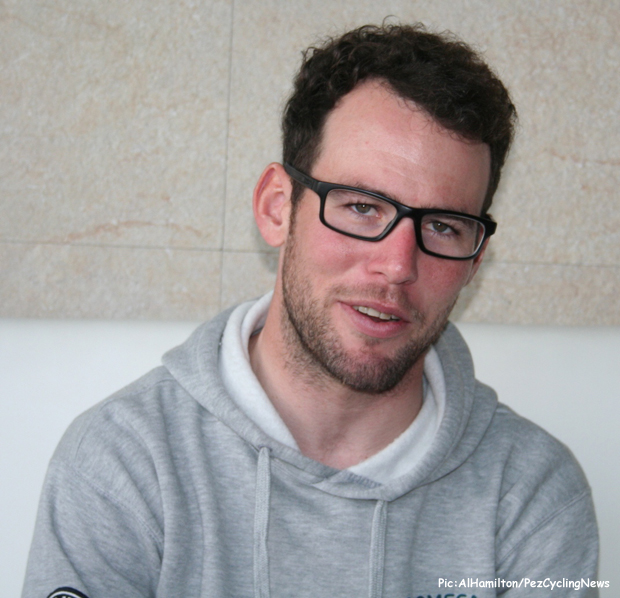 Mark Cavendish is not at ease in press conferences and to be honest you can’t blame him. It was fairly obvious he didn’t want to be there, but give him his due he answered all the questions, even the stupid ones. To finish off; Tony Martin gave us his thoughts on time trialling, the hour record and his plans for the future in his very precise manner. Interviews with all three coming soon to PEZ. 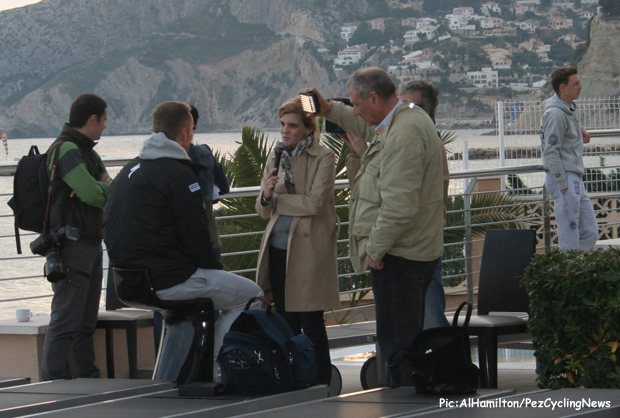 The bonus of the day was the very lovely Alessandra De Stefano was there for the RAI TV interviews, nice to see her in the flesh so to speak. Her Giro d’Itala programmes are the high point of the best cycling coverage on TV. Of course like an embarrassed school boy I didn’t have the courage to talk to her, maybe one day.

The OPQS team training, by CNN:

Thanks to Alessandro Tegner and all at the Omega Pharma – Quick-Step team for a great day.