What better way to get the cycling fan on your Holiday list something for the New Year than with PEZ Photographer Darrell Parks’ 2014 cycling calendar? This calendar features spectacular images from the AMGEN Tour of California, the rugged landscapes of Colorado from the USAPC, the Cross Worlds in Kentucky and more. Follow along as Darrell takes us through the stories behind a few of his selections…

It’s that time of year again. Time for the release of my yearly cycling calendar. I’ve combed through hundreds of my favorite images to get to the 16 that made the final cut. I’d like to share some of my thoughts on the image selection for this years calendar which is available at my website of course. 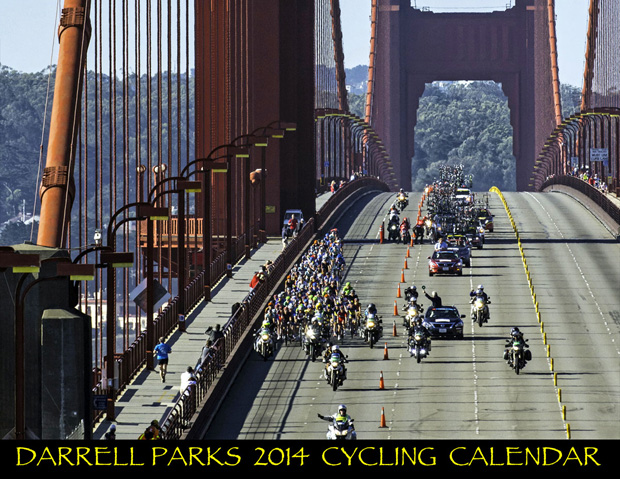 Choosing the cover image for the calendar is always a daunting task. I certainly have my favorite images from the season but sometimes those don’t always fit the format. I’ve always been partial to shooting cyclists on bridges so I kept coming back to Stage 8 of the AMGEN Tour of California. This stage just happened to start in San Francisco and took the riders and race caravan across the Golden Gate Bridge. It’s not often that they close that iconic bridge to automobile traffic so this was indeed a special stage. I decided to skip shooting the race start that day in order to get across the bridge early and stake out a prime location for the shot. People often ask me if I was somehow suspended over the road to gain my vantage point for this image. I’ve include a wide angle version to give you a better sense of where the picture was taken from. Picking the spot where highway 101 curves in front of the bridge and starts this gentle climb gives the illusion of shooting from mid air when zoomed in at a 450mm focal range! 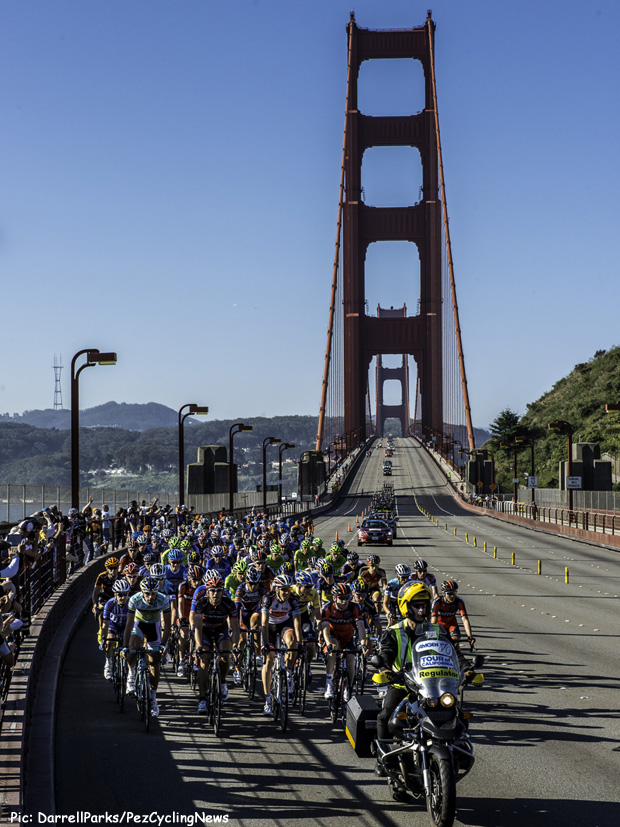 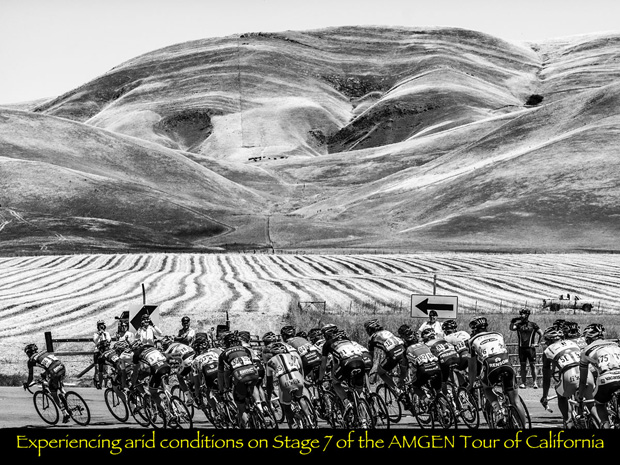 I like to include at least one black and white image in my calendar. This years choice was an image from stage 7 of the AMGEN Tour of California. I liked the image in color but it had several elements making it a perfect candidate to monochrome. First, it has all these contrasting tones from the meandering parallel lines of tilled dirt in the field. The muted colors of the sun baked earth and grasses added to the overall greyscale effect. Finally the sign with the large arrow was bright yellow and distracting in color. The lack of that bright contrasting color in the sign now keeps the viewers eye from gravitating towards it and keeps the focus on the rest of the image. 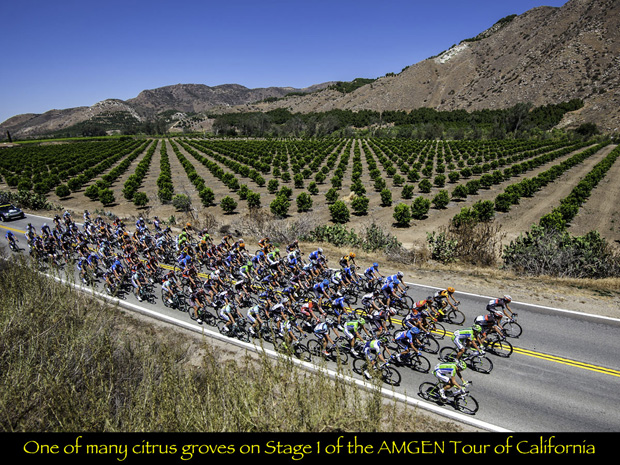 Stage 1 of the AMGEN Tour of California ran through the southern part of the state and its varying groves of fruit trees. I found this spot which gave me this great vantage point of a grove of young citrus trees. The rows of trees were lined up in such a way as to create an optical illusion from the abundance of diagonal lines. The sweltering Southern California temperatures had the peloton going at a fairly easy pace and taking up the entire road. Add to this the mountains in the background and one of my first scenic shots from the 2013 season turned out to be one of my favorites. 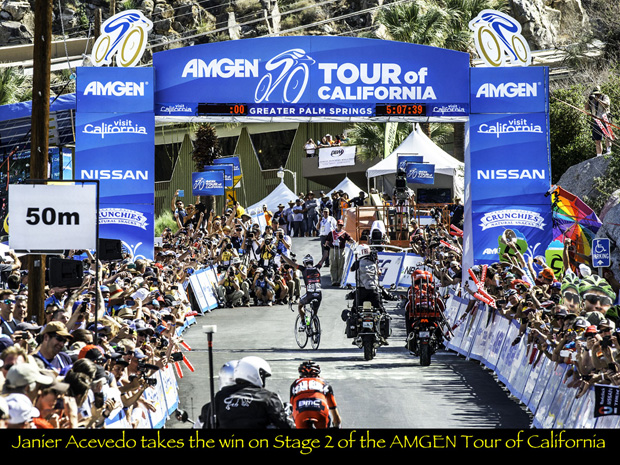 Stage 2 of the AMGEN Tour of California was a mountain top finish in the town of Palm Springs where oppressive desert heat continued to be a factor in the race. The final climb was on a steep and narrow pitch of blistering pavement with thousands of cycling fans jammed behind the barriers. Shooting positions from the standard finish line shot were already full when I arrived as evidenced by the small group of photographers in the image. Working with the media director I was able to secure a shooting position from under the TV camera stand located about 100 meters from the finish line. This from behind perspective reveals the excitement from the stage winner along with the fans at the end of a mountain top finish. Having the eventual overall race winner, Tejay van Garderen, coming into the bottom of the image helps as well. 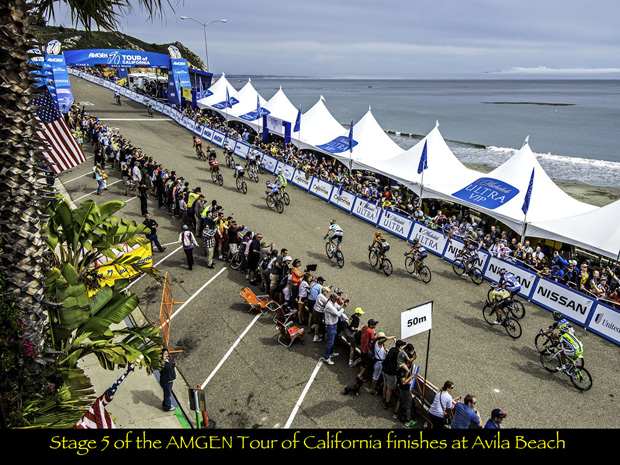 Stage 5 of the AMGEN tour of California finished right next to the beach in the little oceanside hamlet of Avila Beach. One again I wanted to skip the standard finish line shot and capture an image that showed off its proximity to the beautiful sand and waves. I looked up and immediately saw a building with a balcony that yielded a supreme vantage point. I recognized one of the people on the balcony as photographer Maria Nasif. I asked her if their was room for me up there and if she was willing to share her killer location. She said yes (Thanks Maria!) and directed me to the manager of the complex for access. This shot is also near and dear to my heart as my in-laws live just over the hill from Avila Beach. I have many fond memories of taking my kids here to play on the beach and swim in the ocean when visiting grandma and grandpa in See Canyon. 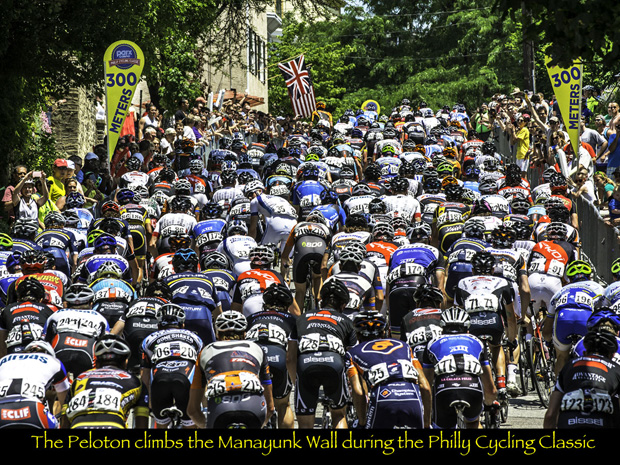 One of my favorite one day cycling events happens in Philadelphia and I once again made the trek up to Pennsylvania this year. The race has had trouble securing financing over the last few years but this year found a great new sponsor in the Parx Casino. This years event also featured a new format which did away with the circuits on the Ben Franklin parkway and moved the Start/Finish line to the top of the infamous Manayunk Wall. In years past I would always shoot the start on the Ben Franklin then wait for a shuttle to get me to the wall. This would result in missing the full peloton climb the wall on the first two or three laps as attrition and break aways typically reduced the size of the group by the third trip up the hill. The new format allowed me to shoot the start at the top of the wall and walk down the hill to my favorite vantage point. This allowed me to get the peloton in its entirety as it completely filled the road on its first ascent. 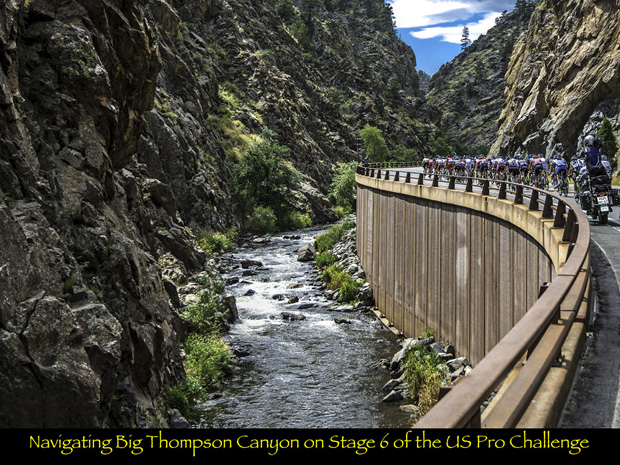 This years US Pro Challenge race in Colorado was one of the most scenic since its inception 4 years ago. I was fortunate enough to be on a photo motorcycle for several of these beautiful stages. Shooting from the moto allows you to take multiple scenic shots on a single stage by stopping to shoot a scene then leapfrogging the peloton to do it again. Unfortunately you sometimes get temporarily stuck behind the race and are not able to get back around the peloton to be able to shoot them again. If the roads are too narrow the commissars will not allow you to pass for fear of endangering the riders. However I was able to make the most of that situation in this image shot in Big Thompson Canyon. While stuck behind the peloton I was able to capture this image of the peloton. Though the cyclists aren’t prominent in the image you still notice them as the guard rail guides your eye right into them. 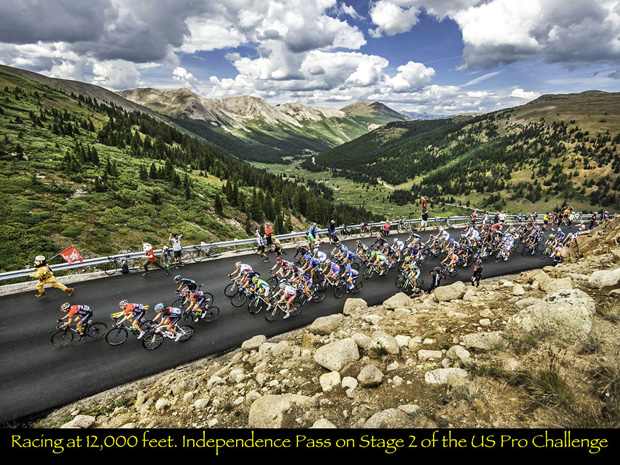 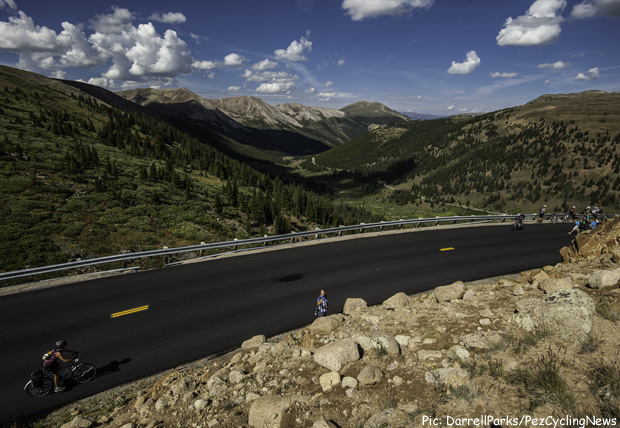 And then there are the days when a moto isn’t available and you have to drive your vehicle to a spot on the route to shoot from. On these days you may only have enough time to drive to and shoot the race at one or two spots along the course. These are the days when a remote control camera setup allows a totally different set of images from a single location. I can shoot a scenic from a hillside in one location, while I’m shooting individual rider shots from another. This is an image of the peloton just before getting to the KOM on Independence pass. The second image shows a picture of me as I’m testing the functionality of the remote that the image was taken with. These two images also show the dramatic difference lighting can make in an image. It was sunny when the test image was shot, but the actual Peloton image reveals the dramatic difference when the clouds are obscured by the sun. 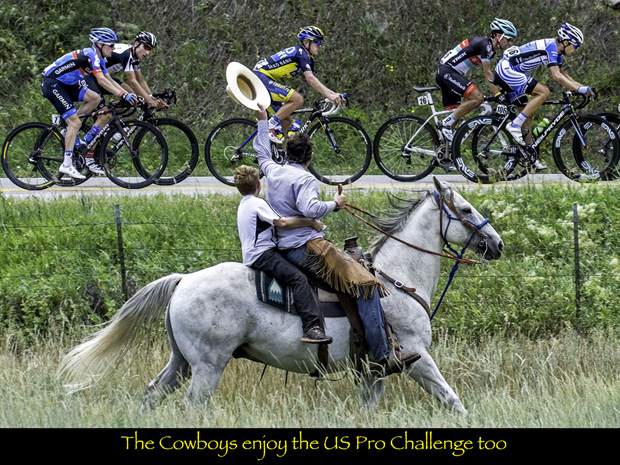 What kind of bike race would the USA Pro Cycling Challenge be without the token horse photo? As abundant as cowboys are in Colorado it’s not as easy to capture this image as it might seem. Since we had just passed the peloton when we came across these two riders on the horse, we didn’t have much time to stop and allow me to get out into the field and set up the shot. To capture this one my moto driver had to quickly drive us into the field to gain the proper positioning. Then I needed to judge where the horse would be in respect to the riders as they’d both be moving along the road simultaneously. This one worked out fine but when the Peloton came along I ended up being in the wrong place to make the image work. This is one of my favorite images from the 2013 season as it also features Timmy Duggan who retired from cycling this year. 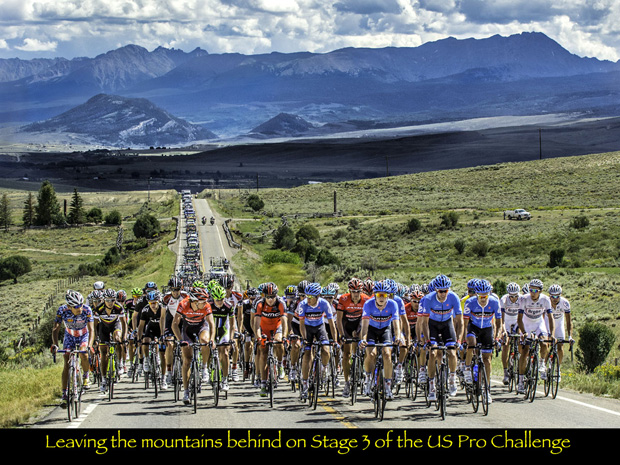 And here’s a parting shot from Colorado on Stage 3 of the USA Pro Challenge. This shot was taken from the motorcycle. The angle and image would have been just about impossible any other way. 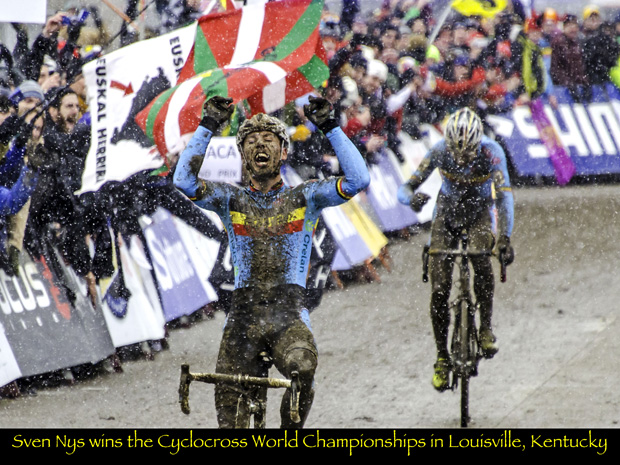 This years US Cyclocross season may be winding down but I can’t tell you how excited I was to be able to shoot the Cyclocross World Championships this year. Having that spectacle in the united states doesn’t occur too often. The day’s racing at Eva Boardman Park in Louisville, Kentucky certainly didn’t disappoint. The conditions were epic with snow on the ground and in the air during the men’s final. I usually try and stick to my scenic work for the calendar images but this shot had too many visuals to leave it out of the running. Snow, mud, and an elated Sven Nys taking the win over a visually distraught Klaas Vantornout made for one of my favorite finish shots of all time.

Be sure to visit https://www.darrellparks.com/Calendar.html to order your Darrell Parks 2014 Cycling Calendar today!