The Photog’s View: Tour of the Battenkill 2012

The Tour of the Battenkill UCI 1.2 Pro Invitational Cycling Race is loosely modeled after the European Spring classics – two laps of a 62 mile circuit mixing hilly pavement and dirt roads near Cambridge, New York. Its 10 dirt road passages are strewn with fist sized rocks and it’s arguably America’s toughest one day bike race. I look forward to shooting it every year…

– Words and Images by Darrell Parks –

From the beauty of its covered bridges to the athletes suffering on its lumpy parcours, there’s no other bike race in America quite like the Battenkill. 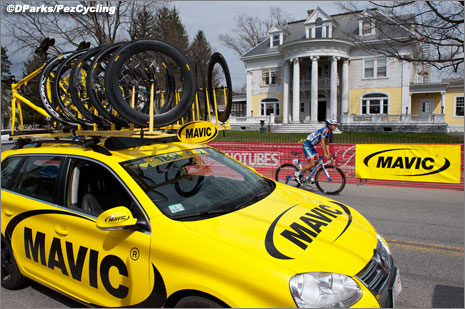 Mavics Neutral Support Stationed near the Start in front of the Rice Mansion Inn.

Shooting the race is always a challenge and this year was no exception. I somehow once again missed out on the Photographers Motorcycle pool. My email inquiries into Photo moto access were met with no response. I contacted my friend, long time Cambridge local and proprietor of the Rice Mansion Inn, Christine Hoffer, to see if she could provide some insight. She put me in touch with one of the moto marshals who informed me that they had even less moto coverage this year and selections for moto photographers had been made months ago! Once again I would have to shuttle myself around the course on unfamiliar roads. When Christine heard the news she offered up her husband, Geoff, to shuttle me around the course! That would certainly make things a little easier! 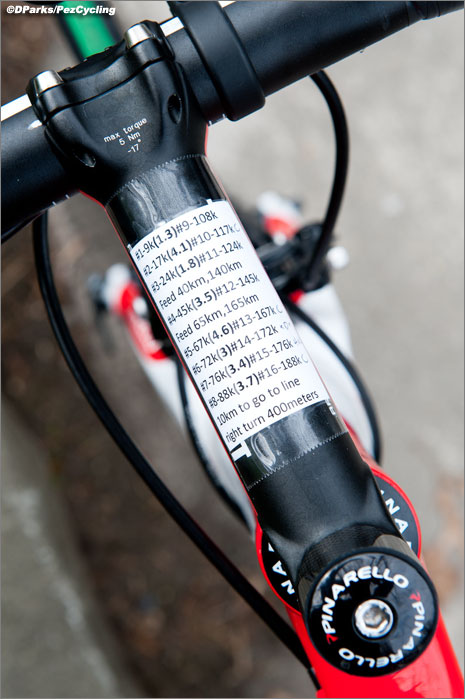 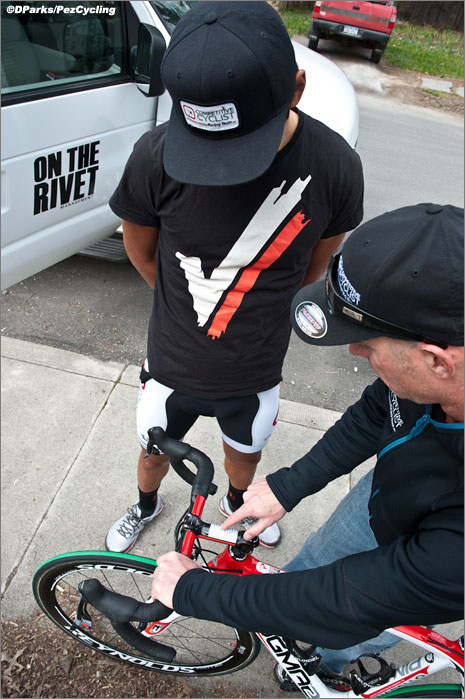 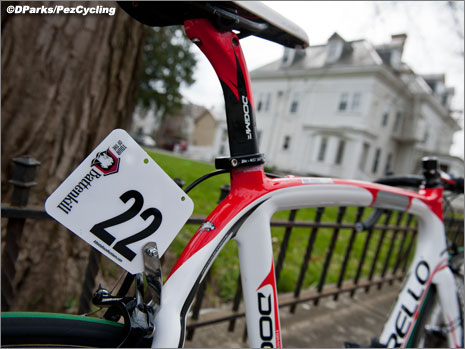 I arrived in town about 2 hours before the race and found the teams starting to show up then as well. Competitive Cyclist was setting up just outside the Rice Mansion Inn. They brought a powerhouse team including Francesco Mancebo and Cesar Grajales and were obviously gunning for a victory. Their Competitive Cyclist Pinarello Dogma2’s had “Cue Sheets”, listing the dirt sections, taped to the stems. DS Gord Fraser was taking this race very seriously as he was reviewing the details of the Cue Sheets with his riders! 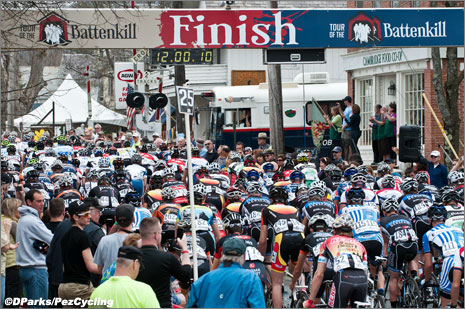 This years Pro race consisted of 28 teams of six riders for a huge field of over 160 cyclists. Pretty much every US continental team was represented here as well as many Canadian teams. The previous day they had over 3000 cyclist compete on the Pro/Am races. This Race becomes more popular every year. 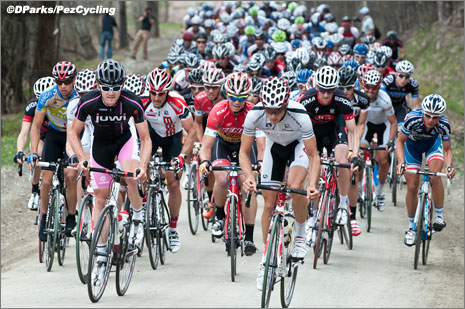 The field is all together the first time up Juniper Swamp Road.

The first landmark of the race, The Eagleville covered bridge, shows up about 5 miles from the start. Geoff assures me he knows a back way that will get us to the bridge well before the race arrives. We watch the race leave town and jump in the the car. We’re joined by Geoff’s 14 year old son Matt who I’ve learned is a bit of a shutter bug. I give him my spare camera and let him know I’ll be putting him to work. Geoff is driving at a leisurely pace, about 1/2 as fast as I normally drive when shooting a race from the car. As we come around the last turn before the bridge we just catch the rear of the peloton exiting the bridge. Not off to a great start! Fortunately we’ll have another chance to shoot it on the second lap. We head off to catch them as they climb Juniper Swamp road. Geoff is very apologetic and puts his foot into it this time! We won’t miss any of our destinations from here on out. 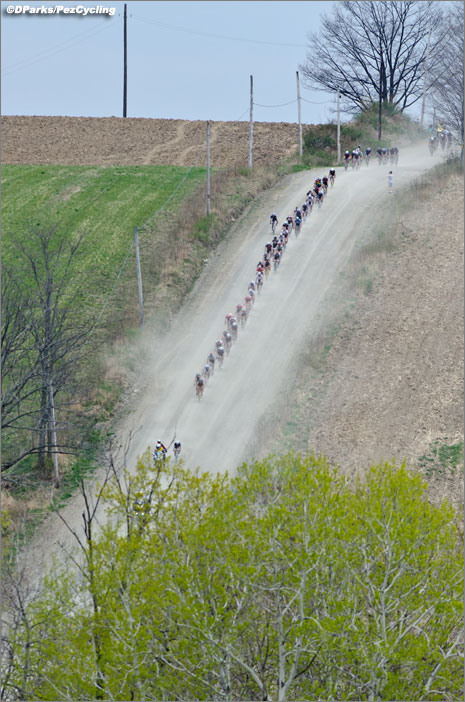 The field gets strung out on its first time descending Meeting House Road. 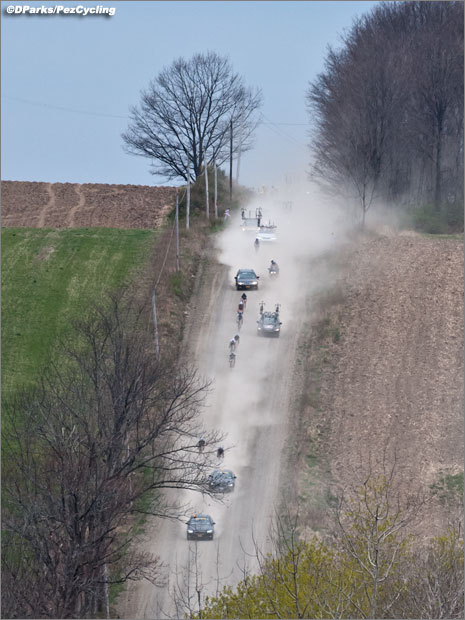 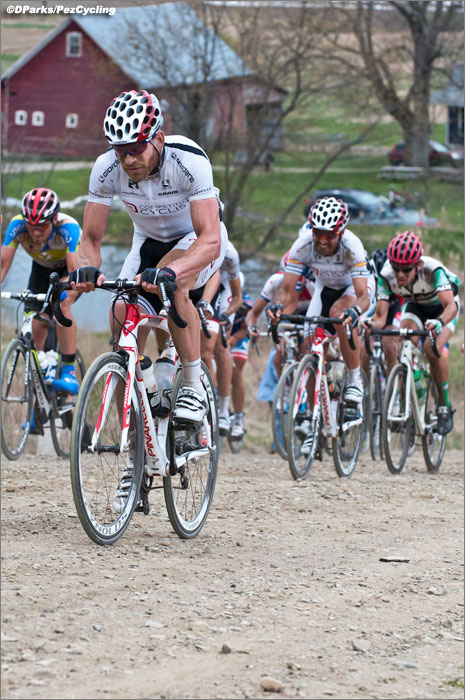 Mancebo has teammates on the First ascent of Meeting House road climb. 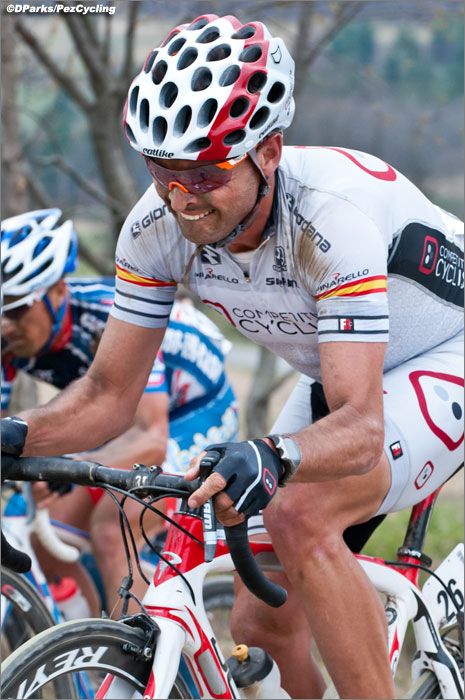 Dust. That’s what this years version of the Tour of the Battenkill was all about. No rain for 2 weeks straight made for some low visibility conditions on the 10 sections of dirt roads the race would travel. The race may be named for the local Battenkill River but there was no water to be found out on course. Some of the moto photographers were complaining that all the dust was not allowing them to get the shots they wanted. If they were caught anywhere in the race caravan the cars would stir up so much dust they could not see 3 feet in front of them! They were beginning to look worse than the cyclists! Maybe missing out on the photo moto wasn’t such a bad thing after all… 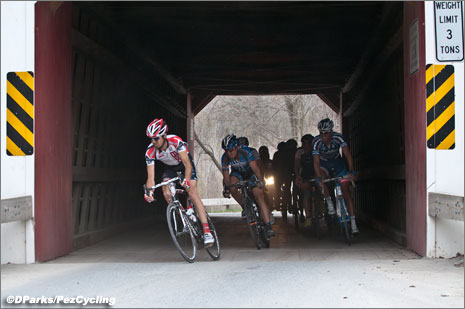 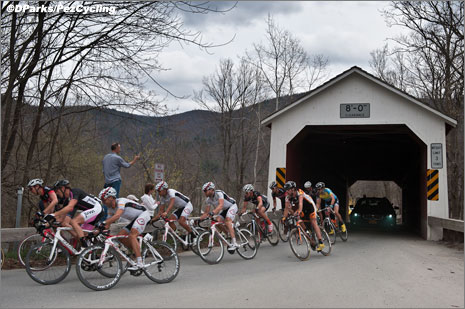 Mancebo still has support the second time through the Eagleville Covered bridge.

So we finish up at Meeting House, dust ourselves off, and head straight back to the Bridge. We don’t want to chance missing a bridge shot on the final time through. We get there in just enough time to get out and catch the small break going through the covered bridge. They don’t have much of a lead and the peloton comes storming through just seconds later. After shooting at the bridge for a total of no more than 2 minutes we’re back in the car and racing back to Juniper Swamp. 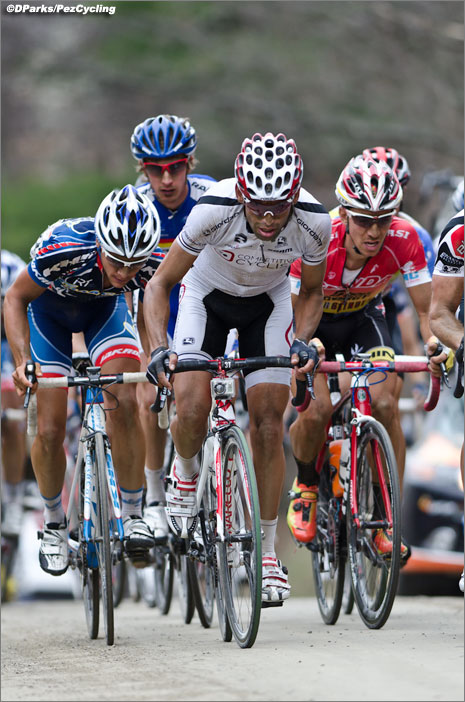 Cesar Grajales on the front for the second ascent of Juniper Swamp Road – this is a Matt Hoffer shot – sorry for the wrong label!

Once at Juniper Swamp I throw the 300mm, 2.8 Telephoto on the D7000. It’s set for shutter speed priority and I crank up the shutter speed and ISO and hand it to Matt. I tell him to “Be steady and pick off the riders as they crest the hill”. He gives me a look of disbelief as I head down the road to grab some scenic shots. The group is still together at Juniper only there numbers are dwindling. Geoff has been studying the map and thinks we can get to another spot before heading back to Meeting House for the last time. We decide to go for it! 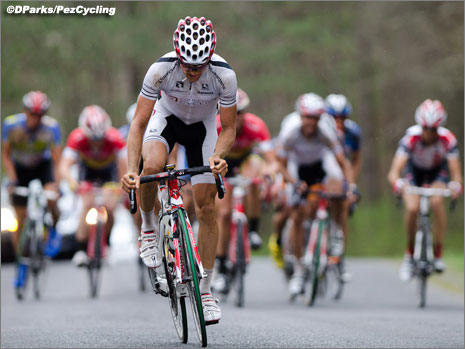 Competitive Cyclist attacks in the rain on a steep paved ascent. 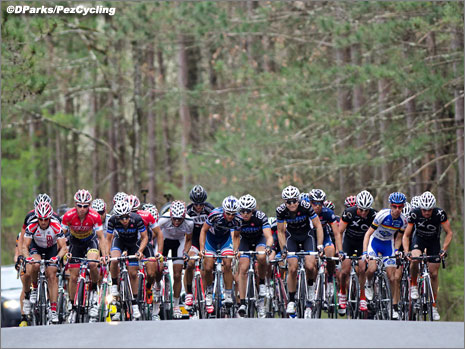 The peloton chases the leaders over the climb.

We get to a very steep paved road and go over the top. We’re not too sure of the location and head down the road looking for photo opportunities. After a couple of minutes we decide the top of the climb was the best spot and we make a U turn. When we get back to the top of the hill it’s raining. No rain for 2 weeks, I’m here with all my camera gear, and it starts to rain! At least it’s only a sprinkle so we tuff it out. As the riders come into view It looks like we finally have a selection. About ten of the favorites are on their own and one of the Competitive riders is attacking near the top. They’ve got a gap on the peloton as the rest come through about a minute later. Time to pack up and head for the showdown on Meeting House Road. 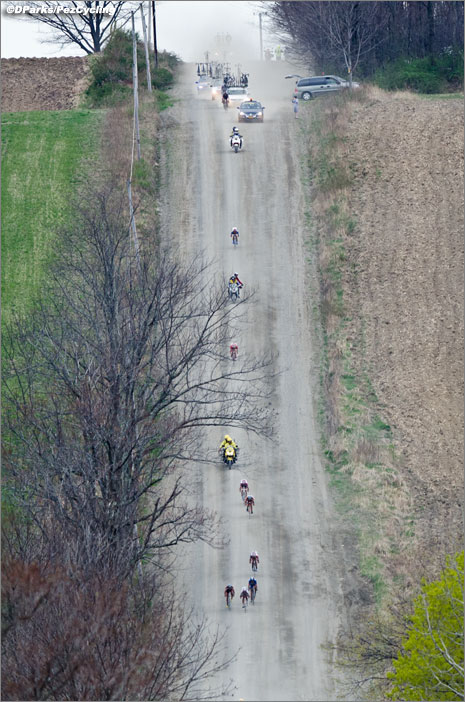 The Favorites risk it all flying over the rocks on Meeting House road. 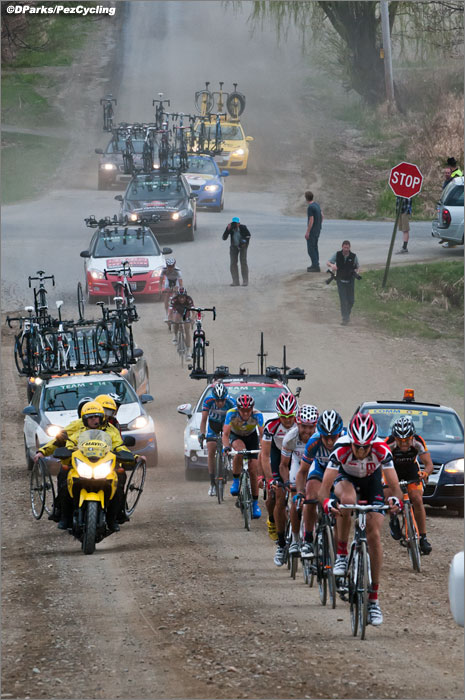 All together at the base of the climb. 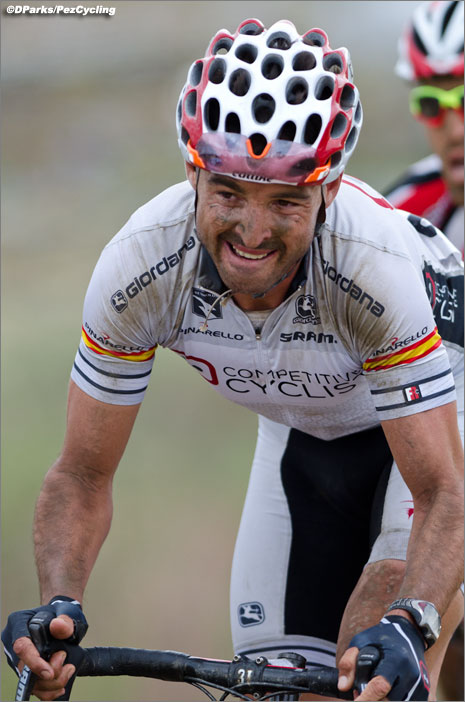 Mancebo shows his trademark tilt of the head. 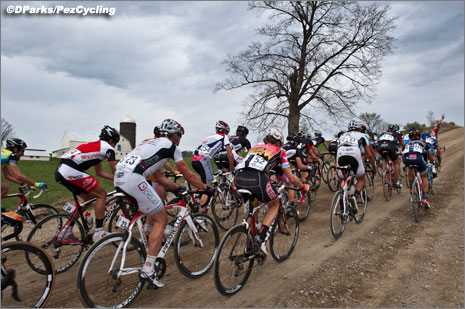 The domestiques slog their way up the hill one last time.

Back at meeting house road the big guns are letting it all hang out as they bomb down through the dust clouds created by the cars and motos. It’s down to seven hard men as they hit the base of the climb trying to avoid the potato sized rocks in the poor excuse for a road they’re riding on. Minutes later the rest of the bunch come through struggling just to get up the hill. Their job of chaperoning their leaders is done and they just need to find enough courage to get to the finish. Waiting for the stragglers to come through may have been a bad idea as we’re now running short on time to make it to the finish. 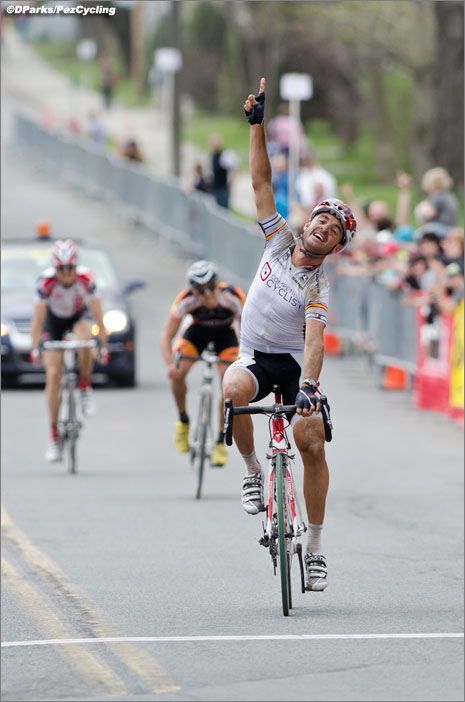 Geoff puts the hammer down and gets us into town rather quickly. Now we just need to get around traffic and road blocks. Fortunately Geoff is practically Mayor of Cambridge and knows most of the local police who kindly wave us through. I load up the elephant gun (300mm, 2.8) and take up a position near the back. I send Matt up close with a more reasonable lens and we wait. But only for about 30 seconds as we see the select three come into view on the finishing stretch. Mancebo drops the hammer and takes down Jesse Anthony and Jeremy Vennell. 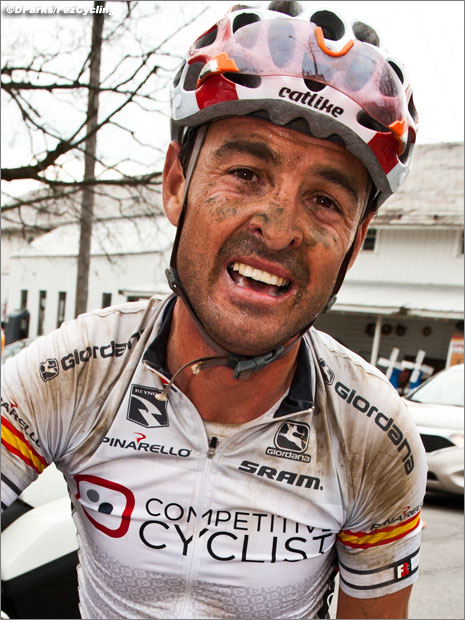 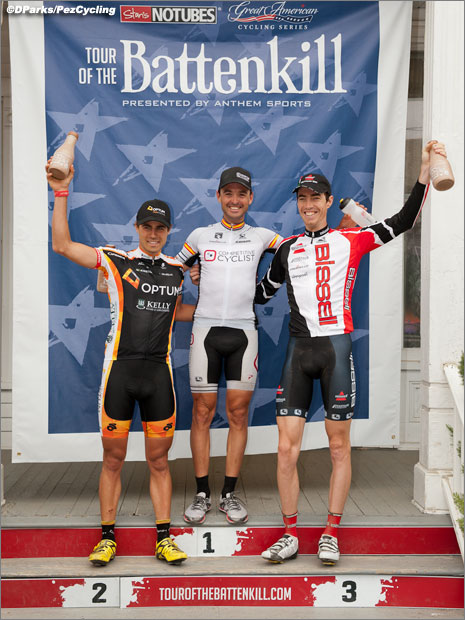 Your 2012 Tour of the Battenkill Chocolate Milk Podium.

Congratulations to Francisco Mancebo Perez, also known as Paco Mancebo, and sometimes referred to as Kiko Gambas Mancebo! I’d also like to thank the Hoffer clan (Christine, Geoff, and Matt) for all the help with logistics, photography assistance, Pizza, etc. You’re a first class outfit all the way! And you never know who you’ll run into while at the Rice Mansion Inn…Nice chatting with you again Greg! 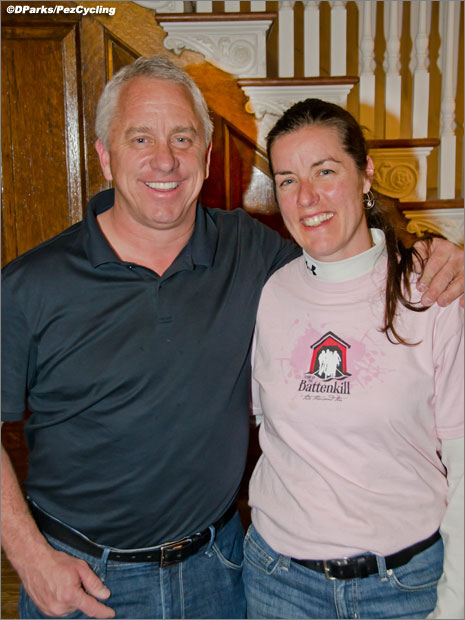