Ex-World champion, twice Tour points winner, Vuelta points winner, multi-National champion and Classics specialist; Thor Hushovd has had a long and successful career. Even though he had a slight hiatus in 2012 his winning ways have not left him – So what is the future for the man from Norway? We find out what the big man’s plans are for 2014.

Thor Hushovd suffered from a tricky virus that took him away from his winning ways for most of the 2012 season but last year some of his old form returned with the overall win in the Arctic Race of Norway, with two stages and the point’s jersey, plus stages in the Tours of Austria, Beijing and Pologne. He also won the Norwegian road championships and was second in the time trial the ‘God of Thunder’ seems to have recovered and the winning ways are on the way back.

PEZ: So how is your health now?
Thor Hushovd: I’ve recovered after some up’s and down’s and I expect more from this year than last year. The Classics are now my aim for this year and I feel 100%.

PEZ: Do you have any new targets for this year?
Thor: You know, I would like to be ready from the beginning, try to be in the races, just take every race as an opportunity. The main goals are the Classics, like every year. I want to see how my form starts, if I can win a nice race at the beginning of the year, its good because it’s better to take what you can than try to go all in for Roubaix and then I miss out there. If there is an opportunity I’ll take it. If you win Het Nieuwsblad, it’s not the biggest win, but it’s a really nice win, but if I can win that race, yes I would take my chance. Also if I can win a stage in the Tour of Dubai, it’s a win. 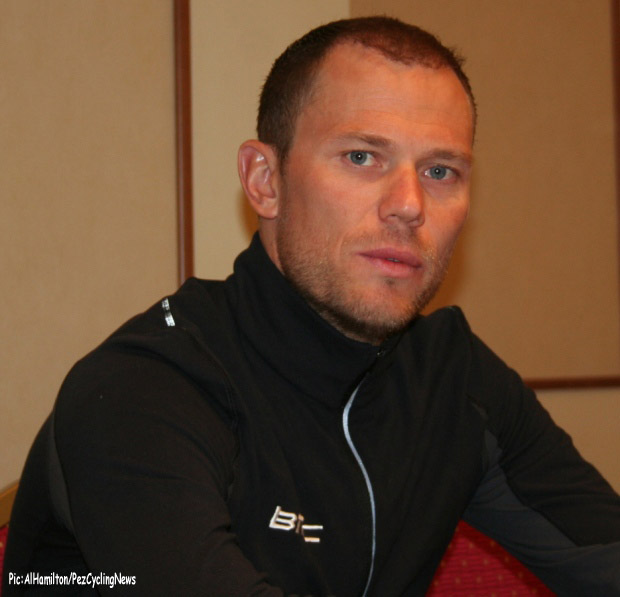 Ready to take his chance.

PEZ: Is it a change in attitude that you want to be ready early?
Thor: Yeah I think I changed when I was sick, when I was forced out for almost a year, then I saw that you can’t take anything for granted. Suddenly if something happened and you couldn’t race anymore, so you just have to take the chances.

PEZ: So you did a lot of thinking last year?
Thor: No, it was the year before. But of course you make your opinion and you have time to think and when you suffer on the bike and you don’t know the reason, you have time to make some options or thoughts.

PEZ: Is it a new Thor Hushovd?
Thor: No, I thought like this last year too, you know. I got a few wins in small races which I won by sometimes just small gaps and that was a big hunger to win that I got that back; to try to win every race possible, when I saw I had a chance; I wanted to win. 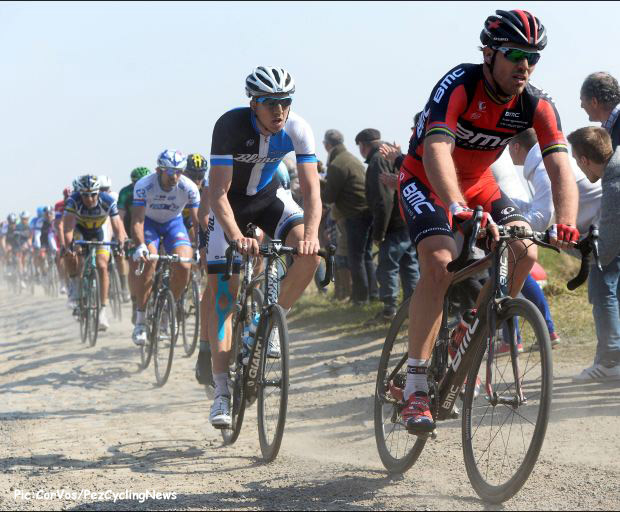 A happy man on the cobbles.

PEZ: Do you think it’s a bad thing that they have changed the race?
Thor: Yeah I think so; there are not many ProTour races or WorldTour races that you can win as a sprinter. So I think it’s sad that they changed this and also with the long history it had.

PEZ: What about the changes in the Giro and Vuelta, all the stages are so hard these days with steep climbs.
Thor: Yeah, it’s like they want just climbers to win bike races these days.

PEZ: Someone like Mark Cavendish now looks at Milan-Sanremo and says he won’t ride and looks at the Vuelta a España and says there are not enough possible stages for him, is that bad for cycling in general?
Thor: I think if you look at a flat stage of the Vuelta and two or three guys go up the road and they get eight minutes and then the peloton start to ride to close the gap and bring the group back so it’s a bunch sprint, it’s not that interesting to watch on TV, but still I think you need a good mix of everything.

PEZ: Are the changes a bad step?
Thor: I don’t know, but I wouldn’t say that, still you should have a mix of everything. Often when you look at the profile everyone says it’s hard, it’s hard and there will only be two bunch sprints, but when the race is over there have been five or six of them. It’s the same with the Worlds, every year they say; it’s hard, it’s hard, come to July it’s not that hard and by August it’s for sprinters. It changes a lot how people talk about things.

PEZ: Will you ride the Tour de France this year?
Thor: Yeah, I’m on the long list.

PEZ: You won the stage to Arenberg (Porte du Hainaut) in the 2010 Tour de France on the cobbles, would you like to repeat that this year?
Thor: Yeah absolutely, I would love to go there and try to copy that win, so that’s a goal for the season.

PEZ: How important is that stage from Ypres to Arenberg for you?
Thor: Yeah it’s important, I have a fan club there, so it’s something special and I’ve been there to Ypres and I rode with them as a tourist. There are a few guys who have written their name on it [the cobbled tour stage] and I guess I’m one of them, so yeah I want to go there and win the stage and help the team to come out of it the way we want to on GC.

Thor wins on the cobbles in the 2010 Tour de France.

PEZ: How important to you is riding the Tour de France this year after not riding it for two years?
Thor: You know I’ve done the Tour that many times, I think I did 11 years in a row, so when you have done something many time, not that you’re not tired of it, but you look forward to the year you don’t race. I didn’t want to be out, but when it happened I tried to look at it from the positive side. But also it’s still the biggest race in the World and I think I still have something to do there for myself and also to support Tejay [van Garderen] for the GC, so yeah I would like to come back and race that race.

PEZ: Was the high point of you season being able to race again?
Thor: Yeah, you know when I started to feel good at every bike race I did, when I was feeling good every day that was a big step in the right direction and that I could win a lot of bike races again. 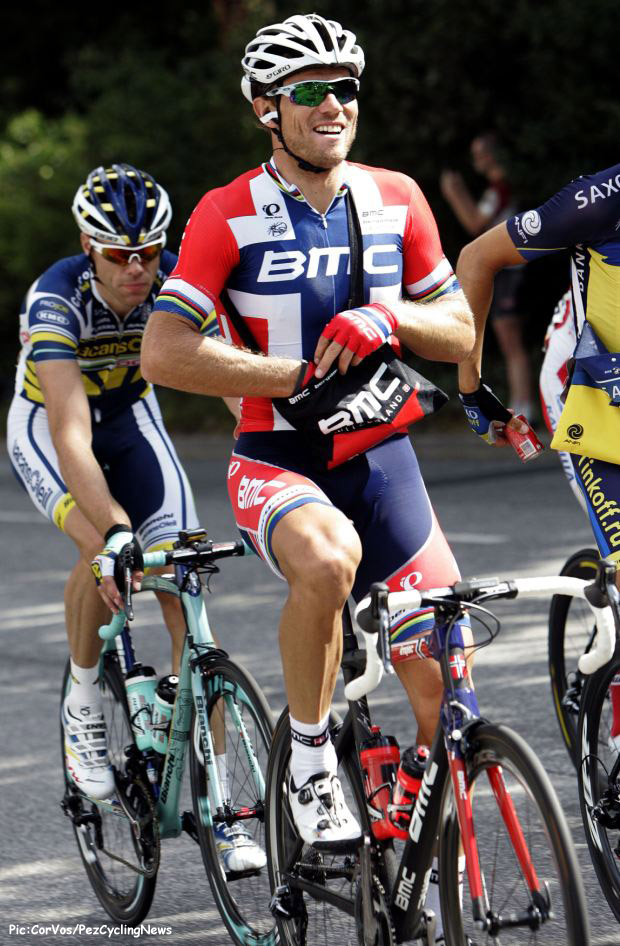 2013 was not Thor’s best season, but he still won the Norwegian National championships.

PEZ: You go to Dubai, what about after that?
Thor: The Tour of the Mediterranean, and I do Haut Var, Het Nieuwsblad, Paris-Nice and then all the Belgian Classics. The one I don’t do is De Panne, but I do Waregem, E3 and Gent-Wevelgem. Yeah this year I’m going to do all three of them.

PEZ: Is it a problem for you that Greg van Avermaet is having more ambition in the races that you prefer?
Thor: Yeah that’s no problem. Greg is such a strong rider I’m sure he’s going to be there like he was last year, in the front in all of them and we are going to have to race smart as a team and its better for all of us.

PEZ: How many more years do you think you will race for?
Thor: I don’t know. We’ll see how it goes this year. Yeah I love riding my bike as long as the health is there and the form is there. You know, if I have a good season this year, then maybe a couple more seasons.

PEZ: How do you stay motivated?
Thor: Its easy, I think as you get older you appreciate different things and I appreciate time on the bike and just riding my bike and being outside and stuff like this. Other things are harder of course, and then just being a part of winning, that’s what I have deep in my head. I love to win bike races and to have goals and achieve them and that’s a big part of it.

PEZ: So on a wet cold, rainy day; you know you have to go training.
Thor: Yeah I do, but I’m not saying it’s getting any easier. Days like those makes it harder, but on a sunny day it’s easier than it was five years ago.

PEZ: Is the possibility of the Worlds being in Norway in 2017 something you can aim for?
Thor: It’s a long way, I will be 39 that year and I don’t plan to go that far. So maybe I’ll be there as one of the public.

PEZ: Philippe Gilbert has said this has been his best winter, what has been your impression when you have seen him training?
Thor: I see him always in restaurants and stuff and I don’t think he is really fit! No, he’s really motivated, I’ve never seen him as hungry as he is this year, so I think he will pull out some nice victories.

PEZ: Any regrets in your career, is there anything you wish you had done?
Thor: I think if I don’t have regrets after 15 years it’s been too easy. Of course, I achieved a lot of things, I would never expect to have won so many races and done what I’ve done, so overall I’m really pleased with what I have done.

The first time I interviewed Thor Hushovd a couple of years ago, I found him a little intimidating. Maybe he has softened or I’ve got used to his penetrating stare, but for sure he still has the ‘Eye of the Tiger’ and the look of a winner, so it won’t be long before we see his name at the top of the result sheets. 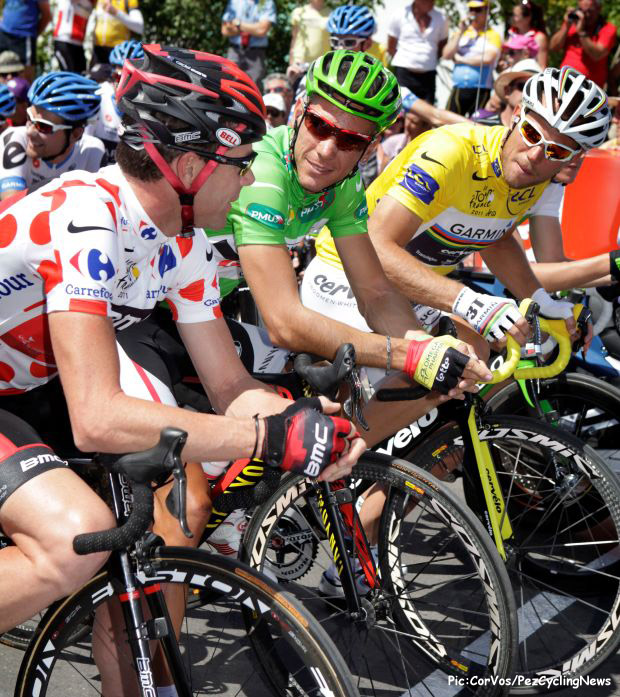 The three Musketeers before they were all for one!