My recent article on “cramming training load” sure seemed to have struck a chord with Pez readers. This week we will follow up on some of the questions I’ve received following the article, along with expanding on the whole idea of block training.

“How Hard Should I be Riding?”
I received a number of questions along this general theme. These questions involve requesting some more specifics about how hard we should be riding, how long the recovery periods should be, whether to aim for a target wattage at particular percentages of FTP, etc.

Within the particular Ronnestad et al. (2014) study, the prescribed hard effort intensity for the 5×6 or 6×5 intervals appear to be as high an average wattage as they could sustain, as long as they could complete each entire interval. So if you’re doing 6×5, don’t go out so hard that you blow up at 3 min. The goal is to get 30 min of overall hard work in. 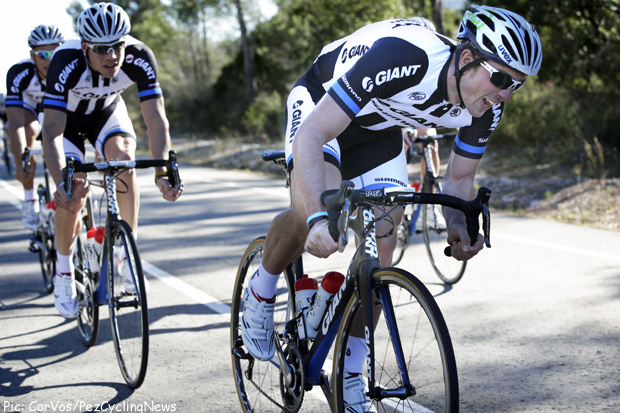 Team Giant-Shimano certainly got the hard work in during their training camp in January this year with a series of repeated sprint drills at maximum effort.

Indeed, one of their key performance measurements was whether the average wattages during the interval workouts changed in the two groups.

Training traditionally (TRAD: 2 hard efforts each week over 4 weeks), no differences were reported in the average interval wattages. However, the block training (BP: 5 hard efforts in week 1, then 1 hard effort each over the next three weeks) produced 7% higher average interval wattages over the final week compared to the first workout. This was above and beyond their other findings about VO2peak, power at lactate threshold, etc.

Summary
The answer to all of these questions, as with anything concerning designing training plans, is the classic and eternally unsatisfying “It depends.”

The question that is being asked by Ronnestad et al. (2014) is the spacing of workouts, NOT whether these particular intervals are the ideal workouts.

So the concept you should take away is not simply to replicate these workouts (although the do seem quite effective), but whether it’s better to cram intensity into one brief block, and then recover equally intensively. Based on the results, I would suggest that the cramming seems to be much more effective than spreading out the training stress evenly.

Basic Training Principle – Overload
This study is really about the basic training concept of overload. Namely, to get beyond your current level of fitness, you really need to push yourself well above your current fitness, then allow your body to recuperate and “super-compensate” by making itself stronger.

So the TRAD group, like many of us, become used to the weekly routine of a couple of hard days and then some easier days. So just doing more of the same routine isn’t going to provide enough training stimulus to force our body to adapt and super-compensate. Have an honest look through your training diary, and most of us probably fall into this trap by early spring. We may pay lip service to periodization and really building up intensity and volume over the course of several weeks, then taking an easy week to recover.

But in reality, most of our main summer riding weeks are pretty much identical. For example, I like to do our Tuesday club race, then our Saturday and Sunday hard club rides. Each week is pretty much the same, so while we might get a bit stronger just by doing it, we’re probably adapted to this level of stress by May and our fitness plateaus over the rest of the summer.

In comparison, the BP group requires much more discipline. Discipline not just to go do the same club rides every week. Discipline to do extra work or hard efforts on top of these club rides you may already be doing. And then the discipline to skip the fun group rides and decrease volume or intensity for several weeks while the sun is shining and warm.

But as Ronnestad et al. (2014) suggests, that’s exactly what’s needed to go take your fitness to a new level. You need to shock it by going harder than maybe even you thought possible. Then it takes you figuratively kicking back, saying no to your buddies wanting to ride or hammer, in order to optimally recover.

How you shock your body depends on what your goals are and what you need. Maybe it’s sprinting. Or maybe it’s climbing. Figure that out and then push yourself beyond your current limits. This may be the amount of climbing, or it may be climbing intervals at higher than your normal speeds.

Summary
Just like riding every ride at the same speed, riding the same weekly schedule is going to get you fitter, but very slowly and you’ll quickly plateau at that level. In contrast, these bursts of much harder stress than normal, followed by allowing yourself to recover, is harder mentally to implement but what you really need to do to force yourself to get stronger and faster.

The key is to focus on one thing at a time, rather than trying for a bit of everything. So if your goal is to improve your sprinting, don’t dilute the stress by doing 2 sprint workouts and then also some climbing intervals and threshold efforts. Spend each of your 4-5 hard workouts focused specifically on sprint work and nothing else, so that you get the maximal stimulus in that one aspect of cycling.

“OK, But When is Too Much Too Much?”
This is, of course, the million dollar question. Not enough stress and you won’t get stronger. Way too much stress and you’ll break or burn out. What is optimal and how do you decide when to stop the stress and start the recovery?

What you want is Functional Overreaching. This is the state where you’ve gone over your normal limit, but not so far that you’ve fallen over the cliff into non-functional overreaching or full blown overtraining syndrome. With Ronnestad et al. (2014), the TRAD group had very intense perceived leg soreness after the first week, so a simple marker like that can be a good first sign.

Staying within Functional Overreaching is a fuzzy and moving target for everyone. Our Pez 10th anniversary party in Italy featured 5 awesome and big rides over 7 days, and that was roughly the pattern to two other dedicated camps I’ve attended. I’ve also had success with a self-designed 4 day block where I stayed home but did double workouts and accumulated about 150% of my typical weekly training stress score. I’ve also learned that I can recover quickly from this overload with 4-5 easier days, then immediately see a huge surge of extra fitness.

There is no scientific data or justification backing this up, more personal experience and practical realities of fitting cycling into the rest of our lives.

Summary
Training is as much art as it is science. What works for me may be too easy or too hard for someone else. The key is for you to decide what you need or want to focus on, and then try to cram in a heavy dose of it to give yourself a heavy stimulus, then recover and move on to another aspect of cycling that you want to improve.

Have fun cramming and let me know how it goes if you try it!

Stephen Cheung is a Canada Research Chair at Brock University, and has published over 70 scientific articles and book chapters dealing with the effects of thermal and hypoxic stress on human physiology and performance. Stephen’s Cutting-Edge Cycling, a book on the science of cycling, came out April 2012, and he can be reached for comments at [email protected] .

Evans vs. Scarponi the big challenge