It’s a no-brainer that hard efforts and intervals are the key to improving cycling fitness and performance. However, what is the best way to plan harder efforts and space them out between endurance training? Is it a good idea to cram them into a hard block or is it better to spread them evenly?

The Typical Training Cycle
If you’ve read any training books over the past two decades, you’re familiar with the basics of periodization, the process of building up your fitness gradually to peak for your period of key events. Within this process, training typically revolves around a four-week block, with three weeks of progressively greater training load followed by a week of lighter recovery to rebuild and super-compensate.

For many of us, each of those three weeks of harder training are structured fairly similarly, with each week consisting of both hard and easy efforts and the main difference between weeks being more volume or intensity.

How we fill that time is the big question. This article is not about the specifics of what hard efforts to do, but rather if and how to space them out over the course of a training cycle of roughly four weeks.

Block Training
Rather than this even spread, there are other ways to plan these four week cycles. One approach is block training, where you load the bulk of the hard efforts into a short period of time, then spending the remainder of the cycle on easier efforts with less loading of intensity.

When you think about it, this is exactly what happens with pros at a training camp, or when you and I go off and have a bike camp or holiday somewhere. We typically ride far more than we normally would at home, and then recover for a bit when we get home and catch up with the rest of our lives. 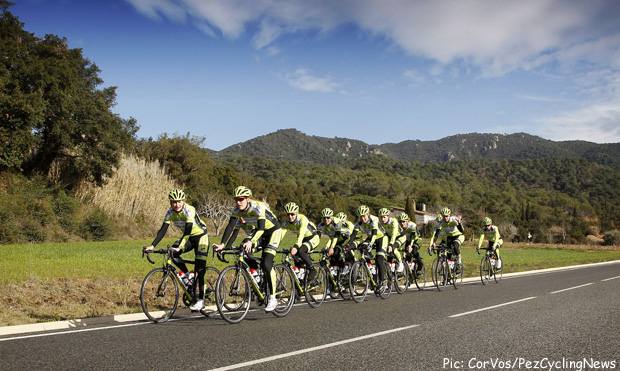 But does such cramming of training intensity work? Anecdotally, the fortunate times where I’ve gone on bike trips, such as the climbing heavy Pez 10th party in Italy back in 2012, I’ve come back after a period of recovery with a big bump in fitness.

Ronnestad et al. 2014
In the latest issue of Scandanavian Journal of Medicine in Science & Sports, this question of whether block training works was directly tackled by a Norwegian research group based in Lillehammer. Their specific question was, if you had an equal overall training load, does front-loading the intense high-intensity aerobic intervals into the first week give you better fitness benefits than spreading them evenly over four weeks?

• Both groups performed 8 high-intensity aerobic workouts (HIT) over the four weeks. HIT involved alternating between 6×5 and 5×6 min intervals at 88-100% max heart rate. For each workout, the cyclists were instructed to aim for the highest power output across intervals.

• The other training consisted of low-intensity training (LIT) at mainly 60-82% of max heart rate, so a fairly easy endurance pace.

• Ten cyclists performed block training (BP), where week 1 had 5 HIT workouts. Over the next three weeks, there was 1 HIT and the rest were LIT efforts.

• Nine cyclists performed traditional training (TRAD), where each of the 4 weeks had 2 HIT and the remainder LIT workouts.

Let’s emphasize this again – the key point here is that both the BP and TRAD groups had the same overall training load over the four weeks. The only difference was the spacing. Overall training in both groups was about 9.5 h/wk over each of the 4 weeks.

The Load-Out
This is a seemingly simple question, but hasn’t really been well-studied before in a controlled setting. Partly this is because of the inherent difficulty in controlling any athlete’s training for a month, let alone elite cyclists. I can tell you from experience how hard it is to do two-week training studies, let alone four.

Here are the main findings:
• One question asked was “perceived well-being in the legs.” Not surprisingly, the BP group reported much worse sensations after week 1 compared to TRAD. However, this decreased after the first week, and there were no differences between the two groups over the latter three weeks.

• During the HIT efforts, the BP group increased the average wattage over the intervals progressively over the four weeks by 7%. In contrast, no change was observed in the TRAD group.

• BP had a 4.6% increase in VO2max, with no significant improvement in TRAD.

• BP had a 10% increase in power at 2 mmol/L lactate (typically the start of lactate threshold), with no significant improvement in TRAD.

A caveat is that the TRAD group had about 20 W higher average wattages during Week 1 HIT than BP, so it’s possible that this group was already close to its fitness ceiling and had less room for improvement.

Rubber on the Road
Within the caveat above about the higher starting wattages in the TRAD group, I found this study very intriguing, and it’s something that we should consider if we’re aiming to optimize our fitness.

First and foremost, this study gives us permission and the freedom to explore and plan our training beyond the “three weeks hard, one recovery week” model.

Second, it shows the power of a dedicated hard training block, whether we’re professionals or recreational cyclists. To really improve and push ourselves to the next level, we have to get out of our comfort zone, whether that’s in perceived tiredness or what we think we can handle.

Third, pushing for more training stress doesn’t have to mean more and more harder efforts on top of what we’re already doing. Rather, it might simply mean reconfiguring the training that you’re already doing to a different pattern to give yourself a really strong training load.

Summary
You might have heard the old adage that the top pros go really hard when they need to go hard, and then go really, really easy. This is usually in reference to how hard they go during intervals or during easy days, but this study suggests that it also applies to how they design their long-term training.

So even if you can’t get away for a dedicated training camp, give some consideration to rethinking and rescheduling how you pattern your training. Get out of the rut of doing the same thing week after week. If you’ve been in the sport for a while and ride regularly, you’re likely fit enough to really overload yourself and push your limits higher.

Stephen Cheung is a Canada Research Chair at Brock University, and has published over 70 scientific articles and book chapters dealing with the effects of thermal and hypoxic stress on human physiology and performance. Stephen’s Cutting-Edge Cycling, a book on the science of cycling, came out April 2012, and he can be reached for comments at [email protected] .