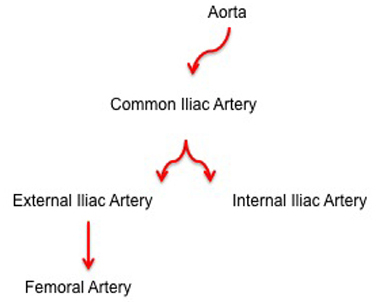 The underlying cause of EIAE in cyclists is presumed to be the prolonged and repetitive flexion and extension positioning of the hip combined with high rates of blood flow during prolonged and repetitive high-intensity cycling. Some cyclists may also have an external iliac artery which is abnormal in length or pathway in the hip. This leads to fibrosis and thickening of the inner wall of the artery, which then causes narrowing of the artery. This narrowing of the artery is different than the typical age-related atherosclerotic narrowing of arteries as there is no calcification and less inflammatory cells present in the EIAE. 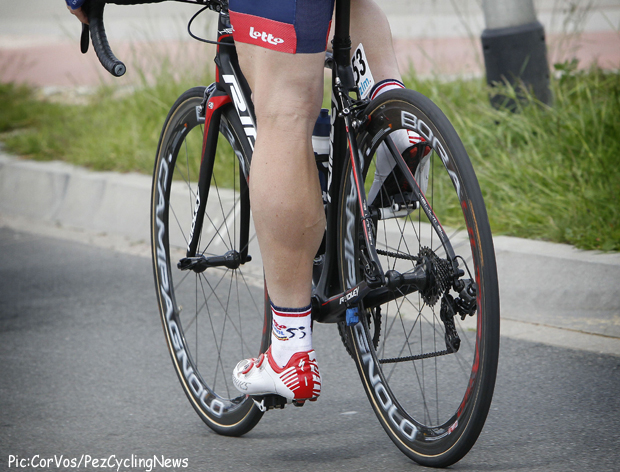 Symptoms
EIAE usually occurs in one leg, but it can also occur in both legs. Cyclists usually experience a feeling of thigh pain and/or tightness which usually only occurs at very high intensities of cycling, such as with sprinting or hill climbing. This feeling can radiate into the buttock and/or down to the calf. The leg then feels very weak or paralyzed, which forces the cyclist to decreasing the intensity of exercise and/or stop exercise.

A simple, accurate, and inexpensive screening test for any leg artery narrowing is comparing the blood pressure using Doppler ultrasound that is measured at the elbow and ankle. This test is called the ankle-to-brachial systolic pressure index and should be performed at rest and following maximal exercise. An index less than 0.9 is considered to be abnormal. However, the index can also be normal.

Diagnostic ultrasound imaging of the external iliac artery may help visualize EIAE. An MRI or CT angiogram is the probably the sensitive and specific way to visualize the location and extent of EIAE.

Treatment
If one wants to continue training and competing at a high level, then the most definitive treatment for EIAE is surgical. Various surgical techniques are available and can be discussed with a vascular surgeon. Cyclists generally return to their previous level of cycling following surgical treatment, although the post-operative rehab process can take numerous months.

WRITTEN BY: Dr. Victor Lun, MSc., MD, CCFP, Dip. Sport Med (CASEM) is a Sport Medicine doctor who practices at the University of Calgary Sport Medicine Centre. He is the team physician for several the winter and summer sport Canadian national sport teams.