Toolbox: Fire it Up or Chill Out?

Intensity may be the most important contributor to cycling performance once the race begins. It’s so important because all of the motivation, confidence, focus, and emotions in the world won’t help you if your body is not physiologically capable of doing what it needs to do for you to ride your best.

Whether you are cruising along in the peloton during a long, flat stage, ascending a Category 1 climb, or sprinting the last 100 meters of a crit, you must be at the right intensity for you to ride at your highest level.

What Is Your Intensity?
Simply put, intensity is the amount of physiological activity you experience in your body including heart rate, respiration, and adrenaline. Intensity is a continuum that ranges from sleep (very relaxed) to terror (very anxious). Somewhere in between those two extremes is the level of intensity at which you ride your best in different race situations.

For example, Chris Froome needs to be relaxed during the early parts of the Alpe d’Huez stage of the Tour De France to conserve energy before the big ascents that lie ahead. Brad Wiggins must be at moderate intensity as he attacks Mont Ventoux where he has enough adrenaline to power up the climb, while retaining reserves for the final few kilometers. Robbie McEwen must be a nuclear reactor in the final sprint to the finish in Marseilles. 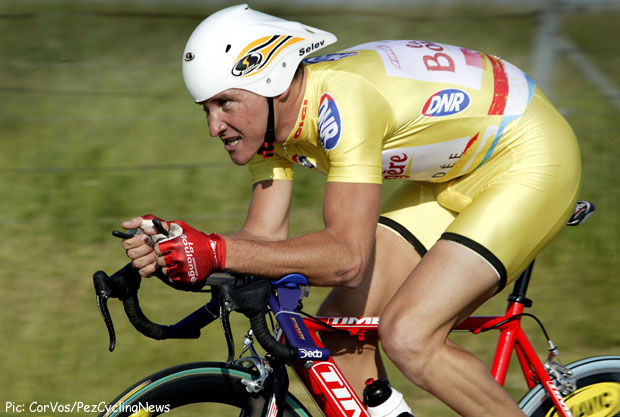 Thomas Voeckler has always been a master of controlling his intensity. Here he is pictured in his early days as a pro at the Tour of Luxembourg in ’03 on his way to his first big GC win.

What is Intensity?
Intensity is made up of two components. First, there is the physical experience of intensity, that is, what you actually feel in your body when you are riding. Are you calm or filled with energy? Are you relaxed or tense?

The physical experience and the perception of intensity are affected by several mental factors. If you’re not confident, feeling frustrated and angry, and focusing on winning, you will probably see the intensity as negative. In contrast, if you are confident and positive, happy and excited, and focused on riding well, the intensity will be perceived as positive.

Signs of Over- and Under-intensity
Intensity produces a wide variety of physical and mental symptoms that can help you recognize when your intensity is too high or too low. By being aware of these signs, you will be able to know when you’re not at your prime intensity and can take steps to reach that ideal level.

Overintensity. Muscle tension and breathing difficulties are the most common signs of overintensity. Most cyclists indicate that when they’re too intense, they feel tension in their shoulders and their legs, which happen to be the two most important physical areas for cycling. If your shoulders are tense, they will rise with your center of gravity causing you to lose power and efficiency. When your legs are tense, you lose the ability to generate smooth and strong pedal strokes.

Cyclists who are overly intense often exhibit poor posture on their bike. Muscle tension causes their shoulders to rise and their body to seem to close up. Cyclists who are anxious also tend to go out too fast early in a race, causing them to run out of gas when they most need energy. Overly intense cyclists often look rushed and frantic. If the peloton is taking its time, overly intense cyclists may become impatient with the slow pace and attack too early.

Overintensity negatively influences cyclists mentally as well. Anxiety lowers your confidence and causes doubts in your ability, which may prevent you from breaking away when you are physically capable of making and sustaining the attack. The physical and mental discomfort produces negative emotions such as frustration, anger, and depression. The anxiety, doubts, and negative emotions hurt focus by drawing attention away from important tactical and pace information and onto how badly you feel.

Intensity and Tensity
The ultimate goal of prime intensity is to find the precise line between intensity and tensity (yes, that is actually a word). The closer you can get to that line, the more your body will work for you in riding your best. If you cross the line to tensity, your body will no longer be physically capable of a great ride. Pro cyclists have the ability to do two things related to this line. First, they have a better understanding of where that line is, so they can ‘tightrope walk’ on it, thereby maximizing what their bodies can give them. Second, they’re able to stay on that line longer than other cyclists, which enables them to ride at a consistently higher level for longer periods of time.

My next three articles will introduce you to how you can identify your ideal cycling intensity and then provide you with the tools you need to reach and maintain your best intensity and your fastest riding possible.

About Dr. Jim
Dr. Jim Taylor is internationally recognized for his work in the psychology of endurance sports. He has worked with professional, world-class, junior-elite, and age-group cyclists in many sports, including cycling, for more than 27 years. He has been the team sport psych consultant for two professional cycling teams A former internationally ranked alpine ski racer, Jim is a 2nd degree black belt in karate, a marathon runner, an Ironman triathlete, and an avid cyclist. Jim is the author or lead editor of 14 books, including Prime Sport: Triumph of the Athlete’s Mind, The Triathlete’s Guide to Mental Training, and Applying Sport Psychology: Four Perspectives, has published over 700 articles in popular and professional publications, and has given more than 800 workshops and presentations throughout the North America and Europe. He publishes the Prime Sport Alert! bi-monthly e-newsletter and blogs on sports here. To learn more, visit his web site.
Like PEZ? Why not subscribe to our weekly newsletter to receive updates and reminders on what's cool in road cycling?

The London-Paris ten years old and getting stronger