Toolbox: Jump In – The Water’s Great!

Whether training or stage racing, recovery is the name of the game. Many tools and tricks have been used to maximize recovery, including the chilly prospect of cold-water immersion. Does a post-ride dip really help with cycling recovery?

They Who Recover Fastest, Ride the Fastest
One of the fascinations with stage racing is the riders’ ability to hammer themselves into the ground, then wake up and do it all over again day after day. Of course, recovery back to 100% is well-nigh impossible (except during the darkest days of the doping era), and the signs of weakness and lack of recovery in this year’s Tour has been suggested as evidence of a cleaner sport.

When it comes to training, it’s an oft-repeated mantra here at Toolbox, but the hard training that we put in is only half of the equation. Without adequate recovery, fitness will never be optimal because your body has not repaired itself from your previous training before getting another large dose of training stress. Worse, continued lack of recovery will either stagnate your training or degenerate into non-functional over-reaching (NFOR) or full-blown overtraining syndrome (OTS).

Cold-Water Immersion
One of the fashionable recovery methods that have caught on amongst many professional athletes is that of cold-water immersion (CWI). The basic premise or theory is that, like icing an injury, CWI will minimize swelling and inflammation in the muscles post-exercise, along with providing an analgesic (painkilling) effect.

The use of CWI first became popular with impact sport athletes such as football, rugby, soccer, etc. But it has become increasingly common in endurance sports and in cycling, with teams like Omega-Pharma Quick-Step adopting the practice. The big scientific question, of course, is whether there is actual ergogenic benefit for cyclists.

The evidence to date is equivocal about any benefit for cyclists. Most studies relied on employing plyometric jumping, high-impact sports (e.g. downhill running), or heavy weight-lifting (e.g. eccentric contractions such as lowering a very heavy weight) to cause heavy muscle damage. Not only is this fairly unrealistic exercise compared to the action of pedaling a bike, the damage is generally way beyond anything that would be experienced by cyclists. 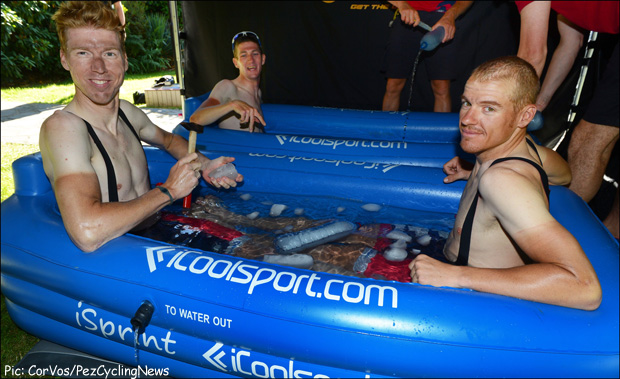 Poppendieck et al.
In the August 2013 issue of the journal International Journal of Sports Physiology and Performance, a German research group (Poppendieck et al. 2013) reviewed the existing scientific literature to investigate the question:

“What are the effects of post-exercise cooling (duration, temperature, and type of cold application) on performance recovery in trained athletes?”

Two interesting approaches were taken by the authors here. First, they focused their investigation on trained athletes only (competitive at least on a regional level, active at least 3 times per week, or VO2max >55 mL/kg/min), eliminating studies that utilized relative non-trained subjects.

Second, they systematically analyzed the existing literature using a meta-analysis. This has become very popular in medical research, so let’s quickly see what this type analysis is all about.

Meta-What?
The traditional review of literature qualitatively surveys different articles, but may be strongly biased by the author’s choice of articles or inherent bias or beliefs. It may also be hard to qualitatively compare studies, each with their different methodologies.

Meta-analyses instead statistically analyzes a broad range of scientific studies to come up with an overall effect size or the expected difference from a manipulation (e.g. CWI improves sprint performance by 2.6%). One strength is that only 10 subjects may be tested in one particular study, but a meta-analysis may find 20 studies, each with 10 subjects, and calculates the effect size with the 200 subjects instead, making for a more powerful analysis.

Key Methodology
I noted above that a traditional review rarely tells you how the author comes up with the papers they discuss – you mostly take it on trust that the author is presenting a balanced report. There is no hiding with a meta-analysis – the absolute key part is that the author MUST list in detail exactly how they searched the literature (e.g. what journals, databases, or key terms they used and when), and also the parameters used to include or exclude studies in their analyses. In Poppendieck et al. (2013), the parameters included:

• Trained athletes only (see above for definition).

• At least 90 minutes between cooling intervention and the post-test to remove the potential benefits of pre-cooling on performance.

Analysing the Meta-Analysis
So what was found in this survey? Some key findings to note:

• 21 studies with 216 subjects were studied in total. 14 of these studies were published in the past 2 years (since 2011) and had not been included in any previous review. This certainly shows the newness and relevance of this topic.

• Overall benefits were very small, on the order of about 2.4% overall improvement across all studies, but many of the analyses cross the “zero” line and suggest that there may be no practical benefit.

• Sprint type exercise seems to have the most potential for benefit, with endurance exercise (e.g. cycling) slightly less to no benefit found across studies.

• Actual cold-water immersion, with water temperatures 12-15oC, seems to have more potential benefit than cold packs (e.g. icing). Furthermore, if possible, it appeared that full body immersion up to the chest is preferred over leg immersion only.

• CWI only had minimal benefit with short recovery bouts of 2-3 hours between exercise. The effect sizes became larger after 24 hours, and larger still at up to 96 hours. The caveat is that there are much fewer studies analyzed using such long periods between exercise, so one outlier study can really skew the analysis.

Summary
In my view, meta-analyses are definitely the wave of the present and future when it comes to comprehensively surveying the literature. I’ve started down this road myself, as I published a meta-analysis on the effects of exercise and training on glucose control in Type 1 Diabetics (Tonoli et al. 2012) and have another upcoming on whether pre-cooling or cooling during exercise is an effective ergogenic aid in the heat (British Journal of Sports Medicine).

What I take away from the Poppendieck et al. (Poppendieck et al. 2013) meta-analysis is that CWI, if done with the above guidelines for temperature and depth of exposure, MAY have the potential for slightly improving recovery and subsequent performance. In a worse-case scenario, CWI doesn’t appear to harm endurance exercise performance, so it is a good candidate for those with a “marginal gains” philosophy.

For the rest of us, CWI might remain of interest but only after a very, very heavy day or block of training. It is likely that we can get the same or greater recovery benefits by focusing on easy-to-do things like post-ride nutrition and adequate sleep.

The Tour de Pologne Sets off Again from Krakow