The word “safety” when applied to the word “cycling” is a combination that draws a mix of general disdain from most serious cyclists. Boredom, and outright unconcern can be the typical responses. However, crashes are the dark side of cycling, and it’s our duty to decrease the odds of it happening for ourselves and our families.

Recently I was asked to keynote the first annual California Bicycle Coalition conference on the iconic Queen Mary, which ironically is now anchored for eternity in her grave of a harbor in Long Beach. The request to speak on the topic of “safe cycling lifestyles” was cause for reflection on my days as a bicycle industry rabble rouser. One Facebook purist even accused me of single handedly killing Tullio Campagnolo’s quick release hub. I have never written publicly about my role in this “alleged demise” and thought this might be the time to spill the topic to anyone who has ever questioned the wisdom of riding a bike on the street, in packs, the security of their equipment, or maybe why QR hub/fork systems are not quite the same as they used to be.

The QR Thing
So why not just file those damn little ridges off the fork ends and be done with it? Many people and a few bike shops still do this, even if it is defies the laws of man, the UCI and logic. 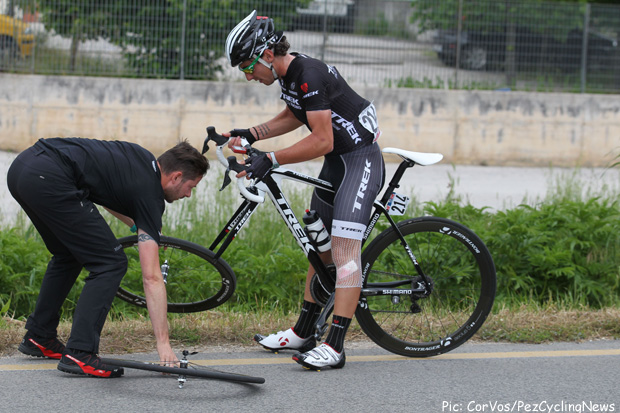 Fabio Felline at the Giro with a front wheel change. They may take a second or two longer this year – but what price safety?

My Other Life. One of the hats that I sometimes wear is that of an expert witness in litigation matters dealing with plaintiff and defense cases involving actions in which somebody gets hurt and seeks compensation. Damage can range from ripped flesh, broken bones, blood loss, to life lost and of course money, lots of it. Why is this important? In case anyone is keeping score, our first love—I’m assuming that might be one or more of your bicycles—is labeled by the Consumer Products Safety Commission as our most dangerous and I would add potentially lethal preoccupation. Mull that fact over in your mind all you careful cyclists.

I think bicycles are a lot like guns, they don’t kill people, but people will. I have personally been involved as a plaintiff’s witness in more than 20 phantom front wheel release cases, 3 of which ended in death, and 7 more in life-compromising spinal and brain injuries. In the rest of the cases the cyclists merely lost pieces of their body, like teeth and skin, and or broke bones but eventually recovered. Why did these accidents happen? They happened because somebody did file em off, got lazy or foolish, and didn’t do what it takes to keep the wheel on.

I speak from experience since I was one of those lazy fools riding an 80’s vintage MTB, bouncing over rough stuff until my front wheel dislodged. I hit the ground, and was temporarily knocked unconscious with paralysis. As I lay there in the dirt unable to move until somebody found me, I became quite introspective. In retrospect, I was lucky and recovered probably due to the softer turf landing.

I responded with personal action that helped bring industry responsibility to the forefront and I believe save lives. Fork tips are not the only item that needs evaluation. More recently the issue of questionable carbon fiber components that have been known to break when released into the consumer pipeline have raised concerns. Closely related is the spectrum of the sleeping giant proportion of aging carbon components not designed for lifetime use.

It’s my industry too and somebody needs to stand up when stuff just ain’t right. Having said that, generally the bike industry has been more diligent about monitoring problem parts and compared to problematic auto industry, we might be runner ups for sainthood.

I grew up under the watchful eye of a WWII pilot father, who returned home in one piece and was so eternally grateful that he never stopped celebrating life by investing in the shrine of safe harbor. To my dad, every system needed backup, and every lesson needed to be redundant to stick. “Safety First” was my dad’s creed and he lived to make sure his three kids understood and appreciated our gift of fresh air and blue sky by living safely every day. When I went to Bonneville, the Mecca of all-things-fast, to break Dr. Alan Abbott’s world bicycle speed record my dad made the trip to make sure his son didn’t do anything stupid, and together we drew a comfortable distance between “taking a risk” and “calibrating a risk”

So, I jumped at the opportunity to address the Bicycle Coalition members for several reasons. First, I never miss an opportunity to discuss and debate the topic of being an industry watchdog on guard against dangerous and or thoughtlessly used equipment with no safety net, which unprotected QR hubs certainly represent. Second, I think of it as a fundamental responsibility that all of us who ride bikes practice safe cycling, although that lesson was a long time coming.

Performance Tuning for Safety & Speed
For those who race, train and commute in traffic, programs similar to our JHPS Cycling Street Survival Skills training course is perfect for reinforcing safe riding techniques. Attendees report making fewer errors, thus avoiding a costly payment of flesh and blood. We take safety to a higher plateau by spending time training racers to both get faster by improving their cornering capacity and general ability to use their equipment more efficiently.

That also includes braking, and begs the question of when do you use them and when do you not? We have found that accident avoidance is often best achieved by proactively steering around an obstacle rather than braking as a defensive action. Have you practiced emergency response? The well-documented wisdom that I want to share in a nutshell is ride with DEFENSIVE AGGRESSION or DA.

What about perception/reaction procedures? Do you know your own reaction time, and have you worked to shorten it? Here are a few examples where DA can get you out of trouble:

Steering vs. braking
Often a quick steering maneuver is the safest means of escaping a dangerous situation which might mean a rider or group of riders falling in your direct path or a driver in an SUV talking on a cell phone pulls out of a side street absorbed in a world that you–on your bike–are not part of. When time dictates, an immediate response of accelerating and steering out of something is preferable to braking and oftentimes in the closing milliseconds before a crash you will only have time for one action. When you choose the traditional braking response you may effectively give up control of your bike. Steering out of a situation offers you more margins for success and speed is often your best ally. This is especially true for off-road riding and graphically reinforced from training and racing on the velodrome where bikes are reduced to the bare essentials of accelerating and steering.

Efficiency and cadence
In terms of efficiency, did you know that a sizeable percentage of your energy in training and racing is wasted by not utilizing the most efficient gear to maximize momentum? This is certainly true while climbing quickly both in and out of the saddle, in pace lines and holding a straight line in the pack, pacing or echeloning, or riding with traffic.

Serious Play
I love to replay those scenes of my childhood for lessons on how I got to be a cyclist, and a few of those lessons are indelible. My brother and I, in complete defiance of our father, in the interest of fun and while he was at work, watered down our long smoothly toweled driveway and garage at the family home. Our totally unsanctioned practice was to head down the hill by our house and throw a hard right bank into the driveway. We both rode sturdy Schwinn cruisers and would hammer the coaster brakes, sliding in at speed, about 100 feet down the drive into the garage where we would execute a 180 degree directional change and still keep the bike upright. It didn’t always work like that, but we survived and it did vastly improve our bike control techniques at an early age. I actually incorporated a version of this practice into our MTB workshop that I teach today.

In summary, I want to dare you to be both safe and highly adventurous, like the lovely old Queen once was. Take a course in safe riding skills even if it is below your skill level, it will challenge you to consider factors that ultimately will make you a more complete and yes “safer” cyclist, because, trust me, it’s a dangerous world out here.

“No psychic reward can ever be so powerful as winning a dare with yourself.”
From The Executioner’s Song, By Norman Mailer

About John
John Howard is one of the pioneers and true legends of American bike racing with palmares including: 3-time Olympian, Ironman world champion, bicycle landspeed record, USA Cycling Hall of Fame, and elite and masters national champion. John is also an active cycling coach and the author of Mastering Cycling. Check out more information about John and his coaching at www.johnhowardsports.com.