The hardest part of racing can be when the battle to establish the breakaway begins. Suddenly all bets are off and friendships tossed away like discarded water bottles. Exciting to watch, hell to live through, but what are the physiological requirements to make the break?

The Best Stuff They Don’t Show on TV
We are spoiled for TV coverage of racing. With a few clicks of the computer mouse, we can find live feed of many of the biggest Euro races, or else find it on YouTube shortly afterwards. When the coverage begins, what we usually see is a breakaway up ahead in a steady rotation, with the peloton rolling along at a steady pace some minutes behind.

This coverage is nice, but it also misses the best and often hardest part of the race, and that’s the first hour or even more when the breakaway gets established. Riders are constantly attacking off the front individually or in small groups, while the peloton chases every attempt down until the right combination is allowed to go up the road. With such a frantic first part of the race, the pace may average 50+km/h for 1-2 h, to the point where some pros are now warming up on trainers before heading off to race for 4-5 h. 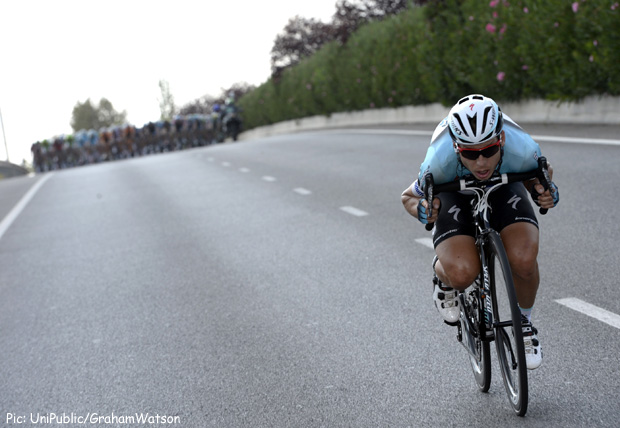 Tony Martin during his incredible break in Stage 6 at the Vuelta.

How is it Done?
As with all aspects of smart training, the best way to train for racing is to understand the demands and then figure out how to train to meet those demands. The scientific literature has reported on professional riders’ power outputs for single-day and stage races in the past. However, knowing what we know now about the doping epidemic, it has become nearly useless to treat them as anything but science fiction. And now, thanks to pervasive paranoia, pros guard their power numbers closer than the neighbourhood Rottweiler guards its bone.

What we can do, of course, is to use our own power meters to record what happens during the hardest parts of racing, whether that is on the first parts of the race when the group is sorting itself out, the tough climb of a circuit race, or the final kilometres. The challenge, though, comes if we’re not yet strong enough to make the selection. How do we get data when we’re off the back?

Scouting by Strava
One piece of technological manna from heaven has been the almost ubiquitous adoption of Strava by tech-obsessed cyclists. For every hill worth climbing, there is a Strava segment, and going through the rankings to spot familiar names will give you a very clear insight into how fast you need to be able to climb particular hills to keep up with competitors in your category. This is especially useful if you can match segments ridden during prior races, so that you can see what the demands are during actual races rather than single “beat the KOM” efforts.

For example, our local Niagara Classic race always features Saylor’s Hill, a final 400 m wall of about 11% average with peaks of 17%. It comes at the end of a long gradual uphill rolling drag. In previous years, the finish line is at the top of the wall, and races often end in a mass final hill sprint from a small group of survivors. Checking out Strava, there are 2000+ rides by 378 riders, with many of the best times being set on race day itself. Therefore, while the KOM is 58 s, 25.2 km/h, and 441 W, I can also see that my category of competitors are hitting about 1:20-1:30 (~17.8 km/h). Indeed, I know one of my competitors is nearly my exact weight and he averaged 406 W, so ultimately that’s what I’m going to need to target and train for in order to make the breakaways that form at the top.

Science Non-Fiction
Luckily, there is also emerging new scientific focus on pacing strategies in sports such as cycling and speedskating. Going from the premise that energy is a finite resource, these studies are trying to understand how best to use that limited energy to maximize average power output and speed over different time trial distances. My friends Chris Abbiss of Edith Cowan University in Perth, Australia, Carl Foster of U. Wisconsin – La Crosse, and Jos de Koning of Vrije Universiteit Amsterdam have been leaders in this theme of research. So let’s look at some of their research and ideas from the latest August 2013 issue of International Journal of Sports Physiology and Performance on the demands required to break away from the pack (Abbiss et al. 2013; Cohen et al. 2013).

Abbiss et al.
Chris’s group, including Vincent Villerius – a sport scientist from Team Cofidis – reviewed professional and Australian Institute of Sport data on the specific demands of the initial establishing of a breakaway in professional cycling. Rather than a single hard sprint to get clear of the pack followed by a return to time trialing at threshold, a breakaway is much more complex in power output.

What Abbiss et al. found was that professional breakaways required cyclists to generate not one, but multiple sprints of 5-15 s at high (~9.5-14 W/kg) wattages to respond to other attacks, jump clear of the pack, or start bridging up to the break. Indeed, some races involved riders performing >100 very short (<15 s) bursts above 70% peak aerobic power output (roughly what we may think of as a steady and hard “Tempo” pace). Once a slight gap is opened to the pack, the breakaway cyclist then needs to keep and open a gap, with a high power output at above threshold (~450-500 W for the Cofidis pros) for 30 s to 5 min, depending on how hard the pack decides to chase. Obviously, many breakaway attempts are unsuccessful, so the unfortunate cyclist may have to repeat the above efforts several times as they try to get into the main break of the day. If successful and a breakaway is established, the fun and pain doesn’t end, as the simple fact of fewer riders to share the work means that the break riders have to maintain a higher power output than the much larger peloton (~3.3 compared to 2.6 W/kg, in unpublished observations from pro power files). Cohen et al.
A related paper from Foster and de Koning in the same issue looked at the effect of such hard breakaway efforts on subsequent time trialing and also your perception of exercise. In brief:

• Trained cyclists rode 2 10 km time trials (with additional familiarization trials). The first 4 km was controlled at a set pace for both trials.

• Cyclist had full feedback on power output, speed, and distance.

• One was a typical self-paced time trial effort from 4-10 km.

• One was a BURST condition, where at 4-5 km, the cyclists were told to hammer as hard as possible, with the idea of “breaking away,” followed by the final 5 km as a continued time trial.

The results highlight how physically and mentally taxing the effort of breaking away can be. In BURST, the 4-5 km power output was much higher (282 W) compared to CONTROL (240 W).

The BURST was in some senses a painful bust, however:

• Ratings of perceived exertion (RPE) were obviously much higher during the 1 km BURST (9 on a 10 point scale) than the rest of the BURST TT and also throughout the CONTROL TT.

• Interestingly, RPE increased steadily over the 10 km TT in both conditions. But despite similar RPEs except over that 1-km BURST, the lower PO in the BURST condition showed that the cyclists never recovered physically, and also struggled to recover mentally from that break effort.

Summary
Both the Abbiss et al. and the Cohen et al. studies highlight just how difficult it is to physically break away from the pack, and also helps us to see just how painful the plight is of riders like Tony Martin being caught metres from the line after an all-day solo break. What are some things we should take away from these studies towards our own training?

• Breaking away is a complex power dynamic. You need to train your sprinting and its repeatability, your 3-5 min anaerobic capacity, and raise your threshold power. Just one of these abilities is not enough, and all of these must be combined with minimal recovery in between.

• Breaking away HURTS! You are definitely going to pay a price for it, so do not do it unless you absolutely mean it. This applies both to early breaks an also to breaking away near the finish for the win.

• Cheer for the breakaway – they deserve it!