We’ve all experienced the feeling of frustration when we get reeled in by the peloton after a breakaway or our legs turn to Jello with a mile until the summit of a climb. It’s a horrible feeling that often brings about a cascade of negative thoughts and anxiety.

But what is frustration precisely and what causes it? Simply put, frustration arises when the path toward your goal is blocked. Most cyclists think of frustration as a bad emotion, but it is actually more complex than that. The fact is that frustration is hard wired into us and has tremendous adaptive value. Frustration starts as a good emotion because when we get frustrated, we are motivated to remove the obstacle that is blocking our path toward our goals. We try harder and that extra effort frequently results in clearing that path, enabling us to continue to pursue our goals. 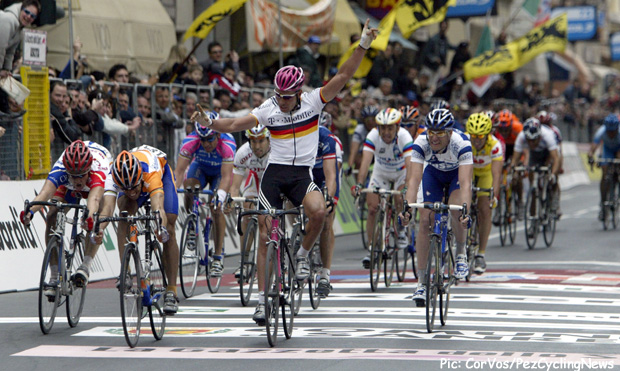 Frustration in cycling comes in many forms but losing a Classic thanks to celebrating too early? Not many know that level of frustration but Erik Zabel does thanks to this effort here in ’04 at Milan-SanRemo.

Negative Emotional Chain
Unfortunately, if, despite our best efforts, we can’t overcome those roadblocks, frustration can become a destructive emotion. In fact, if frustration isn’t dealt with quickly and effectively, it can trigger what I call the “negative emotional chain” in which frustration leads to a descent into a series of truly unhealthy emotions.

If frustration persists unresolved, it can morph into anger. Most cyclists also believe that anger is a bad emotion, but, like frustration, it too has both positive and negative sides. Anger starts out as being helpful because it too is motivating. When you are angry, you want to go after the thing that is causing your anger, for example, when you get blocked out early in a charge to the finish line, your anger turns into adrenaline and power that may propel you back into contention before the final sprint.

Unfortunately, anger can swiftly become a harmful emotion. The feelings of anger are like those of frustration, but with the volume turned up considerably. Your body can become tense, so you start pedaling squares and you lose your rhythm and power. Your focus narrows so much that you miss important cues necessary to ride well, for example, you neglect to notice fast enough when another rider attempts to separate from the pack. And your thinking becomes clouded by the anger, so you aren’t able to think clearly or make good decisions about when to attack.

If you’re not able to clear the obstacles from your path at this point, your emotions shift to the final stage of the negative emotional chain; you experience despair. You have tried and tried and tried and still can’t remove the barriers, so the natural thing to do is quit. What’s the point of continuing to try if nothing you do works? For example, you make multiple attempts to shake the break free from the peloton, but can’t seem to shake it. The unfortunate outcome of the conclusion of the negative emotional chain is immediate failure to achieve your goals. You will usually give up and either ride at the back of the peloton or call it a day.

It has been my experience that if you move from frustration to anger, continued efforts that day usually fail. And if you experience the negative emotional chain on a regular basis – sinking repeatedly into despair – you will likely lose your motivation and be unwilling to make a sustained effort in the future. With each descent down the negative emotional chain, you come to believe that your actions have little effect and you will progressively lose confidence in your ability to achieve your cycling goals.

Developing Frustration Mastery
Despite the fundamental role that frustration plays in interfering with your efforts to be the best rider you can be, you probably haven’t been shown how to deal with your frustration in a constructive way. Your goal is to learn to stop the negative emotional chain at frustration by responding positively to the frustration when it first arises.

The first mistake that many cyclists make when faced with frustration is to just increase their effort, in other words, do whatever you were doing more and harder. But then you are violating the Law of Insanity: doing the same thing and expecting different results.
When frustration first arises, rather than plowing ahead, you should do just the opposite, in other words, step back from the situation that is causing the frustration. For example, if you just can’t seem to stay with the lead group, rather than fighting to hang on to exhaustion, recognize that you can’t do it at that moment, allow yourself to fall back, and give yourself some time to regroup. By dropping back temporarily, you create emotional distance from the cause of the frustration, thus easing its grip on you.

Next, create a physical state that counteracts the tension that has come with the frustration. Relax your body, breathe deeply and evenly, and refuel and rehydrate. This step lessens the uncomfortable physical symptoms that come with frustration (e.g., anxiety, muscle tension, inhibited breathing) and reduces further the physical experience of the frustration. Another powerful way to counter the feelings of frustration during this time is to generate thoughts and emotions that are the opposite of the frustration. Think about your outstanding preparation, sing a song in your head that fires you up, focus on regaining a smooth pedal stroke, all of which will reenergize you and bolster your confidence and determination.

Once the negative emotional chain has been broken, refocus on the challenge ahead, in the case of the previous example, reconnecting with the lead group. Focus on what you need to do to catch up, such as assuming an aggressive mindset, staying relaxed, breathing consistently, and setting a pace that will slowly enable you to regain contact with the leaders.

But the reality is that you can’t always immediately clear the obstacles to your goals, so continued efforts in pursuit of those goals would be futile and descent along the negative emotional chain would be likely. For example, you may just not have the legs to rejoin the lead group. You have two options here. First, you can change your goals to ones that can be achieved in the short term. Returning to the previous example, continuing to pursue the goal of catching up will likely take you quickly along the negative emotional chain. But if you accept that you won’t catch up and change your goal to staying away from the peloton, you can still learn something, enjoy yourself, and have a great race experience.

Second, there are going to be days when you just aren’t going to make any progress toward your goals and continuing to try without success will only discourage you and actually hurt your efforts in the long run. In this case, it may be wise to deliberately “give up” and choose to fight another day.

About Dr. Jim
Dr. Jim Taylor is internationally recognized for his work in the psychology of endurance sports. He has worked with professional, world-class, junior-elite, and age-group cyclists in many sports, including cycling, for more than 27 years. He has been the team sport psych consultant for two professional cycling teams A former internationally ranked alpine ski racer, Jim is a 2nd degree black belt in karate, a marathon runner, an Ironman triathlete, and an avid cyclist. Jim is the author or lead editor of 14 books, including Prime Sport: Triumph of the Athlete’s Mind, The Triathlete’s Guide to Mental Training, and Applying Sport Psychology: Four Perspectives, has published over 700 articles in popular and professional publications, and has given more than 800 workshops and presentations throughout the North America and Europe. He publishes the Prime Sport Alert! bi-monthly e-newsletter and blogs on sports here. To learn more, visit his web site.

Belkin and Santini: the perfect match