In modern stage racing, time trialing has become the key to success, but how to unlock that optimal time trial remains a mix of science and feel. One of the key ingredients is an optimal pacing strategy to expend our finite energy. Is it fastest to stick to an even effort throughout? Or what are the pros and cons of power output and speed variations?

But somewhat paradoxically, the importance of these TTs have actually become greater over the years. We first saw this with Miguel Indurain in the 1990s, who controlled the attacks of the climbers in the mountains, and then carved out huge time gaps in the TTs. And climbers such as Froome and Contador are now also elite Tour time trialists, as the gains from attacks in the mountains have become less and less. 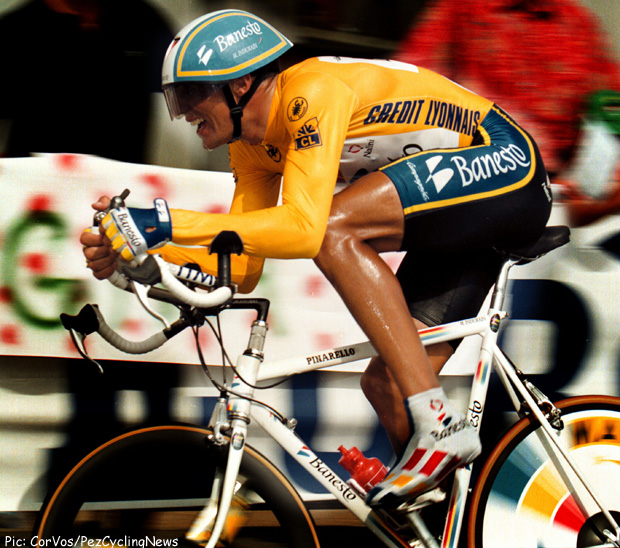 Big Mig himself in action at Le Tour. The most feared time trialler in the ’90’s.

Shorter stage races become even more dominated by time trials. Look back at this year’s Tour of California, where the top three on GC were also the top three in the single TT over 8 days of racing. At the amateur level, the common 3-stage format of road race, TT, and a crit means that time trialing can become overwhelming.

Fast, Slow, How do I Go?
So if it’s clear that time trials are critical to stage racing, the best way to approach TTs is anything but clear. One of the big issues is proper pacing strategy, or how to expend the limited watts and energy that we have at our disposal. Some of the questions surrounding proper pacing include:

• Is an even pacing (constant wattage) the best strategy, or should we aim for a constant speed throughout regardless of required wattage?

• What are the effects of wind and hills? Corners?

• What about a fast start strategy?

Wells et al. 2013
As you can see above, there are a lot of variables involved in planning a perfect pacing strategy. And no one study is going to be able to answer everything. And while the goal is to advise on what to do in the real world, such studies are almost impossible to properly perform with live subjects and real courses, due to the difficulty in scientifically controlling variables and also getting participants to perfectly match desired power output profiles.

So what scientists are aiming for is to mathematically model different pacing strategies to explore best outcomes. One recent UK study targeted the last one of my above bullet points, exploring the effects of power variations over the course of time trials of different distances. The findings are quite interesting and instructive.

• Distances modeled of 4, 16.1, 20, and 40 km. The 4 km was chosen as the track pursuit distance, and the model for rolling resistance and acceleration were customized towards a track surface and bends, rather than the assumed straight, flat, and windless road of the three longer distances.

• As noted in the above, the study avoided the confounding factors of wind and hills.

• Variations in power output of +/- 5, 10, and 15% were modeled. One novel aspect of this model was that, unlike prior models that generally just assumed an instant “step” change in power and resultant speed, this model incorporated the gradual nature of acceleration and deceleration on speed.

• Each TT followed a “fast start” strategy, where power over the first time point was at the high range of the modeled power (i.e., for the 500 W average power, the 10% variation trial had a starting power of 550 W).

• The period of each variation was also differed. That is, the accelerations ranged from an instant change in power output (i.e., short bursts of power) through to more gradual and longer changes in power output. So the total average power remained similar, but the surges were either quick or long.

Model Citizen
So how did our model citizen racer do with the different strategies? The biggest separation in results was with the short 4 km track pursuit versus all other distances.

• The periodicity also played an important role in the 4 km results. The faster times were found with longer periods and relatively fewer variations. So it’s not a case of sprinting every half lap out of the turns and onto the straights, but more gradual fluctuations of power.

• With all of the longer “road” TT simulations, however, the even pacing strategy dominated as the best overall plan. This was generally true across all average power levels (200-600W) and distances.

• With some variations, the impaired performance was generally greater the higher the amplitude of fluctuations and also the more frequent these power changes were.

• With the longer distances, if you do have to fluctuate your power, one way to mitigate the inherent impairment is to have shorter durations of variability. This was a key difference to the findings from the 4 km TT simulation.

Rubber on the Road
Despite being performed solely on a computer, the study has a nice degree of real-life relevance. Rare are the time trials that are indeed run over a dead flat road with no wind, climbs, or corners. So one thing we can take from this is how to approach corners on a course.

Given the model’s findings, it suggests that it would be better to gradually increase power coming out of a corner rather than stomping hard on the pedals if the TT is extremely short. It is somewhat difficult to explain the contrasting conclusions from the short versus the longer TTs, but it is possible that the “fast start” strategy dominated the 4 km TT but had minimal effect over the longer ones.

Over anything longer than a short prologue, however, it seems that it would be better to stomp hard on the pedals out of corners. This is likely related to the importance of using a high burst of power to maintain overall speed.

I’m in the Netherlands for a month, so given all the flat roads, it’ll be a chance to try out different pacing strategies. Gotta do something about the wind though! I’ll be finishing up by being an invited speaker at the 2nd World Congress on Cycling Science, sponsored by the UCI and in Leeds July 2-3 to coincide with the Grand Depart.