Toolbox: Pedal to the Metal

We know that success in cycling is built on a variety of factors from nutrition to aerodynamics, training to talent. Today we look at the role of the foot in cycling and the nuances of the foot / pedal interface that are trying to rob you of speed.

Last time we began a conversation about the role of the foot in pedaling with a quick overview of the anatomy, terminology, and movement sequences used. This time we want to delve a bit deeper into the role of the foot as it relates to the all important transitional phases of the pedal stroke at Top Dead Center (TDC) and Bottom Dead Center (BDC). We’ll also look at the role of the shoe/pedal interface and ways that you can improve performance by maximizing your individual fit. As last time, we’ll again be assisted by Dr Kirk Herring, a podiatrist and cyclist from Spokane, Washington, who has kindly offered to help our understanding of this most complex of interactions.

A Quick Review
Recall from last time that there are four primary phases in each pedal stroke: Power, Recovery, Transitional Power, and Transitional Recovery. Recall also that the foot begins in supination at the start of the power phase and moves into pronation as the foot approaches BDC, it then moves to realign towards neutral during transitional recovery via re-supination.

Similarly, the foot rolls through a range of flexion movements during pedaling that include plantar flexion (toes pointing down) as it enters the end of the power phase/transitional recovery phase and dorsiflexion (toes pointing up) as it moves from the end of recovery to the transitional power phase in an effort to return the foot to its much sought neutral orientation as the cycle begins again.

A Detailed Look
This may read a bit over the top…but please bear with me, for the goal is to give you an insight into pedaling that you may have previously lacked.

The foot is made up of three portions: Forefoot, Midfoot, and Rearfoot. 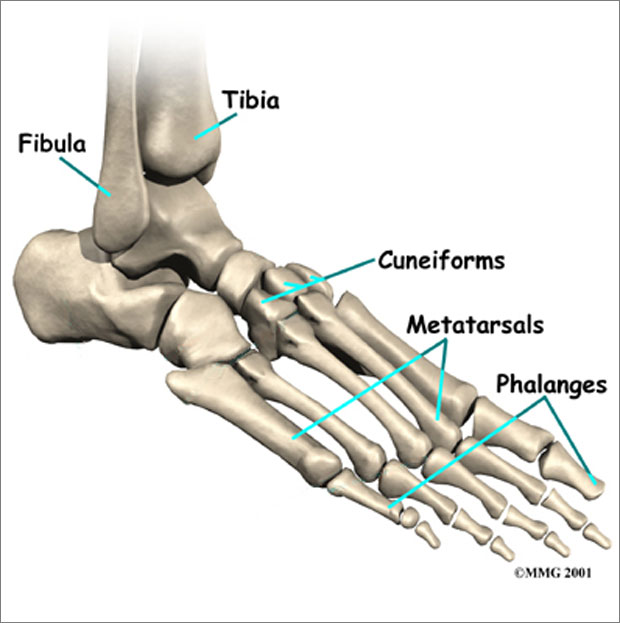 The forefoot is composed of the toes (phalanges in anatomy speak) and their metatarsals, (numbered 1 to 5 from largest to smallest) and bears more than half of the weight in normal walking, while also balancing the pressure on the ball of the foot.

The midfoot is actually a mélange of small bones, five in fact, that form the arch of the foot and act as shock absorbers.

The rearfoot connects the midfoot to the ankle and is made up of the Calcaneus (largest bone in the foot) and the Talus (primary ankle bone). The rearfoot has three distinct joints that facilitate movement. The Talus is connected to the Tibia and Fibula (long bones of the lower leg) to form a hinge joint that allows up and down movement of the foot. The Calcaneus joins the Talus to form the Subtalar joint, which allows rotation of the foot about the ankle.

This anatomy matters because we often think of the foot as a single entity, when in fact there are a variety of opposing forces at play during the pedal stroke. Knowing this anatomy we can now plug in the musculature and biomechanics a bit…

Dr Herring’s Analysis
“Acting upon the foot are the primary pronators of the foot the peroneal longus and brevis muscles opposed by the primary supinator the Tibialis posterior muscle. Promoting stability of the foot medial column is the personal longus muscle which is anchored to the proximal base of the first metatarsal (approximately mid-arch) and is opposed by the powerful tibialis posterior muscle.

The ankle which is typically oriented in a slightly dorsiflexed position, for most cyclists, at TDC begins to plantarflex in the power phase under the influence of the soleus muscle and often is continued past BDC by the action of the gastrocnemius muscle and the flexor hallusis longus muscle. The tibialis anterior muscle plays a key role augmenting the transition of the foot from the bottom transition phase to the pull phase of the pedal cycle.

The effect of the calf muscles and the deeper flexor hallusis longus upon the ankle joint is important to the transfer of power from the leg to the pedal and drive train of the bike. These muscles perform to (1) resist hip and knee extension forces through a stabile ankle, (2) provide propulsive power especially during the later stages of the power phase and (3) places the foot in a neutral to slightly plantarflexed position at BDC augmenting the ability of the hamstring muscles to carry power across BDC into the recovery phase of cycling.”

So you can see that the ankle, foot, and lower leg musculature work in concert to generate force, but how is that force applied?

Pedal To The Metal
Researchers Gregor and Okajima observed that the most effective transfer of power from the foot to the pedal/drive train occurs when the force (e.g., the foot) was applied perpendicular to the crank arm throughout the entire pedal stroke – primarily in the power and early transitional recovery phases.

Dr Herring picks it up here: “Pronation of the foot occurs during the power phase of cycling. As force is applied by the extending leg to the foot the resistance of the pedal and drive train triggers the foot to pronate. This action leads to an “un-locking” of the structural integrity of the foot leading to eversion (rotation/movement away from the midline), dorsiflexion and abduction of the forefoot. This may result in a Subtalar eversion moment of the rearfoot at BDC. Increased lower extremity muscle activity is triggered to stabilize the foot and decelerate further pronatory motion robbing the power phase of forces useful to carry the pedal cycle into and through transition phase of the pedal cycle.”

If we can change this tendency we can immediately increase efficiency, meaning you get more out of the watts you produce.

The Payoff
Eversion at BDC, via pedaling, is a common problem so the question becomes how do we minimize the impact? Modern fit technique often defaults to a varus or valgus wedge to try and compensate for either a structural predisposition, or to simply “fill the space” so that the MP joints contact the pedal axel evenly. By stabilizing the foot as it interacts with the pedal we are able to keep the foot more neutral and minimize eversion at both forefoot and rearfoot, but there are other considerations as well.

As Dr Herring notes: “Translocation of the knee in the transverse plane in mid to later moments of the power phase occurs as the knee extends. This motion is dependent upon pelvic width, Q-angle and the pedal – crank arm width. Typically as the knee extends it moves closer to the bicycle since the foot is fixed to the bicycle by the pedal. This is one problem that wedging attempts to fix. Excess Q-angles can further perturb the adduction of the knee during the power phase and may represent a significant contributing factor to overuse injury of the knee. Furthermore, abnormal function of the vastus lateralis and rectus femoris may further contribute transverse plane abnormalities by displacement of the patella too laterally when opposed by a weak vastus medialis muscle.”

Additionally it is advisable to have the athlete focus on dorsiflexion of the foot as it moves from through the recovery phase and into the transitional power phase, again in an effort to keep the foot neutral as a natural performance enhancer!

Dr Herring notes “The recovery phase of cycling serves to realign the lower extremity. The limb moves from BDC to TDC as the hip and knee flex, the ankle dorsiflexes and the foot resupinates. A cyclist that ride with cleated shoes and pedal systems may use the recovery phase as a power generating phase to augment forward propulsion of the contralateral limb. Under these circumstances the recovery phase limb is acted upon by the hamstring and gastrocnemius muscles. Late in the recovery phase the anterior tibial muscle will begin to dorsiflex the ankle while the quadriceps muscles continue to flex the hip and begins to extend the knee.

Extending these thoughts one step further we can postulate that the introduction of a foot orthoses (be it wedge or footbed) may increase the overall stability across the spectrum, resulting in better performance for less work. This is basically an extension of what Nigg et al said in their the Preferred Movement Pathway Theory which attempts to describe foot orthoses performance based upon a complex sensory feedback loop which serves to modify muscle activity.

A fundamental premise of this theory centers on the changes observed in muscle activity when foot orthoses were introduced. Nigg et. al., observed that the joints and muscles of the foot exhibited a preferred movement and activity pathway. However, when foot orthoses were introduced, joint movement pathways persisted but muscle activity was minimized. Through a proposed sensory feedback loop the foot orthoses served to tune the muscles and there by dampen potentially harmful soft tissue vibrations.

Summary
This second article on the role of the foot in pedaling lays out the basic anatomy and biomechanics of said movement and attempts to understand the forces at work. Essentially the foot is composed of three different segments that sometimes work in opposition as a result of the force requirements. By attempting to maintain the neutral orientation of the foot throughout the pedal stroke it is possible to increase efficiency. Often this is accomplished by use of either footbeds or wedges. Nigg et al has shown that use of a foot orthoses resulted in improved movement pathways with less total energy required! In the end, it is these small efforts that can often make the difference between winning and losing. Would you benefit from a reinvestigation of your own foot / pedal interface?

A challenge for all in the Baloise Tour of Belgium