Cycling Training: Last week Matt wrote about taking a long look back through your 2013 and even earlier to get the big view of your training progression. Let’s take a case study of using SOAP (Subjective, Objective, Assessment, Plan) to review and then plan for 2014.

Training Log Data
Thanks to the proliferation of heart and power monitors along with tracking software, ranging from TrainingPeaks to Strava, it’s very hard to come up with the excuse of it being too hard to log your workouts. While the numbers are easy to download, many of us still forget the critical additional information, and that is how the workouts felt. So I will second Matt’s advice and remind you that you (and your coach) will get the deepest analysis only if you put in subjective information into your training log.

Information that you might include:
How hard was that workout or race physically and mentally? You might see that you did a workout with 3×10 min at 270 W average from back in May. But did it feel easy to complete or were you flogging yourself to get it done?

Health, sleep, work/life, and general motivation. If that workout was deathly hard, was it because you were getting sick or had some life situation going?

Your actual intended workout, not just what you did that day. This helps you to see the ideal versus reality as you’re planning 2014.

Notes about teammates or competitors. Just like baseball pitchers keep detailed notes about hitter tendencies, you should be keeping note of the abilities and tendencies of both your friends/teammates and rivals. This help with assessing your limiters, to see for example whether you need to improve your climbing or sprinting versus your race category. In cyclocross, it’s good to note whether a rider tends to fade late in a race, are technically great in the corners but slow over the barriers, etc.

SOAP Case Study
At the end of 2012, I wrote an article about how I simplified my training leading up to the 2012 cyclocross season, and how I ended up with my best season yet. Let’s repeat and see how 2013 went using the Subjective, Objective, Assessment, Planning (SOAP) model that Matt outlined.

Enjoy and diversify my cycling, as it was my first full year back in Niagara after two years of vagabond travels. 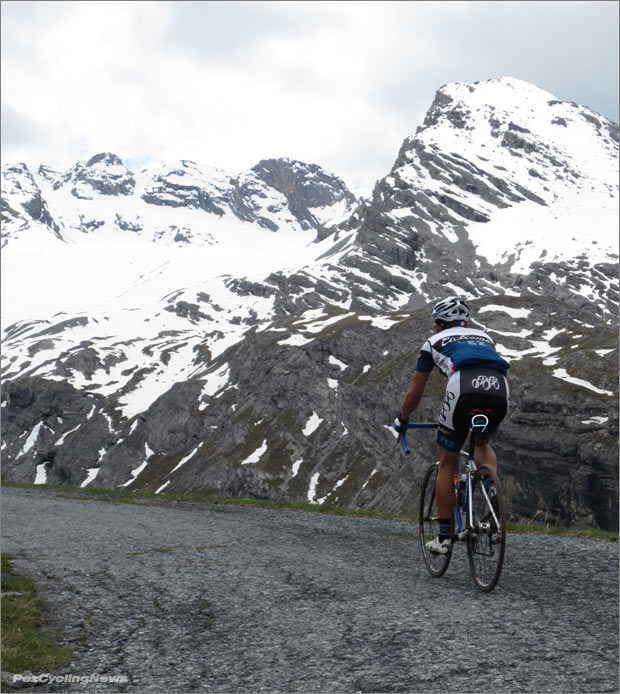 Stevo doing it tough in 2012 during his ‘vagabond’ years on the famous Stelvio pass in Italy.

Subjective
2013 was possibly my most enjoyable all-around year of cycling and racing for a number of reasons:

I really did diversify my riding by getting into a lot of mountain biking. This included finding a new commuting route that was 90% off-road, doing the local MTB shop series, winning a 6-h MTB team relay, and generally becoming a lot more comfortable off-road. This also had spin-off benefits to my cyclocross racing, where I felt much improved technically.

I gained an enormous amount of confidence on the road, due to good fitness and especially an improved race smarts and self-confidence. This was seen in club hammer rides, where I almost always used to fade and let wheels go when the final attacks came. This season, I raced much more aggressively in responding and initiating such attacks, and this change was noted by pretty much all the racers on the club. The key thing was that I turned my brain off from over-analyzing the situation, and instead just went right for the wheel. Removing that half-second of hesitation and “can I do this?” made a huge difference!

I didn’t get sick once and, unlike most years, I kept travel to a bare minimum. This meant I could pretty much stick to an idealized training plan with minimal disruptions. Also looking through my files and my workout notes, I did not have any parts of the year where I was in a mental funk or risk of non-functional over-reaching. That is, I was always motivated to train and excited about cycling.

Objective
The ‘cross results were pretty promising, as I placed top 10 in the first races of the season in both New York and Ontario until my season was ended prematurely by a strained knee ligament. So I have no doubts that I would have accomplished my primary goal.

I also hit all my secondary goals that evolved over the course of the season, including a top 250 placing (242nd) at the 60 km Paris-Ancaster road/off-road race in April (best was 285th in 2010); and top 20 overall (20th) out of about 75 in the local MTB series, finishing just behind the top grouping of specialist MTB racers in the region.

I rode 3 centuries (the back-to-back 180 km a day Rideau Lakes Cycle Tour in June and the infamous Highlander Century in September) and felt super-strong in all of them despite rarely exceeding 100 km on any ride all season.

With free time in early May, I put together a 5-day hard training block averaging 150-200 TSS a day, then took time to recover from it. So I can handle an acute training load (a weighted mean of the past 7 days of training in TrainingPeaks) of at least 175-200 if I plan things well. This backed up my 2010 (fall training camp) and 2012 (Pez 10th anniversary climbing festival), where I took a few days easy afterwards and then saw a huge bump up in my fitness.

My chronic training load (in TrainingPeaks, a weighted mean of your last 42 days of training), peaked at 95 for a few weeks in July and again in September.

Assessment
So putting it all together, what were things I learned about myself and what works for me?

I have a large aerobic base for endurance events. As has been the case with pretty much every century I’ve ridden, I seem to ride OK the first 100 km, and then have a feel-good switch flip on about 120 km in each time. This was especially the case at the Highlander, where I started riding away from my group in the final 50 km of the very hilly (>3,200 m) ride. Analyzing my power files, I was able to keep essentially identical wattages on the late climbs (240-250W, or right at my FTP for 5-10 min efforts) as on the early climbs.

While my endurance is good, my absolute all-out short-term power (e.g. 1 min power) remains weak. But my improved race smarts and self-confidence in immediately going with attacks helped to compensate for it.

My first laps in cyclocross races remain weak. I can get into the front group over the first segments of the lap, but usually get gassed and passed halfway through the lap. I then spend the bulk of the race chasing and passing to get back into the top 10 positions.

Having other goals in cycling and having fun things going all year, rather than banking everything only on the cyclocross season, allowed me to have a great 2013 season despite having the ‘cross season cut short by injury.

I can contend for consistent top 5 finishes in my Masters 2 category in my ‘cross racing in 2014, and consider aiming to upgrade to Masters 1 over the season.

I aim to target all the local MTB series, relays, and races. The main limiters are more technical than fitness, so the plan is to spend a lot more lunch hour rides in the awesome series of technical trails around my campus at Brock.

Following Seldo’s lead with all his great racing performances in 2013, I’m also aiming to tackle a full road season in 2014. Not having raced much on the road the past few years, I don’t have too many references, but am aiming for at least one top 5 placing.

Summary
All the Strava updates and data downloads are great for bragging rights, but to be put to best use, you need to supplement data logging with good and honest subjective notes. And at least once a year, it’s vital to do a detailed analysis of where you’ve been so that you better know how to get to where you want to be. Note how I have not just restricted my analysis to 2013, but have used this year’s data to confirm or track my progress from prior years. This enables me to see where I really am strong, where I have improved, and what needs working on next.

Have fun and check back in a year to see how I’ve done with my planning? Happy 2014 to all!

Stephen Cheung is a Canada Research Chair at Brock University, and has published over 60 scientific articles and book chapters dealing with the effects of thermal and hypoxic stress on human physiology and performance. Stephen’s Cutting-Edge Cycling, a book on the science of cycling, came out April 2012, and he can be reached for comments at [email protected] .