“Analytics” is the buzzword in many sports today, involved new ways of analyzing player effectiveness and team performance in dynamic team sports like baseball, football, and hockey. Being wattages and power analysis, can we use analytics in cycling and especially in sprinting?

Data Crunching
More than most endurance sports, cycling is heavily involved in detailed analysis of training and performance. This is heavily assisted by the advances in measurement technology such as heart rate and especially power meters. Whereas the bicycle’s continuous motion and power transfer makes it easy to place a power meter, this is much more difficult in other endurance sports such as skating, running, and rowing.

As a result, we’re spoilt for choice in both power meter hardware and analysis software. Post-ride coffee shop talk now just as much revolve around bragging rights of FTP, TSS, and maximum power outputs as it once did around speed.

Power has also been proposed as a tool in anti-doping, specifically “extraterrestrial” power outputs or power-weight efforts, or sudden large upward spikes in power data. Certainly, a minor firestorm was raised when some scientists and non-scientists tried to reverse-engineer power data based on times up climbs along with a whole host of assumptions about rider/bike weight, wind speed, etc. 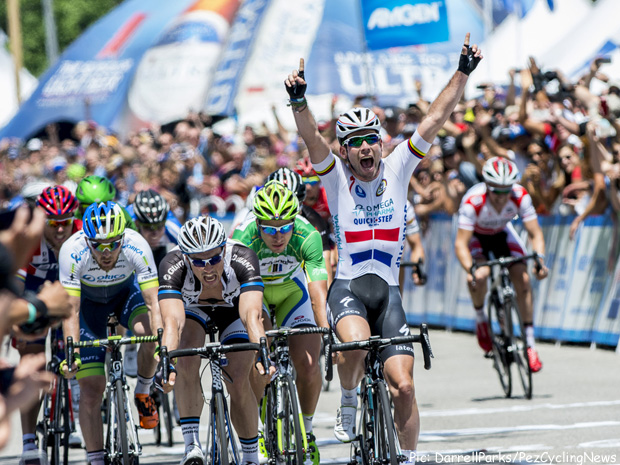 Can the madness of a bunch sprint be effectively analysed?

The Evolution of Sprinting
In Grand Tour racing since 2008, about the safest bet going has been that, if it’s remotely a “sprinter’s stage” and Mark Cavendish is there, he’ll be the one throwing his hands up in victory at the line. Cav’s success has caused wholesale changes in the way racing is done. First, the High Road setup has taken what Cippolini and Petacchi started with sprint trains and perfected it to a science and high art. This has been copied by many sprinters, notably Giant-Shimano for Marcel Kittel.

And tactics for sprint and moderate mountain stages has changed to focus on getting rid of the sprinters or their lead-out riders before the line, or at least tiring them out as much as possible beforehand.

Advanced Analytics
Power is great for training and for some uses in racing, but it remains just one way of quantifying, analyzing, and predicting performance. Road racing is unlike time trials and triathlons in that you’re competing against others rather than the watch or just the course. This brings with it a huge degree of unpredictability to the outcome.

Racing is more than just power output, and the tactics are what makes it such an intriguing sport. In the International Journal of Sports Physiology & Performance, my friends Chris Abbiss and David Martin contributed to a study by Paolo Menaspa analyzing the tactics of 60 Grand Tour sprints. The data is intriguing in its own right, and points to a way for teams to plan their strategy and tactics to give their sprinters the best chance for success.

Menaspa et al. 2013
The study is a case report on one particular cyclist. The rider in question isn’t specifically named, but even the most casual of cycling fans can guess that it’s Mark Cavendish. The study was an observational study that didn’t rely at all on power outputs or any actual data from the cyclist. Rather, the data input came from the course profile and helicopter coverage of the sprint.

• 31 stages video-analyzed for: average speed for the final km; sprint duration; position in the bunch; and teammates remaining at 60, 30, and 15 s to go.

As you can see, a lot of the data is simple to find and in the public domain, so there’s no need to demand that a rider or team release their power data or training files. That’s not the purpose here anyway, and the point is to see what makes a particular rider tick.

This study also highlights what I always tell my students: good questions trump all! Namely, if I was a team manager or DS, these kinds of questions are exactly what I would like to ask to improve my odds of victory.

Breaking Down the Sprints
The results are equally intriguing both for Cav and for those trying to beat him. Some highlights:

In winning sprints, he was closer to the front of the bunch prior to launching his sprint, and had more teammates still with him at 60, 30, and 15 s to go.

No difference in sprint duration or the average speed of the final km between WON and LOST.

DROPPED stages had higher elevation gain (1089 m) than either WON or LOST (582 m), with no difference amongst the latter.

Summary
The lessons for both Cav and his competitors are simple. If you want to win against Cav, get rid of his leadout train and don’t allow him near the front 9 of the pack before he launches his sprint. Easier said than done of course.

Building up this massive database of information obviously somewhat limits such analysis to being retrospective and after the fact. However, a smart sprinter and their team, either professional or amateur, can benefit from asking similar types of questions.

What type of sprint suits you best? A long drag race or a short acceleration off of wheels? How long can you hold your sprint? How much climbing can you handle in a race and still be there fresh for the finale? Do you need teammates? Can you handle multiple accelerations? How many?

If you’ve been racing more than a couple of years, you probably have a good feel for these answers already. But this is where a mix of both your own personal data and breaking down sprints you’ve done can give you the best odds for future success.

I’ll be an invited speaker at the 2nd World Congress on Cycling Science, sponsored by the UCI and in Leeds July 2-3 to coincide with the Grand Depart. Should be a great event with many of the top scientists in the cycling world attending. Stay tuned for more details.