Why spend months preparing for an event when all you really need is a few weeks? The reason unfortunately is that it takes more than 3 weeks to create significant fitness improvements, but what if you don’t have months? Can any positive change be made in a shorter period of time and if so, what is the shortest possible time frame?

Hitchhiker: You heard of this thing, the 8-Minute Abs?

Hitchhiker: Yeah, this is going to blow that right out of the water. Listen to this: 7… Minute… Abs.

Hitchhiker: Think about it. You walk into a video store, you see 8-Minute Abs sittin’ there, there’s 7-Minute Abs right beside it. Which one are you gonna pick, man?

Ted: That’s right. That’s – that’s good. That’s good. Unless, of course, somebody comes up with 6-Minute Abs. Then you’re in trouble, huh?

Maybe the hitchhiker from There’s Something About Mary was on to something. Why spend months preparing for an event when all you really need is a few weeks? The reason unfortunately is that it takes more than 3 weeks to create significant fitness improvements, but what if you don’t have months? Can any positive change be made in a shorter period of time and if so, what is the shortest possible time frame?

The Three Week Peak is the 7-Minute Abs of the cycling world
In 2010 I did something that I had never done in more than 20 years of racing. I planned an entire season of training around a single day peak, the Philadelphia International Championship. In past seasons, team requirements have had me racing almost constantly from February through September and sometimes even as late as November. I was able to plan my peak for certain crucial blocks of the season but I never had the luxury of banking it all on one day.

Between fatherhood, coaching commitments and directing responsibilities with the Adageo Energy Pro Cycling Team, it was not practical or even possible for me to race every weekend. I did an early peak for the San Dimas and Redlands stage races in May, took a bit of time off the bike and then ramped up for Philly at the beginning of June. Although I had never done anything quite so specific before, it worked out perfectly. I hit my stride a few days before the race and came to the line on race day 100% prepared, not just with my best fitness of the year but with a very specific fitness to the exact race that was ahead of me.

But now it’s the middle of June and I have to decide what to do next. Retirement was one strong possibility but after the good ride I had in Philly, I was tempted to eke out one more big race. Looming high on the horizon was the 9,500 foot Snowbird Ski Resort, the mountain top finish of the final stage of the Tour of Utah, a mid August event billed as the toughest race in America. How can you say no to that?

So with 10 weeks between the two races I had to determine the best strategy for taking the peak fitness I had in early June for a one day classic and carrying it into the fitness I would need for a 6 day stage race almost two months away.

And this is where the 3 week peak comes in. I sat down at the computer and worked out a plan that would address all the important performance factors necessary for a race like Utah which include strength, endurance, speed, power and mental acuity. Knowing the heavy work load that lay ahead of me in terms of preparing the team for Boise, Cascade and finally Utah as well as the general mental and physical toll that a long and stressful season had taken on my mind and body, I packed it all into the shortest possible time frame.

The first thing to understand is that this plan is not about improving fitness. It’s about taking what you have and making the best of it. Let’s start by assuming that in mid June most American bike racers are in the situation I was in. The position of having all the base that they are going to have for the remainder of the season. If you don’t have it by the middle of June, you probably are not going to get it. So instead of thinking about improving fitness, you should be thinking about maximizing what you already have. Three weeks out from an important event is not a time to think about improving your endurance or building strength. The first step of this plan is to accept your current level of fitness and start to figure out what you can do with it to make race day as successful as possible. 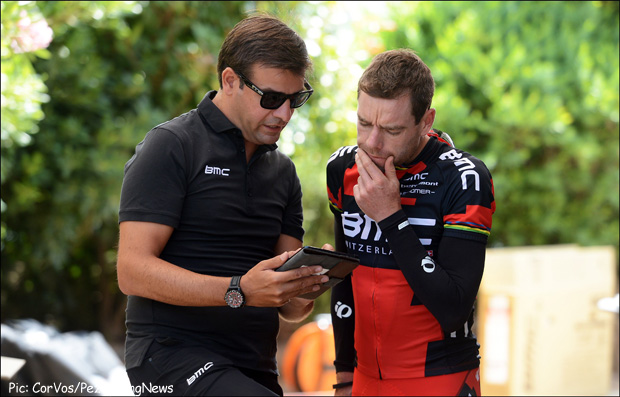 Adding by Subtraction
In my case, the first step was actually to lose some of my peak fitness. It is just not possible to hold a high level of fitness for such a long time (although Eddy Merckx might beg to differ). Since I didn’t have any races planned between Philadelphia and Utah, I immediately took two weeks completely off the bike (not counting a quick outing at the Manhattan Beach Grand Prix). The theory is that the higher the peak, the lower the valley. Since the valley that follows the peak is inevitable, it is better to control it so that it comes at an acceptable time, in this case, in between two peak races.

After a well deserved and highly appreciated time off the bike, I began my 4 week peak towards Utah.

Week One
This is a strength and endurance week. Not so much to build muscle or base fitness but to kick start and activate what you already have. This is going to be one of those weeks where you wake up a little early to get those extra miles in. I cheated a bit by doing Week One twice but you can get away with just one long week. For me this meant a 25 hour week followed by a 35 hour week but 10 to 15 hours will probably suffice for most one day races.

I recommend breaking the week down into the following days.

Week Two
Week two is all about recovery except for the final day which can be a short race or a hard group ride. The idea is to get your body into an absolute state of revitalization. There is no such thing as going too easy during this recovery week. It might feel strange taking this much recovery so soon before an important event, especially after only one hard week, but it is key to getting your body into a peak performance state. Take the time away from the bike to focus on recovery nutrition.

Spend the time away from the bike focusing on your mental training. Create 5 affirmations that specifically address mental weaknesses that might have a negative impact on your performance. Create a specific visualization for your event so that you can ride the entire race in your head to absolute perfection. Say the affirmations out loud for at least 20 minutes on every ride and go through the visualization every night two or three times before bed.

For week two I recommend the following breakdown.

Week Three
Week three will consist of very short rides with short bursts of race pace intensity. The goal this week is to activate some of your top end racing energy systems. Activation is different than training. During training you do intervals that stress the body, cause fatigue and force adaptation. During activation you are not doing enough repetitions or spending enough time above threshold to cause serious damage. You are only spending short period of times at peak intensities to get the body ready for race pace efforts and to remind the body what it is capable of when it is in peak condition. During a training session, you may do 4 or 5 sets of intervals but during an activation session you will only need to do two or three.

At first you might find that you are a bit too fresh, especially on that group ride at the end of week two. Your heart rate and respiration may skyrocket uncomfortably very quickly during intense efforts and may take longer than usual to come down. This is a product of being rested, a feeling that most cyclists are not familiar with. As you put just a bit of stress on the body, this feeling will even out and you will find that you can reach very high peaks of intensity and recover quickly as well.

For week three I recommend the following breakdown.

So there you have it. A three week plan that addresses strength, power, speed and mental preparation. All the essentials to reach a peak performance state. Good luck!

About Josh:
Josh Horowitz is an ex-pro who recently retired after a 27-year racing career. He is the owner of Liquid Fitness Coaching, Liquid Pro Cycling, and Ultimate Sports Psychology. His sports hypnosis program, The Ultimate Cyclist has helped thousands of cyclists realize their dreams. Most recently he is the owner and CEO of Broken Bones Bicycle Company, an edgy alternative to the main stream high end bike brands. Their flagship product, The Fracture was tested and ridden by The Wonderful Pistachios Professional Cycling Team (UCI Continental).