With the likes of Carlos Betancur, Nairo Quintana and Rigoberto Uran, Colombia has seen a real resurgence in the pro peloton in the last few years. PEZ’s Nate King went to Medellin, Colombia to get some first hand experience of where these guys train – and no surprises – it’s far from flat!

Words and pics by Nate King

“Inspired by Climbing”, reads the slogan printed on the bus of the ostensibly national cycling team, the eponymous Pro Continental outfit Team Colombia. The phrase isn’t a farce.

In Medellin, one of the pulsing hearts of Colombia (and of the sport in the South American country), climbing isn’t just an option – it’s required. Even to an outsider, one who lives in another mountainous metropolis, the sheer volume of vertical ascent racked up daily can become mind-boggling. Within a week, I found myself scoffing at rides with under 1,500m of elevation gain. Coffee rides, really. What kind of suffering can one find immediately out of Antioquia’s urban center? Here’s a quick sampling: 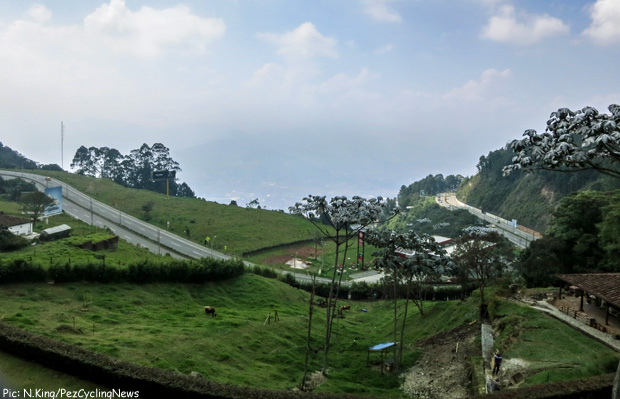 Las Palmas
If the climbs in Colombia are dinosaurs, Las Palmas, or as it’s commonly known, just “Palmas”, is the Tyrannosaurus Rex. Famous, feared, mean, and with some minor design challenges. It’s imposing, rising 1000m over 16km from the base in the posh San Diego/El Poblado neighborhood to the hamlet of Las Palmas at its summit, an average of 6%, but with plenty of flatter spots and steep pitches near its 2500m peak. A four-lane divided highway, drivers are overwhelmingly courteous and give plenty of room to riders laboring their way to the top. 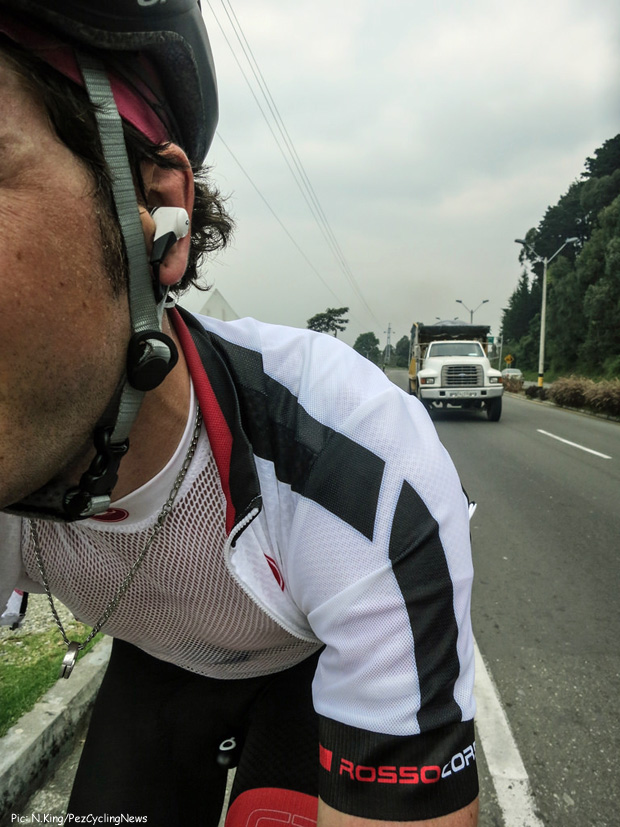 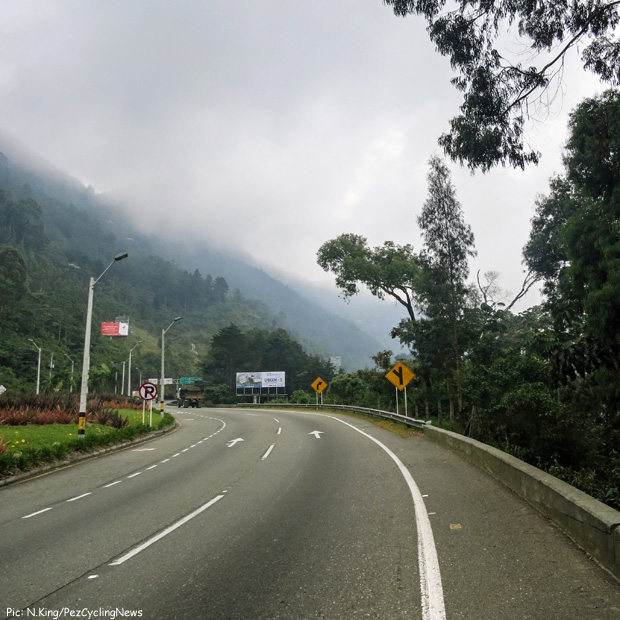 On an early Sunday morning, it’s not uncommon to see upwards of 300 cyclists surmounting its steeps. The views down onto Medellin and Envigado are hard to beat as the road skirts the ridgelines of the valley below. 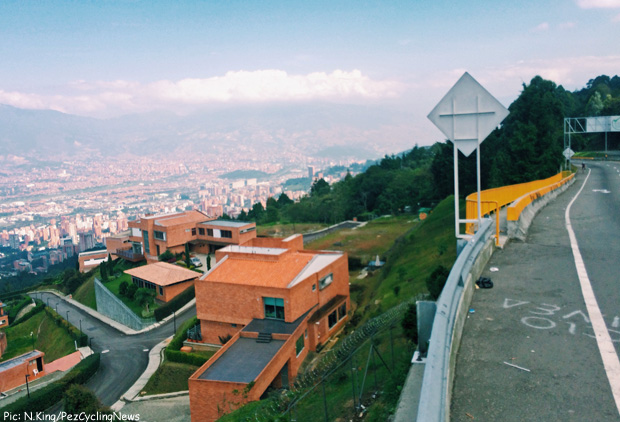 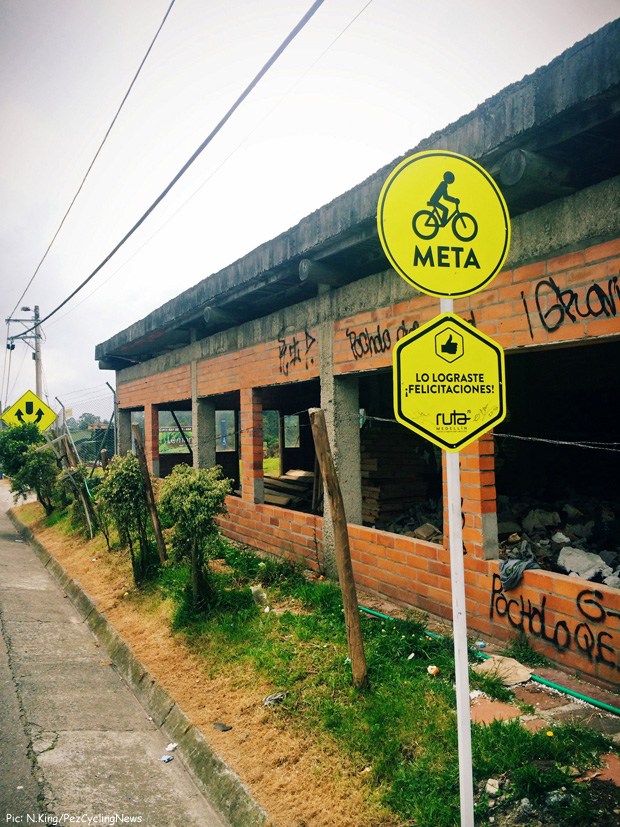 There are cycling-specific markers at each km to let you know how badly you’re sucking.

While not the largest or steepest climb locally, it accesses the Oriente, a high mountain valley and cyclist’s playground immediately to the east of Medellin. Palmas is usually a precursor for a long day of pain. Find it here on Strava. 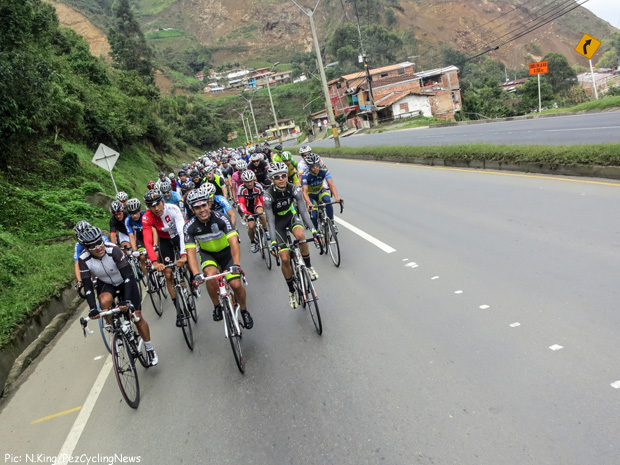 El Autopiste Medellin – Bogota
Also known as the Alto de la Virgen, the Autopiste is the less-painful way to climb into the Oriente. It’s a freeway, designed so that large trucks can make the ascent from Valle de Aburra without blowing headgaskets. It lacks the steep pitches of Palmas, and is one of those “as hard as you want to make it” climbs, with an average gradient of 5% over 16.5km and 836m of vertical. 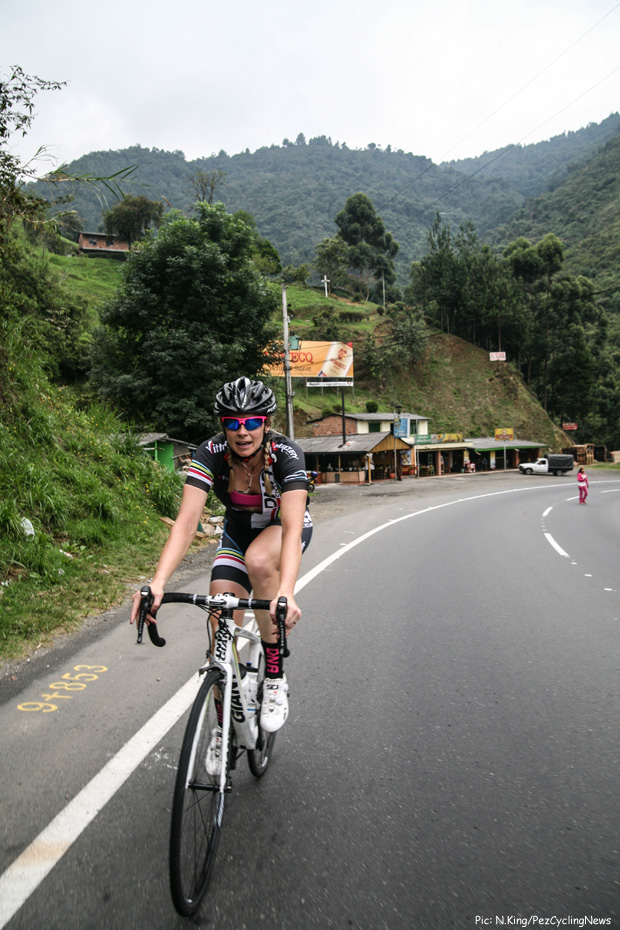 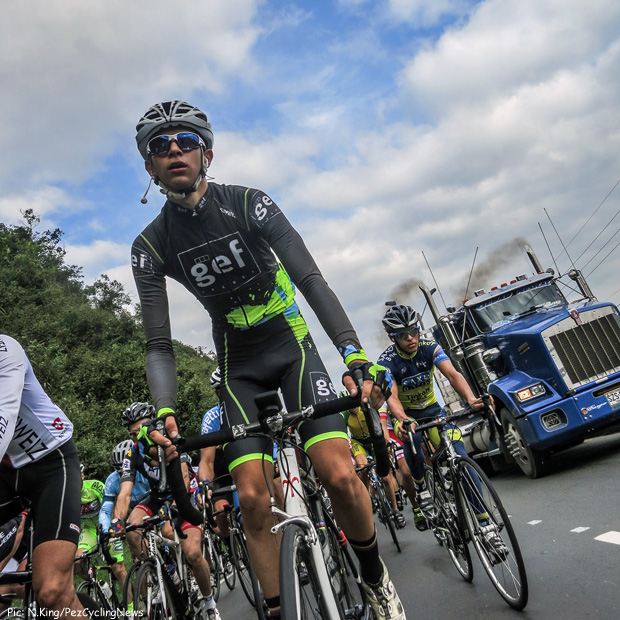 Weekday mornings are an excellent time to spot Colombian professionals doing interval workouts on the upper reaches of the climb near the short tunnel at the 12km mark. It’s the least-scenic and most-trafficked of all the climbs in Medellin, but the views will still leave most gringos in awe. 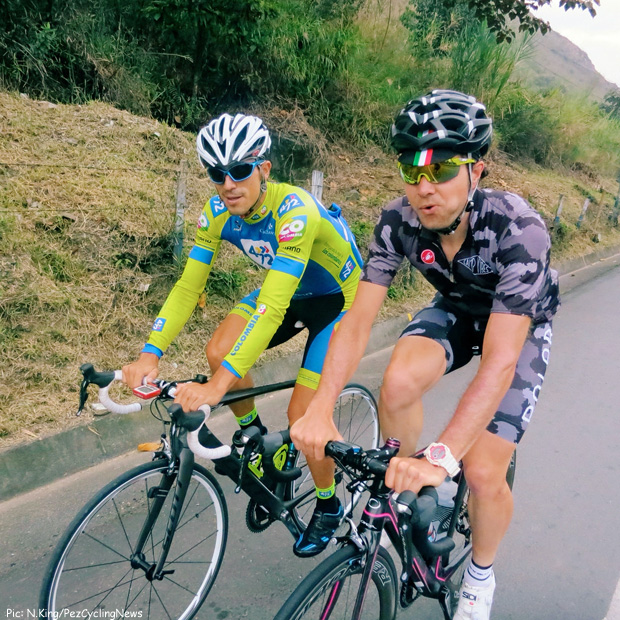 Nate (r) training on the Autopiste with local pro, Juan Pablo Villegas who would go on to win the 2014 Vuelta Mexico just three days later. 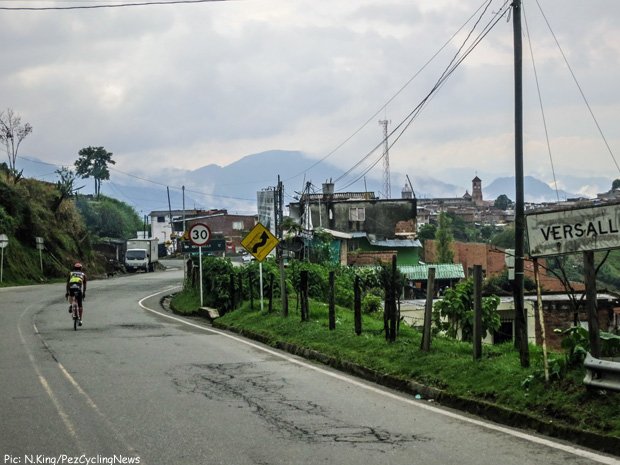 Alto de Minas
In terms of sheer vertical ascent and length, this is the second-largest climb in Colombia right behind the legendary Letras. Forewarning: This is not a short ride. It requires first ascending “Minitas”, or “Little Minas” from the southern suburb of Caldas, a 9km category 2 grade, and descending to the steamy jungle climes of the town of La Pintada at 700m above sea level. The return trip to the 2450m summit is 42km long and traverses numerous climatological zones. 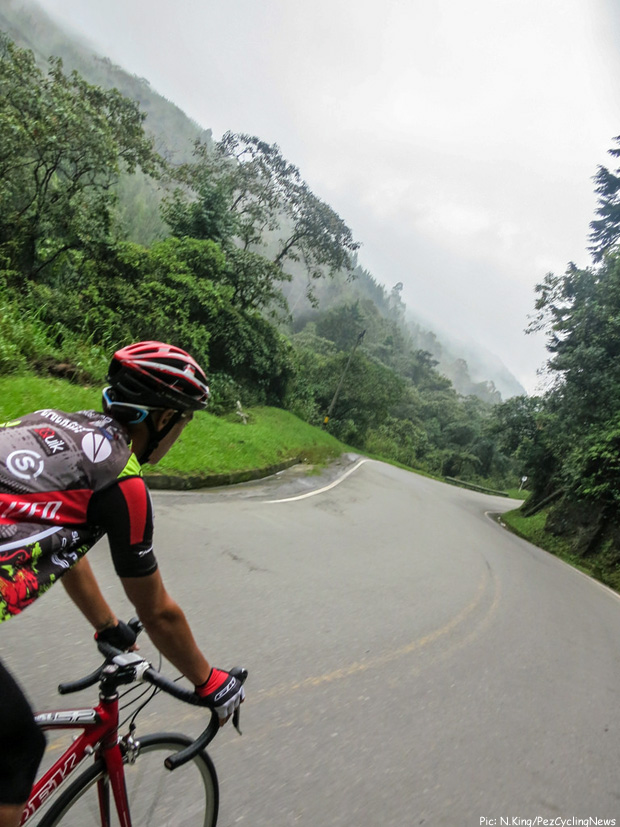 Colombia is equatorial, and temperature is elevation governed – a rather unique and jaw-dropping phenomenon on climbs. The 4% average grade features several steeper segments, but is generally more taxing than anything. The key to making it over Minas without contemplating suicide or attaching yourself to a truck is pacing. Stay within yourself – this is not a short climb, and takes well over 2.5 hours at a good clip. 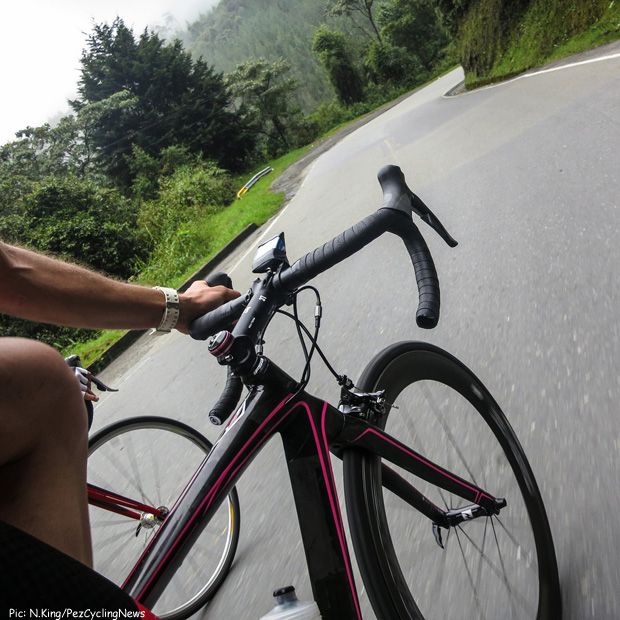 There are plenty of points along the route where one can stop and take in the incredible views, or a pastry. The road follows the contour of a ridge dotted with pueblos, and the drop-offs on either side of the ridge are awe-inspiring. Be ready for serious beauty. Get the details here. 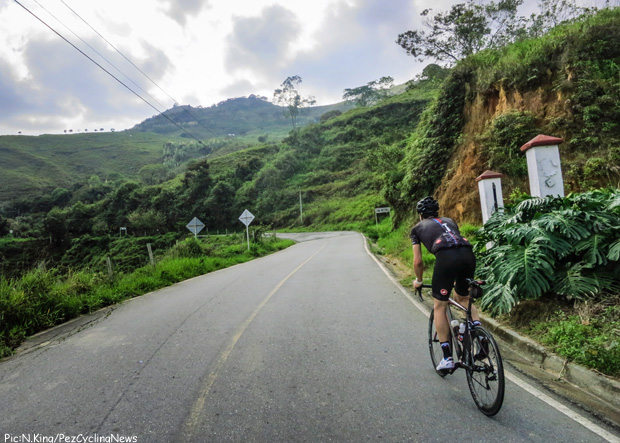 Lomo del Escobero
Lomo del Escobero is one of those climbs you use to play a trick on your friends. It’s like that scene in numerous horror flicks where lead characters ask for directions at a derelict gas station, and instead of heading to relative safety, end up in a situation involving homicidal brain-eating zombies. For me, those directions came from Google Maps. I’d missed the group ride, because like a gringo, I’d gotten lost. Like a gringo, I pulled out my phone to locate the best way to get my solo ride rolling. And like a gringo, I saw a road leading from the tranquil suburb of Envigado to the top of Las Palmas (of aforementioned fame). And finally, like a gringo, I proceeded to ride said road. Later, I would discern that Escobero frightens pretty much…everyone. 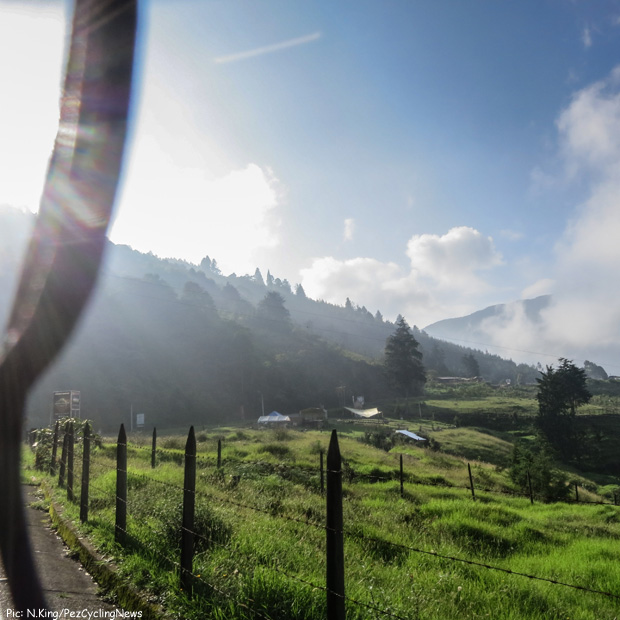 Even the strongest racers in Colombia eschew its insane gradients. It rises from Envigado to Las Palmas in just 9.6km with a leg-searing 960m of vertical ascent. This translates to an average grade of 11%, with pitches between 20-40% in spots. It’s a nice “I did it once” kind of climb, and close to number one on my “hardest climbs ever” list. It is, however, insanely pretty. If you can manage to ignore the fact that everyone else you see on the hill is on a mountain bike with a 22-tooth chainring (my misadventure brought a 39 with a 25-tooth max rear cassette) and the grinding agony in your legs, you’ll notice the absolute lack of traffic. The tunnel of dense foliage you’re suffering through. The sheer grandeur of Colombia. Which is good, because this climb never ends. Maybe it’s the walking pace that only a 30rpm cadence can provide. Maybe it’s the pain. Or maybe it’s seeing the paint on the road and realizing that people have raced up this hill. You will be grateful when it’s over. And maybe a little proud. 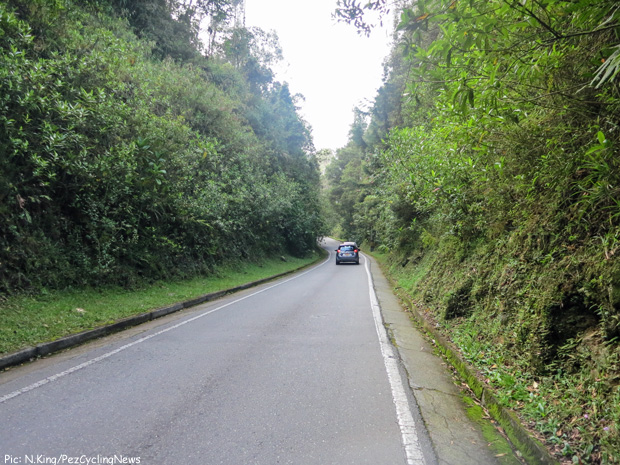 Sometimes gradients are hard to capture on camera but trust me – this climb ain’t easy!

This a very brief, and incomplete list. Antioquia is laden with incredible climbs, more than I’ve found in any other location in the Americas. Utah, Colorado, California, Oregon – they all pale in comparison. If the goal is to rack up sheer vertical, and vertical that will leave an indelible aesthetic imprint on your psyche, this is one of the greatest places on Earth to do it.

Lagutin and Pomoshnikov in top-10 at the Giro del Appennino, Firsanov KOM